Be the most popular boater on the lake with a boat that will draw friends and admirers with one irresistible feature. 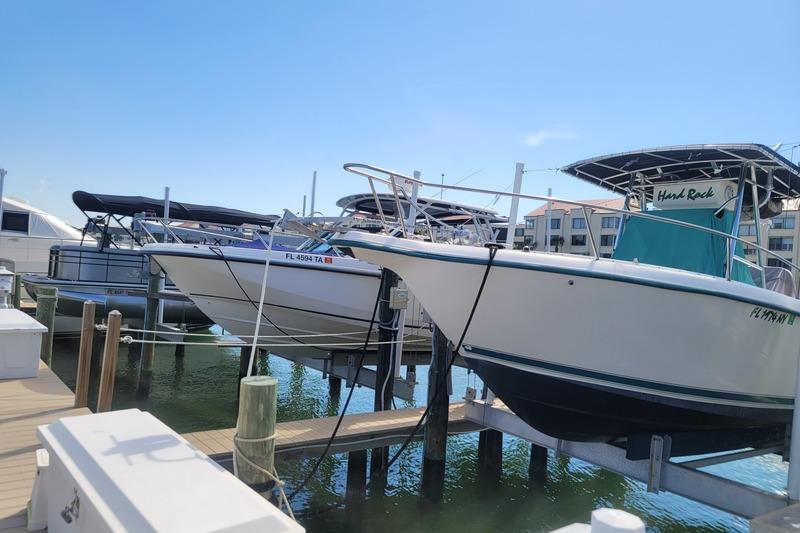 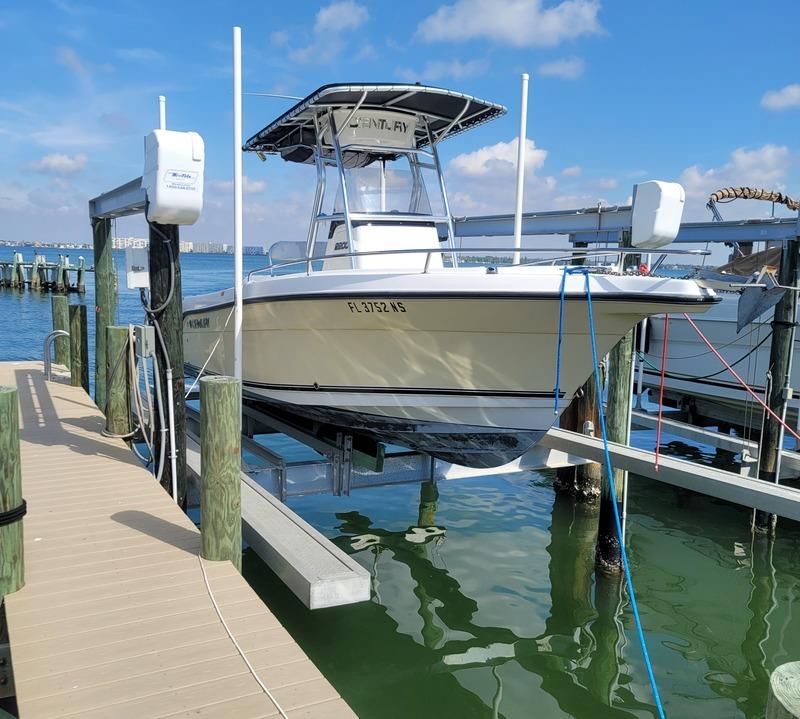 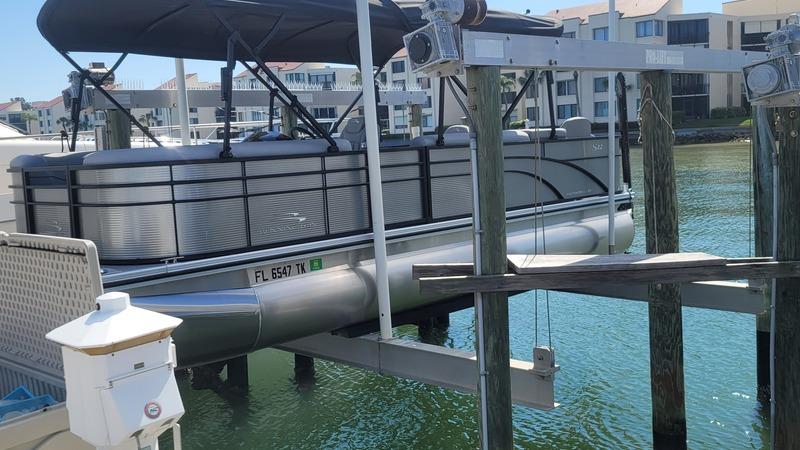 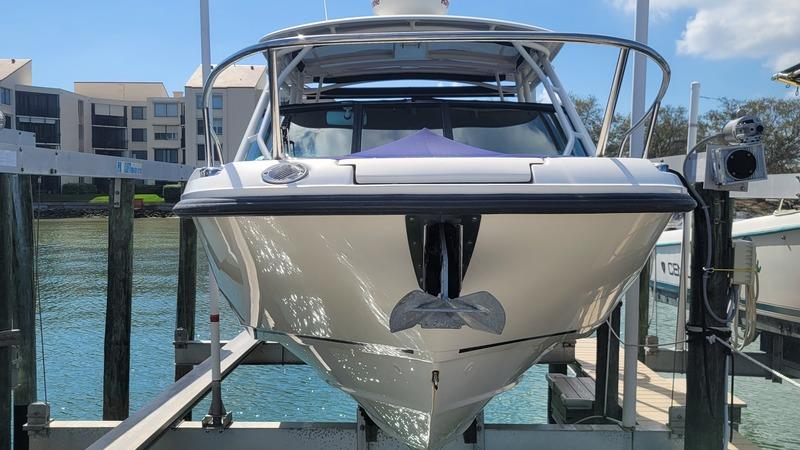 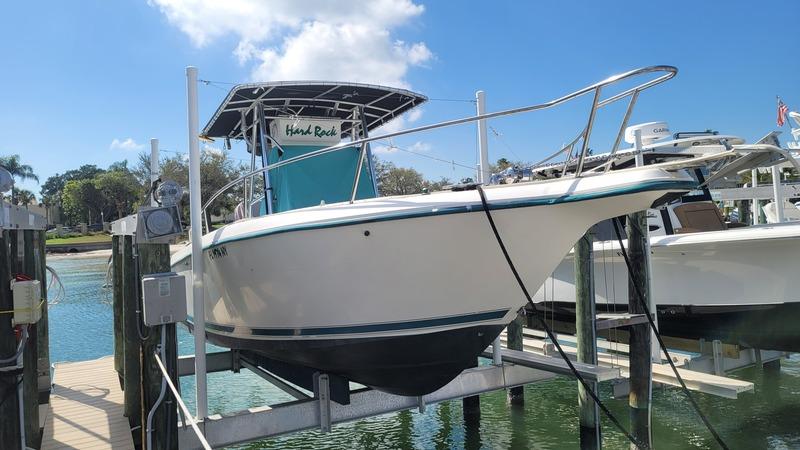 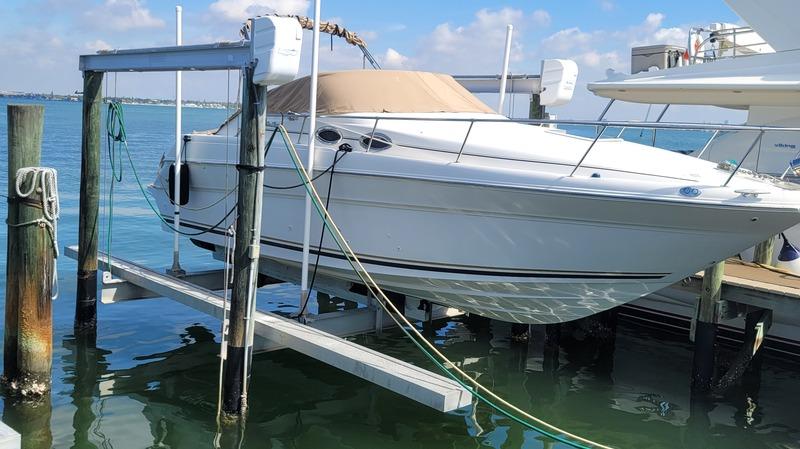 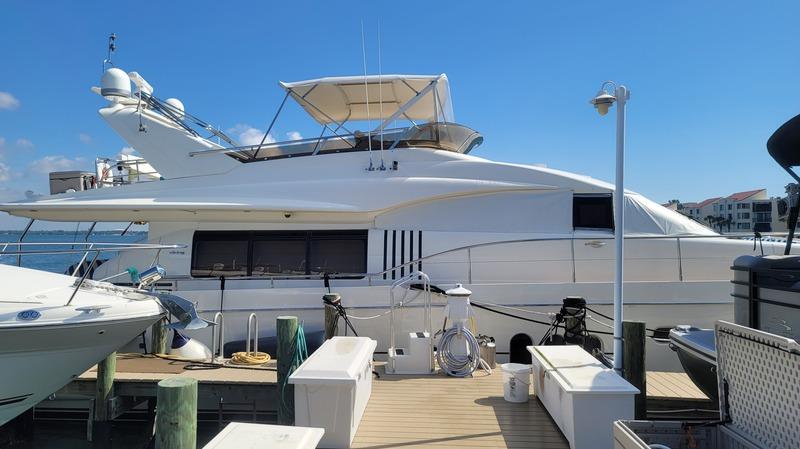 Kids on board most any boat will congregate on the swim platform, jump off, climb back on and and jump off again. Like it says on the shampoo bottle: rinse, repeat. This watery perpetual motion machine will continue unabated until the parental authorities insist they take a refueling break. Good luck trying to enforce the old “no swimming for 20 minutes after eating” rule. Kids of all ages love jumping into the water, and Godfrey Pontoons scratches this itch in a big way with its Aqua Patio 255 SD, a double-decker pontoon whose two-story slide serves as a water park.

For 2019, the Aqua Patio 255 SD features a new, stout upper deck that is rated for four people. But most won’t stay up top for long before taking a downward plummet on the curved slide. A control knob sends lake water down the slide to regulate the friction quotient. For safety, a polypropylene non-skid surface gives wet feet good grip, and snaps allow owners to add carpet or woven vinyl when the slide isn’t in use, to make the surface more comfortable for sunbathing or lounging.

Our test boat featured the Midnight Package ($1,847), which gave it black rails on the exterior of the fencing, black anodized support tubes for the second deck and black corner castings. Also artfully woven in were spiderweb-like metal accents that ensnared the Godfrey “G” logo.

An added benefit to the upper deck is the wide swath of shade it casts below. An optional forward shade ($1,808) puts the lower deck in full eclipse mode, for an air conditioning–like feeling on hot days. Fair-skinned boaters or those who don’t like being slathered in sunscreen will appreciate it for a different reason. But with the upper deck, passengers who want to collect some rays can always take the high road.

Given a second story, a wind-catching slide and a forward sunshade, some concern about performance being affected is understandable, but when it’s powered properly the Aqua Patio 255 SD is a really sporty pontoon. Our test boat featured Mercury’s new V-8 250 FourStroke. Unlike the previous Merc 250, which uses a supercharger on a smallish 2.6L inline-6 to create power, the V-8 FourStroke relies on 4.6L of displacement to provide lots of low-end torque and power in a more organic fashion.

The boarding ladder and ski tow share the swim platform with the slide’s base.

Since Aqua Patio did a good job of designing the forward shade — it won’t balloon and act like a sea anchor — we left it deployed during our speed run, during which the pontoon reached a respectable top speed of 45.3 mph. Out-of-the-hole performance was excellent, with a time to plane of 2.5 seconds and a time to 30 mph of 6.3 seconds.

Aqua Patio will rig any of the major outboard brands, so people can put their favorite choice on the transom. And with the GTP 27-inch triple-tube option ($9,062), buyers can crank up the heat to 350 hp with Mercury, Yamaha and Suzuki (Evinrude and Honda don’t offer one). This option will take the 255 SD’s top speed to well over 50 mph, but I wouldn’t suggest deploying the forward sun shade at such a speed. Aqua Patio also offers boaters who live on smaller bodies of water — or who want to save some money — a two-tube option paired to an engine as small as 50 hp. A good choice, for anyone going with bare minimum power, is the Yamaha High Thrust T50LB, which can swing a big 14-inch Dual Thrust prop; with it, the price drops to $68,431.

The operator will feel firmly ensconced in a well-built captain’s chair.

Anyone who didn’t look up would swear he was driving a single-deck pontoon. The upper deck doesn’t make it feel top heavy (never run with passengers on top), and when I cranked it into a hard turn at planing speeds, the Aqua Patio 255 SD responded well and carved a really tight turn. In a straight line it tracked well with little input from the driver. I docked it in a pretty stiff crosswind, and the upper deck, ladder and forward canopy didn’t make things too difficult but did change the dynamic a little. Normally, a crosswind will move a pontoon’s bow more than the stern, because it’s lighter, but with this boat’s wind-catchers residing aft, it tended to drift more sideways, which can actually aid docking.

A Simrad GO5 chartplotter and analog gauges deliver a modern and nostalgic feel at the helm.

Obviously, kid and kid-wannabe entertainment is at the top of the list of this boat’s capabilities, but with a passenger rating of 16 with the big-tube option, it’s also up for more traditional parties. Roomy quad lounges in all corners are a good start for seating capacity, and an additional settee to the port side of the driver provides even more posterior planting space. Single-pedestal cockpit tables can be wobbly, so Aqua Patio designers gave the extra-large greywood table an extra leg to stand on. For more snacking real estate, owners can add a second table in the bow ($470).

A wide variety of watersports possibilities are on the agenda if the 255 SD is powered by at least 150 hp and has triple tubes and the cage-style ski tow ($916). A slightly less expensive alternative to the triple 27-inch tube package is the Sport Package ($4,354), which features 25-inch outer tubes and a 27-inch center Sport Tube that provides more lift than triple 25-inchers and gives the boat a pivot point for excellent, lean-in cornering.

One of the biggest questions to answer when ordering an Aqua Patio 255 SD is: bar or no bar? The 255 SDB version replaces the amidships portside settee with a bar surrounded by four stools. Backrests for the seats are a $1,685 option. Adding the bar shortens the portside stern lounge by removing the layback and pumps up the price by $2,885. Godfrey also markets a nearly identical 255 SD in its Premium line of pontoons, which have different fence styling and fewer tube options than the Aqua Patio variant.

Although the standard boat comes well equipped, Godfrey offers options to match every lifestyle and budget. For one-stop shopping to pump up the “wow” factor, our test boat had the Extreme Sound package ($4,539), which includes a six-speaker Polk Audio Bluetooth stereo with a subwoofer all controlled by a Godfrey Touch Screen that also takes charge of the RGB lighting system ($1,062).

Stern passengers can enjoy a conversation in matching settees — this one and its twin opposite it.

Buyers have many ways to present their 255 SD, with a choice of nine rail colors and three zones that can be contrasting colors. Aqua Patio even offers six different interior color schemes, for customization. At the helm, the captain’s chair can be upgraded to an Evolution King throne ($1,070), and an adjustable height pedestal costs $270. A 9-inch Garmin 942xs touchscreen chartplotter/fishfinder can be mounted flush in the dash, and Godfrey offers a digital engine gauge package ($1,500) that includes an engine readout on the chartplotter.

The Polk stereo and lighting control module is really complicated; I wish it were simpler to use.

My family likes to fish and our Sweetwater fishing pontoon only had two logs and a small engine. We also love to entertain, but it only held 10 people. We live on Big Island Pond, which is the biggest lake in southern New Hampshire, so we wanted a triple-tube model. When my wife and I saw the 255 SD, we knew it was the one. My son, Connor, 11, and my daughter, Samantha, 13, both love the slide and also enjoy tubing and skiing; of course, they like to invite their friends. Our new boat holds 16 people, and we love to head to the sandbar and hang out with the other 60 boat families that hang out there. We got it equipped with a grill, and my wife loves that we don’t have to end our day on the water to go home and eat. Rockingham Boat offers the best service anywhere; you feel like you are family. If any boat they sell breaks down, they’ll come out and take care of you right on the lake.