What's better than one bar on a pontoon boat? Two bars. 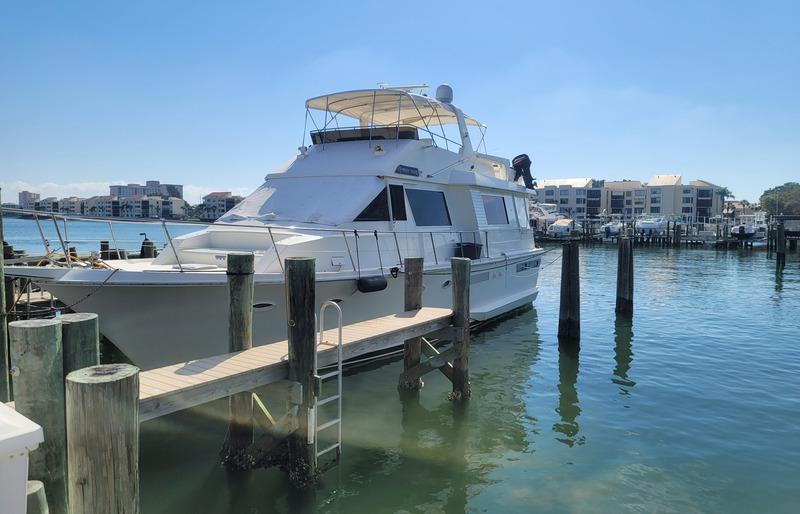 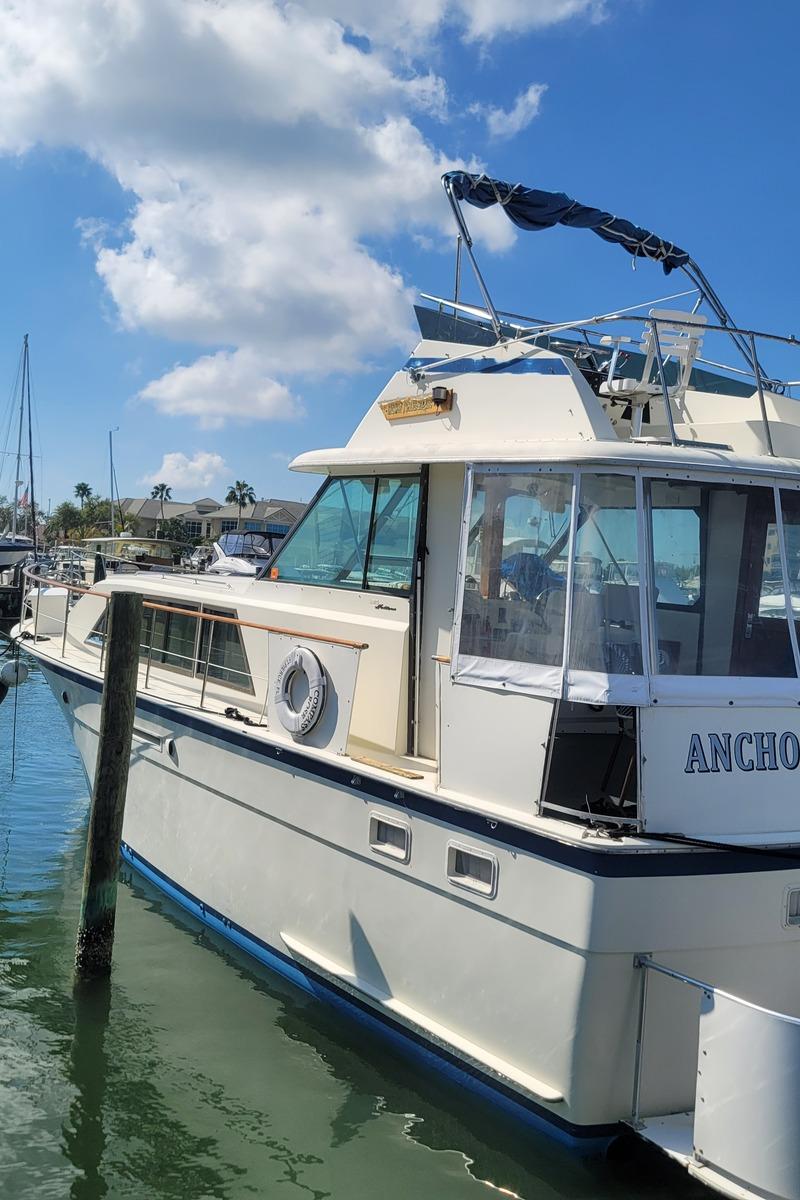 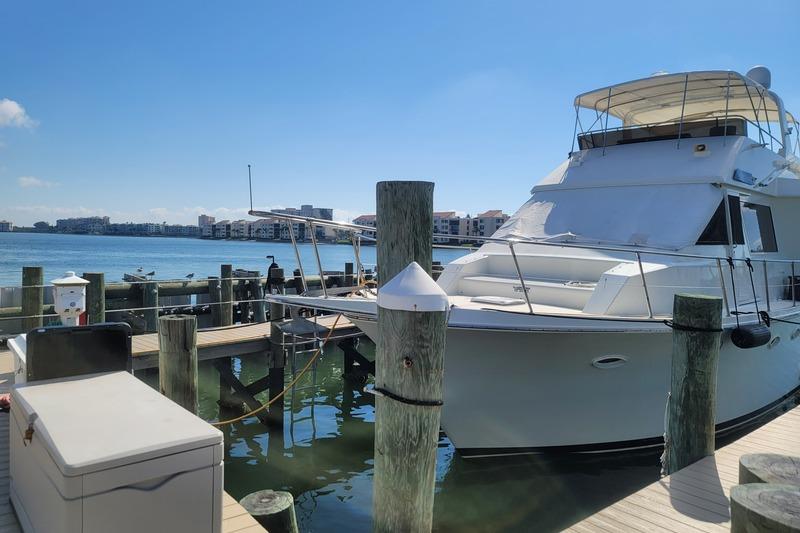 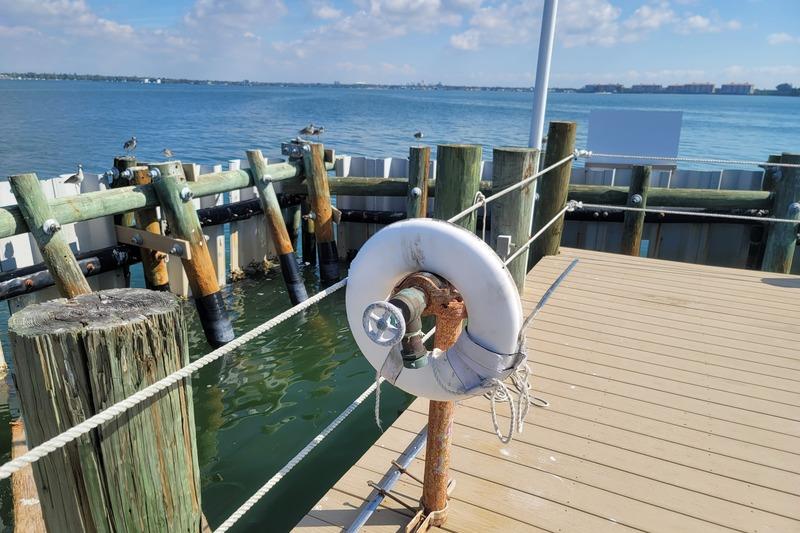 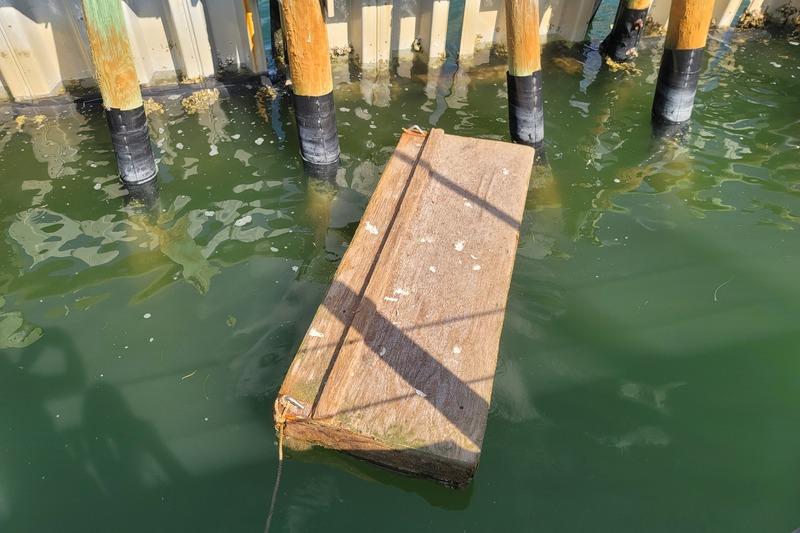 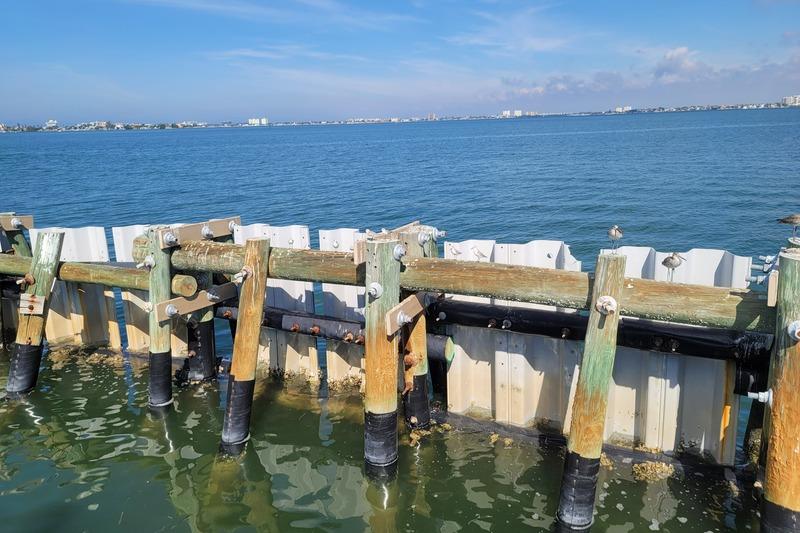 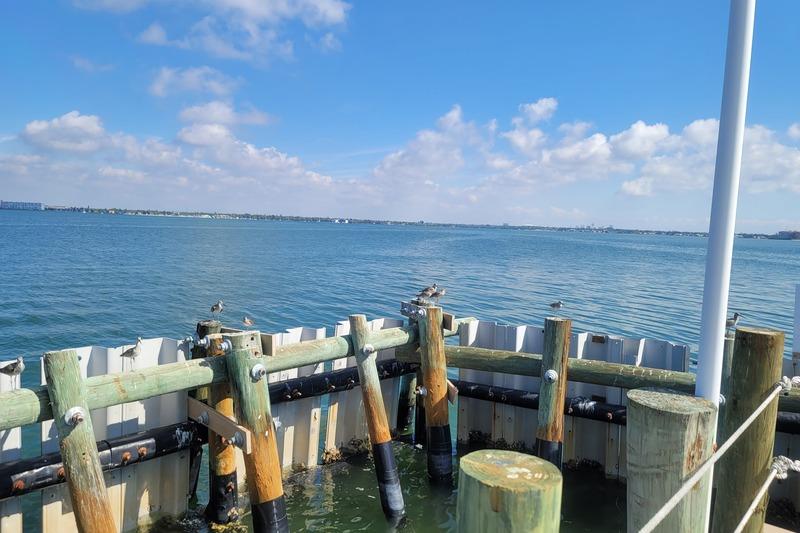 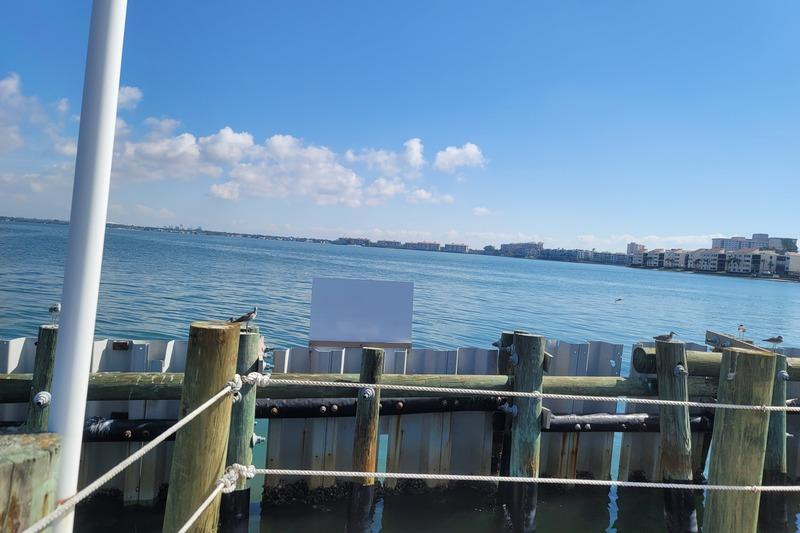 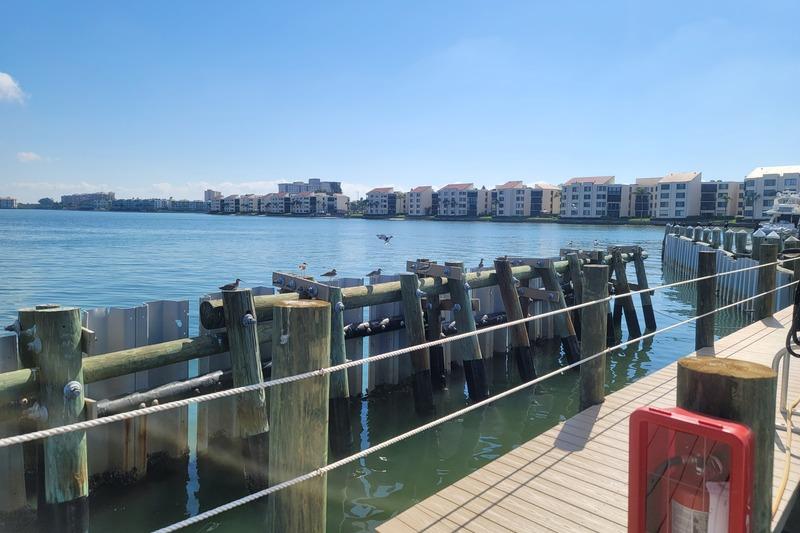 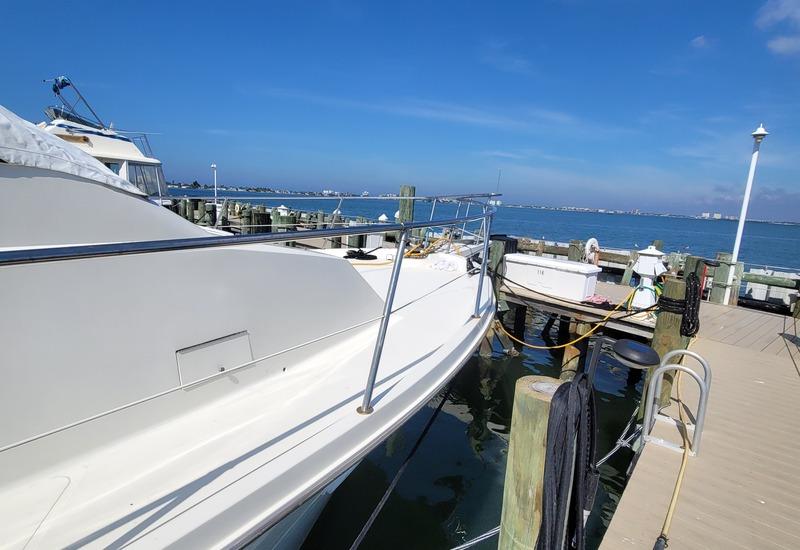 Qwest pioneered the compact luxury pontoon category. Then its designers went another direction, creating the Avanti 825 Lanai Executive DS Bar, the builder’s biggest model ever at 26 feet, 8 inches. The Avanti line is Qwest’s most luxurious and comes with so many standard features, the options list is downright skimpy.

Bar-equipped pontoons are hotter than a ghost pepper these days, but a huge bar can dominate a floorplan and make unfettered movement difficult. The Qwest Avanti 825 Lanai Executive DS Bar takes a different tack. Its floorplan offers two more-compact bars and leaves the cockpit wide open, so guests at an onboard party can mingle freely. Straddling the bars are two pairs of high-back captain’s chairs that feature twin flip-down armrests and can spin 360 degrees. On top of the bars’ working surfaces are twin cupholders and an indent that can secure items such as a cellphone.

A raised edge around the perimeter of the bars acts as a fiddle rail to keep items from sliding off the edge. Each bar module includes a pullout cutting board and a lockable storage drawer. On the sides are a bottle opener, purse hooks and 12v outlets for accessories such as blenders. A Qwest logo cooler resides to port.

Many Qwest employees are pontooners, and a number of innovations have come from their experience using their boat. Case in point is the Swim-Up Bar. When the key is off, the first thing most people do is cannonball into the water to float and swim around “Pontoon Island.” Such exertion can leave crewmembers dehydrated, so it’s always good to have a beverage nearby, and most people park them on the swim platform. But anyone with kids knows they are perpetual motion machines that dive into the water, climb up the ergo-friendly curved swim ladder and repeat, often spilling beverages. To avoid such collateral damage, Qwest designed a Starboard table with four cupholders that attaches to the outside of the pontoon. It even has a little room left over for snacks. Engine paint customization is a hot ticket right now, and matching the cowling’s color to the boat is the most frequent scheme. But it can cost more than $5,000 to repaint it. Qwest takes a less expensive approach by matching its fence colors to popular factory engine colors. Our test boat, for example, featured white fencing that was identical to its white (a $400 upcharge) Honda BF250, a brand Qwest rigs frequently.

The Honda is a techno-showcase for all the innovations its engineers have developed over the decades for the millions of car engines they’ve built. The 3.6L V-6, which is similar to the engine found on the Accord and Odyssey, provided excellent out-of-the-hole performance thanks to BLAST (Boosted Low-Speed Torque), which kicks in when the driver aggressively advances the drive-by-wire throttle. BLAST advances the timing to its limit and enriches the fuel/air mixture to give it extra power at just the right moment. It helped put the 2,825-pound boat on plane in just 2.4 seconds.

Another high-tech assist comes from VTEC (Variable Valve Timing & Lift Electronic Control), which varies the lift and duration of the intake valves to help flatten the power curve and deliver precise throttle response throughout the power band. It helped our test Qwest reach 30 mph in 6.8 seconds and arrive at a top speed of 45.8 mph. Hondas are known for their reliability and are backed by a five-year, non-declining warranty. Our test boat featured the Gen II Triple-Tube setup ($5,850): three 24-inch tubes that are a must-have option for this boat. While the tubes are an inch smaller than standard, the Qwest Avanti 825 Lanai Executive DS Bar actually rides high in the water, because its Dura-Lite composite seat bases keep it lighter than most of its competitors. Another factor that keeps it riding high are six lifting strakes that provide two extra planing surfaces when compared to typical triple-tube configurations that have four.

Our boat was equipped with U-Flex hydraulic steering and power steering ($2,707), which made cranking the wheel easy when I whipped it into a hard turn. It responded well and carved a tight turn. Lifting strakes on both sides of all the tubes kept the boat flat during turns.

The nosecones on the tubes are extra sharp for wave-piercing action that smooths out the ride when it gets choppy. I experienced such conditions on a sister pontoon, a Pro Troll that had the same tube setup, on a gnarly day fishing for walleye on Saginaw Bay off Lake Michigan. The combination of shallow water and stiff winds kicked up steep three-footers that it handled beautifully. The nosecones have oversized spray caps that keep the ride dry and provide the kind of extra lift at the bow that can prevent stuffing when going over a large cruiser wake. Obviously, when a boat has two bars, entertainment is high on the agenda, and the Qwest Avanti 825 Lanai Executive DS Bar makes an ideal venue for hosting a party. In addition to a standard woodgrain cockpit table at the bow, a flip-up table at the rear fence brings to four the number of food display surfaces. The standard stereo is an upscale 200-watt Infinity PRV 315 setup that has six oversized 8-inch speakers, including two rear-firing speakers. Adding the optional 10-inch subwoofer with a 400-watt amp ($993) almost ensures guests will bust a move.

At the helm, the driver can pull double duty as the DJ, using a RAM universal mount to hold his cellphone, which can control the Bluetooth stereo. Capt. DJ is well-compensated for his efforts with amenities such as a refrigerated cupholder that’s powerful enough to turn a warm beverage cold. A Humminbird Helix 5 GPS/fishfinder keeps him informed about where the boat is and what’s beneath it.

Guests won’t have to fight over a USB charging connection for their cellphone, because there are five of them strategically located throughout the boat. The standard configuration is a twin-battery setup, which could be run down by all the jamming, blending and device charging, but Qwest added a voltage sensing relay to make sure the boat’s cranking battery will do its job when it’s time to head for home. The Gen II Triple-Tube package, which comes with an aluminum underskin and a ski tow, makes the Qwest Avanti 825 Lanai Executive DS Bar a watersports boat with the kind of flattish wake slalom skiers love. A centerline ski storage compartment ($1,464) is a needed option, if skiing is in the picture. Qwest builds dedicated fishing models — the 825 RLS Fishtail has twin fishing chairs on the rear deck and a rigging station — but because our test model has four captain’s chairs that are all close to the rails, it could easily handle this mission. Add the optional livewell for even more fishing capability.

One of the touches that makes Qwest’s top-of-the-line Avanti series stand out is the use of Comfort Touch linen-texture upholstery on the layback lounges. It has the look and feel of cloth but is actually durable, easy-to-clean vinyl. The furniture includes an Ultra-Flow storage ventilation system that prevents mildew. In addition to the four captain’s chairs, a pair of identical chaise lounges are up front and a rear lounge is on the back deck for use at rest. Underneath the rear bench is storage that resembles a dock box and is perfect for storing wet items. It also houses the power-steering pump and the pump for the standard high-pressure washdown. The boat comes standard with Diamond Seagrass vinyl flooring, but there are several upgrade options. An optional Power Tower Bimini top ($1,929) adds to the luxe factor. We wish we could get it with a 400 hp outboard, because who doesn’t want to go faster?

My wife and I had never owned a boat before, but we have many friends who are boaters, so we were well acquainted with the sport. With my son, Ryder, getting older, it was finally time to get our own. At first, we experienced a bit of sticker shock and realized we would have to spend more than we thought to get something that met our needs. We were really impressed with the features and luxury of the Qwest Avanti 825 Executive and thought it represented a good value. We almost always have a full house when we go out, and everyone has plenty of room. My son and his friends really like the optional Lillipad diving board and are also into tubing. From the day I met the folks from D&R Sport Center, I was really impressed. I went to a second boat show to check out the Qwest again, and they had tickets waiting for me. During the sale, delivery and service afterward, they have always gone above and beyond my expectations.