Avalon spreads some of its ultra-high-end luxury to its midlevel Catalina line. 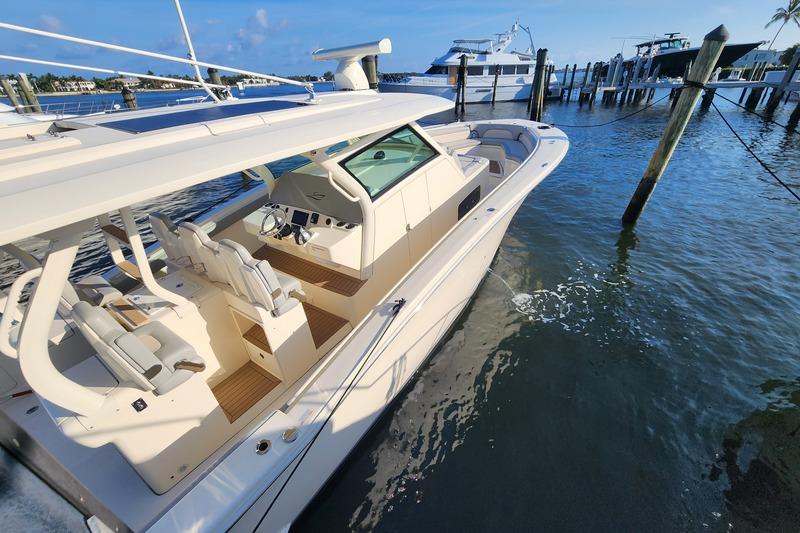 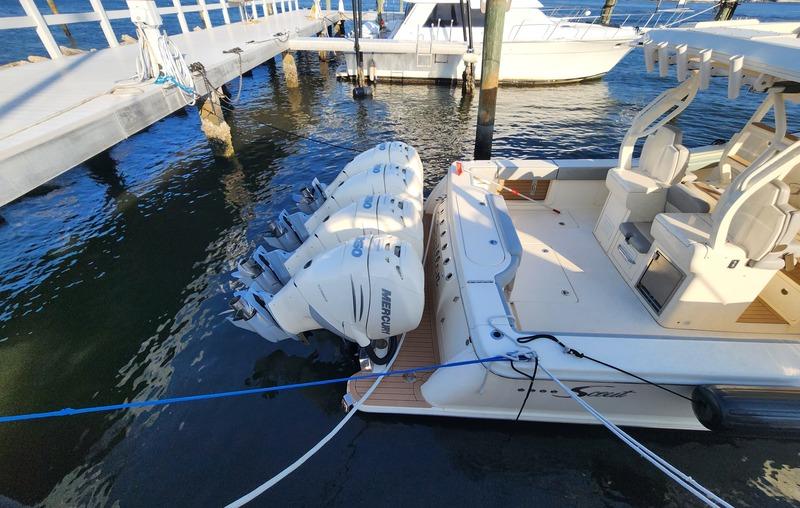 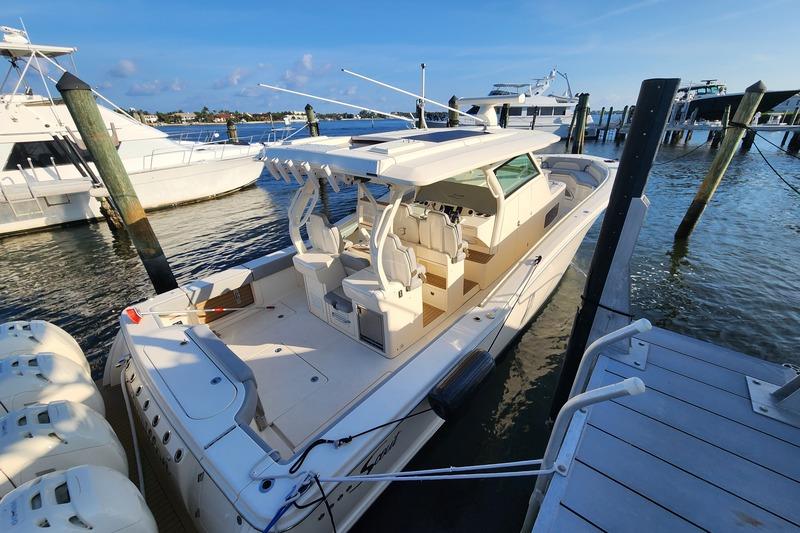 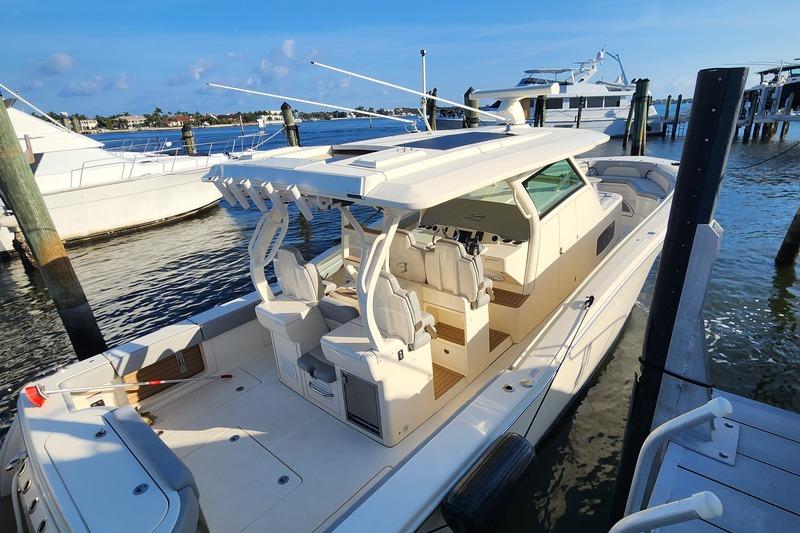 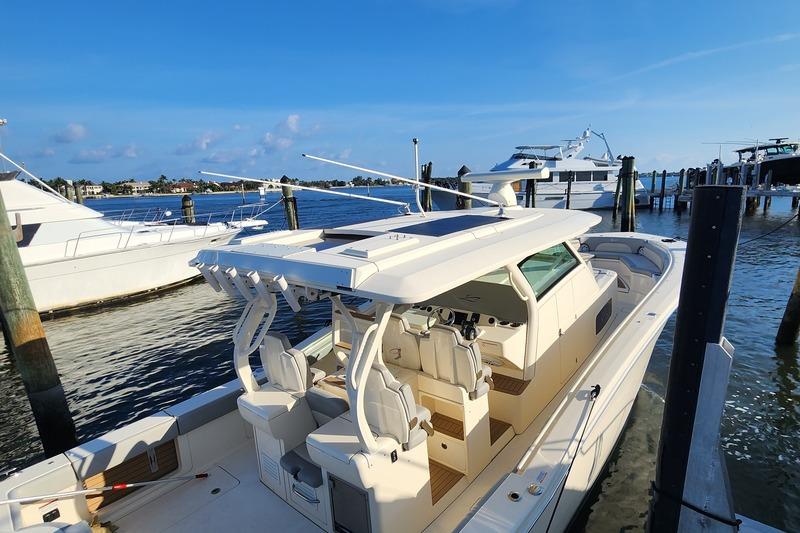 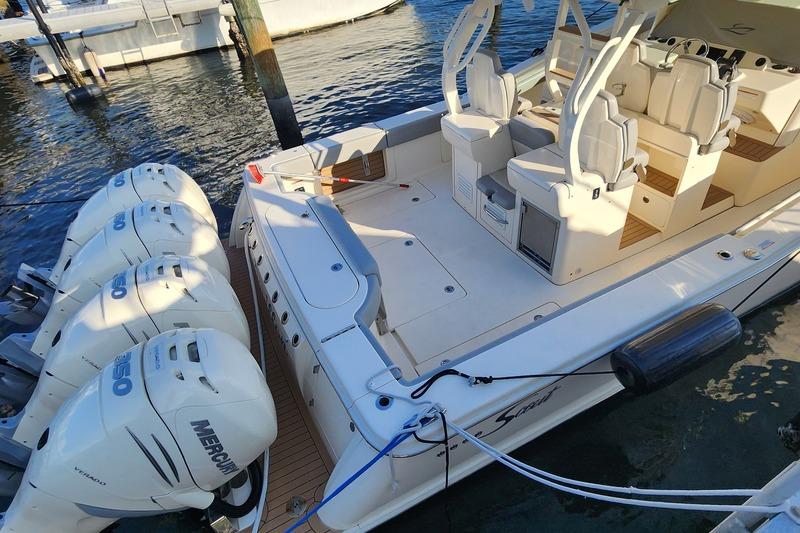 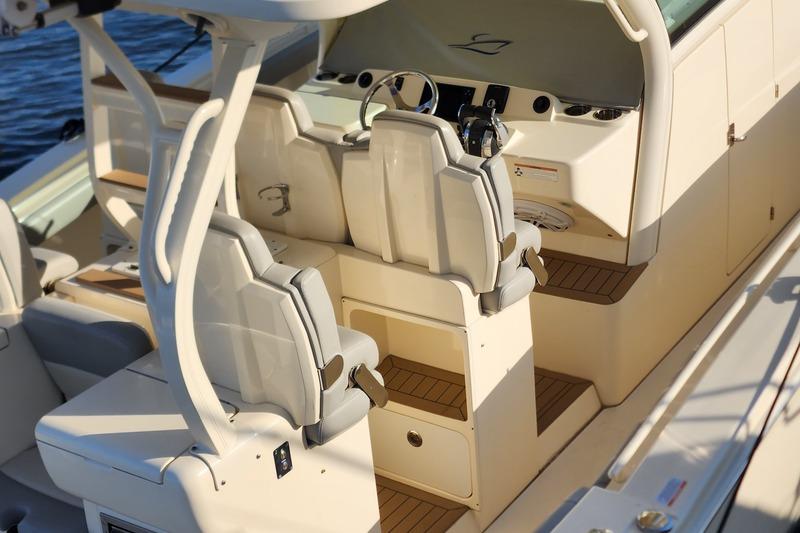 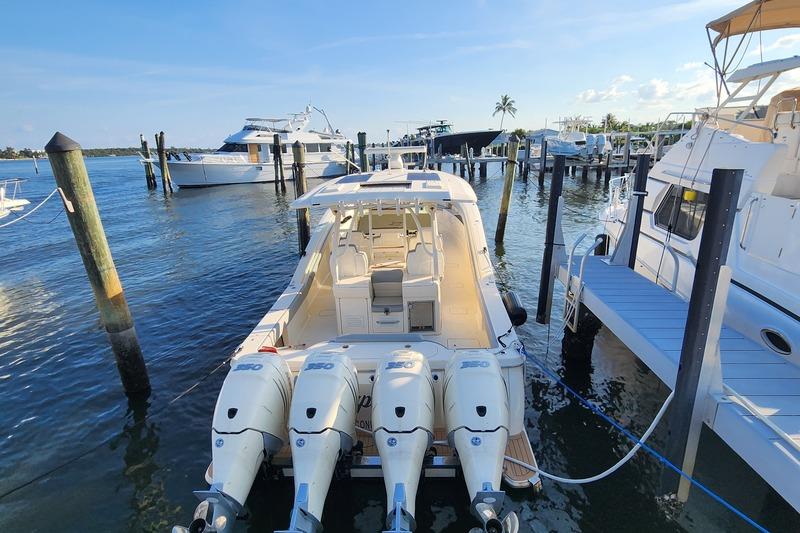 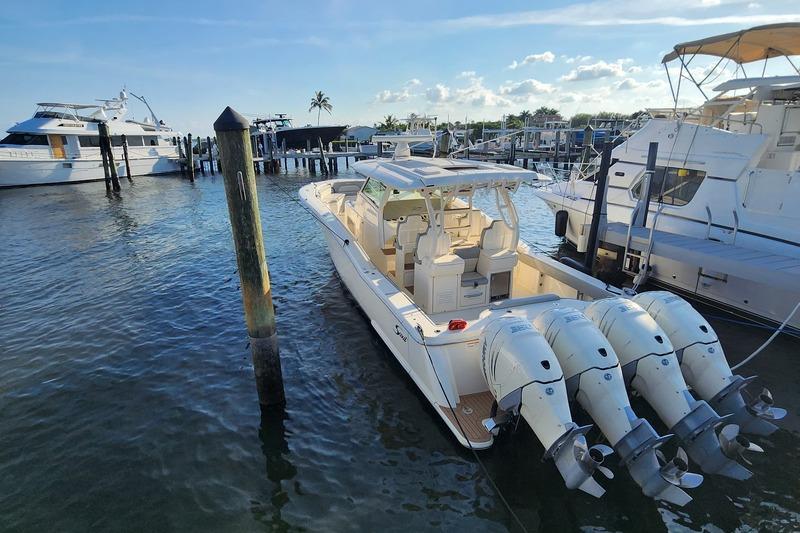 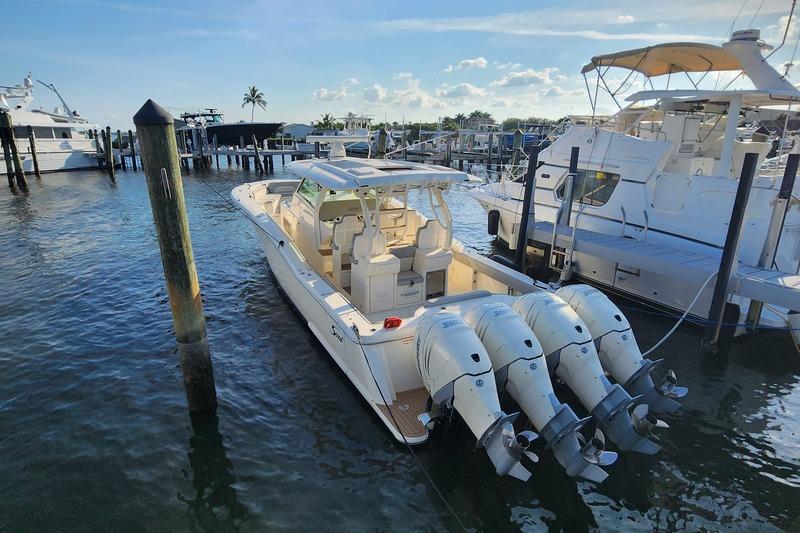 When boat companies put their brochures together, many of them, including Avalon, put their top-of-the-line models up front. Usually, by the time buyers reach the more affordable models in the middle, there’s a significant drop in luxury. The Catalina line sits smack dab in the middle of Avalon’s food chain and is less costly than its Excalibur, Ambassador and Catalina Platinum models by a fair bit, but people are going to think owners laid out big dollars for the 2385 Catalina RL, even though it starts as low as $37,339 with a Suzuki DF50. One constant through the Avalon line is its Art Deco styling, which I would describe as mod retro. On the 2385 Catalina RL, Avalon uses its Deco 3 fencing scheme to great effect. This style gives owners the option of 10 upper wall colors and 10 lower wall colors, but our test boat was solid white, which would have been one of the last combinations I would have chosen from Avalon’s build-a-boat website simulator. While this sounds boring, in person it looks great and really highlights the chrome horizontal accents and badging. Not white enough for you? There’s another brighter shade of white.

What it doesn’t have is the usual latticework of rails, going instead for a cleaner look with one rail that swoops down toward the rear. A styling cue perhaps taken from vintage American cars is the raised shearline toward the stern, like a 1959 car fin. Inside, the interior walls are sans rail, which picks up on the clean look of the outer wall. Rear-lounge models remain among the most popular, because who doesn’t want to spend their day off with their feet propped up? What’s amazing about these lounges is their extreme width, which invites close friends to share the seat. They also have smaller forward-facing backrests, so lounging while watching where the boat is going is an option. Oversized armrests might limit each lounge’s upright seating capacity, but they add another layer of comfort. Unlike most pontoon builders, Avalon uses aluminum frames and the seats have suspension seat bottoms and a ventilation system for the storage compartments beneath.

Pontoons these days are off-the-hook crazy with the available power — a Manitou we tested last year had twin Mercury Racing 400R outboards — so when I saw that the 2385 Catalina RL only had an Evinrude 135 H.O., my performance expectations were tempered. But the 135 H.O. is one of Evinrude’s hot rods, with an actual horsepower rating of closer to 150. It’s also a V-6, so its low-end torque is better than it would be if it was in the V-4 family, like the Evinrude 115 H.O. Out of the hole, it was snappy, delivering a time to plane of 2.9 seconds — quick, considering the 2385 RL weighs about 2,700 pounds with this motor. Of course, it was also helped by Avalon’s optional three-tube Express Pontoon setup ($3,982), which has lifting strakes on all the tubes to help get it on plane. Its time to 25 mph was surprisingly fast at 5.9 seconds, and it reached a top speed of 35.6 mph. The horsepower rating with the Express Pontoon setup is 150, so the Evinrude 135 H.O. puts it pretty close to the envelope. And buyers have plenty of engines to choose from, since Avalon rigs all major outboard brands. For more giddy-up, the Performance Pontoon package allows up to 200 hp, and the top dog Waveglider package brings 250 hp into the picture. One of the problems with pontoons that don’t have an extreme amount of power is their propensity to plow through the water, diminishing performance, hurting fuel economy and sacrificing nimble handling. But because the Express Pontoon-equipped 2385 Catalina has six large lifting strakes, it easily gets on top of the water with only a 135, resulting in many benefits. It also comes with BayStar hydraulic steering and has an aluminum underskin that makes it more hydrodynamic. The strakes vastly improve its ability to perform well during watersports and reduce the amount of time it takes for a skier to get up. During turns, pontoons with strakeless tubes tend to lean outward, causing the outer tube to plow and quickly drain speed. But our test 2385 cornered very flat and didn’t experience a significant loss of speed. Without strakes, a driver can hit the trim button all he wants, but the only thing that will accomplish is to blow out the prop when it gets too far out of the water. But we were able to get the front third of the pontoons out of the water, which helped top speed and should give the passengers up front a smoother ride. This is also a safety bonus when the pontoon is loaded with the 11 passengers it is rated to carry.

The 2385 Catalina RL excels at delivering affordable luxury in a package that can handle many different roles. For watersports, the tow options start with a curved stainless steel ski tow bar ($745) that matches the four-step boarding ladder with tall swimming pool–style grabrails. After that, the options move to a fold-down 2-inch-thick tower ($6,328) and culminate with a Decosport Arch that also has a sunshade, for $11,250. For entertaining, a large greywood rectangular table with four cupholders and enough room to host a card game makes the bow a social place. The dual bow recliners are shorter than those on the larger 2585 RL, but stainless steel cupholders are everywhere on this boat, with deck-level holders in the bow and four more on the rear lounges’ armrests. The only fishing option is an under-seat livewell ($328), but avid anglers will opt for the 2385 Rear Fish model, which has fishing chairs on an extended rear deck and a bait prep station with rod holders. On the rear deck are two rod holders on a raised platform that also has storage and a large working surface that can hold snacks for the stern guests. The raised stern stand serves as a visual barrier to hide pumps, batteries and hoses, and it reduces the sound level. Direct-injected two-strokes such as the Evinrude on our test boat are typically louder than four-strokes, but at a cruise speed of 27.3 mph and 3500 rpm, it only registered 81 dBA.

The Express Pontoon package is the way to go for buyers powering it with 150 hp, which would be a good choice. It saves $5,468 over the more advanced Waveglider pontoon system but still comes with the benefits of three tubes. Although the standard stereo is a pretty upscale four-speaker Infinity Bluetooth system, optioning up a premium JL Audio system with a subwoofer ($3,828) unleashes its party potential. For shade, a standard Bimini top can be upgraded to an electronically actuated model ($1,367). To create a total eclipse, a forward Bimini is a $1,719 option. For flooring, Avalon offers a vinyl rear deck and Deco carpeting up front, but buyers have 10 vinyl choices, including the ATD Classic vinyl surface ($1,172) our test boat featured. For our next Avalon, we’ll probably get one with a bigger engine and one with a large, single rear lounger.

We haven’t been boating very long, and our first boat was a small Mako fishing boat we used more for cruising than fishing. When we got on my buddy’s pontoon, I knew that was what we needed. We started with a two-log Avalon and used it for two summers but wanted better performance and seakeeping for the big bays here. I looked at all brands but really liked the Avalon Catalina 2385 RL equipped with a Waveglider Package that included a third tube for great handling, even when it gets choppy. The boys love to tube, and we like to cruise around and pull up on the many beaches to socialize with other boaters and like to hit waterfront restaurants. Our first buying experience at WMF Watercraft was outstanding. Bill put no pressure on us and encouraged us to think it over before buying. I can call him any time and ask any question, and the service has been phenomenal. We will definitely buy our next boat from WMF Watercraft and have our eye on the Avalon Catalina VRB with a 250.