With a Volvo Penta powerplant, the Bennington 2552 QCW I/O has the power to move along nicely and the amenities to perform well even when standing still. 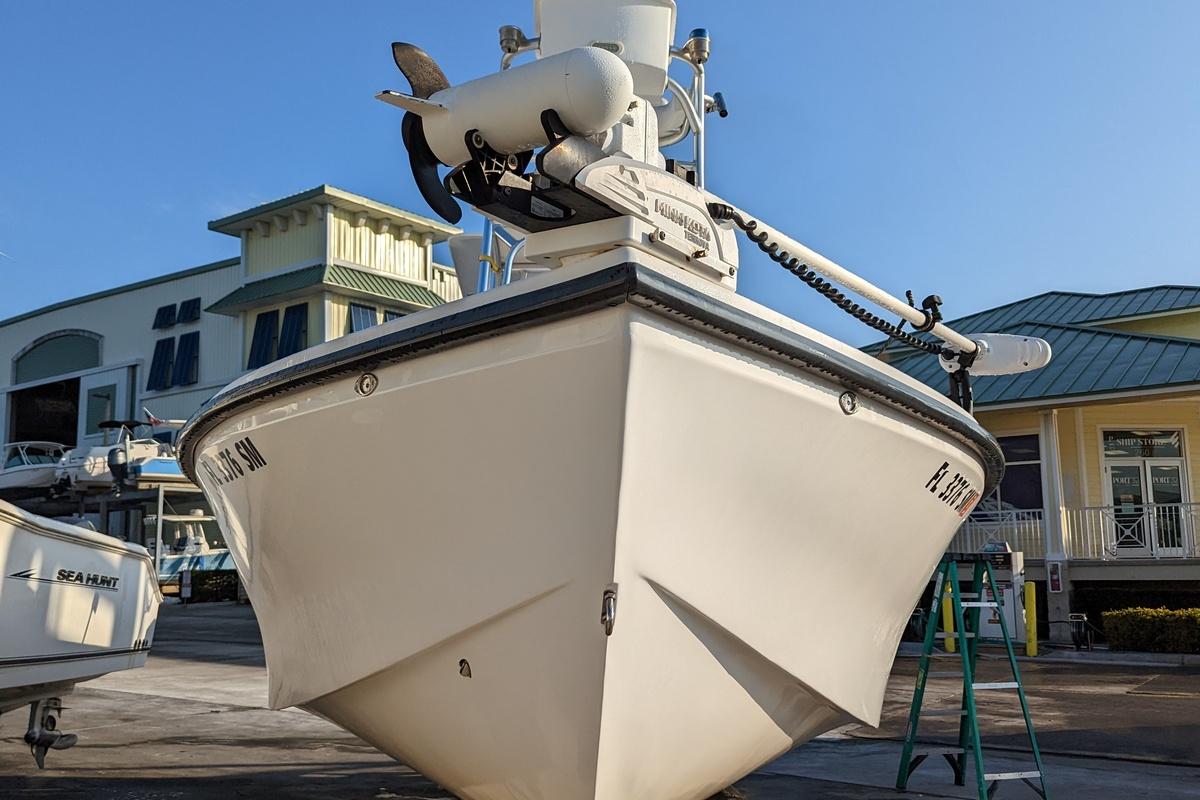 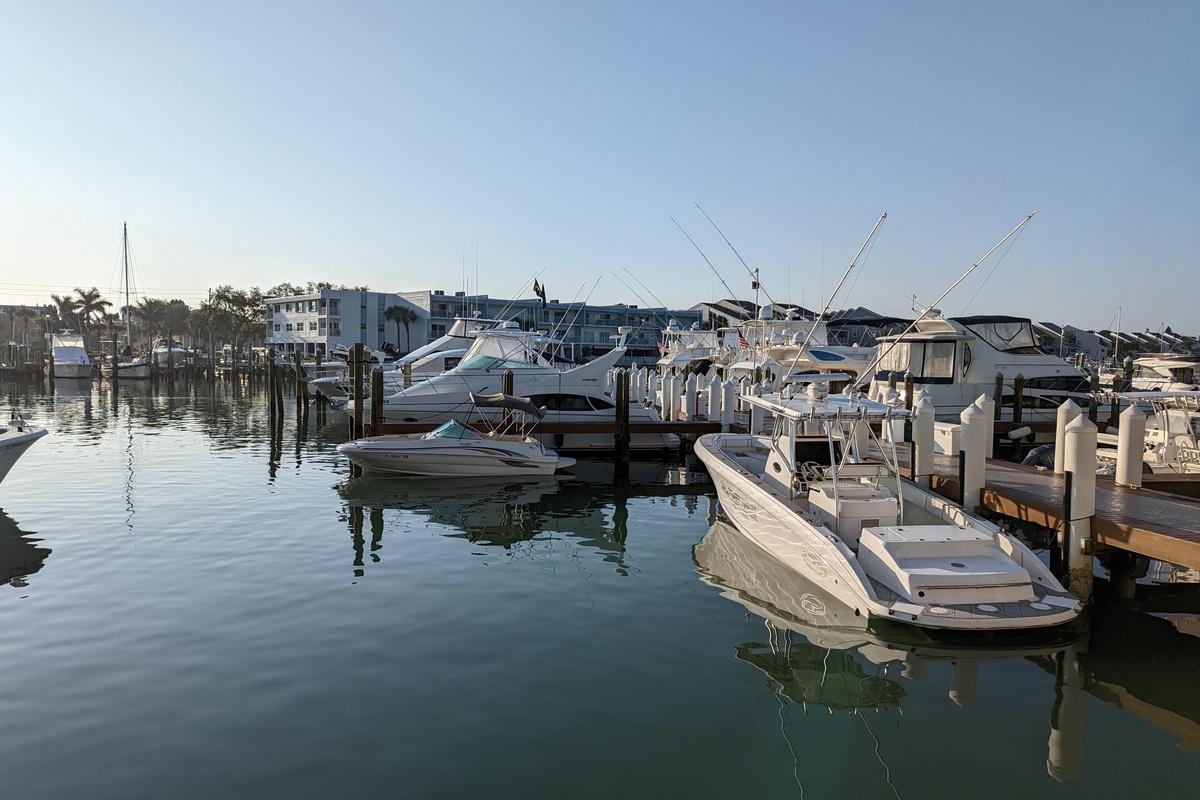 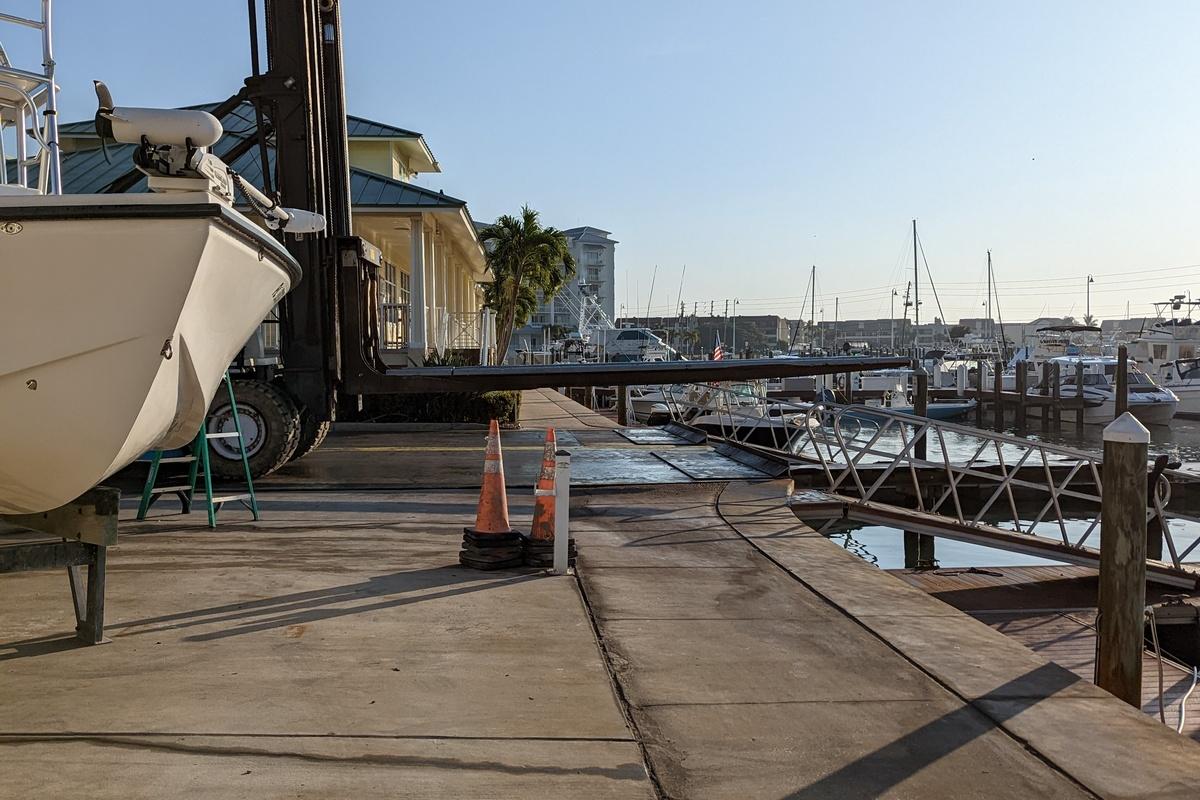 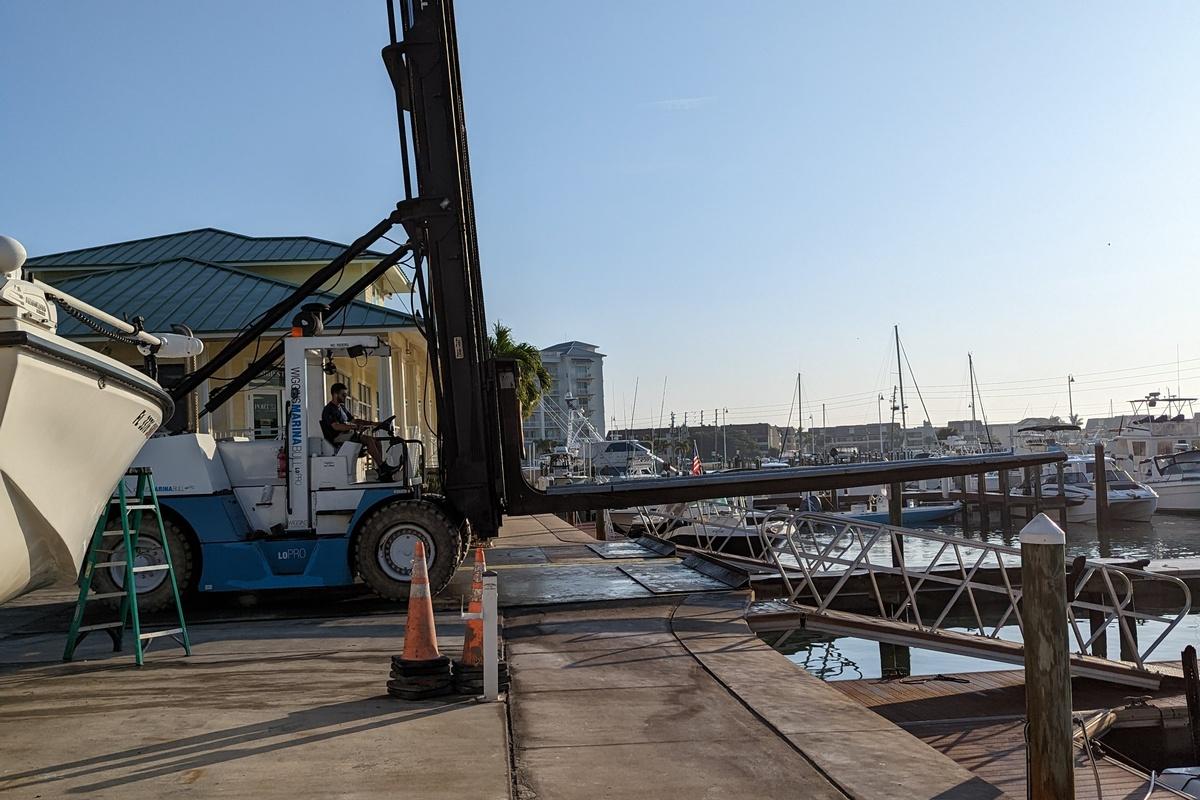 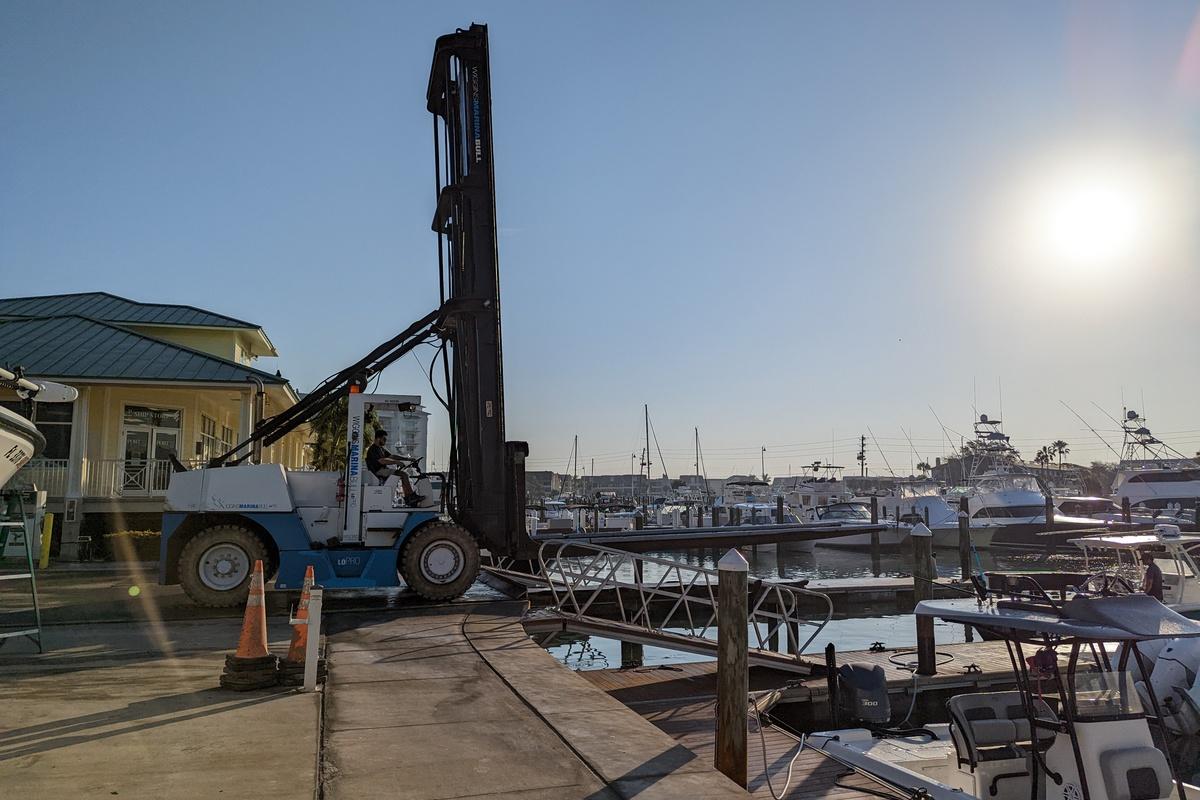 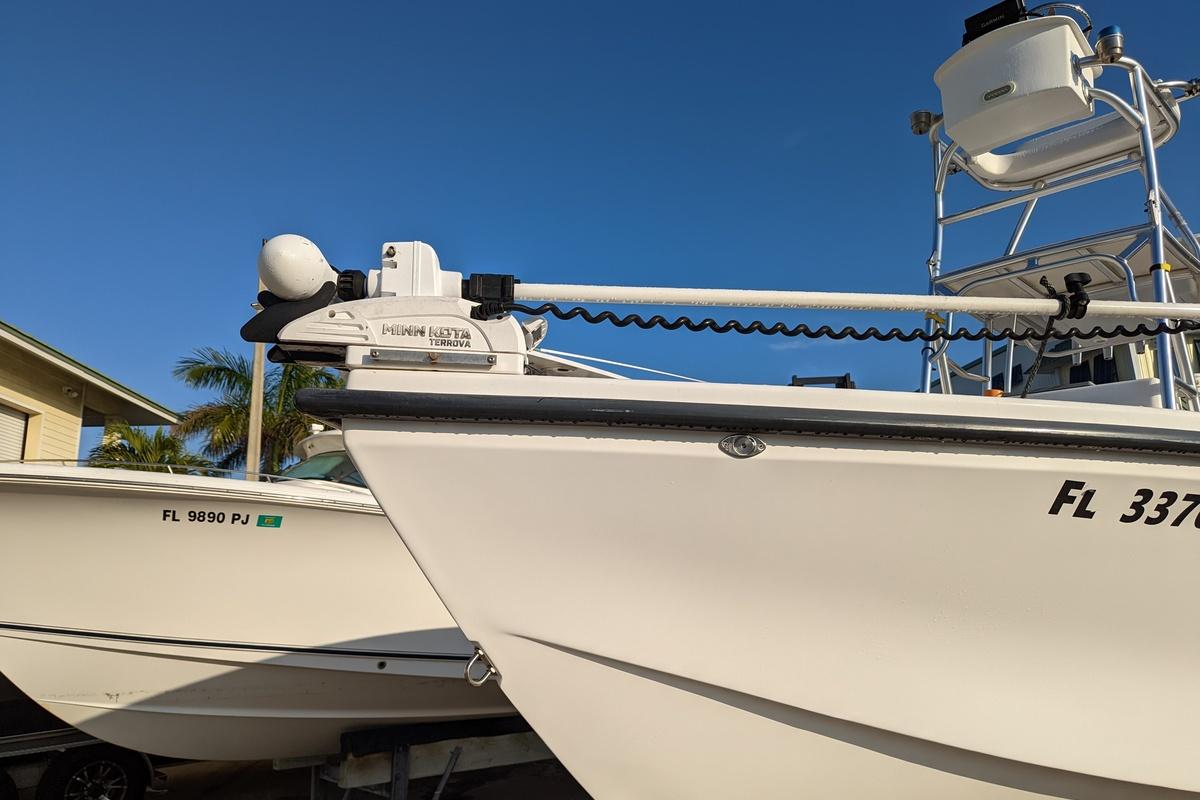 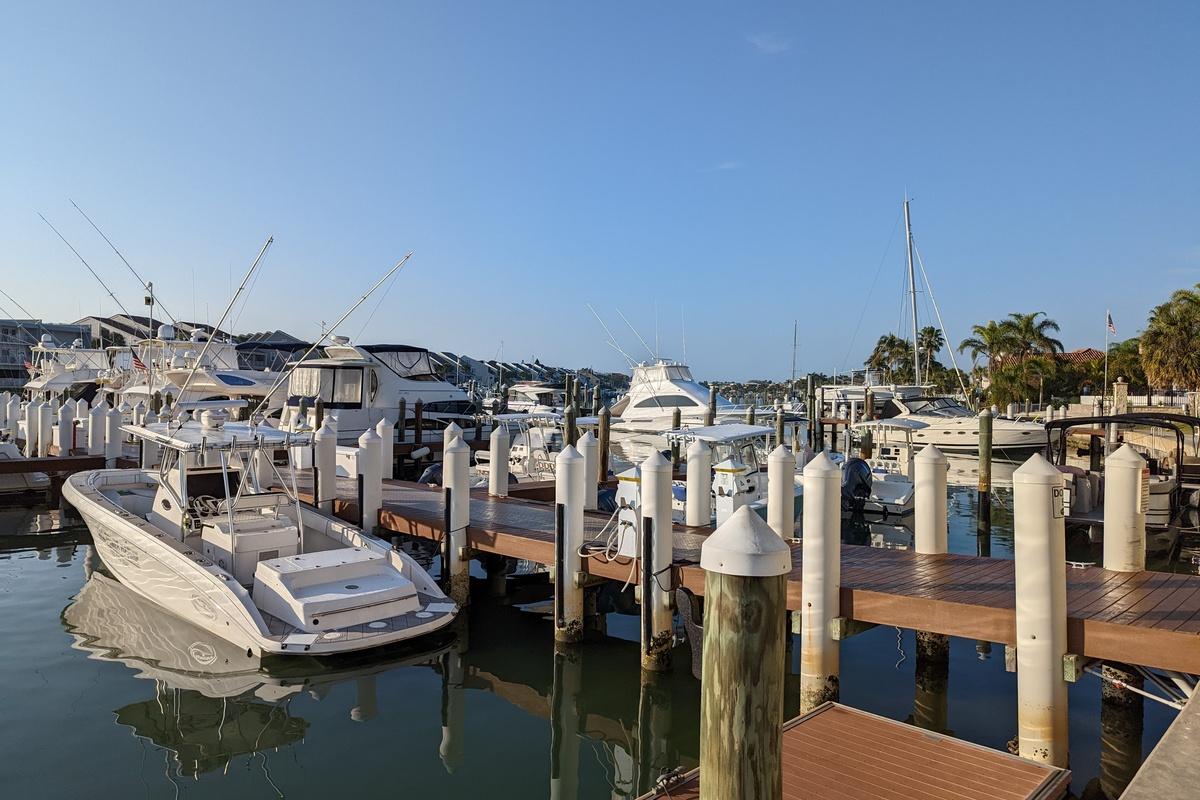 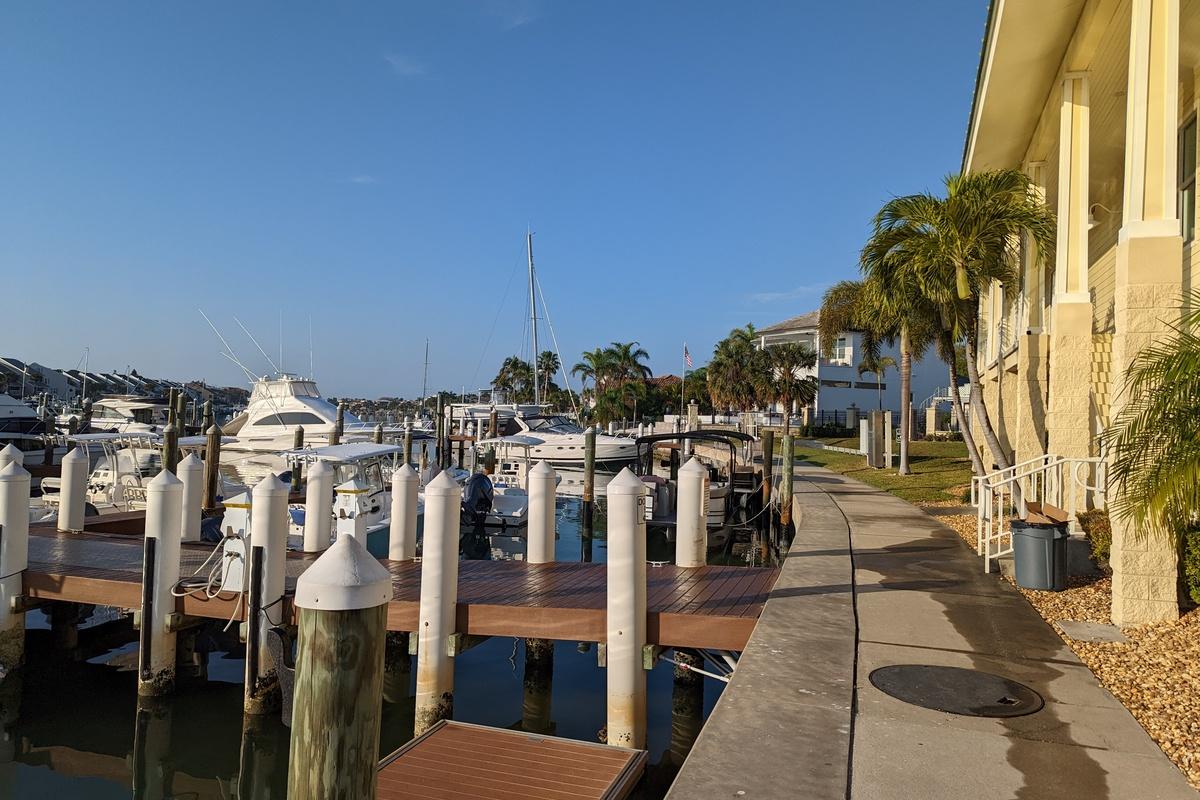 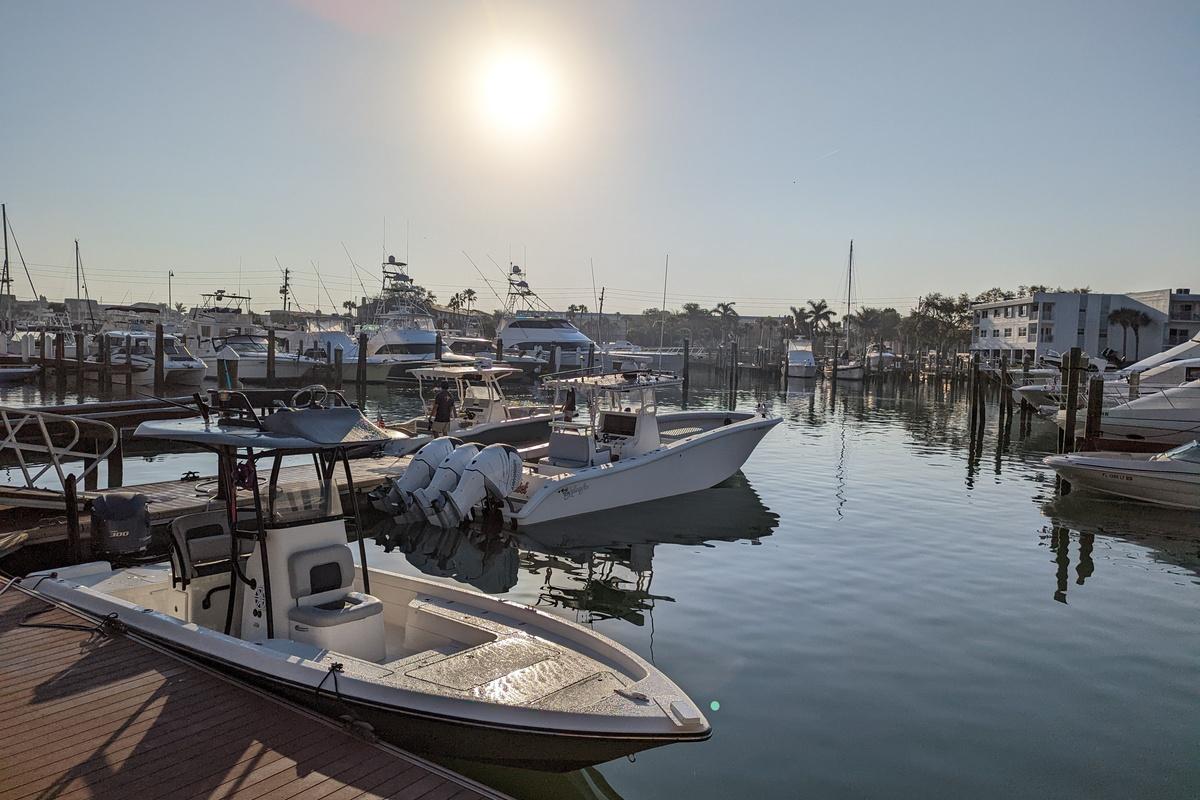 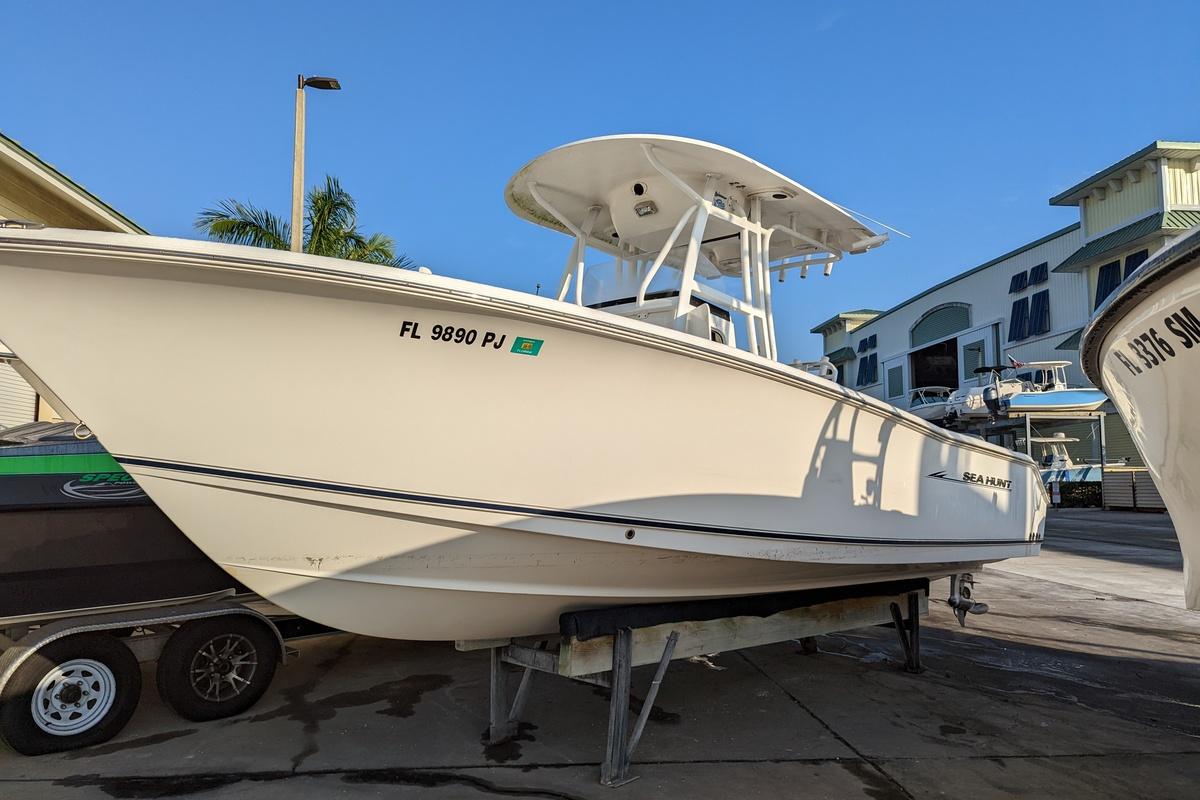 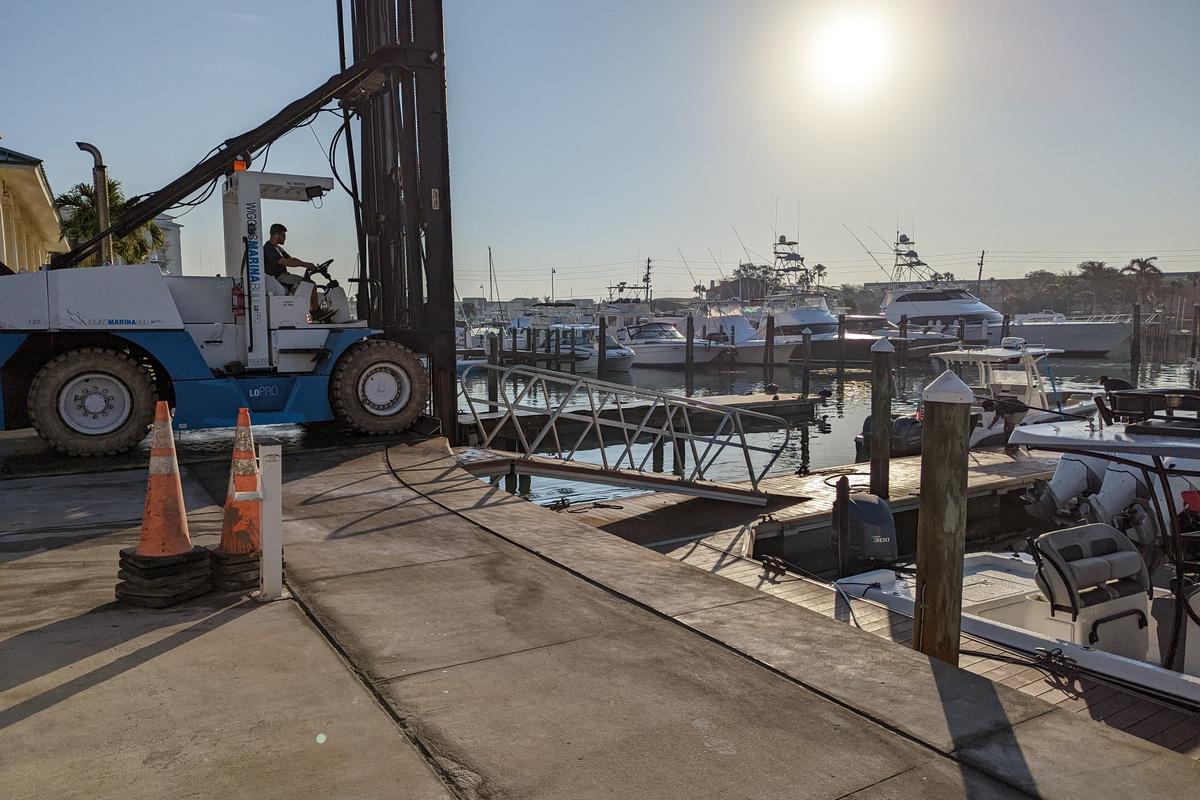 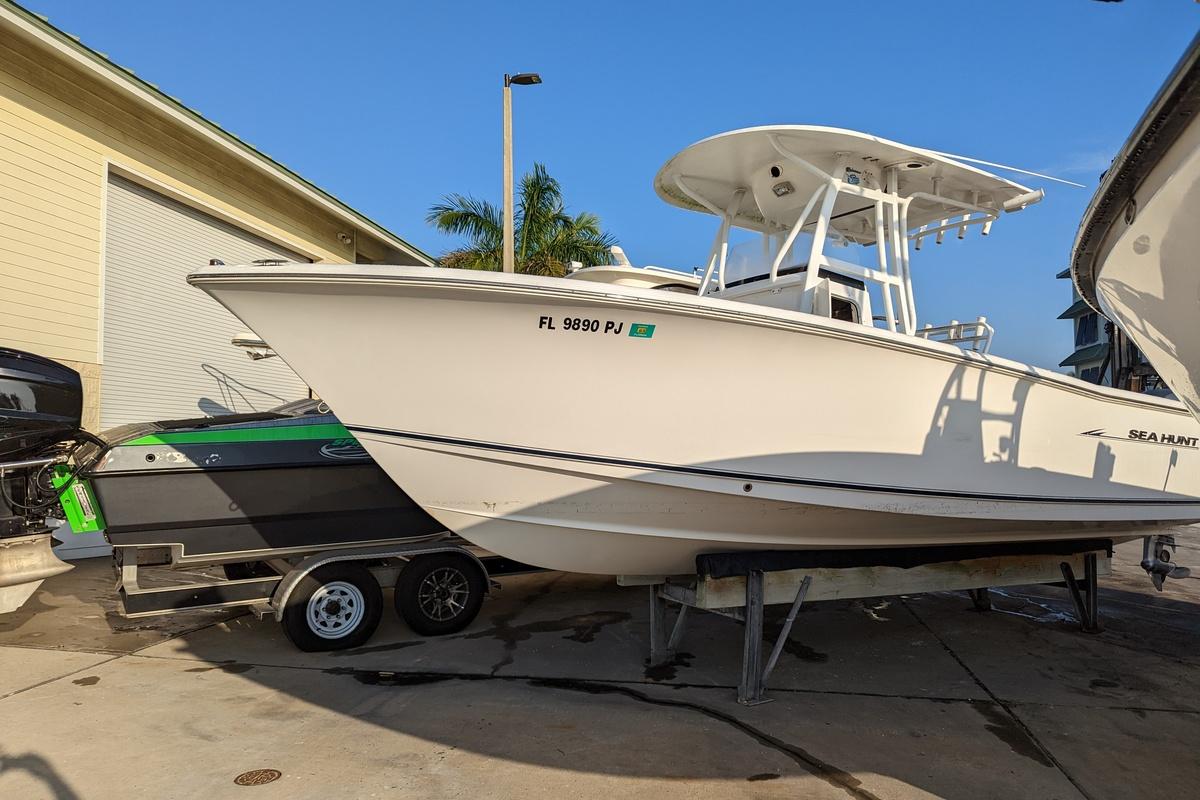 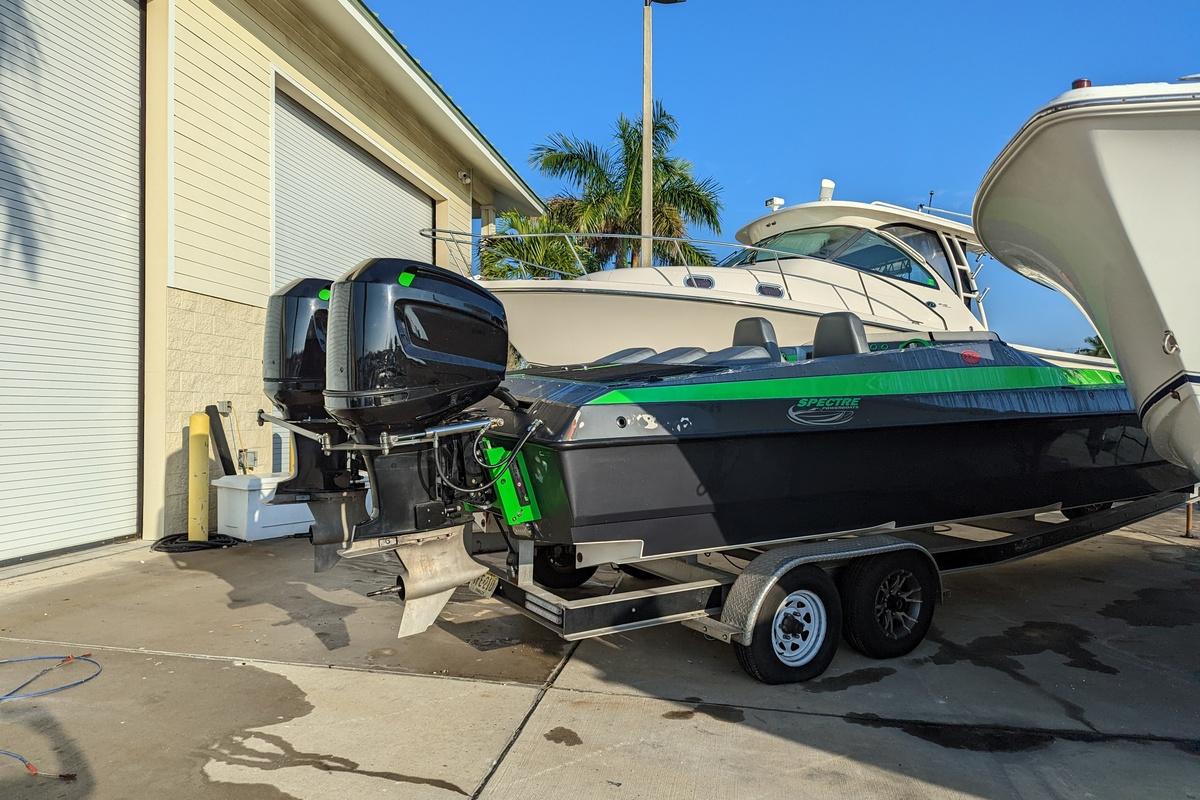 It’s no surprise that outboard power has dominated the pontoon world, but boaters looking for a unique look — and sound — might do well to consider the Bennington 2552 QCW I/O. Its Art Deco styling touches, such as the radiused bow section and scrolled docking light fixtures, blend well with its more contemporary design elements to give it a look that sets the top-of-the-line Q-Series apart from other pontoons.

One of the benefits of using sterndrive power is leaving more room for a swim platform, such as the huge one on the 2552. It’s all usable space, with no outboard and its rigging hogging space or bisecting it. It gives this Bennington a really clean look and makes a great place to hang out while at rest or to tie down an inflatable.

Another thing you seldom see is a full windshield, especially not a dark glass one that looks like your pontoon is wearing a pair of Oakleys. It’s tall enough to be functional, which will be appreciated on early- or late-season romps, but low enough to give it that go-fast sportboat wow factor. Also adding to its hip quotient is the optional, radically streamlined fiberglass sport arch ($8,678), which has a number of functional uses. Artfully curved “D” rails and the rippled Champagne fencing on our test boat combined to create an understated but elegant look. At the helm, pressing a rocker switch electronically activates hydraulic dams that raise the entire rear section to reveal the prize within — a new-gen Volvo Penta 6.0L 380 hp V-8. Previously, getting a 380 hp sterndrive engine from Volvo Penta meant choosing the 8.1L beast, but since GM no longer makes that block, it was time for a change. The new sterndrive powerplant is derived from the Vortec L96, the largest gas engine on Chevy’s 3500 “dually” truck, which can tow up to 14,100 pounds, so pulling up your barbecue-loving neighbor on a slalom ski won’t be a challenge … for the boat anyway. In addition to being more compact, the engine weighs about 280 pounds less than its big-block predecessor.

The power came on fast and furious as the 28-foot, 5-inch Bennington 2552 reached plane in 2.9 seconds, with far less bowrise than you would expect from a sterndrive-powered pontoon. There was no dip in the power band as it accelerated to 30 mph in 7.2 seconds and quickly topped out at 47 mph. Part of its great performance can be attributed to a 32-inch Elliptical center tube, which provides loads of lift. If you want to bust 50 mph, there is an available 430 hp engine, but it’s $9,279 more expensive than the 380 hp sterndrive. In addition to helping the 2552 ride high in the water for a safer ride in the chop, the 32-inch Elliptical tube creates a pivot point that mimics deadrise on a sportboat when paired with the 25-inch outer tubes. The center log reduces wetted surface on the outer tubes, leading to higher top speeds and helping it carve hard turns that bank inward enough to nearly raise the outer tube entirely out of the water. Thanks to the power steering system, whipping the 2552 in a sharp 180 was accomplished with one finger, but you’ll want to grab the sports car–like wheel at the ultra-modern helm with both hands.

Volvo Penta’s Duoprop setup helped the pontoon track in a straight line, even when idling, which is not the case on most I/O sportboats with one prop. All that grip helps prevent blowouts in hard corners and, as evidenced by its out-of-the-hole performance, is the equivalent of having racing slicks for enhanced traction.

The 2552 is well-suited to handle anything you throw at it. As a watersports boat, it can excel if equipped with the fold-down tower, which can be optioned to include board racks and speakers, but I prefer the clean good looks of the bare tower. Even without the board racks, you’ll find more than enough storage in the optional centerline compartment, thanks to the oversized center tube. Although the compartment lid stays open when leaned against the console, it would have been nice to have a hydraulic ram to handle that duty. If you need a lower tow point, there’s a standard removable ski pylon that provides a solid base for skiers. The observers might have the best seats in the house on twin oversized recliners that have polished stainless steel rails for security, so riders don’t feel boxed in by fencing.

While the twin rear loungers reduce seating in the stern, the bow section more that makes up for it, especially if you get the filler section ($788) for the bow boarding gate. With it in place, the entire bow section is turned into a giant conversation pit. There’s a pedestal for an optional bow table ($988) that has a realistic-looking matte maple finish and plenty of snack display space. Moveable cupholders, also trimmed in faux maple, follow you around for perfect placement. The Q-Series comes with diamond-stitched, pillow-top furniture that envelops you in luxury. If you tend to bring along a bunch of gear, such as life jackets for the 17 people the pontoon is rated to carry, you’ll appreciate the under-seat storage. It’s a top-of-the-line Q-Series model in a premium pontoon builder’s lineup, so you’ll be forking over some coin for the privilege of ownership. Even though you’re looking at six figures, you might as well equip it correctly, and our test boat was pretty much exactly the way you want it rigged. The Elliptical Sport Package (ESP), which includes the 32-inch center tube at a reasonable $1,194, is a must-have. I loved Volvo Penta’s 380 hp engine, but it comes at a $12,004 upcharge. The standard V/P engine is a 280 hp V-6, but the sweet spot seems to be the 350 hp 6.2L sterndrive that comes at a $4,954 upcharge. MerCruiser lovers can find happiness at the 350 hp level for a $4,850 upcharge. The standard MerCruiser is a 300 hp 6.2L V-8.

The big question is tower or no tower? Even if you are not a ski fan, it’s likely you will have the odd skier as a guest, so you should be ready for action. Plus it adds a styling element that gives the boat an eye-catching quality. Priced at $8,678 without speakers, it’s probably worth it. The boat is a party waiting to happen, so you’ll want to pump up the tunes with a Wet Sounds subwoofer and amp. Our test boat came with the Platinum Herringbone carpeting, which comes standard, and had the optional faux teak stern section ($569), but the popular flooring these days is Sea Grass, and Bennington offers it for $1,542.


I considered buying the sport arch but ended up with the Bimini top instead. In retrospect, I wish I had gone with the arch; it really would have added a sporty touch to my pontoon.

My family and I have always had “regular” boats, so when my girlfriend, Karen, suggested we look for a boat I really wasn’t thinking pontoon. That all changed when I got a look at the Bennington. It was really good looking and had incredibly luxurious appointments, so it didn’t take long to convert me. We keep our Bennington in the water at a nearby slip, so it’s easy to just jump in and go. We love taking our dogs, Amos and Rusty, out on the water and exploring the island beaches on Lake Norman. Most of the time we just putter around listening to music and relaxing while checking out the waterfront houses. Although we didn’t go waterskiing this year, we plan on doing it next year when it warms up. The buying experience at Lake Norman Marina was very pleasant. The salesman, Peter, was very knowledgeable and helpful.