Berkshire’s 250S STS helps take your on-water entertaining to the next level. 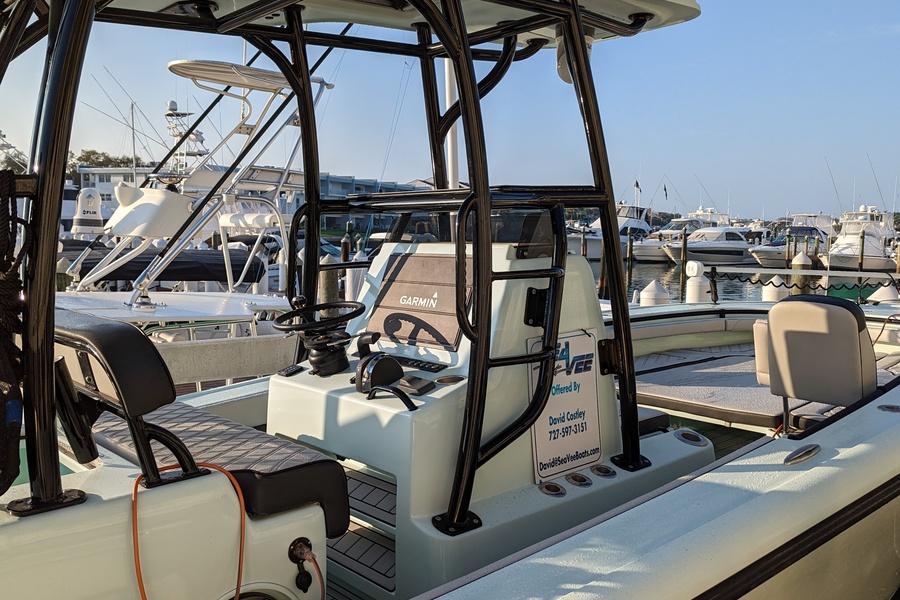 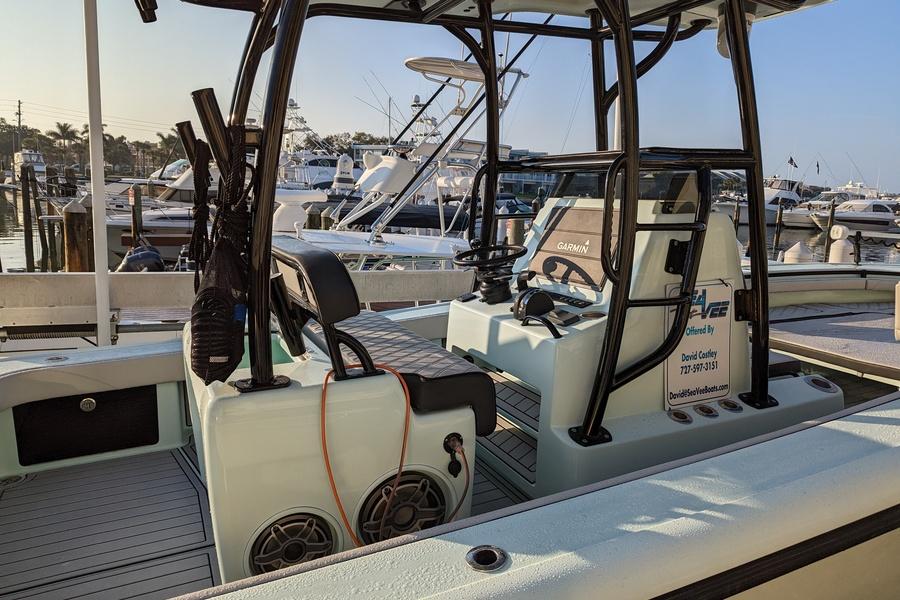 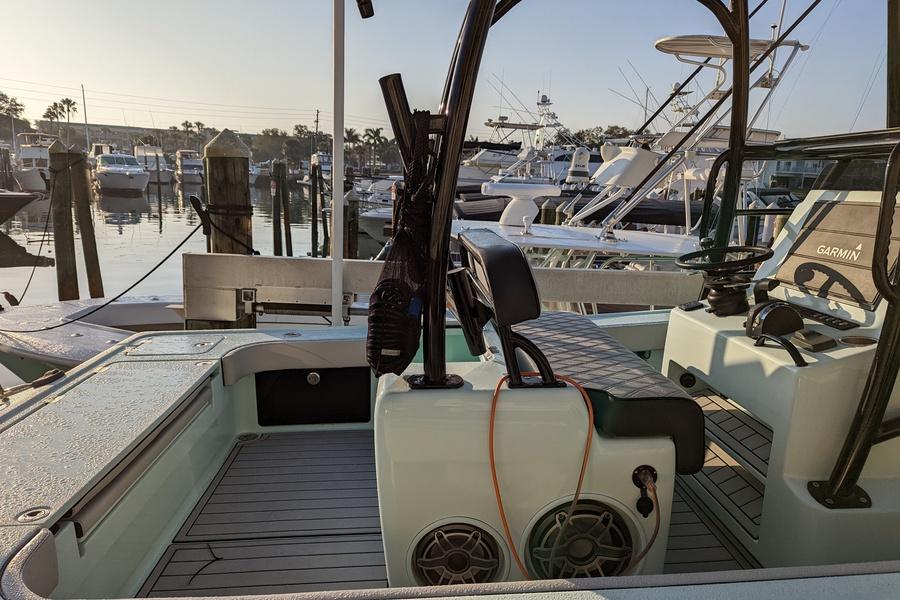 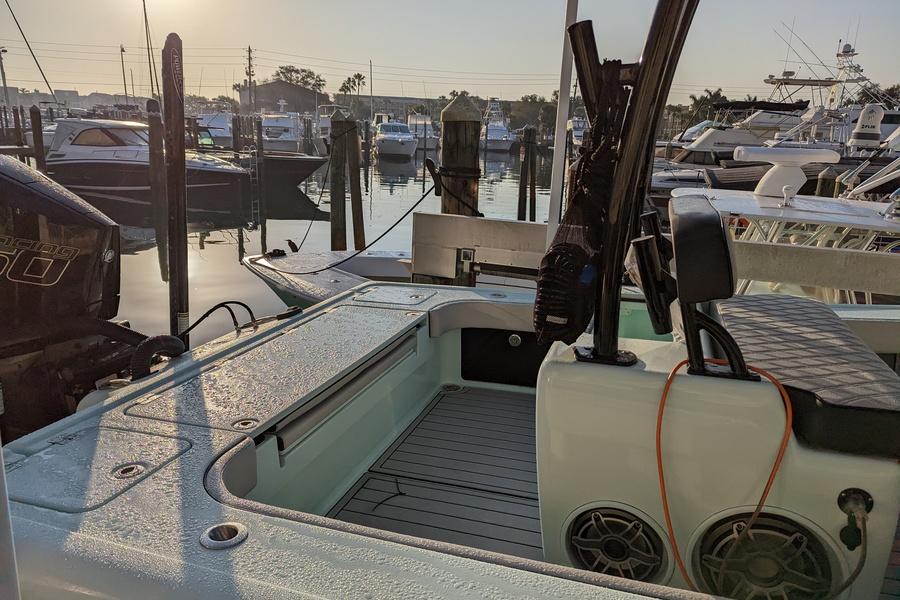 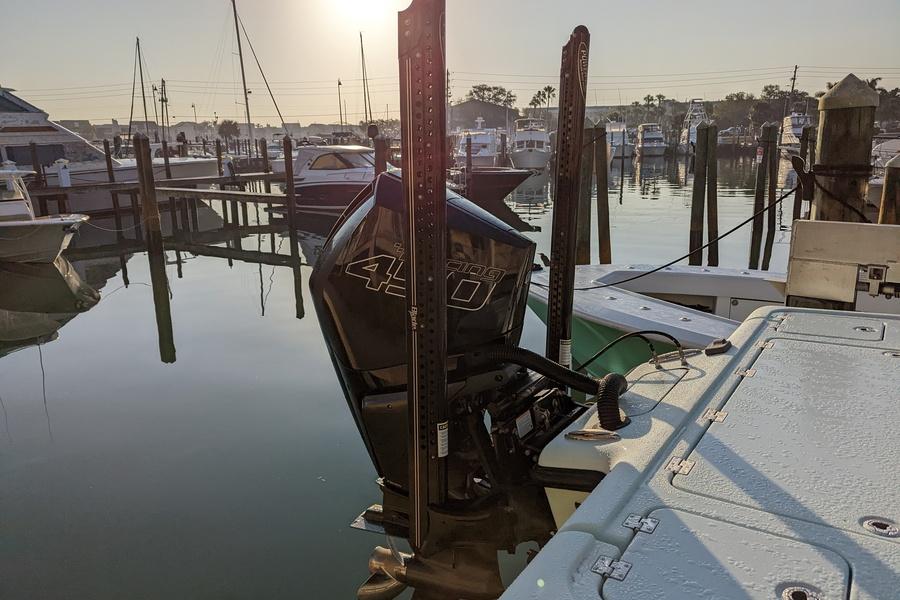 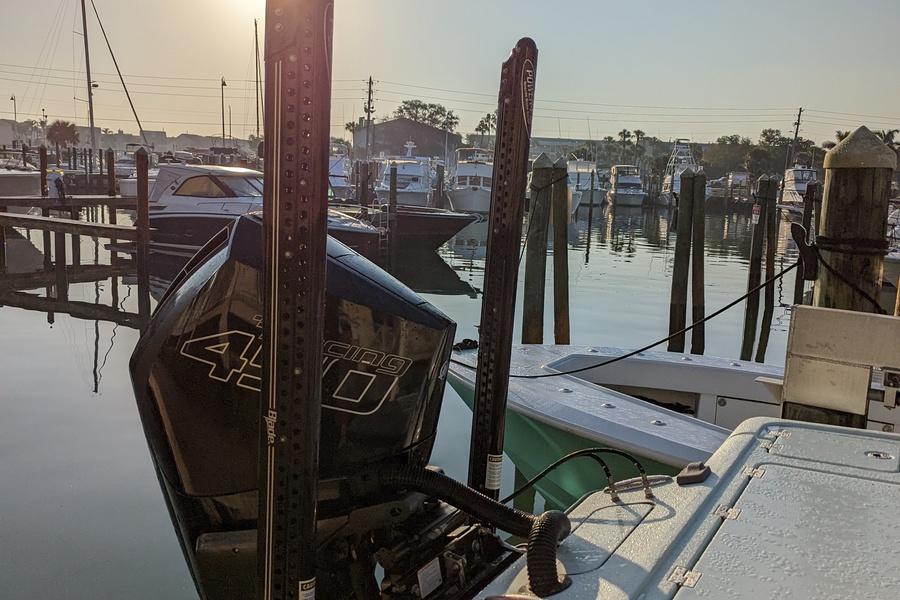 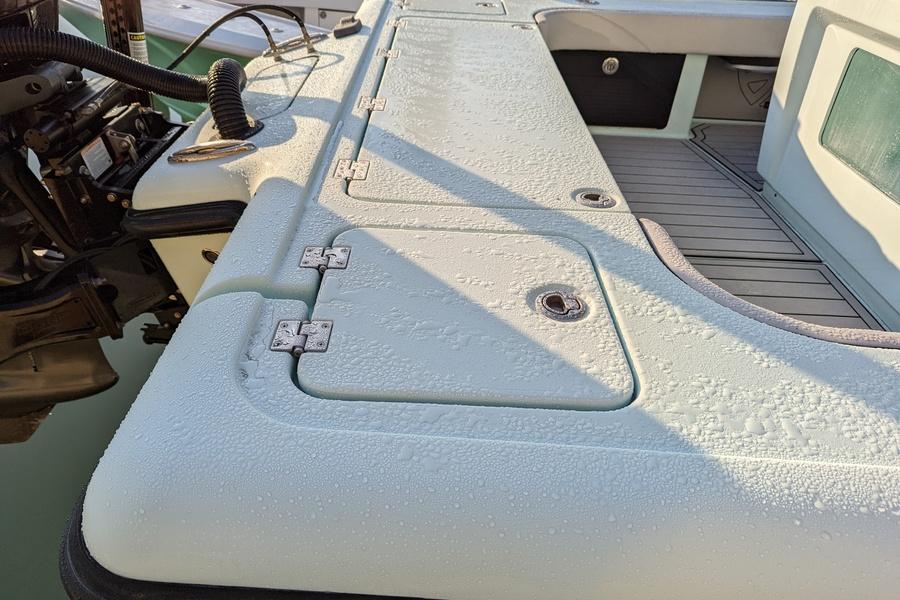 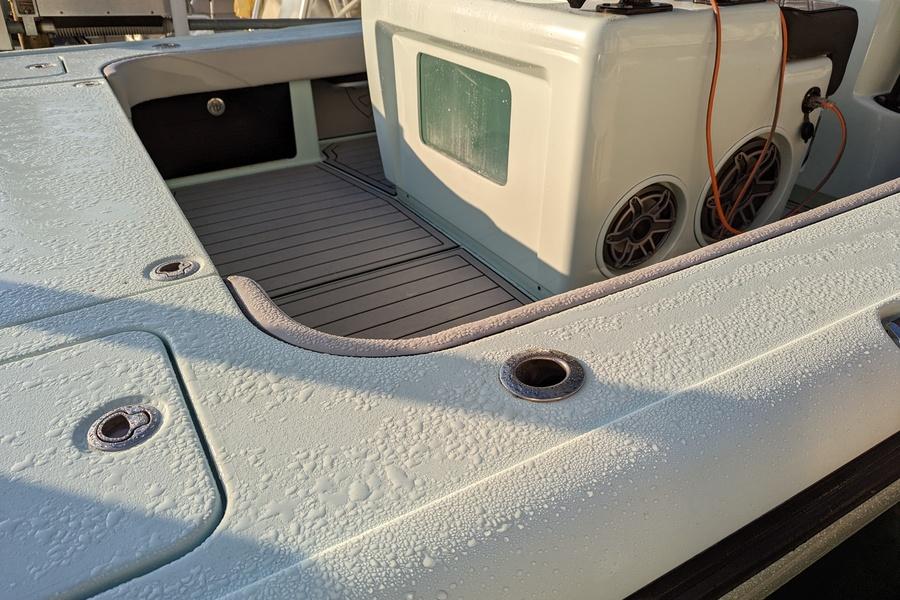 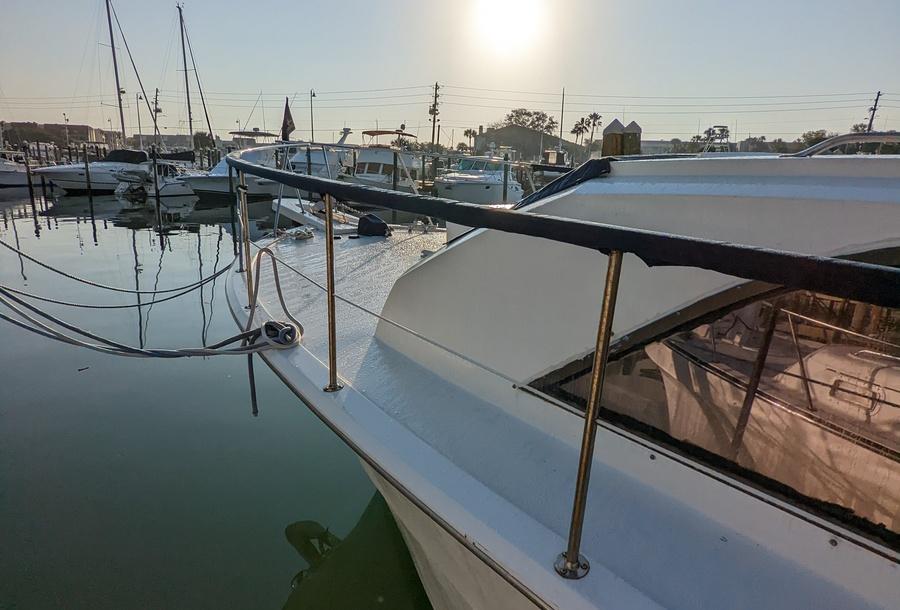 Sometimes a glimpse into a company’s background is very revealing and shows what you can expect, and Berkshire is no exception. It is a division of Forest River Inc., a wholly owned subsidiary of Berkshire Hathaway Inc., which has the distinction of having the highest price per share of Class A stock on the NYSE, $217,800, as of this writing, mainly because it’s never been split. Although this is very unusual, so is its boss, Warren Buffett, who still lives in the same house he bought in 1958, for $31,500. Ten years ago, Buffett purchased Forest River Inc., which is a heavy hitter in the RV industry and also builds pontoons under the South Bay and Xcursion nameplates. It’s just a hunch, but since Berkshire bears part of the name of Buffet’s company, I suspect there’s an understanding that the quality had better live up to its moniker.

Known informally as “the bar boat,” Berkshire’s 250E takes your entertaining chops to the next level, but it’s more than just a floating version of “Cheers.” Four height-adjustable bar stools around the Granite Topcoat (faux, despite the name) bar make the 250E more passenger-friendly, especially for kids. The STS Series falls in the middle of Berkshire’s lineup, from a luxury standpoint. Despite the fact the STS version of the bar setup is less elaborate than the one on the Premium Ultra Series 250E, it’s probably a better one for the average owner. The high-end model’s floor plan has a grill to starboard on a free-standing island; on the STS version, it’s replaced by a rear-facing chaise lounge, delivering more seating capacity. And the food/beverage prep island behind the STS’s main bar is much smaller but still has a sink and plenty of working space. Both series’ bars and stools are identical, and according to the ABYC (American Boat and Yacht Council), the stools are A-rated (like Berkshire Hathaway stock), so it’s OK for passengers to sit on them while the pontoon is in motion.

Our test pontoon fielded the 2.75 three-tube package, which is Berkshire’s ’tweener setup, performance-wise. It has a slightly shorter center tube, and the transom isn’t integrated into the tube. Unlike the tubes on the top-of-the-line 3.0 Trifecta Performance Package — three 25-inch logs and a center tube with lifting strakes on both sides — the 2.75’s center tube is in a state of strakelessness. The outer tubes on our test ’toon had lifting strakes only on the inside to do all the heavy lifting, and that was enough to allow a Yamaha F150 four-stroke to push it onto plane in 2.6 seconds, which was surprisingly fast. Time to 30 mph was 8.8 seconds, and its peak velocity was 35.4 mph — fast enough for watersports, but slalom skiers will push it close to its maximum capability. Since this setup allows up to a 200 hp outboard, it would make sense to go to the F200, if you are sticking with Yamaha (Mercury is also an option), because it weighs the same as an F150. Moving up would put top speed in the low 40s, giving you more watersports flexibility and a faster cruise speed with more reserve power.

The biggest difference between the two performance tube setups is that the 2.75 rig rides lower in the water and is more resistant to trimming up to reduce wetted surface than the 3.0, which has two more lifting strakes. For me, the size of the lake you typically cruise on will determine whether the 3.0 rates as a must-have option. On larger lakes, riding higher in the water is a good thing, because conditions can get rougher, and larger boats — with their larger wakes — tend to ply such lakes. Riding higher provides more resistance to submarining the front deck and getting your shoes wet and your dignity ruffled.

Our 250E turned very well, with just a bit of inward lean. The 2.75 tube setup comes with SeaStar hydraulic steering, which reduced steering effort and allowed it to track straight without prop torque constantly trying to turn the boat to port. Power steering is standard on the 3.0 rig.

As you might guess, a boat with such a full bar setup is ideal for entertaining. And for sunset cruising, the bar section is festively lit with LED lighting, as are the speakers and the rear of the boat. To expand on that theme, there’s available LED courtesy floor lighting ($700) as well as exterior underdeck ($1,050) and underwater lights ($1,100). The 250E comes standard with a killer 165-watt Clarion Bluetooth stereo flush-mounted at the helm, which features a realistic faux mahogany dash with a matte finish that matches the oval cockpit table up front. You can add a subwoofer with amp for $1,800 more. In addition to the rear chaise lounge, a pair of recliner sofas up front provide more seating for a few of the 13 lucky passengers. If you want more seating, you can axe the rear food-prep area and add a corner seat, which can be your professional mixologist’s chair when he’s not spinning up a smoothie.

When configured with triple tubes like our test vessel, the 250E makes a great watersports boat. The stainless steel hockey goal–shaped ski tow bar provides a granite-steady anchor for tow ropes, and a four-step boarding ladder with high grab rails aids in skier and swimmer extraction. The rear deck provides plenty of room to gear up before a run, which isn’t always the case with outboard-powered pontoons.

I really loved the two-tone navy blue and gray fence colors on our test boat, a color scheme that was replicated inside on the Comfort Seating upholstery. If that seems a little too Civil War-like, there are 13 other combinations to choose from. The STS package gives you stylized outer rails that swoop down toward the stern into an Art Deco motif. Our boat’s color scheme was reinforced by the choice of gray-teak vinyl flooring ($2,900), an option that gave it an extra nautical feel; plus, it’s easy to clean. If that doesn’t float your boat, there are 10 other options in addition to the standard 22-ounce carpeting that comes in Camel, Mocha or Grey Weave.

At the helm is a standard flush-mounted Murphy LED display to indicate speed and show the status of other boat systems, and you can option it to include GPS info ($1,200). You can add a depth and water temperature gauge and a high-backed captain’s chair. Boaters who love to fish or just want to know what’s going on below can add a gimbal-mounted Humminbird fishfinder.

Buyers looking to boost performance can power the 3.0 Trifecta tubes version with as many as 300 hp. In addition, fuel capacity nearly doubles, to 52 gallons, for more range, and power steering is included in the package.

We got it with the standard carpeting, because of the lower cost, but now wish we had purchased it with the all-vinyl floor, for the easy cleanups.

When we bought a house on Lake Lanier, north of Atlanta, we wanted a boat of our own. My family used to have a monohull boat, but after riding on pontoons we knew they were a better fit for our family. I had only driven low-powered, two-tube pontoons, but after experiencing a triple-tube model with a Yamaha 150, I found it to be a superior setup. The handling is fantastic and it really rides high in the water. We got a pontoon with a bar so the whole family would have a place to eat lunch together, and I like the fact the stools are approved for use while the boat’s in motion. Plus, the boys love sitting on them because they’re higher up and they can see better. Gainesville Marina has been fantastic; the buying experience was great. When our radio developed a glitch, they contacted Clarion and got a whole new unit instead of trying to fix it.