Crownline’s new 270SS is a premium bowrider that punches your first-class ticket to fun. 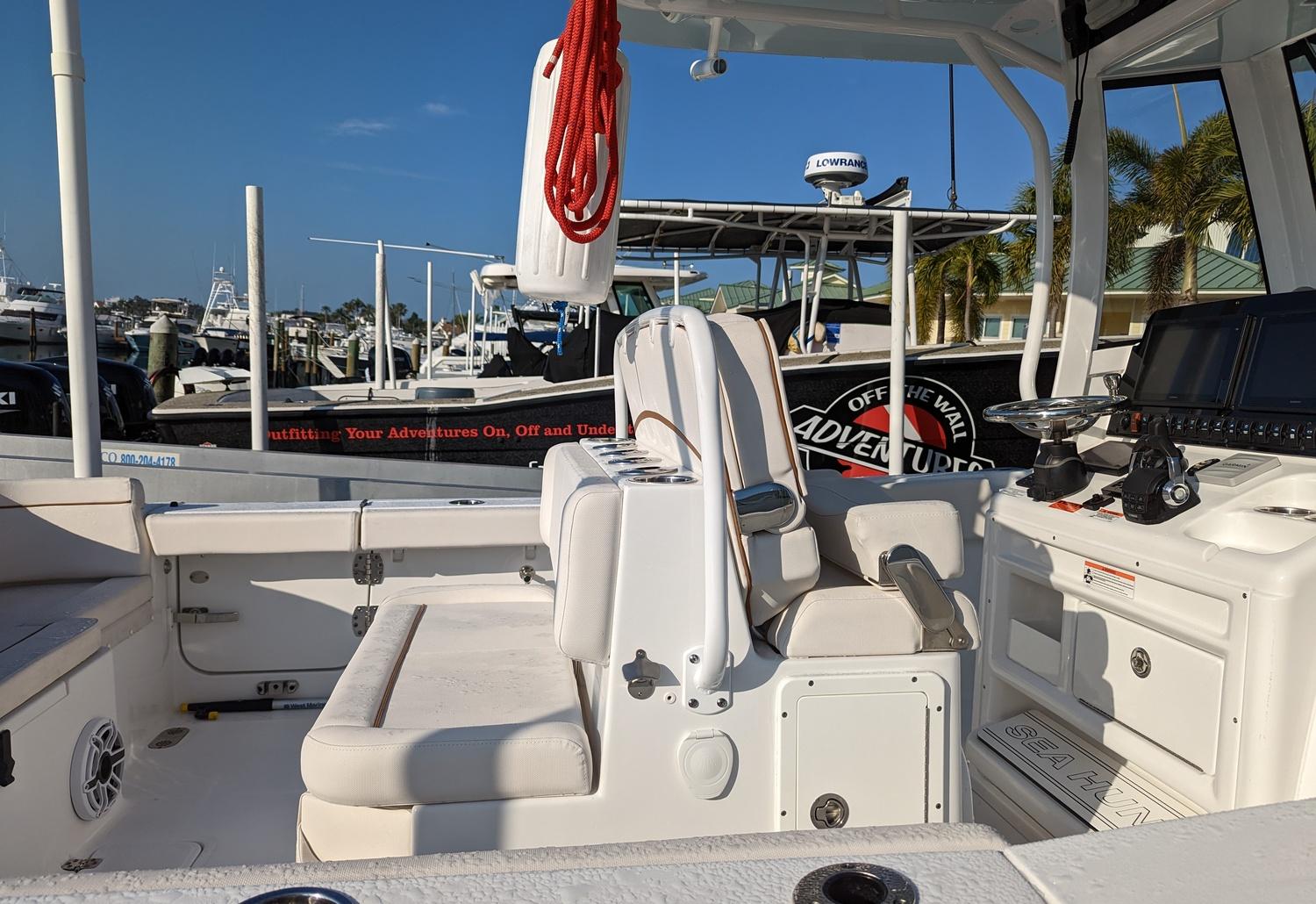 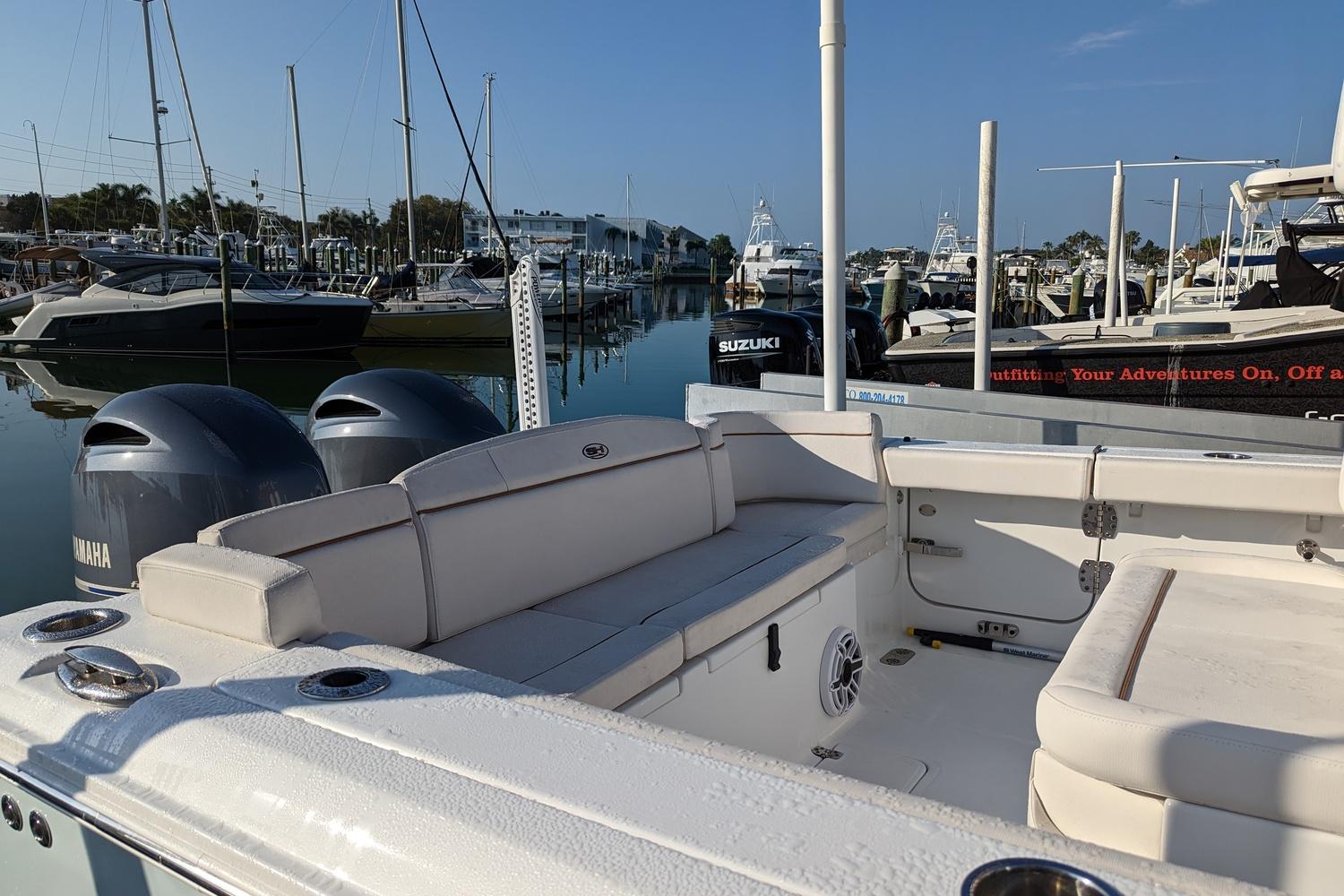 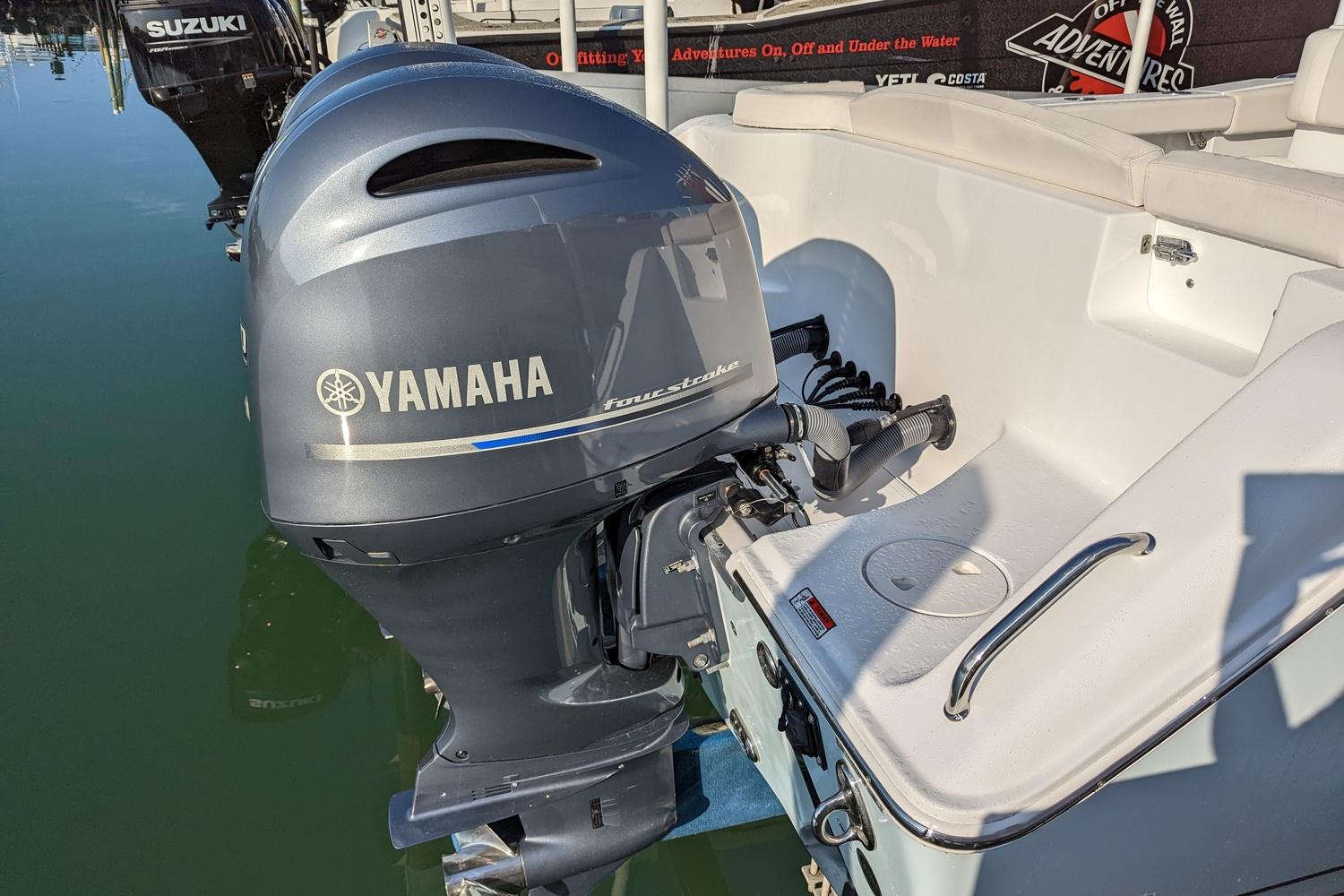 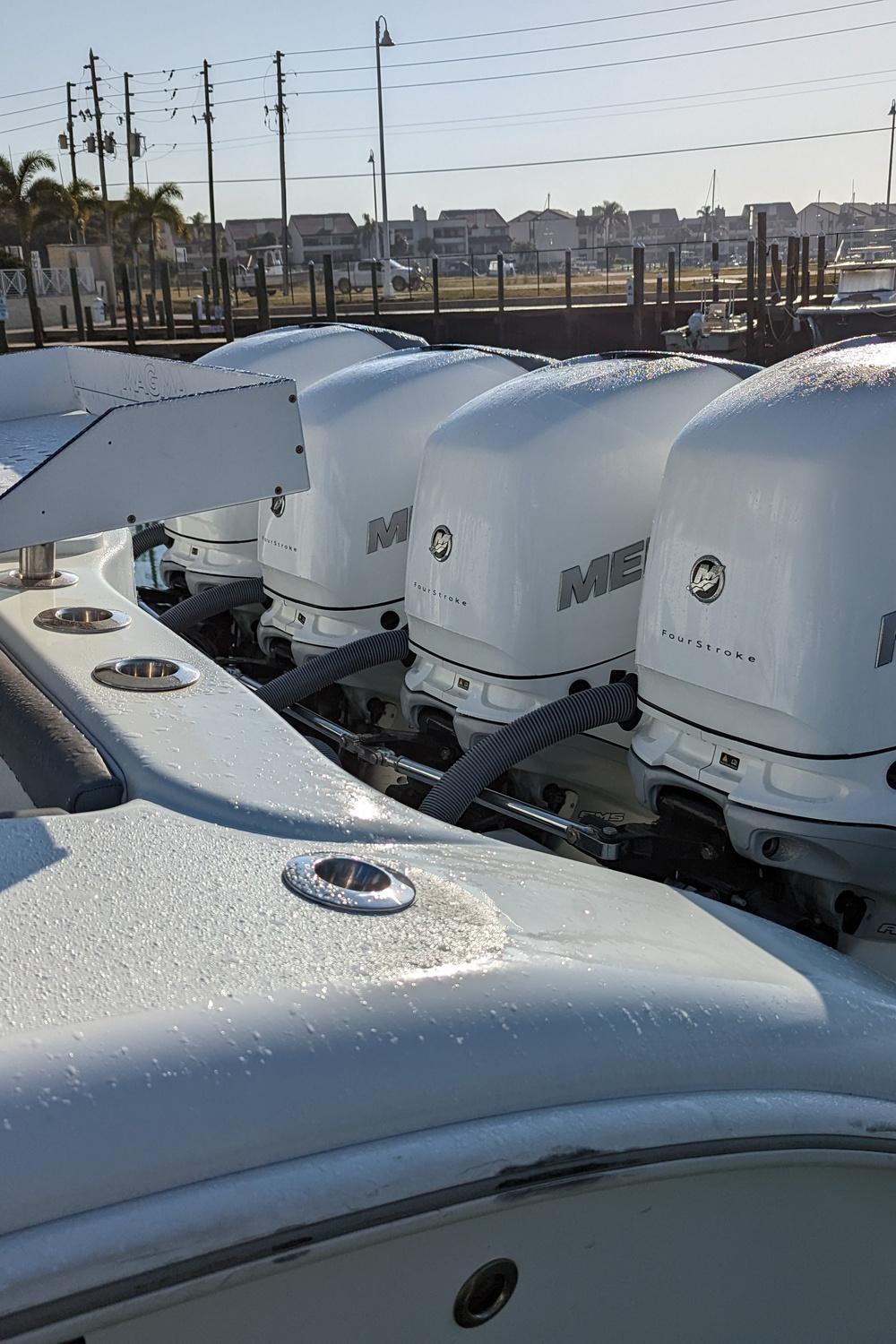 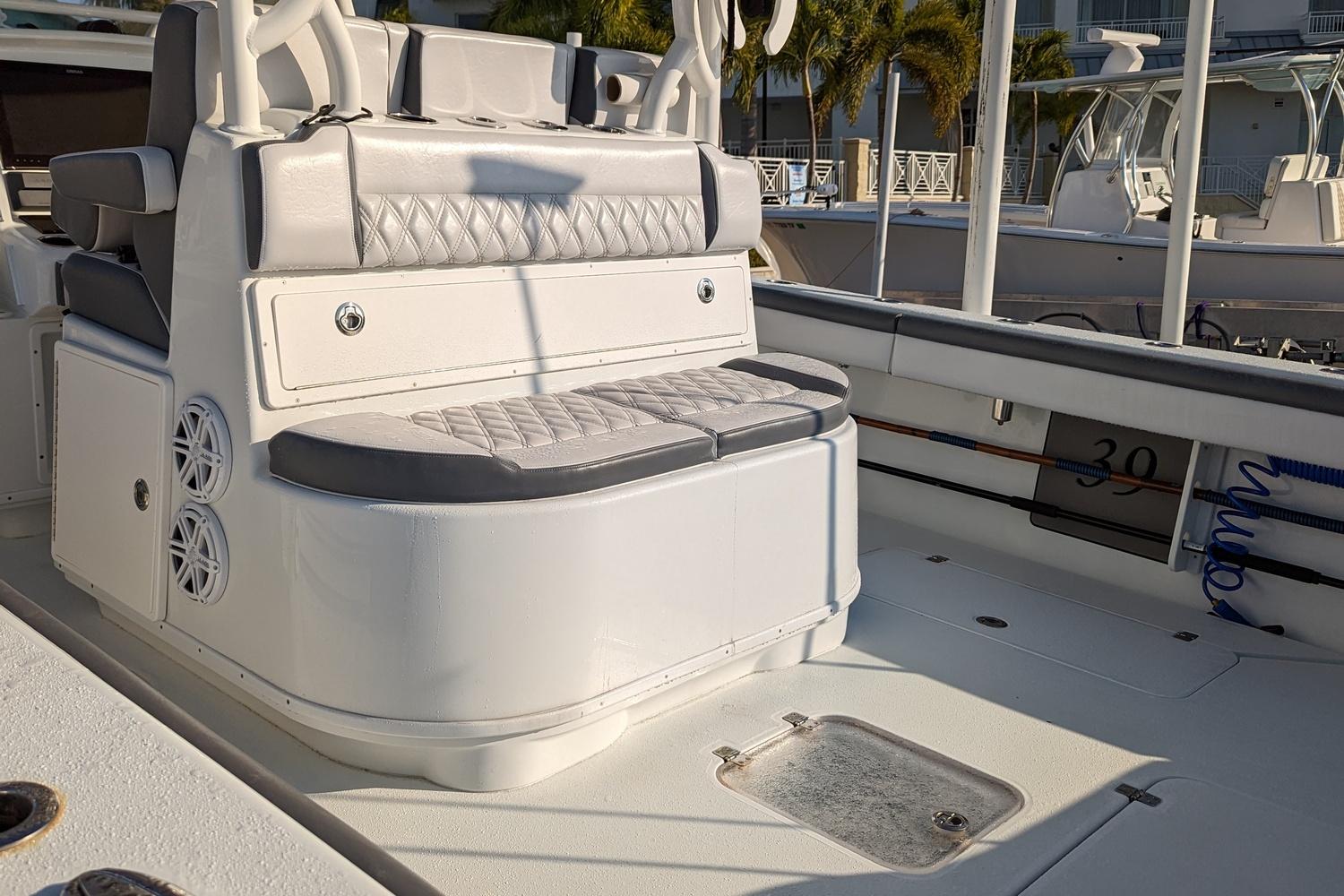 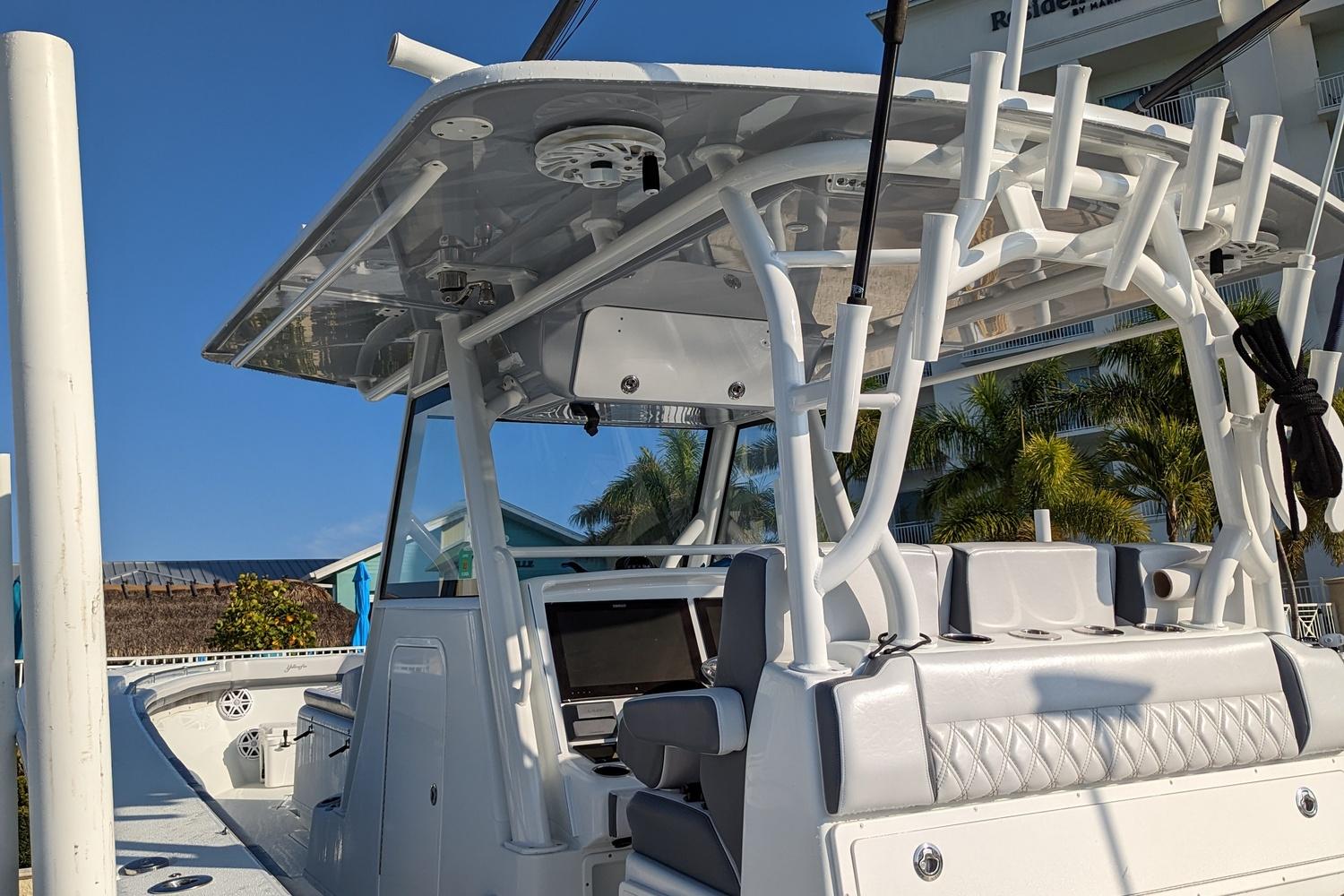 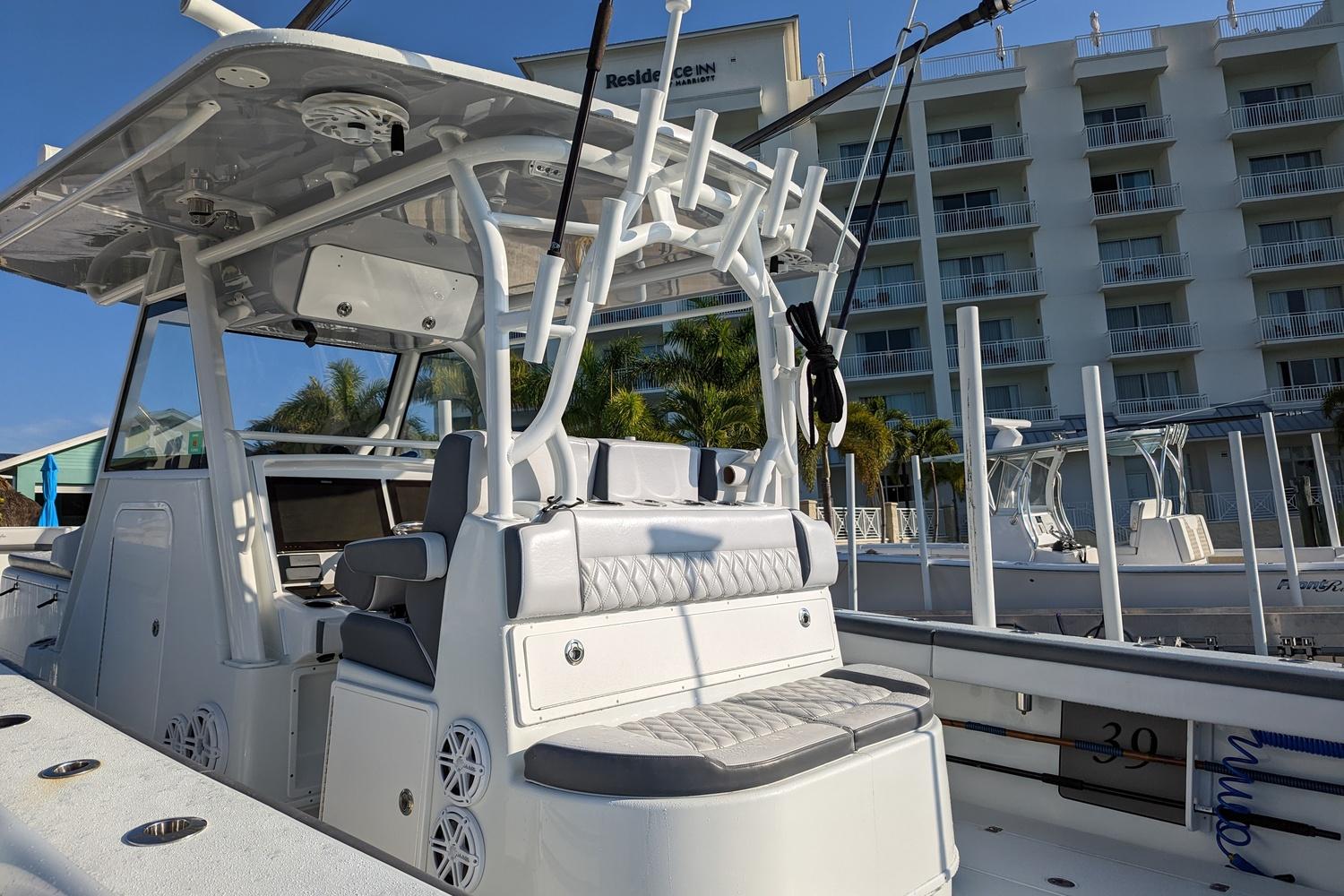 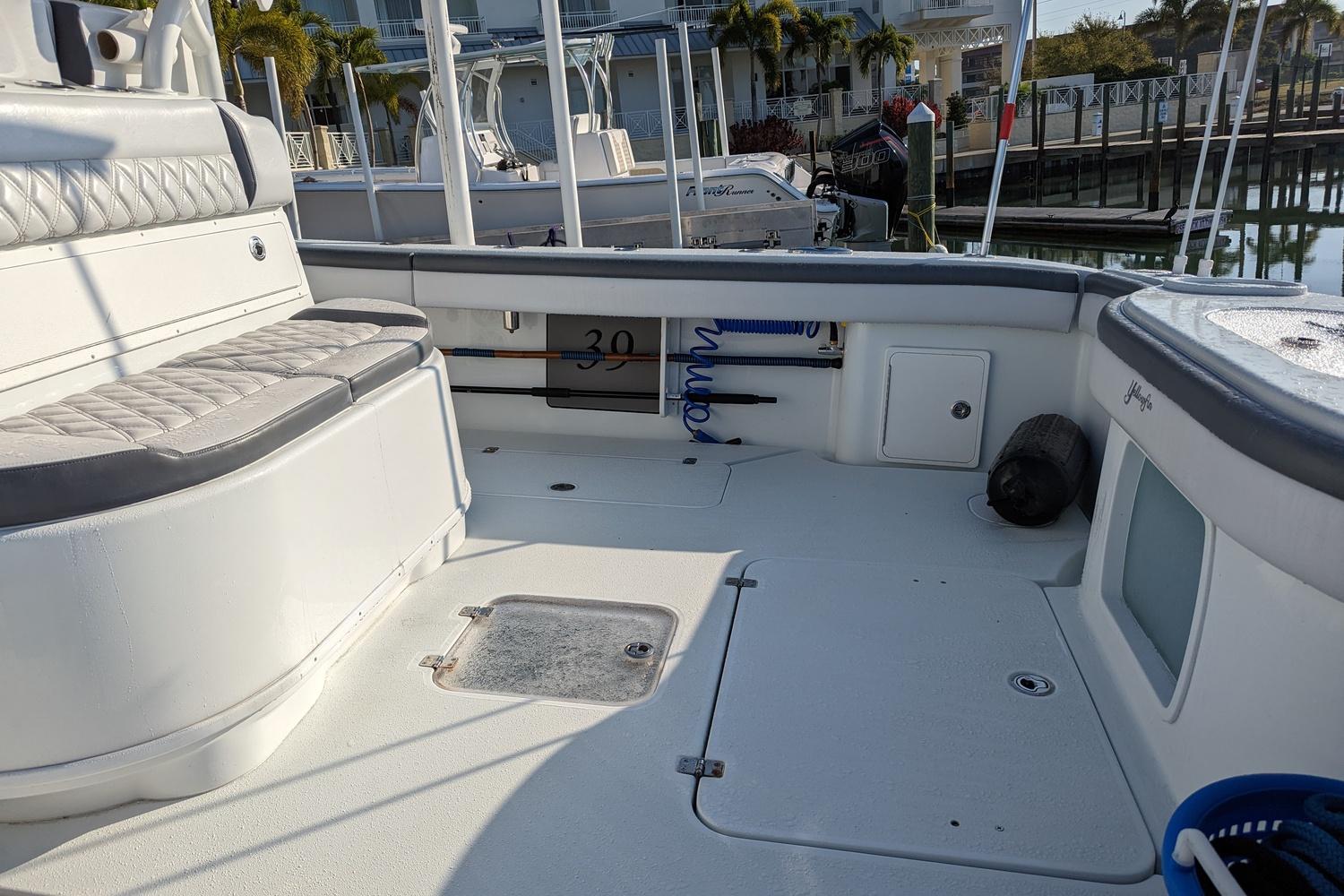 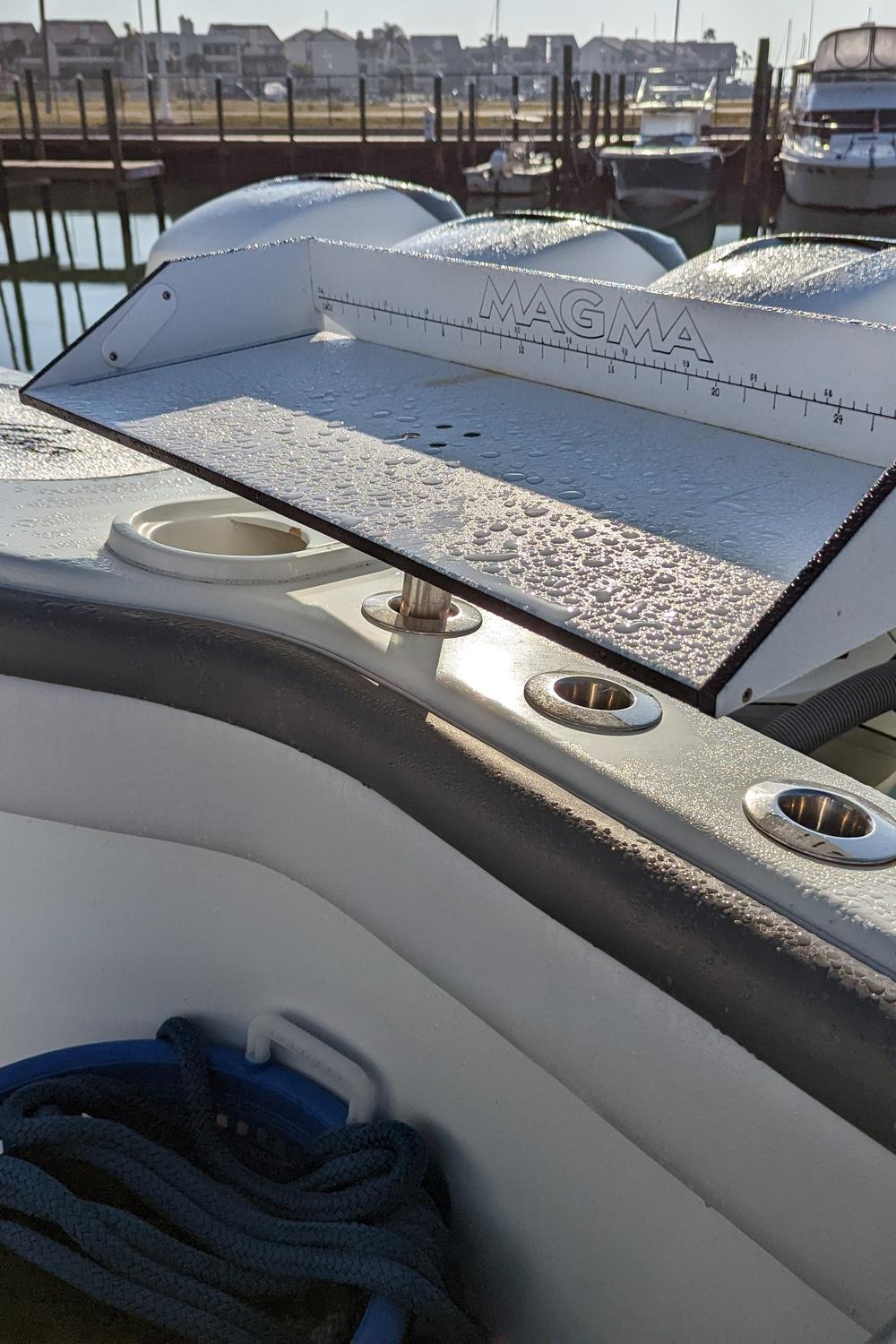 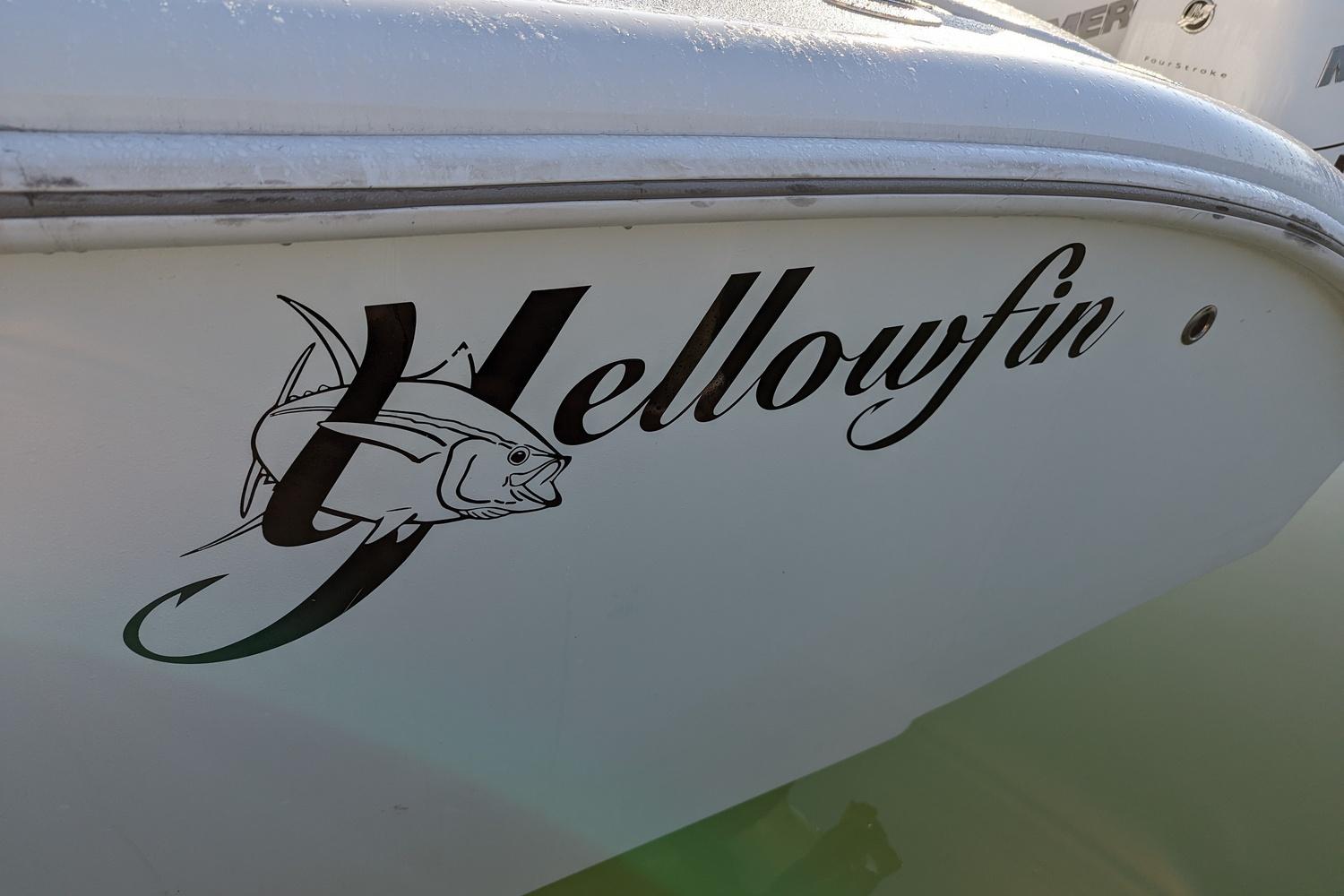 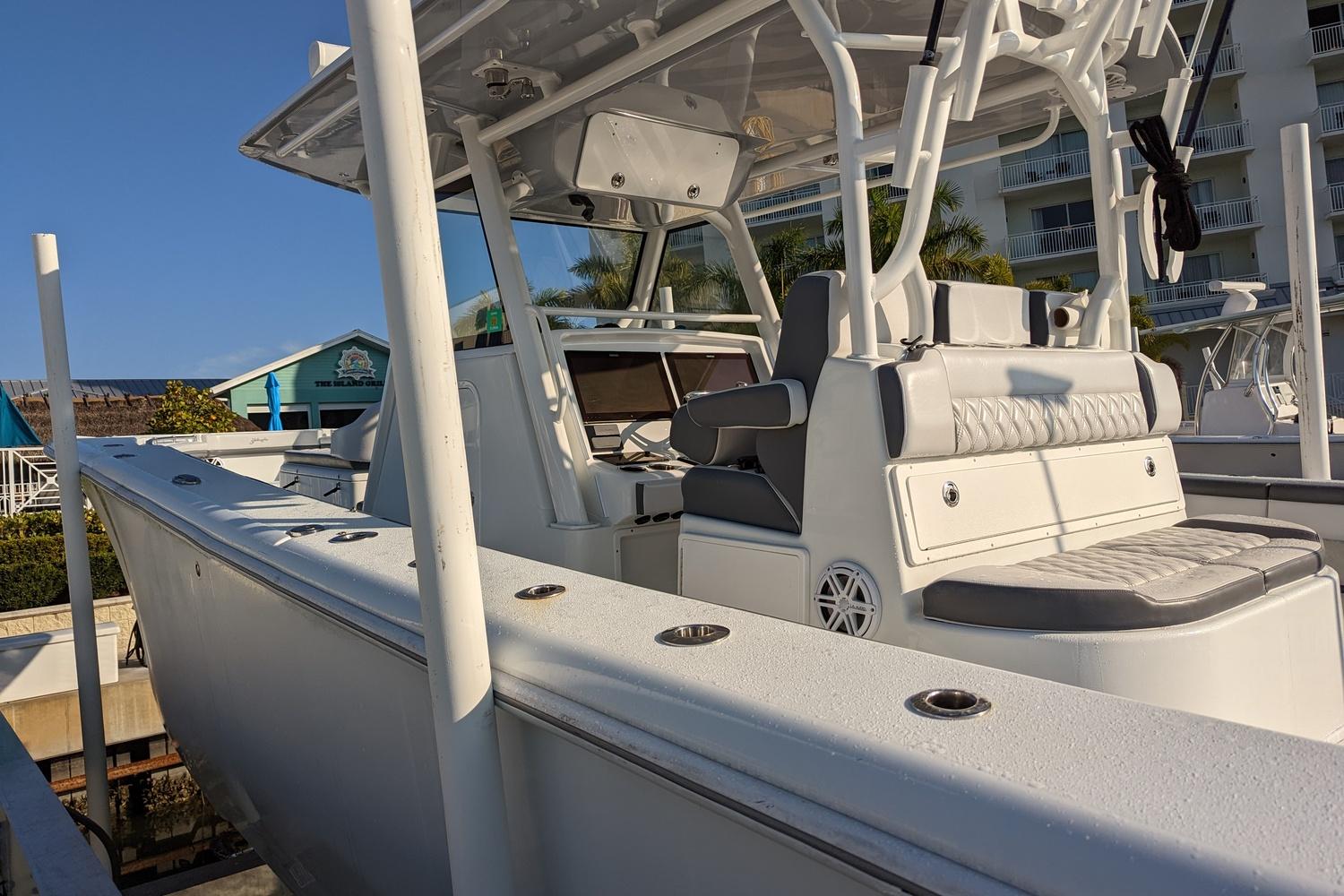 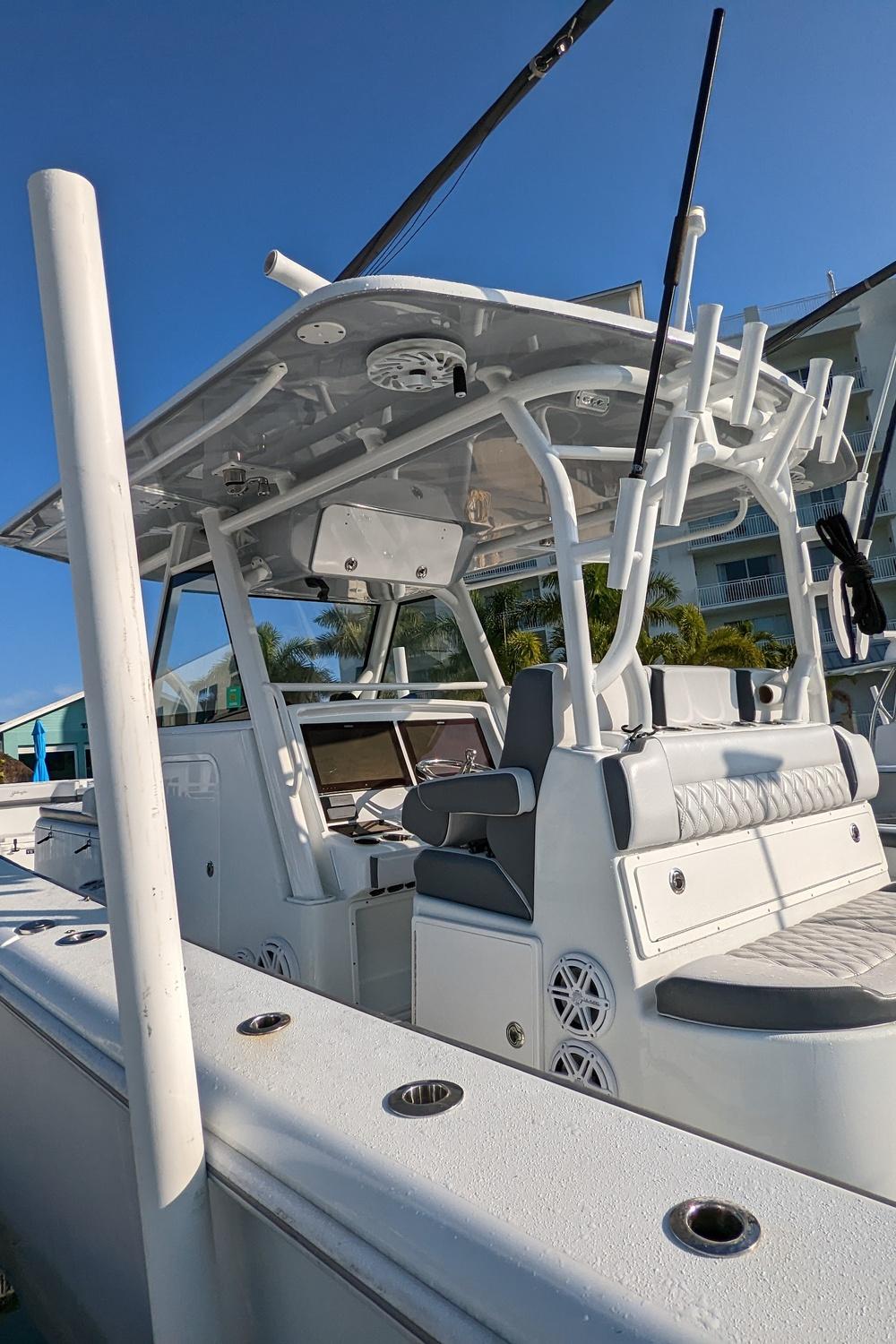 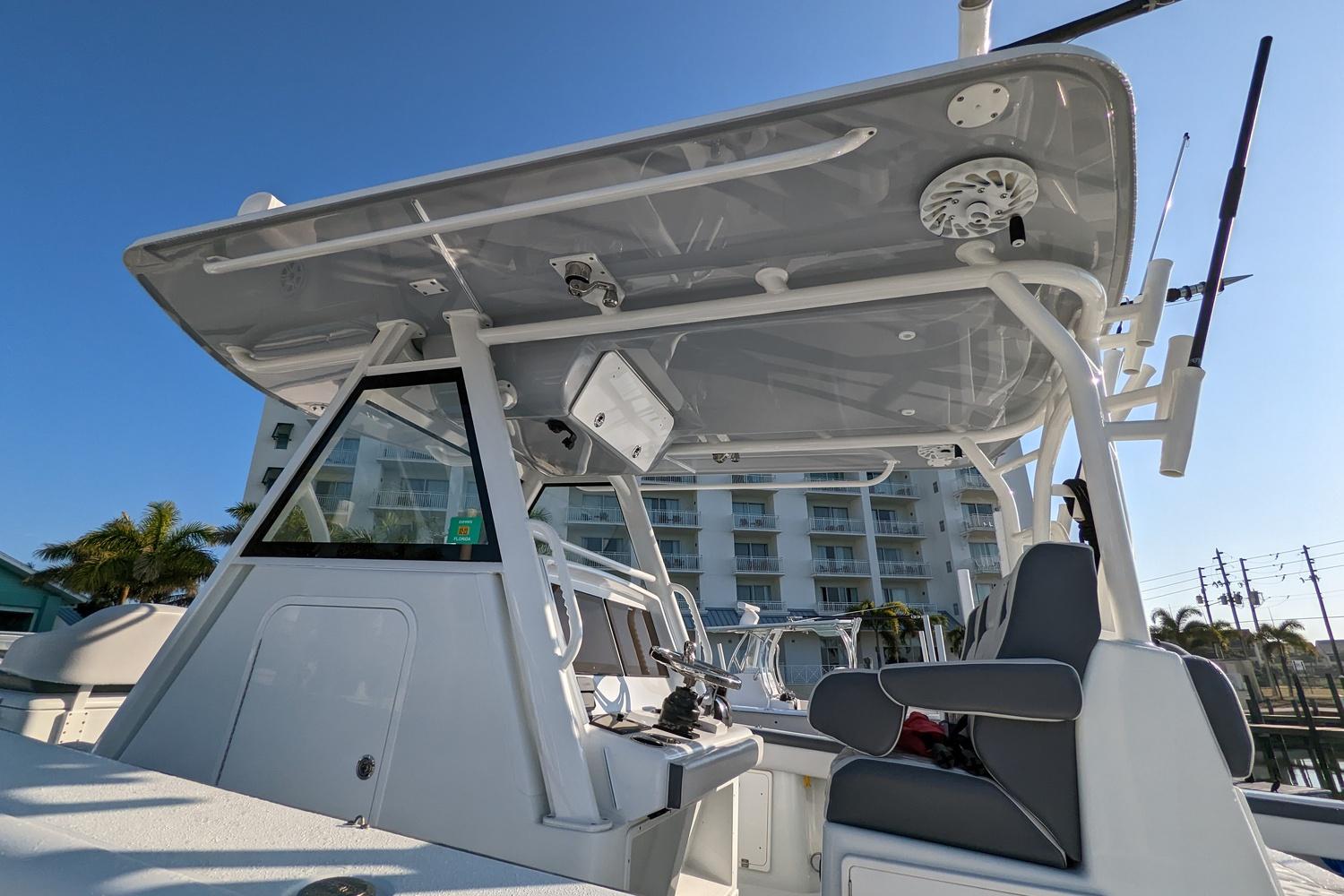 The United States has about 300 lakes larger than 10,000 acres. That works out to an average of six per state, and all of them offer outstanding recreational boating. To take full advantage of them, however, you need a boat that can handle potentially dicey conditions. You also want a boat with enough space to invite friends and family aboard. A lot of boats meet the minimum requirements, but the Crownline 270SS has something that many others lack: style and sportiness. Are they the SS in the model name? No, but they could be.

While outboard engines seem to be all the rage these days, there are certain things only sterndrive boats can do, most especially deliver a wide expanse of an uninterrupted swim platform, which is where people tend to gravitate. Our test boat’s back porch had the optional teak-style padding ($540), which replaces the standard Moonrock padding. Crownline adds some wow factor with an Aft Electric Sun Lounge Seat that changes from a rearward recliner for two to a sunlounger, with the push of a rocker switch. The raked windshield, with a stainless steel header, looks like a pair of green-tinted sunglasses, and I was grateful for its coverage, considering the temperature plummeted to 25 degrees on test day on Lake Lanier, north of Atlanta. Note to Crownline designers: A dam to block the walkthrough to the bow would be useful on cold days. Also upping the style quotient is the optional aluminum Moonstone sport arch ($9,270). It has a built-in sunshade and, like the rear lounger, can fold down electronically. The sunshade is designed so that the tow rope goes underneath it and ski spotters can catch some shade during the ski show. It’s a fair bet the best seats in the house are the ergonomically correct hot tub-style bowrider seats, in which one’s rear end is lower than one’s legs. Some Crownline detractors will point out that the butt-accommodating dip isn’t so useful when there’s a group of people sitting up front, but I think the benefit outweighs this mild annoyance.

Our 27-foot, 3-inch test boat was modestly powered by MerCruiser’s new-gen 6.2L V-8 350 hp engine that is one of the first sterndrives designed from the get-go to be a marine engine, not a converted automobile engine. Designers were able to correct problems that stem from the fact car engines are designed to be in front of passengers while marine engines go behind them. Now, instead of the throttle body (air intake system) pointing at the passengers, who can hear the air whooshing in to mix with fuel, it’s pointed aft. All service points were moved up and forward for easy maintenance. Its performance parameters were maximized for marine use. Paired with the Crownline F.A.S.T. Tab hull — full-length keel pad and vented chines that introduce air under the hull to reduce resistance — it’s a potent powerplant. Time to plane was 3.4 seconds, and time to 30 mph was 7.4 seconds. Top speed was just a full-sized marine journalist away from 50 mph (49.5). Another benefit of Crownline’s F.A.S.T. Tab hull design is readily apparent while idling toward open water: no stern wander, which affects many sterndrive-powered boats.

Although test-day conditions were Yukon-like, it was flat calm, so we couldn’t show off Crownline’s excellent rough-water ride that starts with the hull’s 39-degree entry. A full-length keel pad makes it run more level than most other planing hulls, and the bow-down orientation helps the sharp bow slice through waves. Its deep-V 21 degrees of deadrise at the stern continues the cleaving action. With more hull contacting the water, it rides like a larger boat. The vented chine design helps the 270SS turn really well; I turned it to its locks and it didn’t blow out. Being solidly built and having a deep-V design allows the 270SS to plow up a tight, medium-size jumping wake for boarders at about 20 mph. At slalom speeds, the wake is still fairly lumpy but certainly manageable. For entertaining, it has a large cockpit table that stores out of the way in a drawer in the ski locker when not in use. Twin Igloo coolers for the bow and cockpit have dedicated storage under the seats. The standard 270SS maximizes passenger room, so behind the captain is an abbreviated sofa to add to the seating provided by the cockpit’s L-lounge. You can add an entertainment center, complete with running water and a refrigerator. A companion bucket resides to port, and just in front is a large head compartment that has a vanity and a sink. It comes with a Porta Potti, which can be optioned up to an electric flush model with a pumpout ($1,440). And because its beam is 8 feet, 6 inches, there are no towing restrictions, which isn’t always the case with a boat of this size. A standard 270SS is a fully loaded boat with surprising extras, such as the Raymarine A65 touchscreen GPS, which also displays engine information. Also included is a combo depthfinder/air- and water-temperature gauge, and our boat’s helm had a real wood Executive steering wheel ($350) that elevated its elegance factor. A must-have is MerCruiser’s Digital Shift and Throttle (DTS); it costs $4,290 but delivers a drive-by-wire control system. Also gratis is a six-speaker Jensen Bluetooth stereo system, but most buyers will probably pump up the jam with one of Crownline’s six stereo options, culminating with a Polk Audio stereo and Wet Sounds speakers for the deck and tower, plus a subwoofer and transom remote ($5,540).

Engine options range from 300 hp (don’t do it!) to 380 and 430 hp, but anything more than the 350 hp our boat had will require a jump to an 8.2L block that is not part of MerCruiser’s new-gen of in-house sterndrives. Trim tabs are always a good add-on ($1,070), and if skiing is on the agenda, the Perfect Pass Wakeboard Pro cruise control is well worth the extra $2,140.

Purchased by John and Sherry Odom, plus Sebastian, 10, and Sophia, 8, Smyrna, Ga.


The pull-up cleats seem a little loose; it’s a minor thing, but I wish they locked more firmly when up.

Sherry and I grew up boating and stayed in the sport by renting boats. When we figured we had rented 20 boats and the kids were getting older and really liked boating, we decided to buy. We started off looking at Regals and liked them pretty well, but when we drove the Crownline we knew that was the right boat for us. We like to go tubing, kneeboarding and skiing, as well as just dropping the anchor in a cove and going swimming. We keep our boat on Lake Lanier, and it’s a huge lake, so we like having a larger boat for safety when it gets rough. There are also some really nice boutique lakes in this part of Georgia, such as Lake Burton, that are also fun. My wife and I like to fish, and even though the Crownline isn’t a fishing boat, we can fish off the stern easily. WaterSports Central has made the boat-buying experience a pleasure. The customer service after the sale has been excellent.

One thought on “Crownline 270SS”