Cypress Cay’s Seabreeze 230 takes the oxymoron out of the phrase “affordable luxury.” 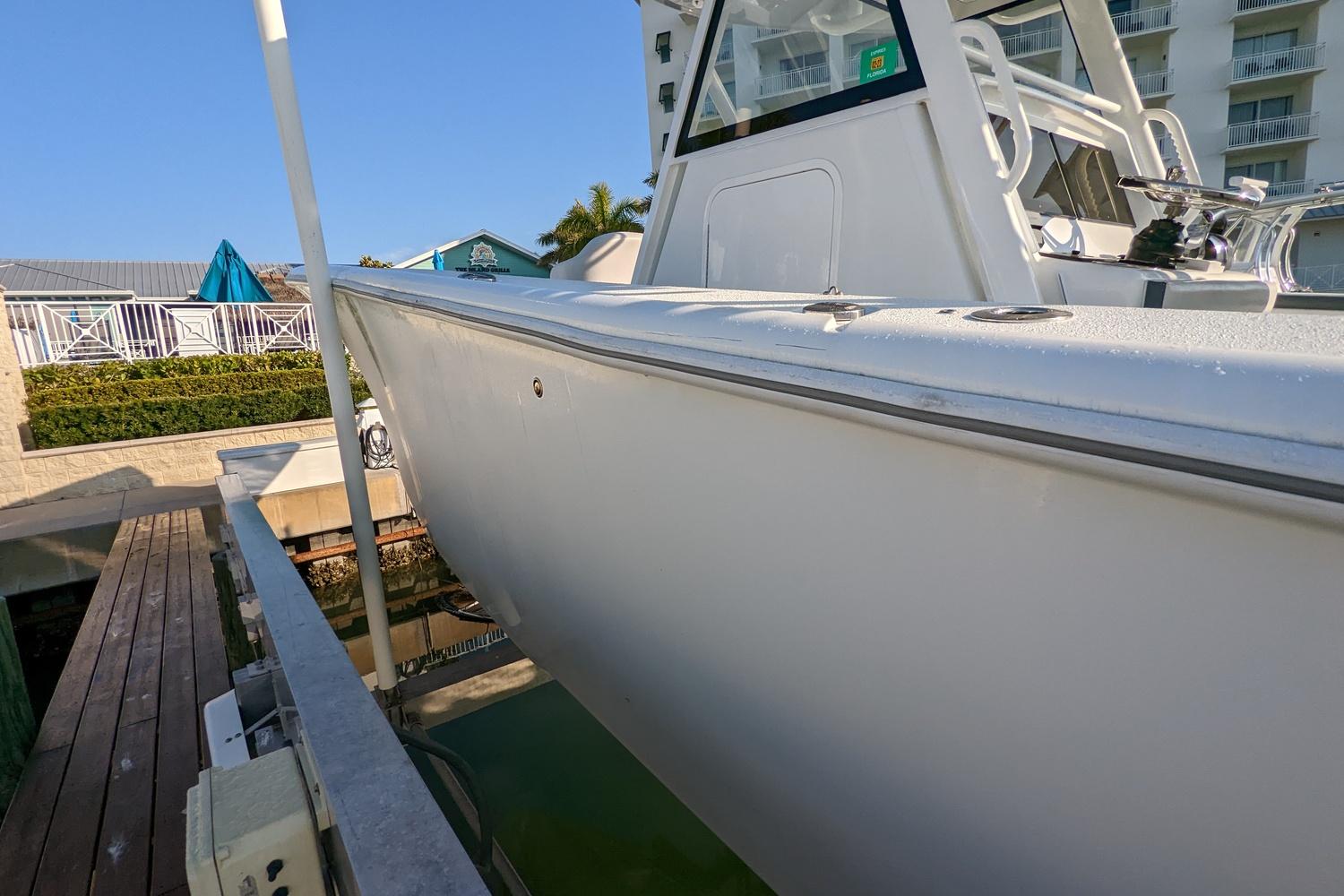 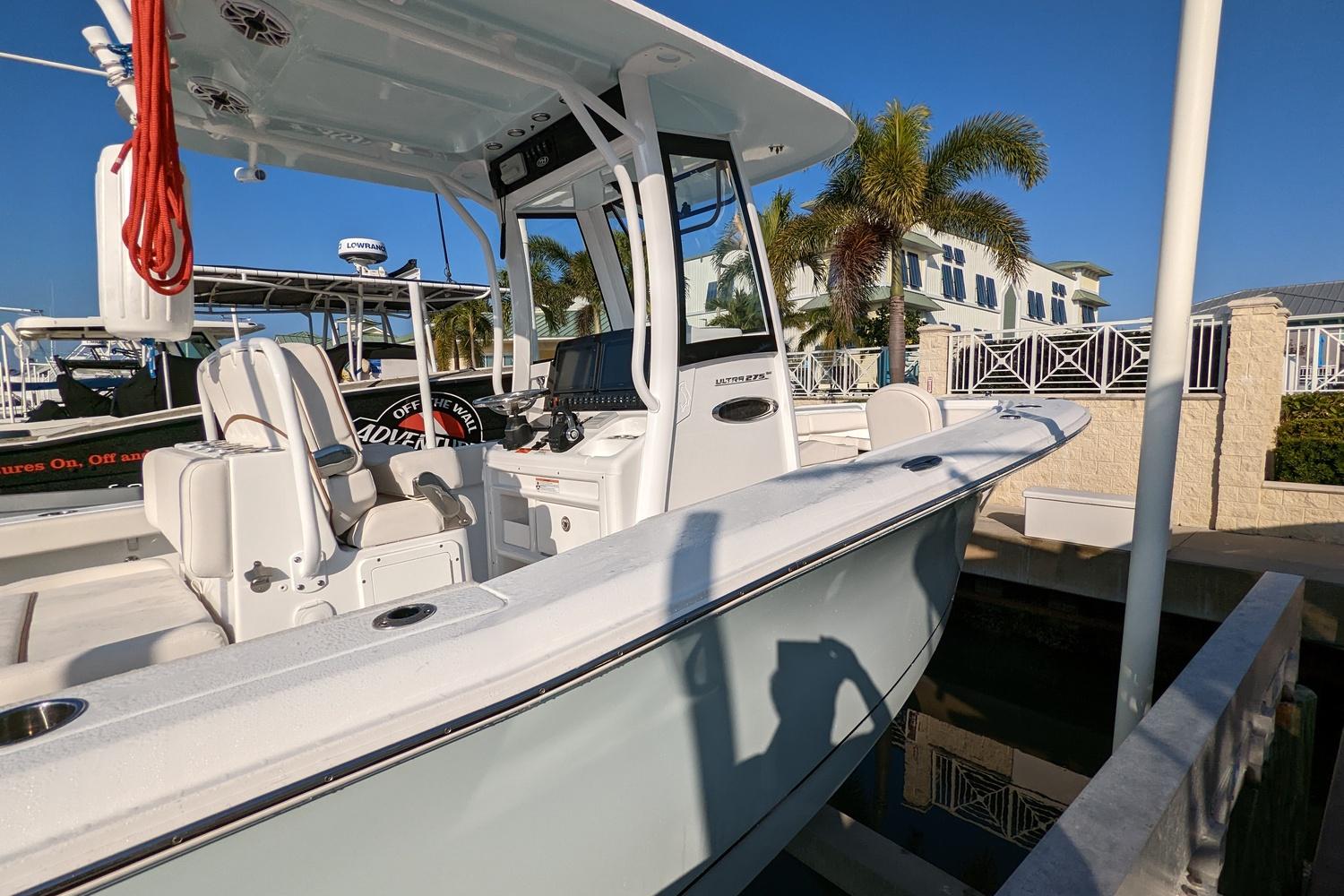 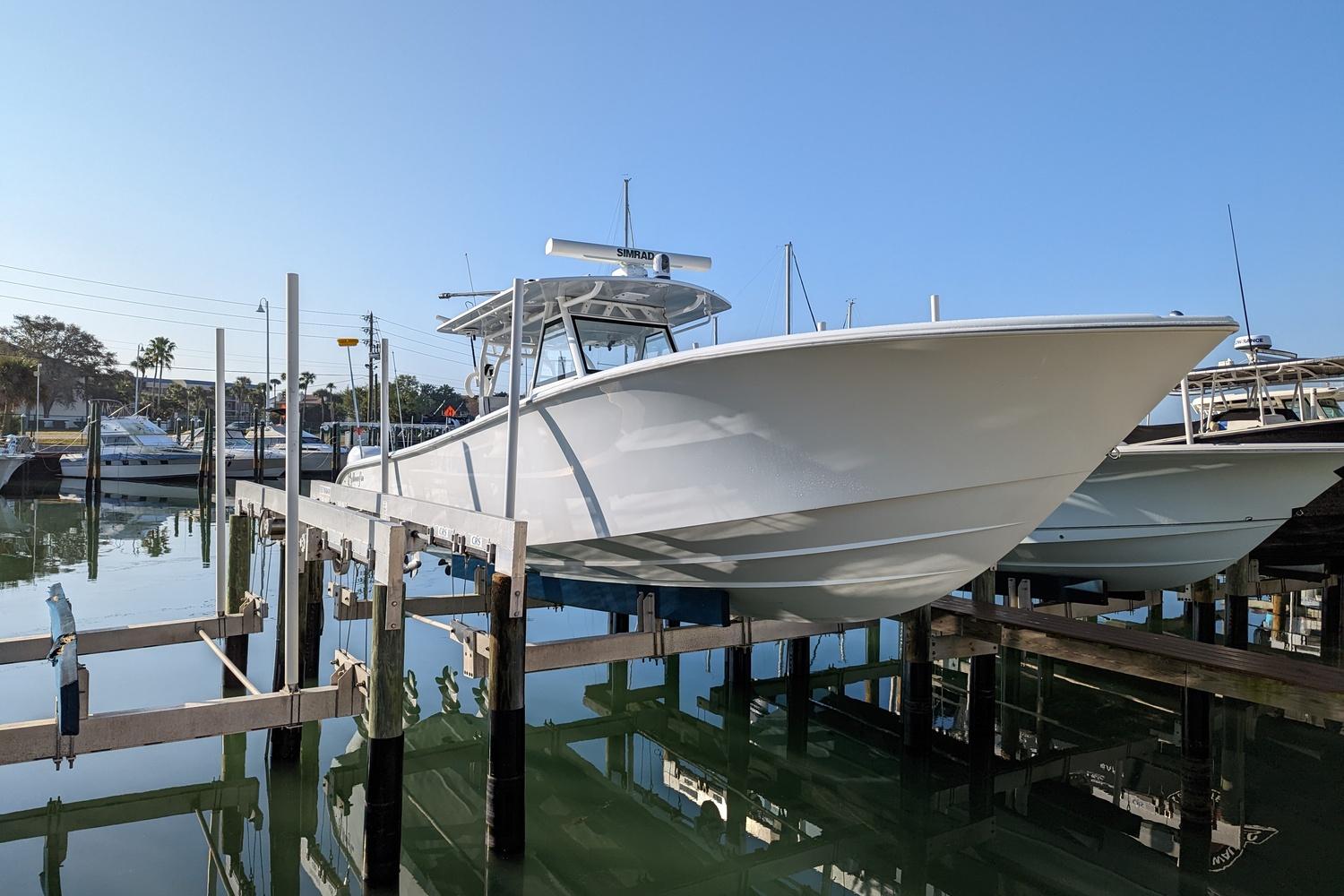 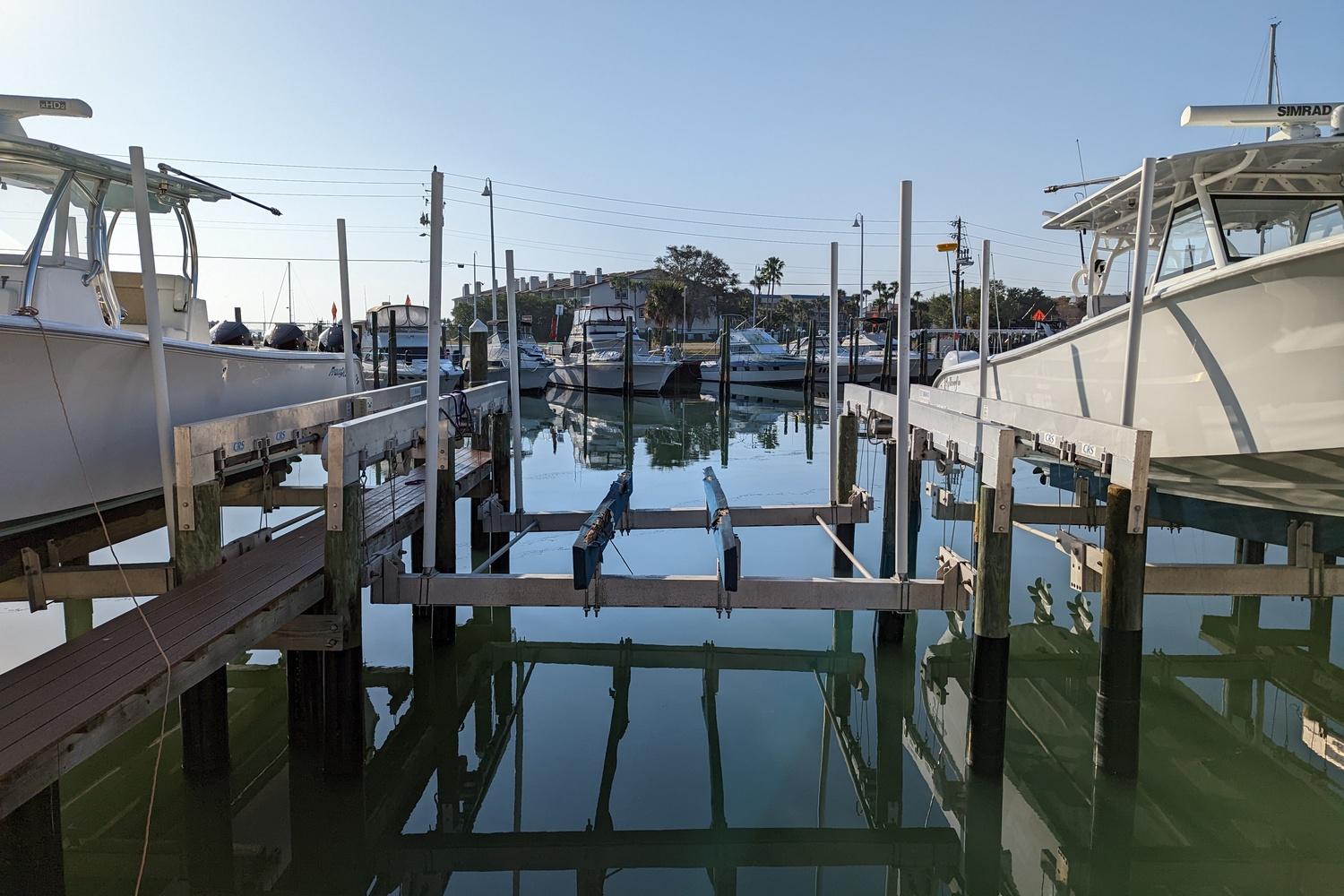 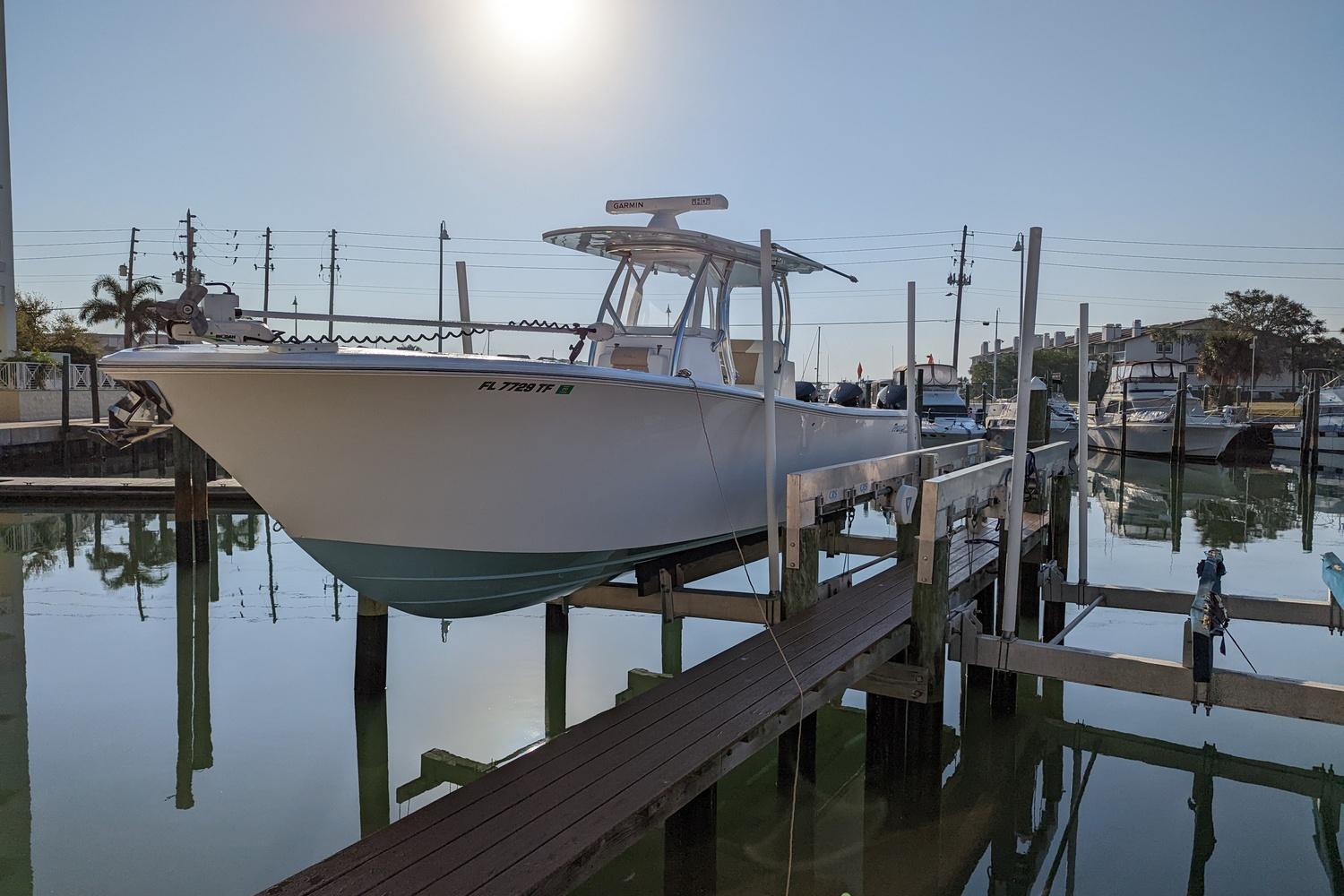 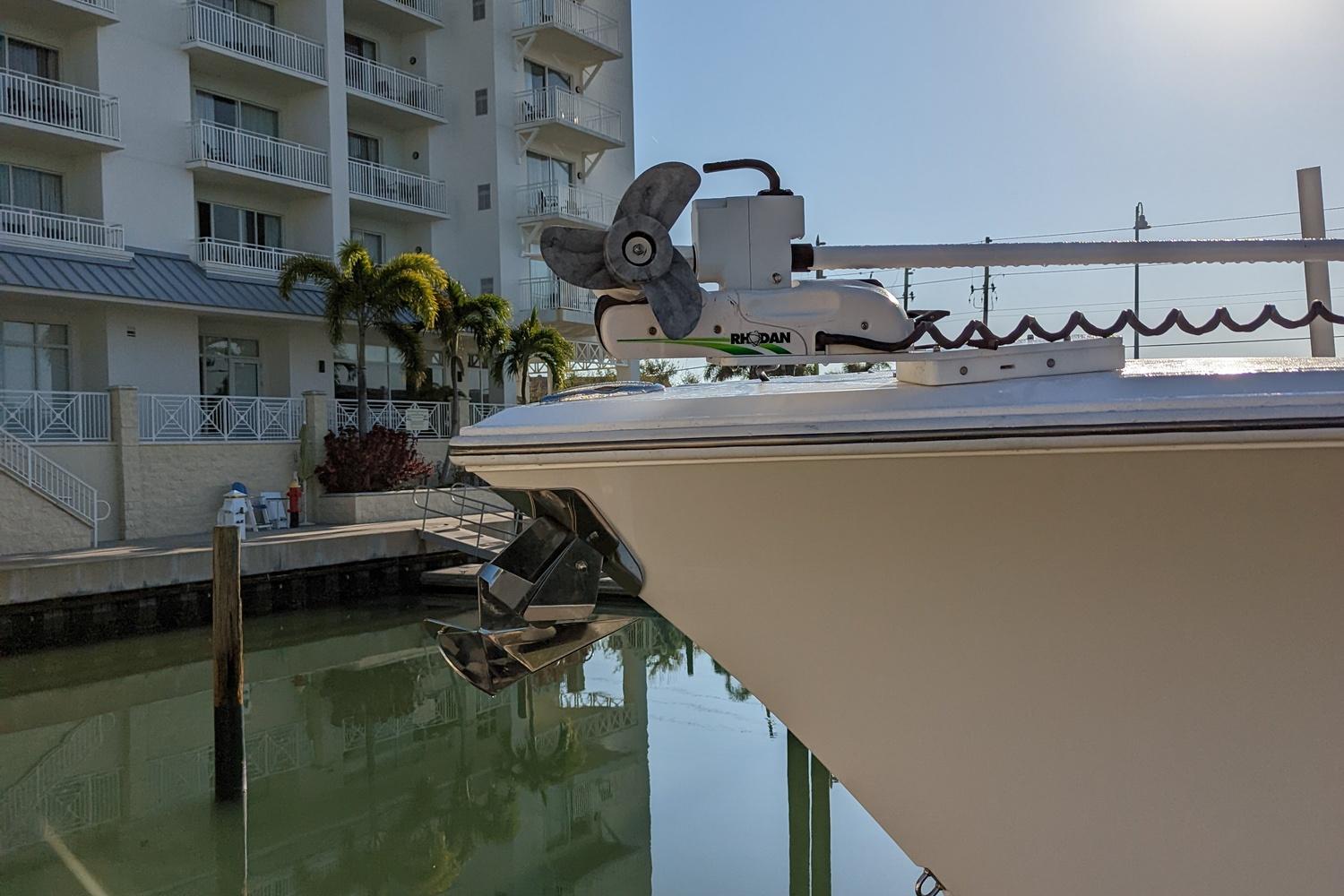 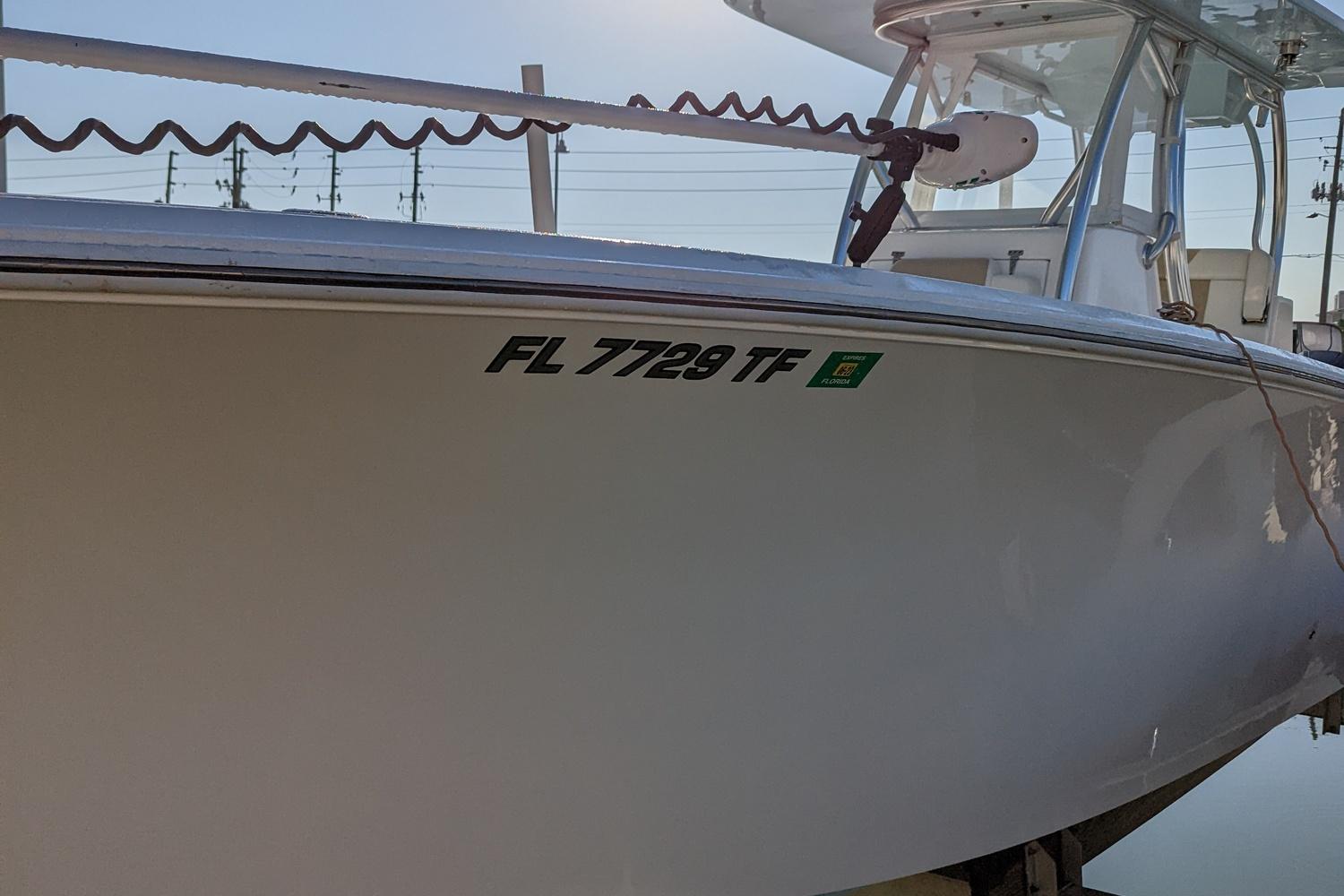 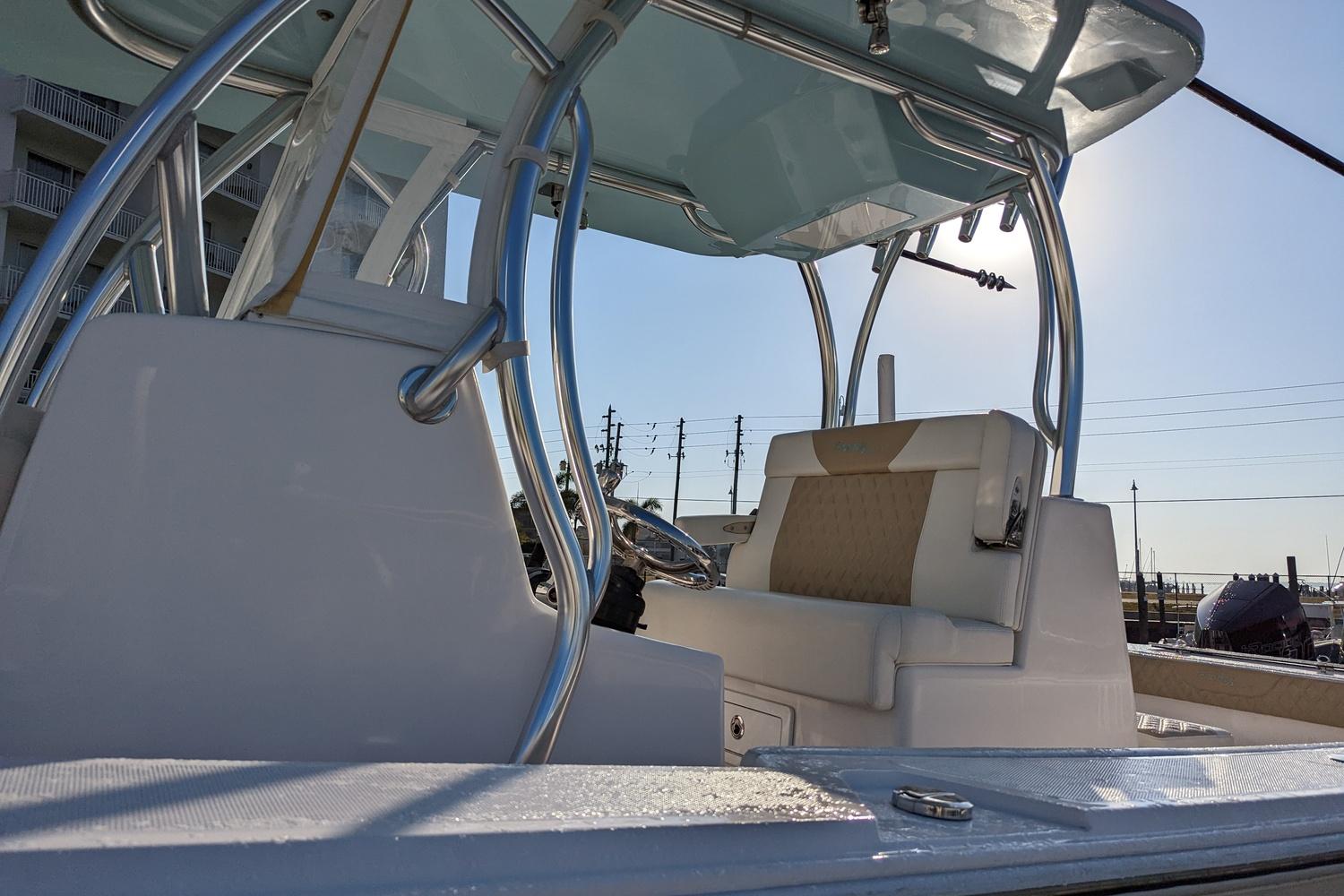 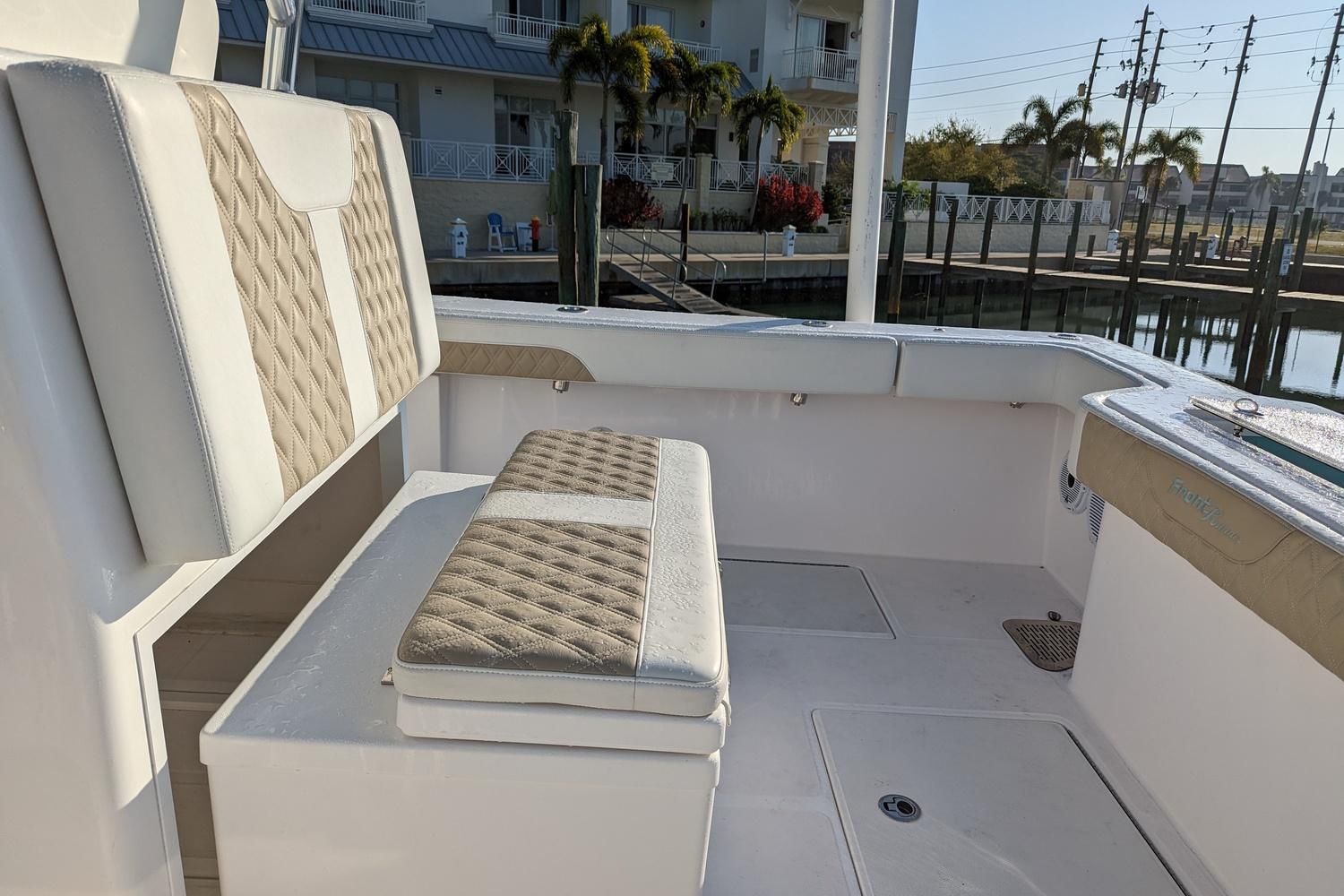 These days it’s not too hard to find a luxury pontoon. The high end has been red hot as manufacturers battle to outdo each other when it comes to creature comforts and performance. But this battle of the brands has a price, and it doesn’t take much for the bottom line to approach or exceed six figures. Cypress Cay has several top-of-the-line models — witness the Cayman SLE 250, which can be optioned north of $100K — but its Seabreeze line of affordable pontoons can achieve a surprising level of luxury with a few carefully chosen options. The Seabreeze 230 we tested is the poster boy for this alternate path.

While the Seabreeze 230 has been around for a few years, for 2016 it underwent a transformation that added some pizzazz without blowing up its price. The outward look is different thanks to a new Sport Graphics package ($240) that gives it a squirt of Lime Green over Black Sand fencing and pewter rails, which our test boat had. There are five fence color choices and five Sport Graphics picks that can be substituted for the five wider accent colors, which run $530.

Inside, you have some new upholstery choices, including the standard Alabaster or Alabaster Pillow Top ($580), which has an upscale three-tone color scheme. A new helm design includes an optional six-spoke Sport wheel ($80) that’s one of the nicest I’ve seen this year. I just wish the helm’s dash had a little more real estate for adding big-screen electronics without having to resort to a gimbal mount. I’ve been chanting one mantra for the past few years (at least for owners who want decent performance out of their pontoon): Get three tubes, or twin boat-hull-shaped tubes, and at least 150 hp. The Seabreeze 230 proves the point. It’s powered by Mercury’s new 150 FourStroke, which is the lightest outboard in its class thanks to a simpler single overhead cam design that only requires two valves per cylinder (instead of the usual four found on dual overhead cam designs). It also comes in at $4,000 less than the Honda BF150 option Cypress Cay offers.

A two-tube Seabreeze 230 comes with as little as 9.9 hp (don’t do it!), but three tubes with the Performance Package Plus option is the way to go. It includes triple 25-inch tubes, an aluminum underskin, lifting strakes and hydraulic steering, for $3,270. The tube setup, combined with the Merc 150 EFI FourStroke, gives it plenty of performance for watersports and fast-forward cruising. The slightly helm-forward configuration of the CWEC floorplan (Center Walkthrough, Entertainment Center) pushes the weight forward a bit, to help give it a quick time to plane of 2.7 seconds. Zero-to-30 mph time was 8.5 seconds, and the Mercury pulled strong throughout the power band. Top speed was a respectable 38 mph. This tube setup can accommodate up to 200 hp, which would put its top speed into the low 40s. Doing so would require the jump to a supercharged Mercury Verado that would bump the price by $5,780 but would also deliver drive-by-wire DTS steering. The Honda BF200 increases the tariff by $9,790, so the Mercury 150 FourStroke looks to be the pricing/performance sweet spot here. The 230 sits in the Momma Bear chair of the three Seabreeze models — the 210 and 250 are the others. This 23-footer is large enough for 13 lucky passengers but small enough to be really easy to handle. The outer tubes don’t have lifting strakes, so in a hard turn it leans in just a bit and bites very well in the water for quick pickups of downed skiers. With just a little trim, the nosecones come out of the water for less drag. The ability to easily trim up is especially important for the floorplan with the large entertainment center to starboard behind the skipper, because that leaves most of the seating forward — especially if you get the filler cushion for the bow gate that turns the bow section into a giant U-lounge. The aforementioned Entertainment Center ($3,670) comes with two large working surfaces and a sink with a pump spigot. There’s also an insert for an onboard grill ($230).

Watersports are definitely a possibility with the optional stainless steel tow bar ($490). The rear deck isn’t huge, but because the engine is mounted on a bracket, the space that is there is all usable. Upgrade to a stainless steel four-step boarding ladder and add an in-floor ski locker.

Our test boat included a double Bimini top ($1,290), which is the equivalent of having air conditioning on blazing days. You can turn it into a camper or an all-weather cruiser with a full enclosure ($4,000) that includes the double Bimini. The triple-tube option bumps the fuel capacity by an extra 10 gallons, for a total of 40 gallons, giving the 230 decent range for cruising.

Cypress Cay takes an á la carte approach when it comes to options — more than 100 — and that’s smart because buyers can ratchet up the luxury factor according to their needs and budget. The base price is attractive at $30,750 (including a Mercury 150 FourStroke), but even nicely loaded its price stays around $40K. For instance, our test boat had the double Bimini, triple-tube Performance Package Plus and Entertainment Center, optional tilt wheel, speedometer, depthfinder, stainless steel boarding ladder, Sport Graphics package and Gray Woven Teak vinyl flooring ($1,570) for an as-tested total of $41,637. The standard stereo system is a two-speaker Jensen Bluetooth unit, which is really only a starting point. Jensen used to be synonymous with less-than-desirable stereos, but over the past few years I’ve noticed a marked improvement in quality. At this year’s Water Sports Industry Association Summit, I found out why when I chatted with a company representative. Since 2012, Jensen and Polk Audio — one of the leading marine stereo companies — have been under the same ASA Electronics roof, and its engineers have shared technology, raising Jensen’s audio bar in the process. That’s why Cypress Cay’s intermediate stereo upgrade includes a mixture of the two brands ($450). But Polk Audio is still the Cadillac to Jensen’s Chevrolet, and the premium system for this model is an all-Polk head and speaker combo that’s still a reasonable $720. The only sonic bummer is there is no subwoofer option.


We can’t think of anything we would change.

We’ve always had smaller boats, such as a Glastron runabout and, most recently, an Alumacraft fishing boat, but we wanted more room. We have six grandkids who are getting old enough to go boating, and we have lots of friends we would like to take out. I wasn’t really thinking about getting a pontoon, but when I saw the 230 Seabreeze, I was hooked. We keep our boat at Frontenac Harbor, where we bought it, on Cayuga Lake, which is one of the Finger Lakes. It’s 40 miles long, so we wanted something fast enough to be able to explore and go to places we like, such as the Deer Head Inn and Wolfies. We also like to fish for largemouth bass and it’s really easy to do on a pontoon. We’ve had as many as 12 people on board, and there was plenty of room for everyone. We mostly cruise around or stop for a swim, and I imagine the kids will want to do some watersports as they get older. Frontenac Harbor has been great. When I first got my boat, I left the battery switch on and it was dead when we went to take it out. They just swapped it for a new battery at no charge, and off we went.

One thought on “Cypress Cay Seabreeze 230”