Formula's 330 CBR is an outboard-powered bowrider that holds a hidden surprise. 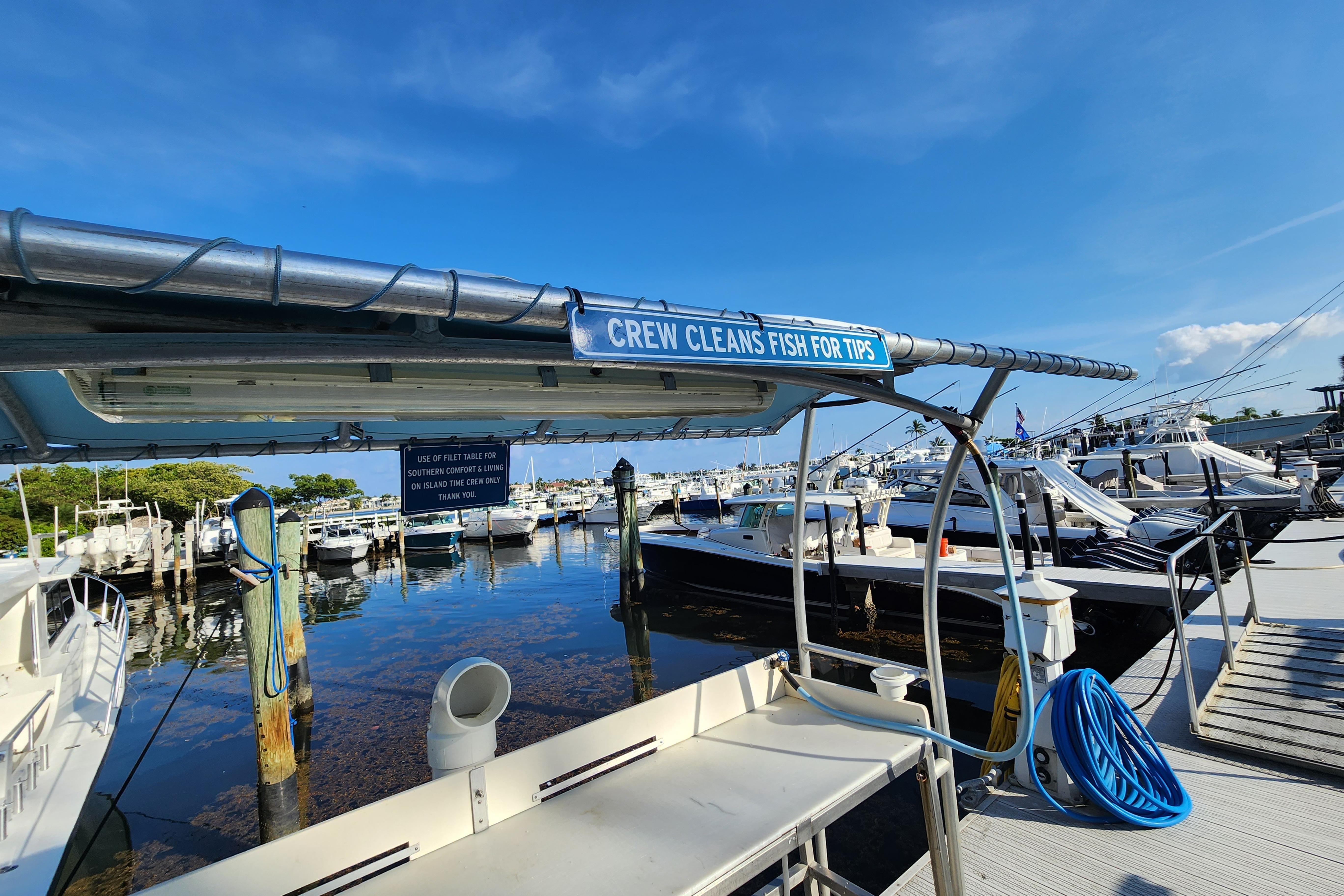 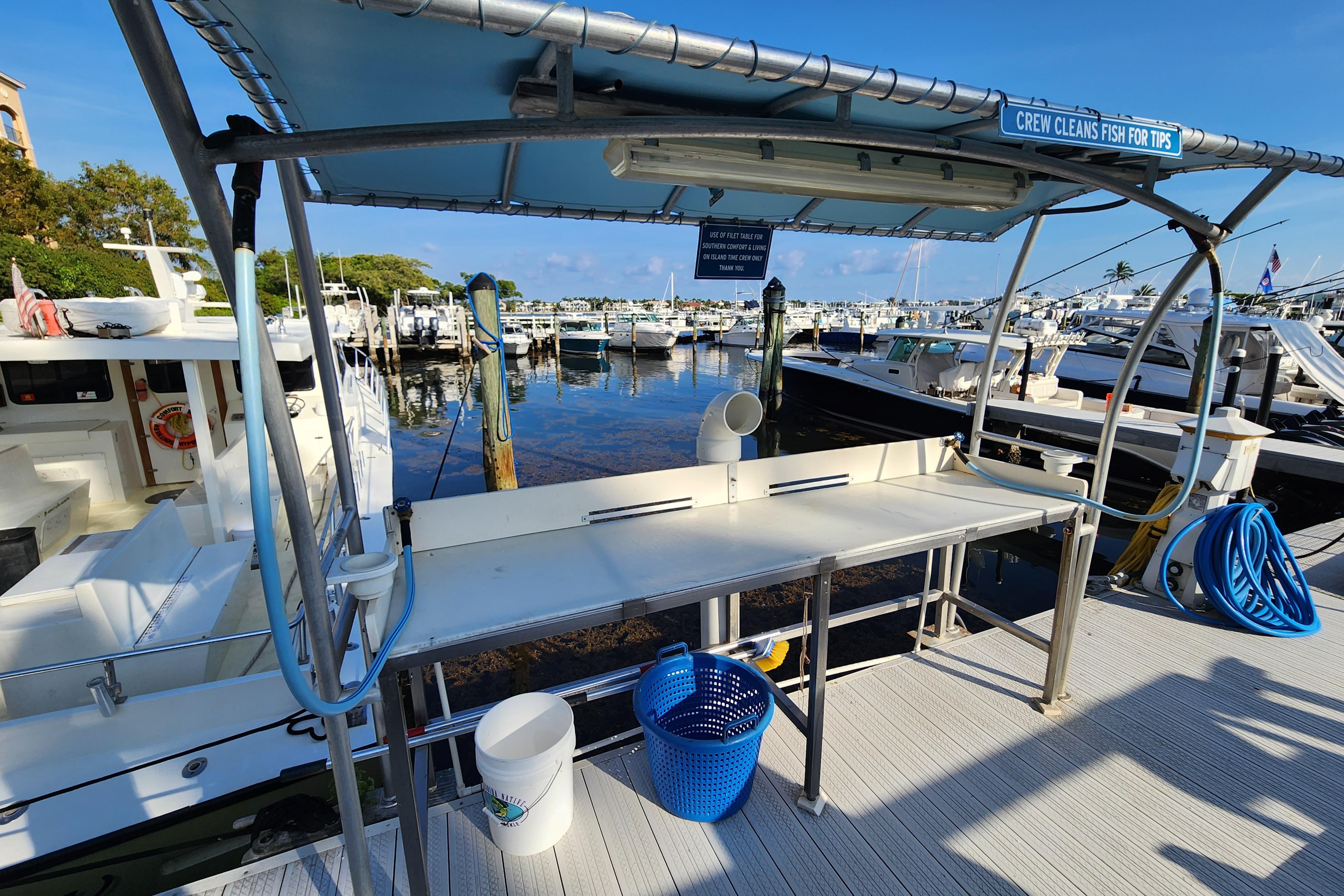 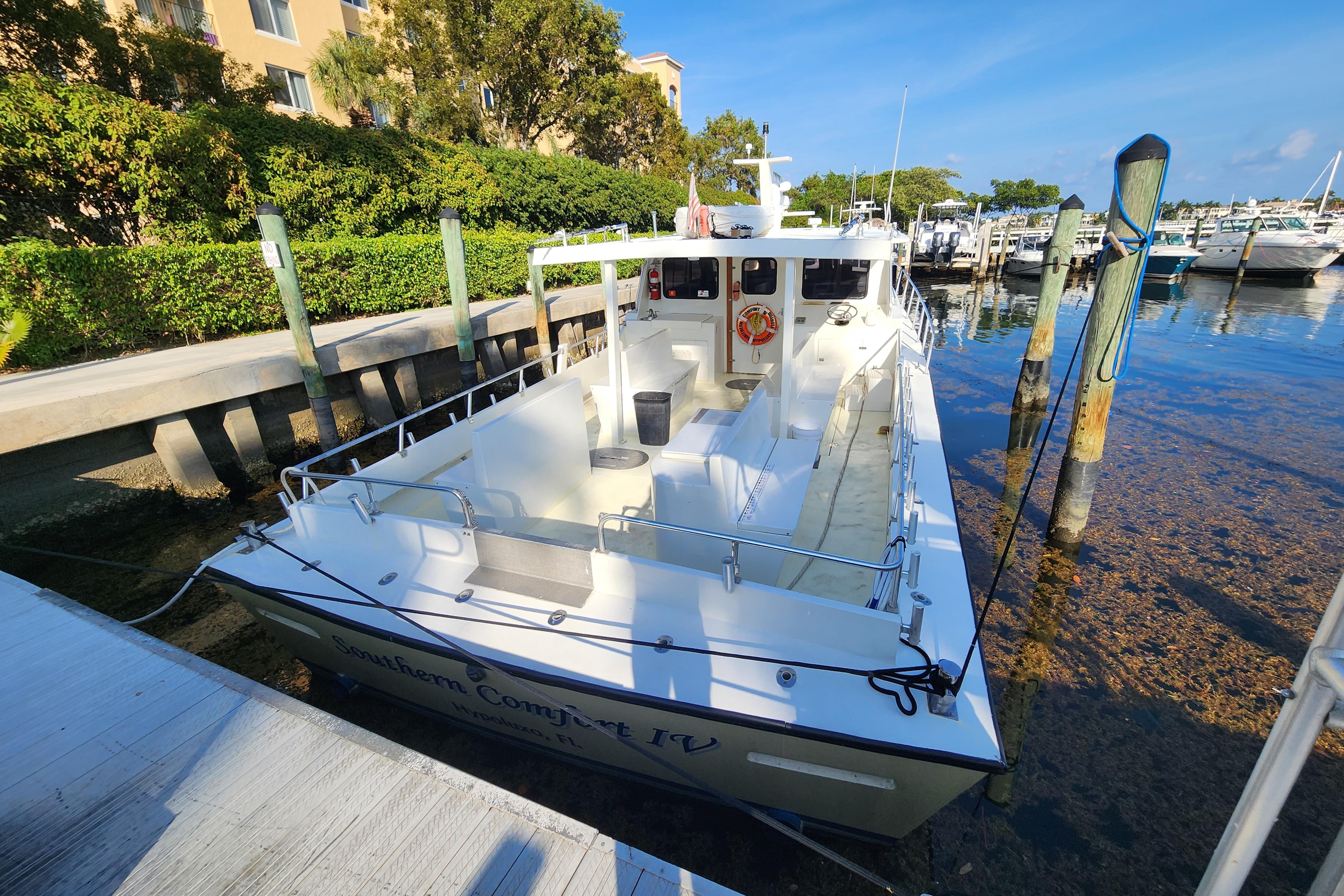 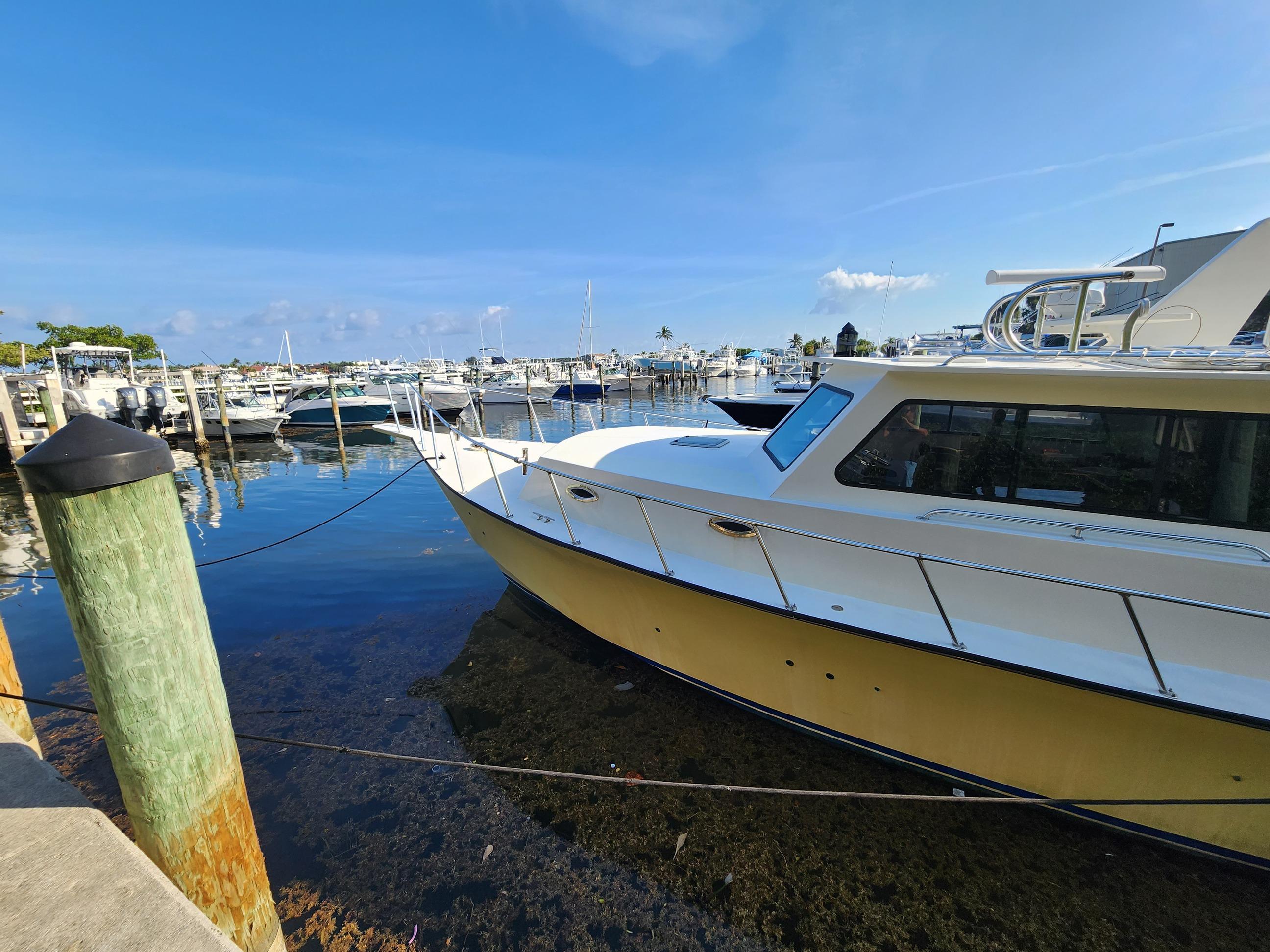 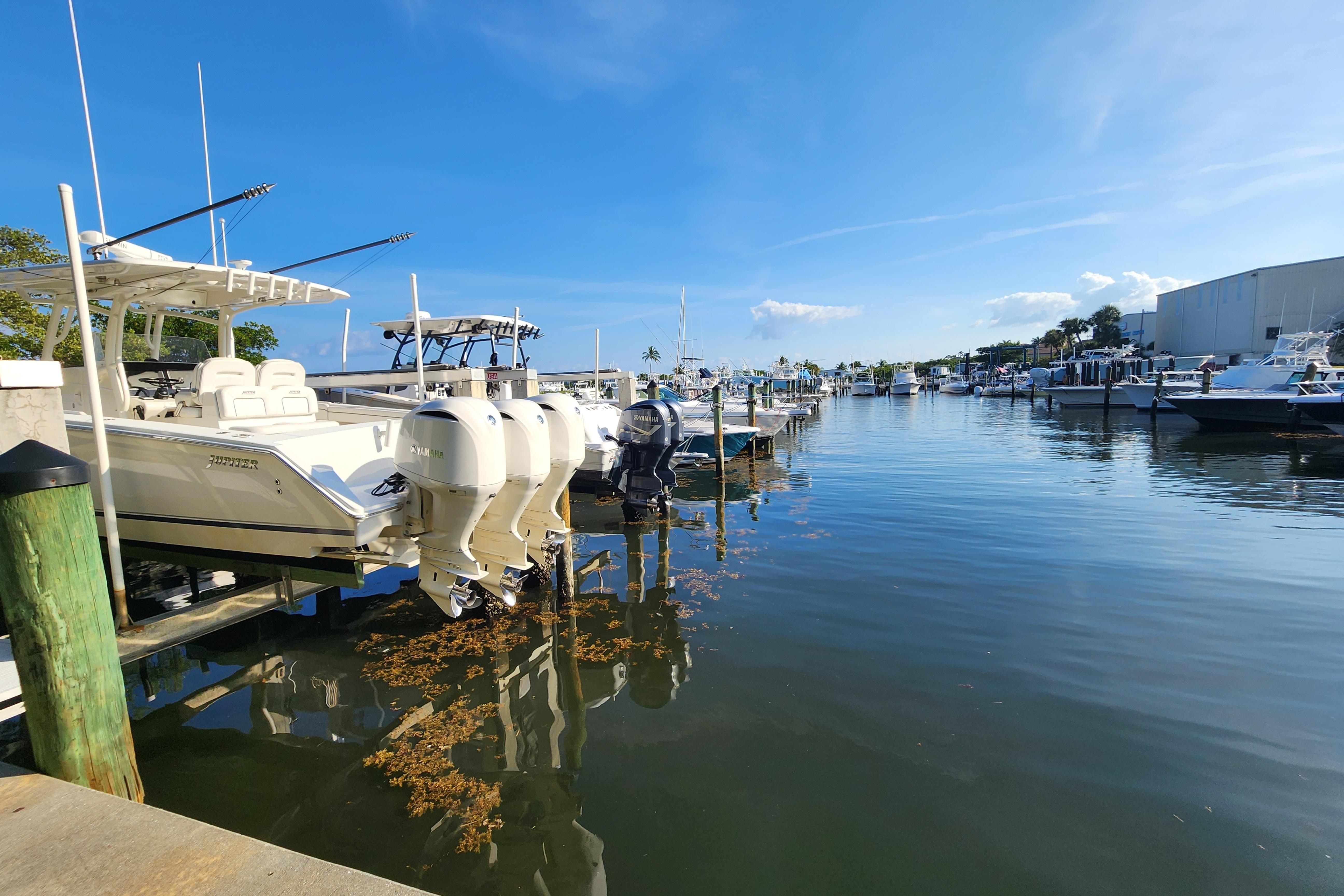 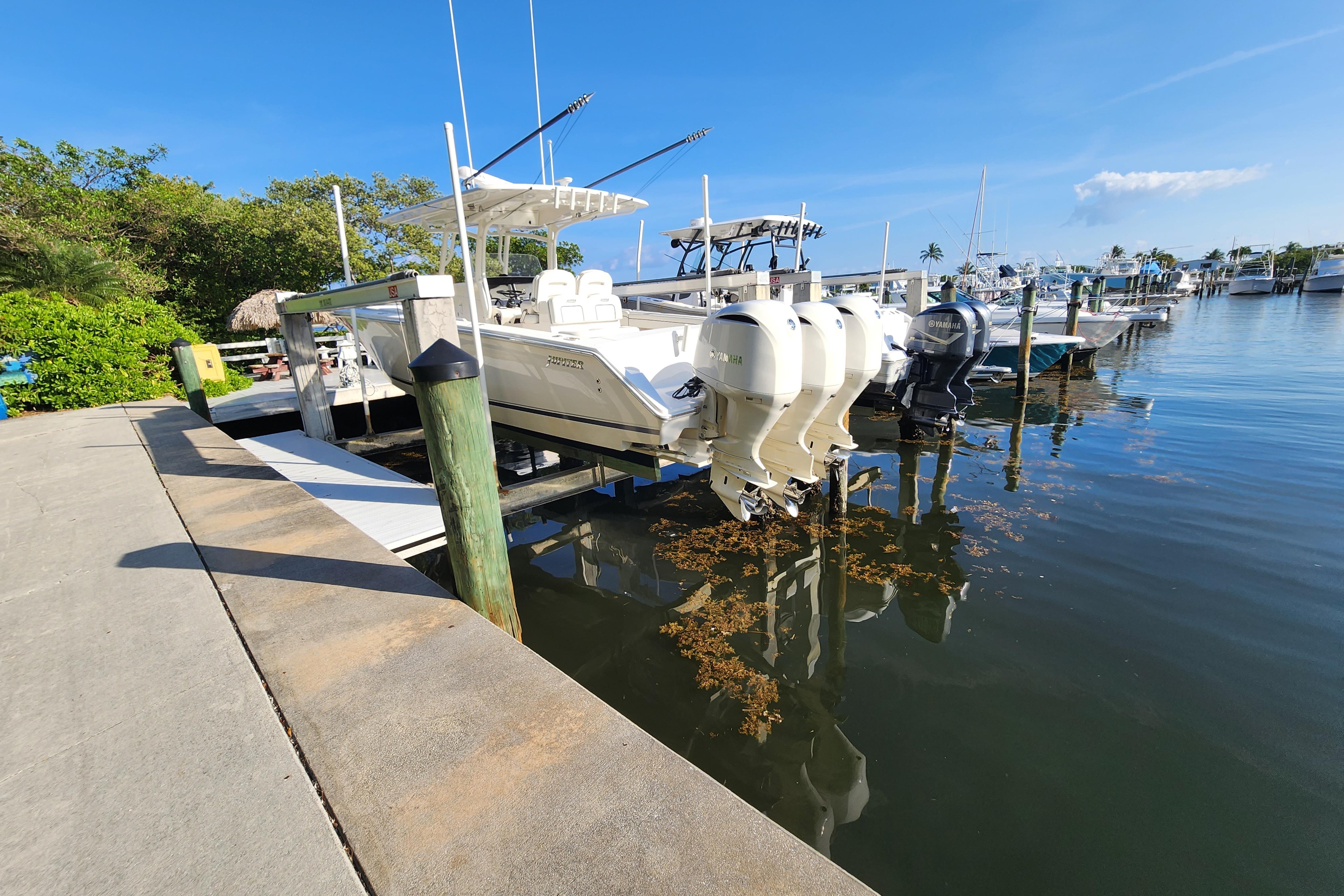 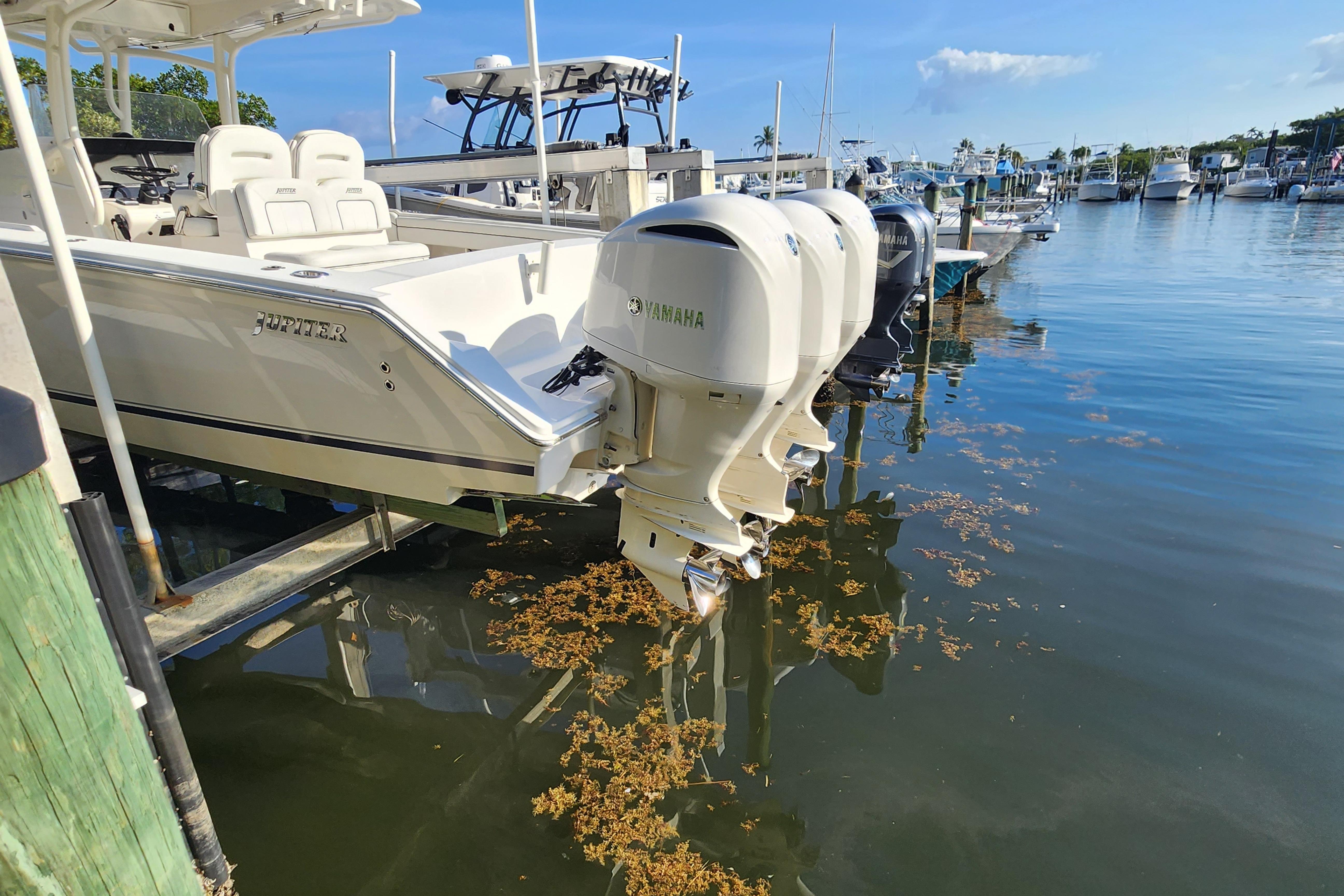 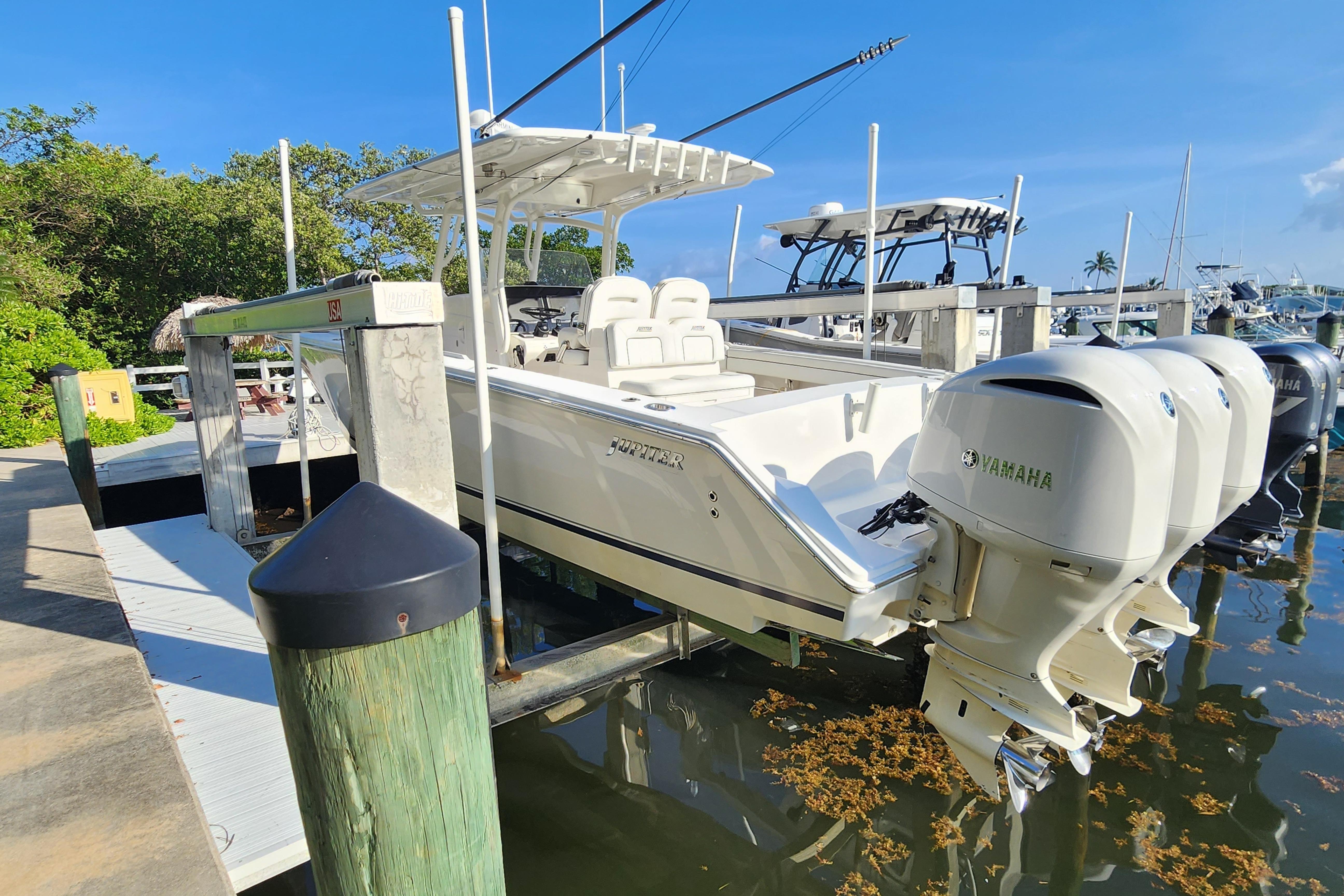 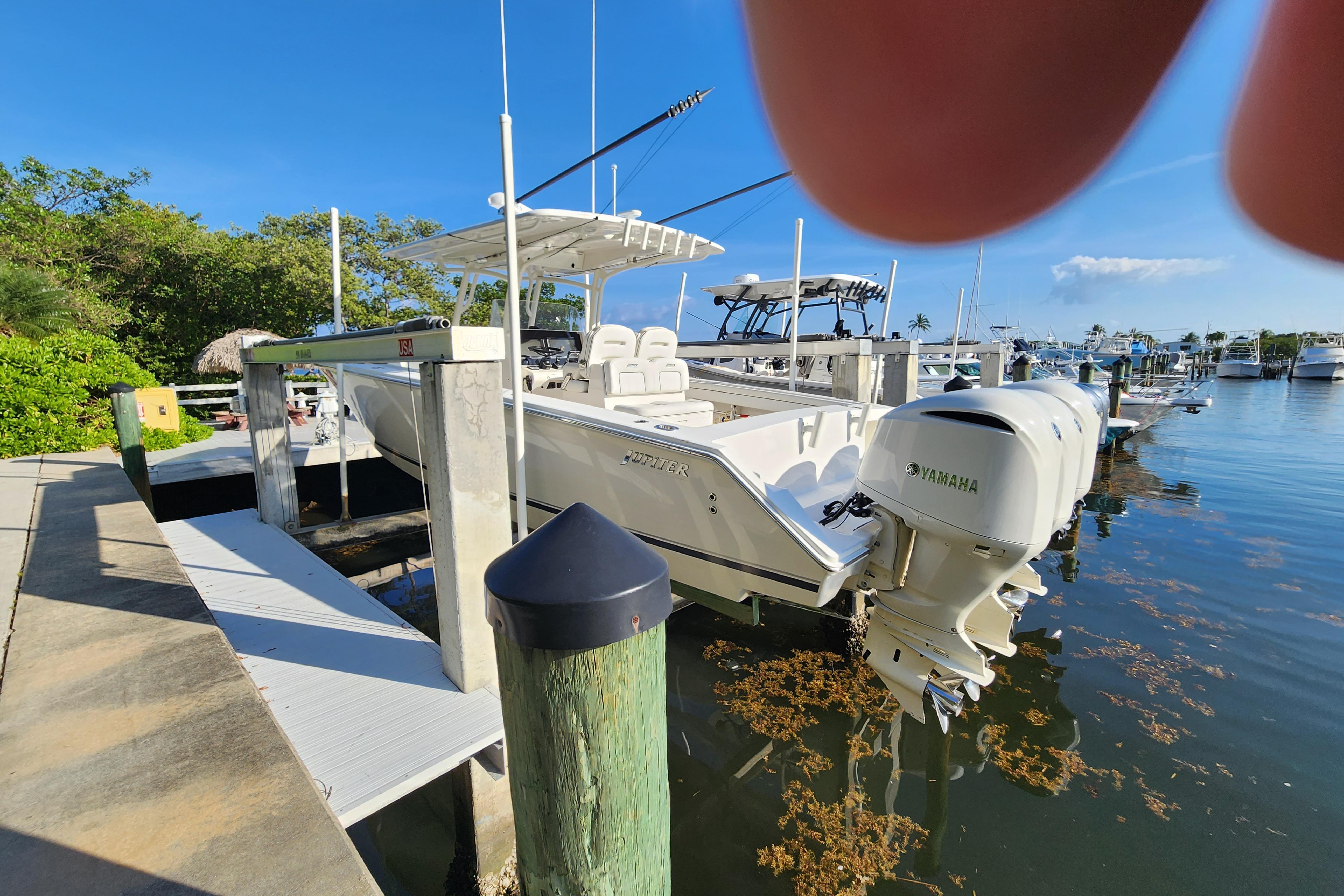 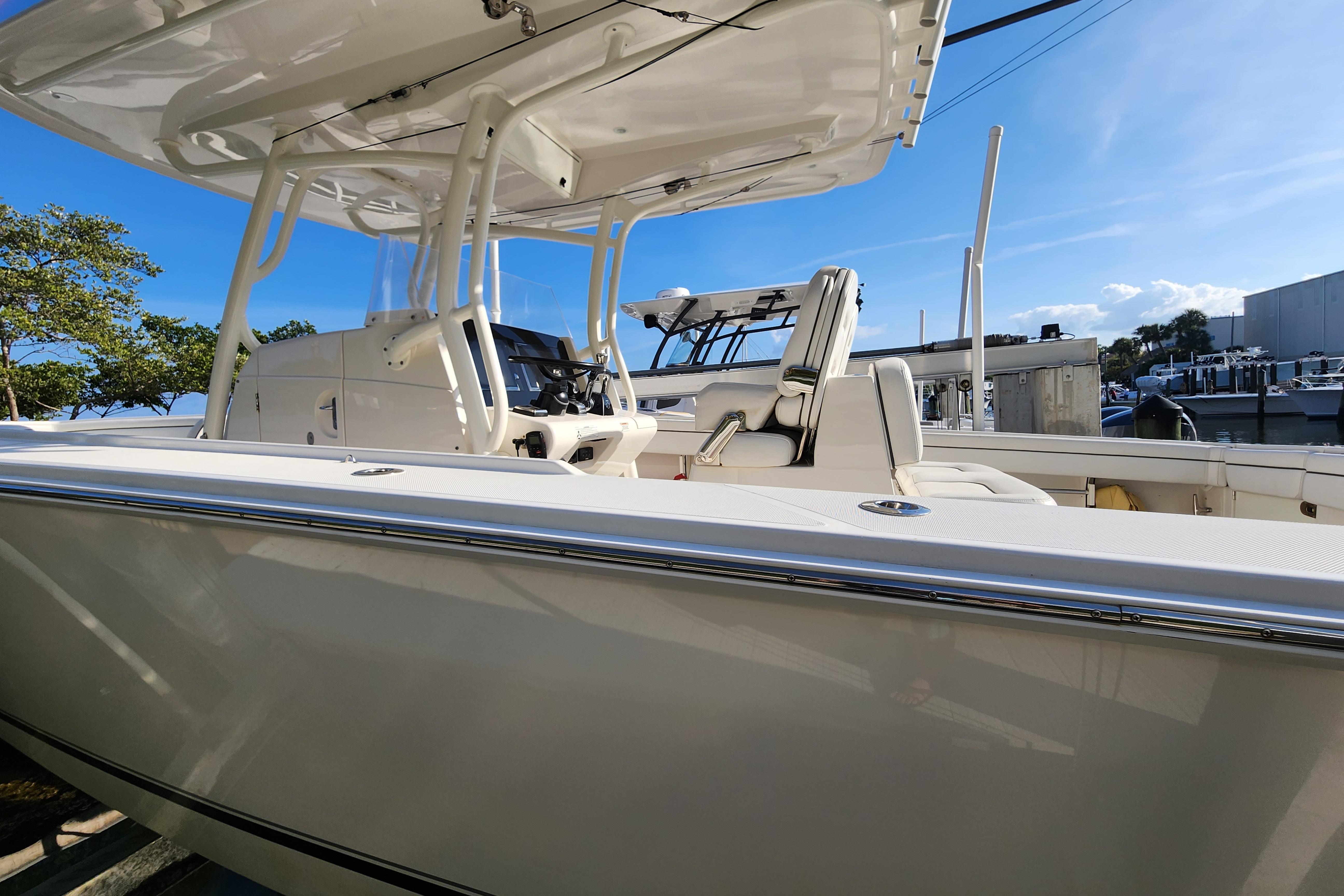 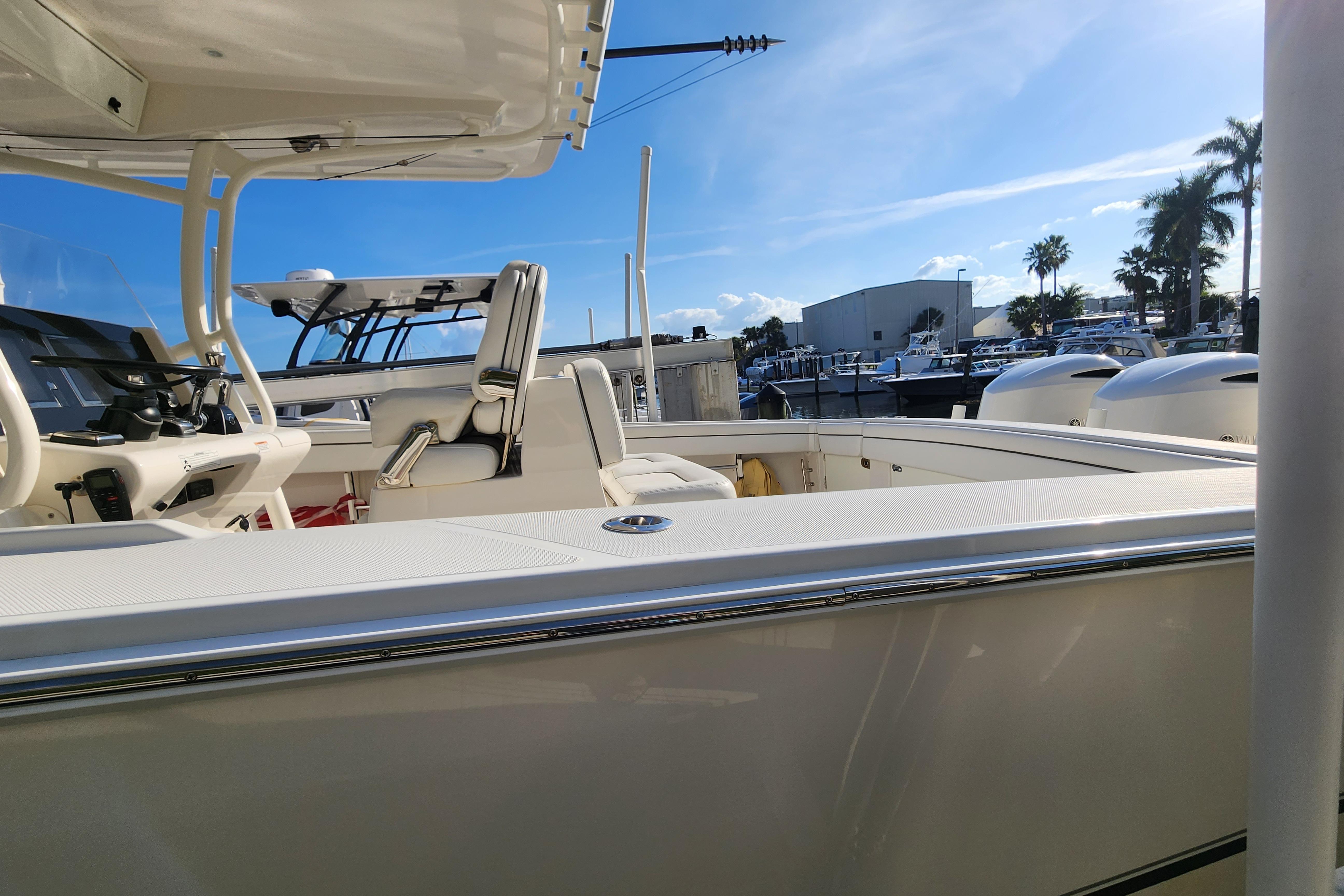 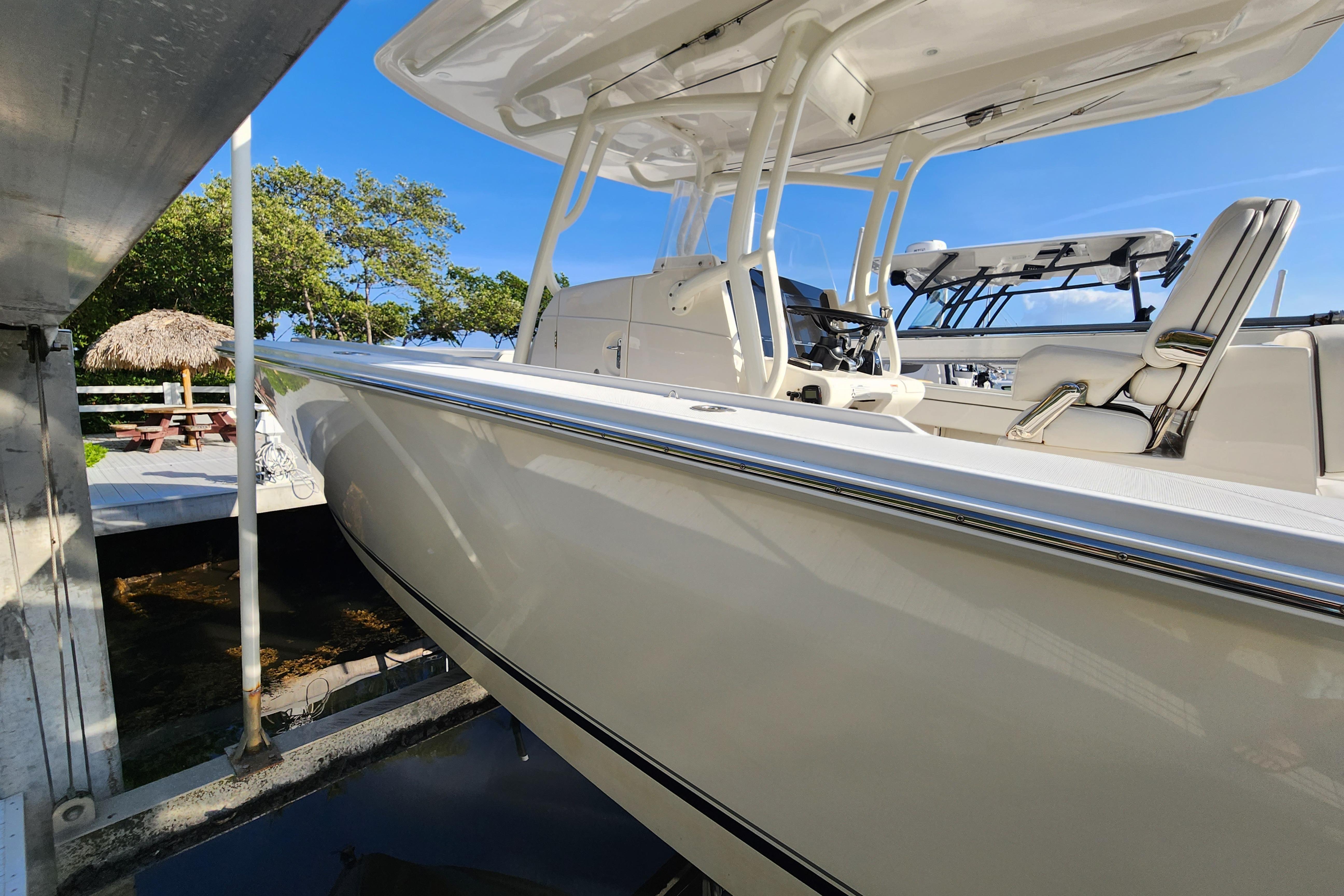 Buyers looking for larger boats can be deeply conflicted. For most of them, a dayboat is the most practical choice, but the desire to have a boat they can spend weekends on is really strong. Which dream do they have to give up? Formula’s new outboard-powered 330 CBR can accommodate both … in comfort and style

Formula introduced its 330 Crossover Bowrider (CBR) a couple of years ago, and I was impressed by its versatility. It featured a pair of 380 hp MerCruiser sterndrives that gave it sporty performance. Unfortunately for boaters who are partial to outboards, they weren’t an option then. But for model year 2018, Formula is offering the 330 CBR with either twin sterndrives or triple outboards. Our test boat featured the latter: three Mercury Verado 300s.

The outboard power trend is red hot these days, fueled by many coastal boaters who prefer them for a variety of reasons, including being able to trim them out of the water when they aren’t in use, to keep growth from accumulating, and the ability to quickly change one out if there’s an issue or an owner just wants to upgrade or update. The trend toward outboards is borne out by U.S. sales numbers. In 2012, 127,981 outboard-powered boats were sold. In 2016, that number had grown to 165,435. Many companies that converted their sterndrive boats to outboard power didn’t change anything except the power choice. But being performance oriented, Formula’s designers, headed by John Adams, knew that wouldn’t fly. Usually, the biggest casualty is the swim platform, where outboards tend to intrude where sterndrives don’t. Formula’s platform remains the same size, however, thanks to the Armstrong brackets used to mount the engines. The hull bottom was also tweaked to deliver the best performance possible, which showed up in our test numbers.

The Formula 330 CBR stretches to 34 feet, 7 inches, including the extended swim platform, and weighs around 12,500 pounds, which is a substantial load. It has 21 degrees of deadrise at the stern, so it’s plowing a pretty deep furrow when it’s on plane. But like dogs that don’t seem to understand their relative size when confronting another, the 330 CBR apparently thinks it’s a smaller boat, based on its performance numbers and handling characteristics. The weight differential between two 8.2L MerCruisers (2,244 pounds) and three Mercury Verado outboards (2,004 pounds) wasn’t huge, and it showed out of the hole. The outboard version got on plane in five seconds flat, with the sterndrive model just behind at 5.1 seconds and showing a bit more bowrise. And the top speeds were surprisingly close, despite the sterndrive version’s 760 hp vs. the outboard version’s 900 hp. The outboard was 2 mph faster, at 54 mph. Perhaps the drag of three lower units, compared to two, kept it close. But the largest differential was the 0-30 mph test: 6.8 seconds for the OB vs. 9.2 for the I/O. Credit the Verado’s supercharger, which delivers a sustained kick in the rear end during acceleration and translates to the 330 CBR’s amazing midrange sprightliness. Another assist goes to the Active Trim system on the outboard version, which automatically trims out the outboards for optimum performance.

Some boaters moving up from a sub-30-footer might be intimidated by the 330 CBR’s size, which includes a wide-track 10-foot, 3-inch beam, especially maneuvering around other boats at the marina. But the addition of Mercury’s Joystick Piloting for Outboards, which comes standard, means the average 10-year-old video gamer could dock it — could, not should. The joystick takes the confusion out of controlling three outboards and allows drivers to walk it directly sideways into a congested dock with precision. The Mercury Joystick Piloting for Outboards system takes the confusion out of controlling three outboards.

One issue we noted with the sterndrive version of the 330 CBR was its propensity to porpoise while it spooled up, requiring the driver to back off the throttle slightly and trim down before continuing the climb to top speed. That wasn’t an issue with the outboard version, perhaps attributable to its Active Trim system, which, when engaged, keeps the boat at the proper running attitude. It even trimmed down quickly and efficiently when I
cranked it into a hard turn.

The best attribute of the 330 CBR is its versatility. The giant bowrider has plenty of lounging and sitting space, and because it’s yacht certified, the number of guests is limited only by the number of life jackets aboard — and good judgment. Passengers in the bowriding section can hold their own party thanks to an abundance of seating that’s made more flexible by removable seat bottoms for feet-on-the-deck occupants and filler cushions for those wanting to stretch out. A huge bi-fold table makes a great place for formal dining or snacks.

Lots of larger boats have two-level cockpits, which can cause passengers to stumble, but the 330 CBR’s deck is all on one plane. For seating, the doublewide helm has twin reversible backrests that adjoin a small L-seating group that provides another dining venue with the addition of a removable table shaped like a slice of pie. The cockpit table can be repositioned to port to service the larger L-seating group. Just in front of this group is a compact entertainment center for food and drink prep that can be optioned with a pullout drawer refrigerator ($2,395). On the hook, a giant stern sunpad with a reversible backrest accommodates loungers. Most bowriders have dual consoles with a centerline walkthrough, but this boat has one large console — access to the bow is to port — that contains a surprising feature: a cabin for two with an adjoining standup head compartment that includes a shower and a VacuFlush commode. This is no cubby hole for kid timeouts; rather, it’s a weekend-worthy refuge that can be air conditioned ($6,300) out on the water with the addition of
a 5 kw low-CO emissions Westerbeke generator ($18,130). There’s even a galley with a Corian countertop and a microwave oven. To prepare more elaborate meals, a transom-mounted infrared gas grill is a $1,600 option.

No one is likely to see two identical 330 CBR boats on the water. Credit for that goes to the recently developed Formula Flex program, which gives buyers the ability to mix and match among the standard 30 color possibilities in the Formula Axalta Paint Library. If that isn’t enough, the MyWay option program gives buyers access to a staggering 1,341 colors in the Pantone Matching System and thousands of available colors from automakers worldwide. Not counting the eight choices of Ultraleather upholstery, eight choices of drapes and pillows, and four choices of flooring — all standard — there is a wide range of options for customization. Our test boat had the hardtop option ($31,690), which really changed the feel of the boat thanks to a retractable fabric sunroof and four lighted speakers. It also had the SureShade option ($10,625), which protects cockpit dwellers from the sun with the push of a button. If weekending is on the agenda, the cabin can be equipped with a TV, a Blu-ray disc player, Wi-Fi, an antenna and cable connection, for $3,355.

The stylish helm — it has a handstitched dash — comes equipped with a Raymarine eS78 widescreen chartplotter that can be upgraded to an Axiom Pro 9 S chartplotter with sonar, for $2,195. One no-brainer option is the JL Audio stereo system with a subwoofer and lighted speakers, for $1,570. In retrospect, we wish we had gotten the generator and air conditioning.

My wife and I have been into racing motorcycles and cars, but this is our first boat. We bought a condo on Lake of the Ozarks, so we needed a boat. We researched for about a year and narrowed it down to three brands, but in the end it was the quality of Formula that really stood out. We have two grown kids, eight grandkids and three great-grandkids, so we wanted a boat that was comfortable and roomy enough for everyone. The 330 CBR is a beautiful boat that always draws attention, and its fit and finish are fantastic. We use it as a dayboat, but having the cabin for the little ones when they get tired is a real bonus. Lake of the Ozarks is an amazing place and in addition to attending events such as The Shootout, we love to “cove out,” as they call it here, and drop anchor in one of the many coves and swim with the kids while listening to the stereo. We even visited the factory and were greeted by the company president. They sent us daily photos of our custom boat as it progressed down the line.

One thought on “Crossing Over — Formula 330 CBR”