Four Winns’ newest foray features something we haven’t seen in a while. 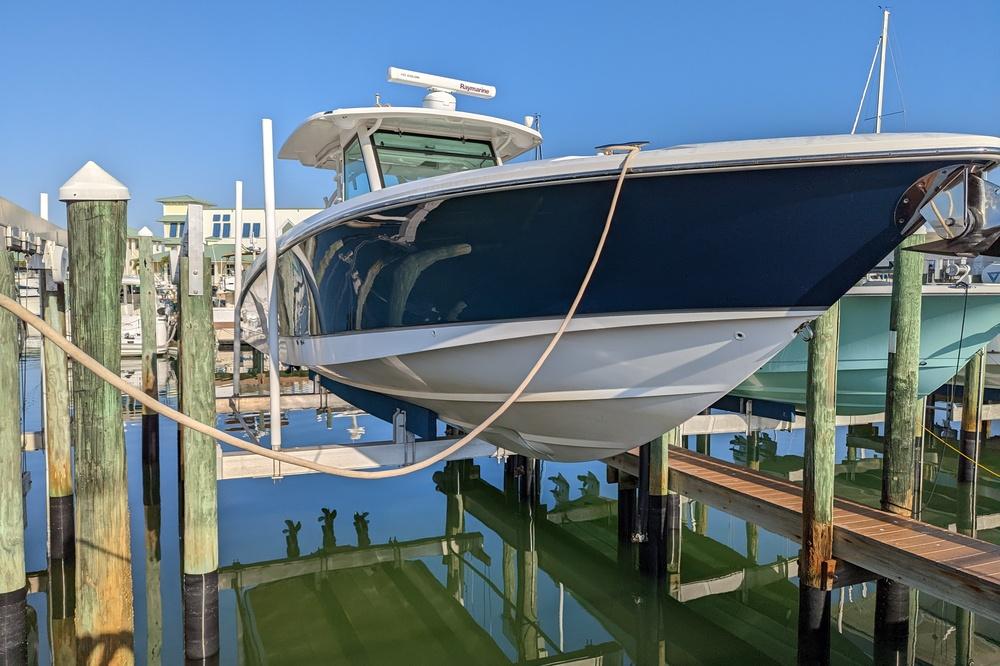 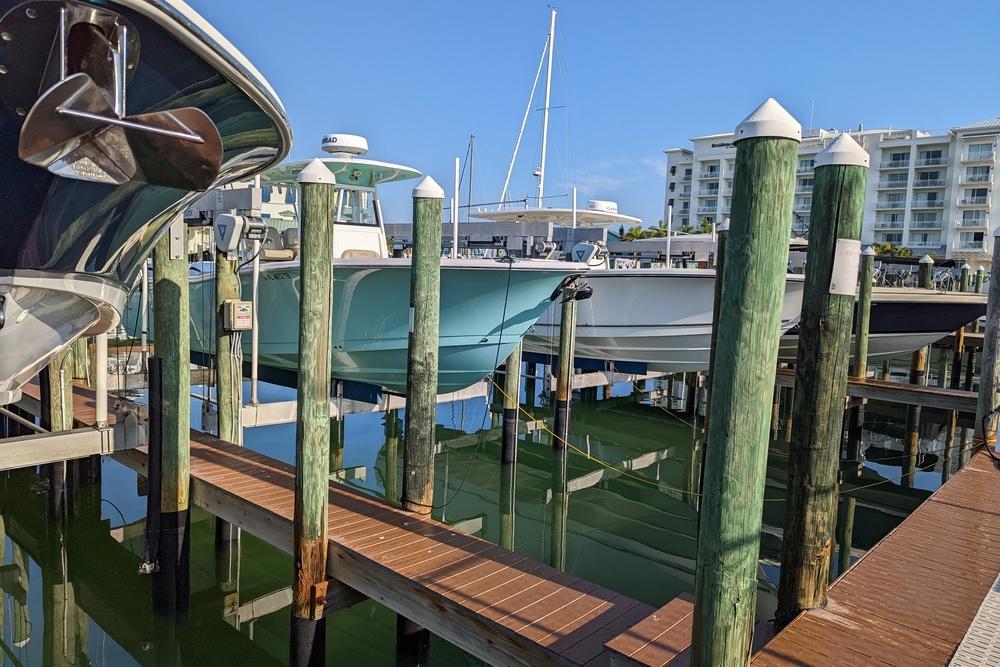 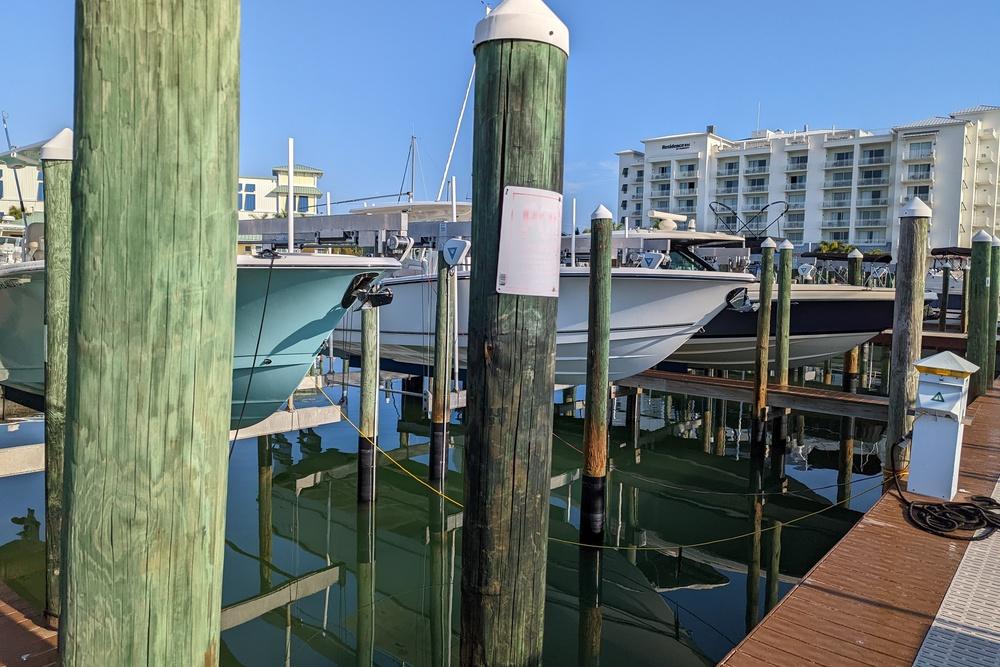 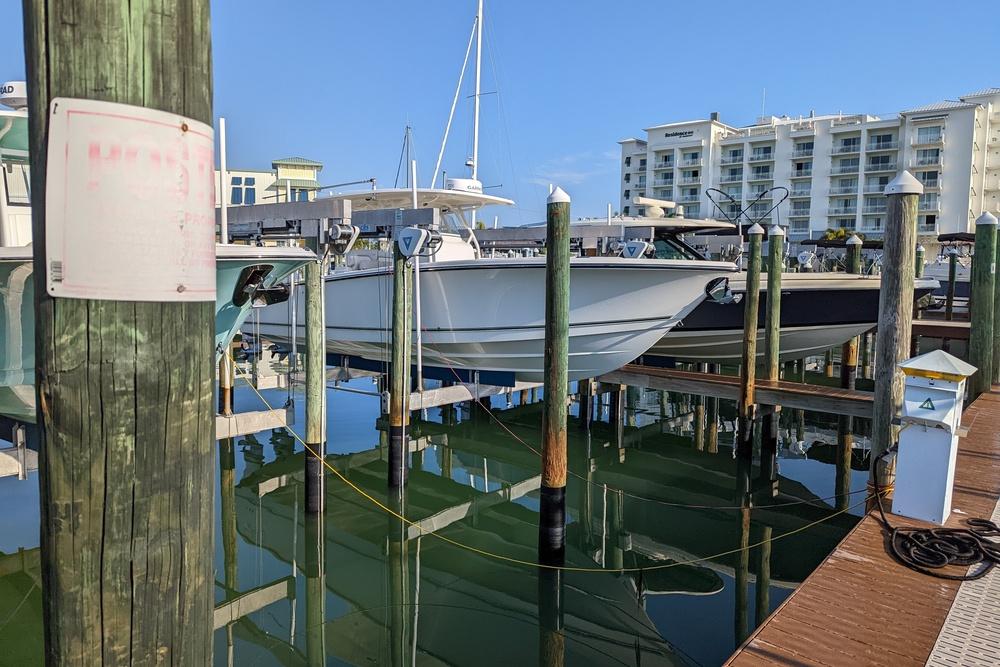 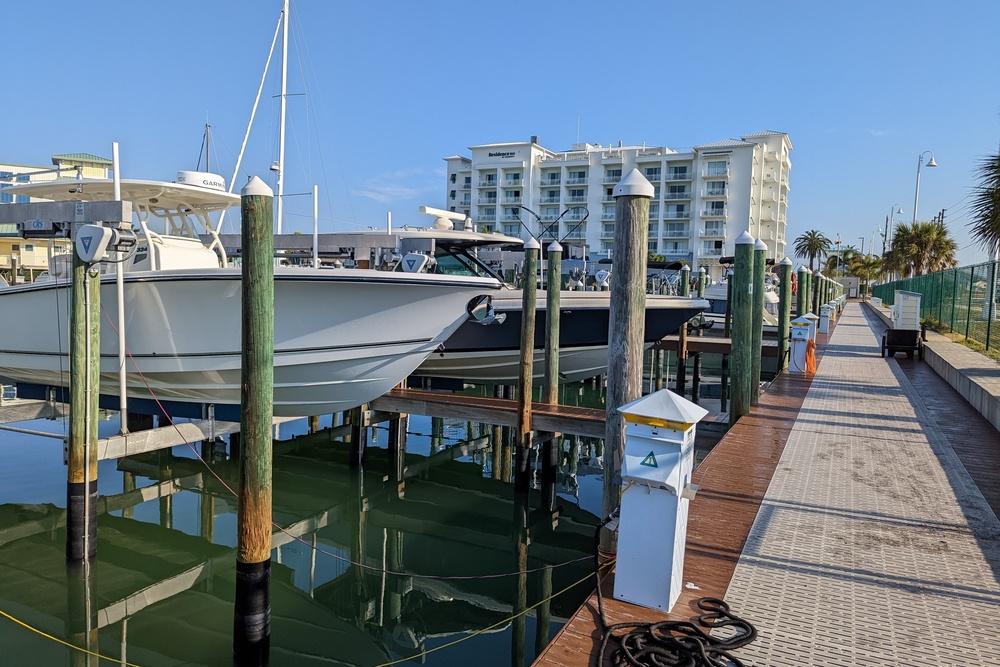 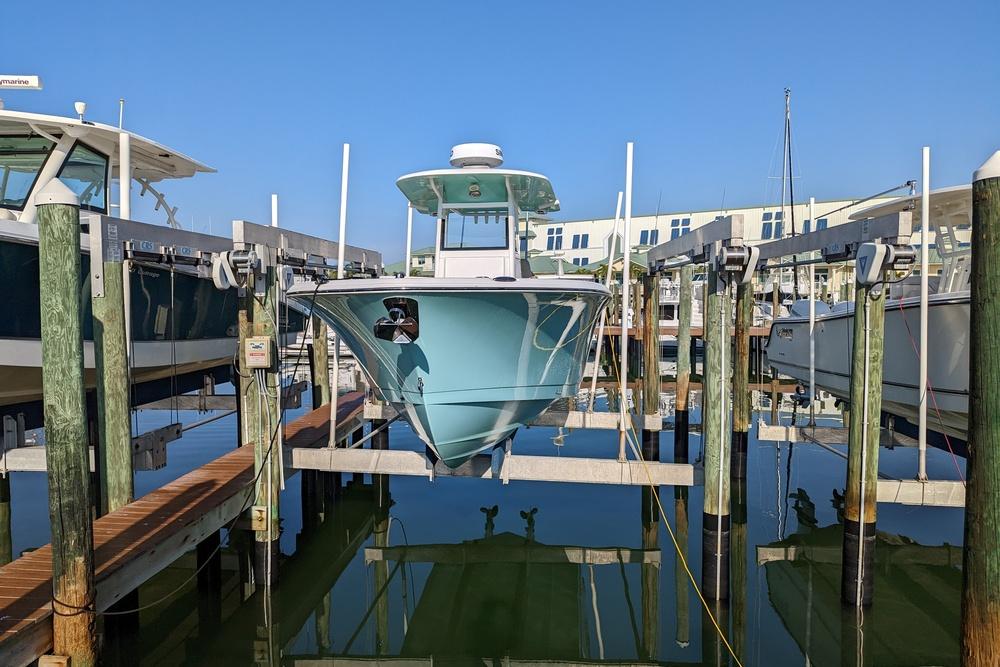 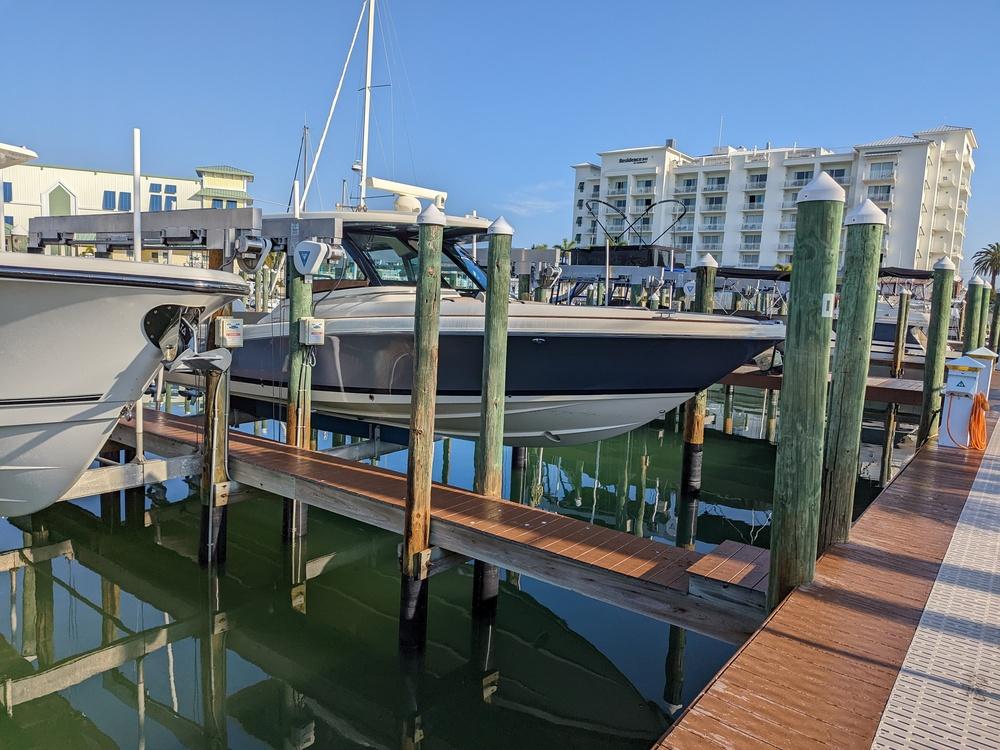 For many years, Four Winns has been synonymous with sterndrive power. Sure, there are a couple of inboard-powered cruisers, and since 2012 there’s been a solitary outboard model, the HO 180. The last Four Winns longer than 20 feet with outboard power came out in 2001, the 214 Funship. But this year, Four Winns unveiled a new line of outboard-powered boats, anchored by the HD240, a hybrid deckboat/bowrider that is turning heads and sounding a lot different.

We’ve all seen deckboats that are about as sexy as the shoebox-like Nissan Cube, but Four Winns makes sure the HD240 has swagger, especially when it’s clad in the builder’s Signature Series trim level, as on our test boat. Probably the most striking feature of the SS package is the carbon fiber-looking Aquaflex upholstery, which gives it a luxe appearance. While the black panels feature a cloth-like texture that stays much cooler than standard shiny vinyl, Four Winns’ designers wisely chose to use the panels in places where humans probably won’t touch them or as vertical panels, which escape the full brunt of solar radiation. The Signature Series red, black and white design elements carry over to the hull to create a striking look.

The HD240 doesn’t share its hull design with a sterndrive counterpart, like the flagship HD270 OB does, but a huge stern storage area can easily be flipped up to access where a sterndrive engine could have been located, which suggests we will be seeing such an iteration. It’s basically a giant bin that holds a bucket for cleanups or trash and an Igloo marine cooler to feed its smaller, under-seat counterpart when it runs low. But there’s still plenty of room for bulky items or 11 life jackets. In addition, a massive centerline, in-deck compartment can hold the entire fleet of watersports apparatus.

This is the first Four Winns to feature an outboard as large as the Mercury Verado 250, a 2.6L V-6 that is one of the most versatile blocks in all of boating and can support an astounding range of horsepower from 225 all the way to 400. The HD240 can be equipped with as little as 200 hp (don’t do it!), but the 250 is the least amount of power that will deliver good performance. It pushed our 4,600-pound test rig on plane in 3.8 seconds. The HD240 features Four Winns’ Stable-VEE SC hull (the SC stands for split chines), which has a stepped running surface to reduce friction, thereby improving performance. It allowed the HD240 to reach 30 mph in 8.2 seconds. While some stepped hulls need to go fast to stay on plane, the HD240 stayed on top at just 19 mph, which is useful when things get rough or for towing youngsters on a tube. Top speed with the 250 Verado surpassed the magic 50 mph barrier by one-tenth of a mph with two large passengers and half of the 54-gallon fuel tank occupied. Max horsepower for this model is 300, and the 300 Verado comes with no weight penalty, though it raises the price by $3,538. Four Winns will rig the HD240 with Yamaha or Evinrude power.

One of the attributes of the Stable-VEE hull that can be felt before applying power is its lateral stability. Even beam-to the waves, it has a very earth-like feel for a boat of this length. In really hard turns, the HD240 tracked well without heeling over excessively, despite having a wave-cleaving 20 degrees of deadrise. The HD240 tends to ride very level in the water; even with the outboard trimmed out, the bow doesn’t rise very much. While running at wide open throttle, there’s no drama. At all speeds, it feels like a lot of the hull is still in contact with the water, which makes me think that the boat can easily handle 300 hp. Almost any boat can be fun during cruising, but how does it perform with the key turned off? A good gauge of a boat’s human friendliness is what I call the “dock” test. If a boat were tied to the dock, would it still be fun to hang out on? The HD240’s sedentary prowess is exemplified by the living room-worthy sofa at the stern, which is wide enough for two adults to commingle with a kid jammed in the middle. On sterndrive models, this would be the location of the sunpad, but thanks to the beam being carried forward like on a deckboat, there’s plenty of room to stretch out and tan, especially with the optional bow filler cushion ($377) in place.

Watersports are definitely in the picture, and the HD240 can be rigged to maximize its potential. Adding the wakeboard tower, complete with Bimini top, costs $6,769 but also adds a dash of cool. A less expensive option is the TurboSwing ($1,223), which is a stainless steel hoop that encircles the outboard and keeps the line from chafing it.

The boat’s entertainment quotient can be upped with the addition of a table ($585) that can be mounted in the cockpit, bow or stern platform. The four-speaker stereo is adequate for listening to talk radio or the big game, but for partying it up, get the Premium Sound System ($2,192), which includes a Bluetooth JL Audio system with a subwoofer.

The Signature Series HD240 is a premium boat that comes at a fairly steep base price ($88,077 with the 250 Verado), but it also includes items that aren’t normally gratis, such as a custom, color-matched twin-axle trailer and a Porta Potti for the huge head compartment, which includes a sink with a spigot and a countertop. To make the boat more cruiser-like, option up to an electric toilet for $1,962. Carpeting is standard, but most people these days are going with alternate flooring, such as the Cabana Mat ($792) vinyl surface our test boat had. Two of the strong design elements are the large padded fore and aft swim platforms. The stern pad is notable for its full width that allows easy egress from side to side. Up front is a four-step boarding ladder for hitting the beach, but be sure to get the optional shower ($231) for quick rinse-offs during reboarding. Even better, this option also includes a shower at the stern for après-ski hosing down. The last must-have option is the flush-mounted Raymarine array consisting of A75 and A77 displays. Purchased by Mike and Alison Franks, plus Stella, 5, and Evelyn, 3, Chesterfield Township, Mich.

We wish there were a lockable glove compartment for stowing phones and valuables. Although the 250 Verado performs well, an extra 50 hp would have been nice.

I used to own a boat with my father when I was in my 20s but haven’t had a boat for 20 years. We live on a canal leading to Lake St. Clair, so it made a lot of sense to get a boat that allowed us to be able to get out and enjoy this fabulous resource. While I wanted a fishing boat, my wife wanted something a little more family friendly; with two young girls, a head compartment was a must. We also wanted something large enough to handle the big cruiser wakes on our lake. We looked at the top brands, but the Four Winns seemed to be in a higher class than the others and we get lots of compliments from people who see it. When the girls get older I am sure we’ll get into watersports but right now we just enjoy cruising and hanging out. I rigged the cockpit table station to accommodate rod holders and have caught some nice muskie. We bought the boat at the Detroit Boat Show and Chris, our salesman, was great about answering all our questions.