The Four Winns Horizon 200 should be in the Guinness Book of Records as the largest 20-foot bowrider in the world. 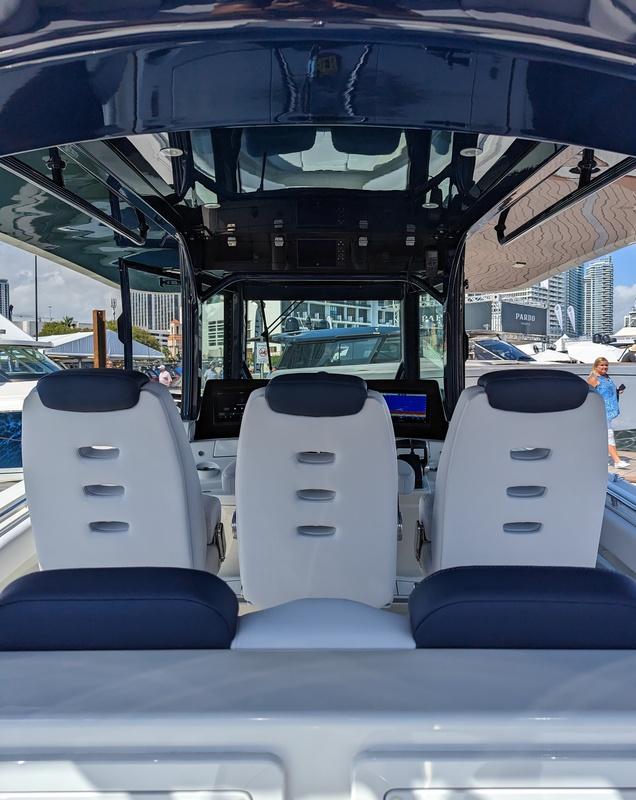 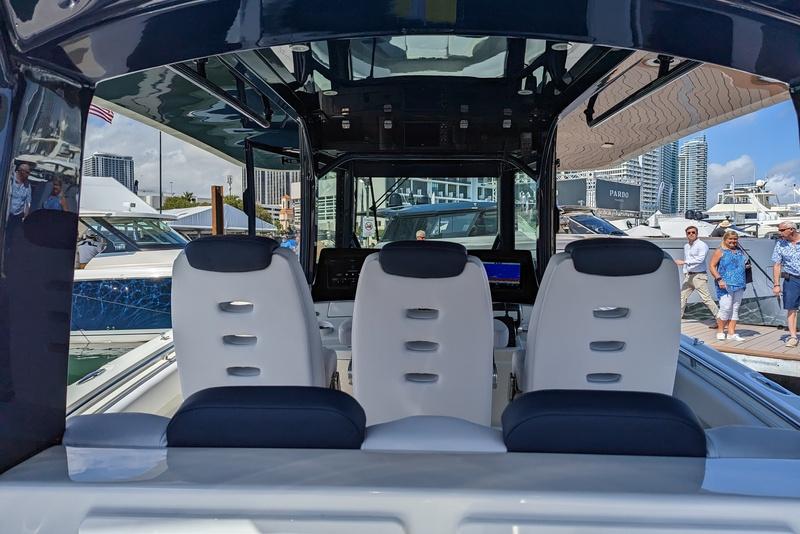 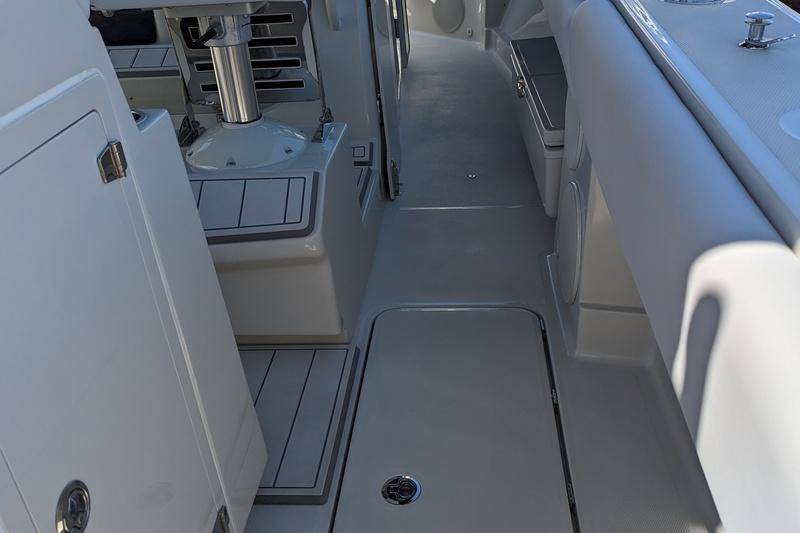 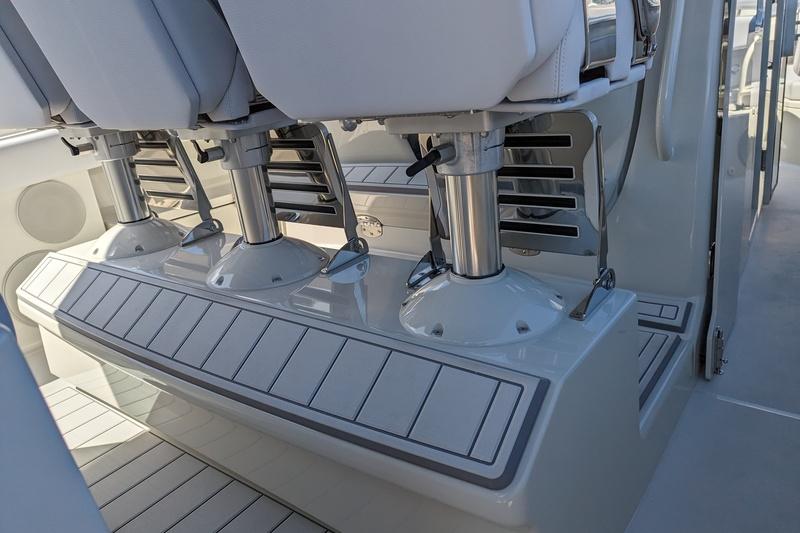 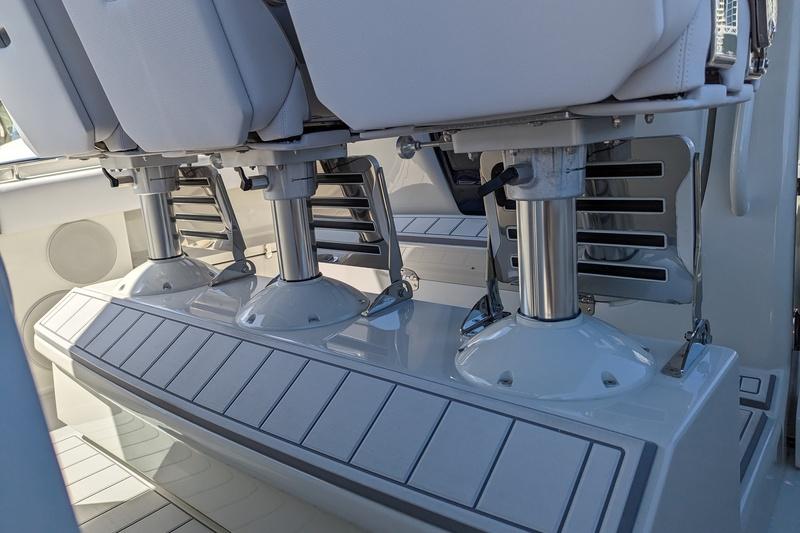 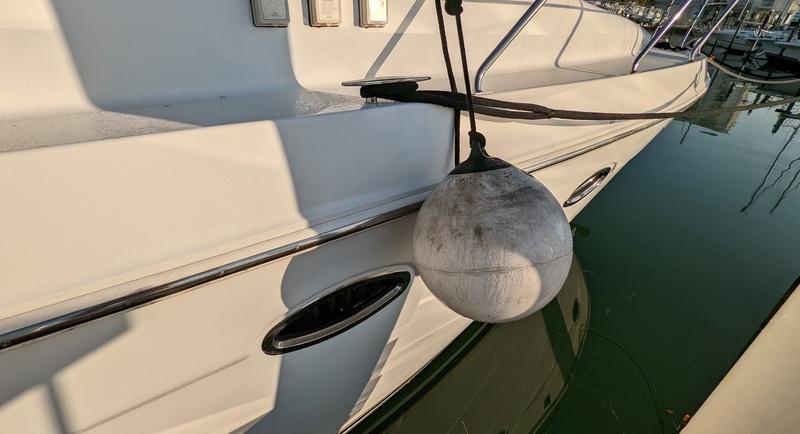 The designers at Four Winns missed their calling. Instead of building boats, they should be designing apartments in New York City, because they are the masters of maximizing space, as evidenced by the Horizon 200 — a new 20-footer that will make you think you’re shrinking.

The stern bench on this boat epitomizes a “less is more” philosophy. Although the H200 is of proportional width at 8-foot, 3-inches, vertical notches in the backrest toward the corners move people sitting next to the thinner-than-normal gunwale to the extreme outside, which creates enough space for four full-sized adults to sit side-by-side in comfort — with enough room left over for a couple of small kids to be jammed into the cracks between them. Four Winns also managed to pull off another rare feat: It used black upholstery that doesn’t become a skin-searing solar collector. The ultra-premium Silvertex vinyl, which has a fabric-like look and feel, deflects enough direct sunlight to remain relatively cool. It’s warmer than the adjacent Aquaflex white vinyl but definitely doable in high summer. Under the starboard seat bottom is a cooler for holding refreshments, and there are storage compartments under all the remaining bench seat bottoms. One build feature that helps identify Four Winns as a premium boat brand is its gelcoat-finished storage compartments.The full-width sunpad behind the bench has a couple of stainless steel cupholders to avoid “teetering drink syndrome,” and though the pad is made up of several sections fitted together, the surface remains flat for comfortable sunbathing. The biggest gotcha moment aboard the H200 is the stern jumpseats, which are formed by flipping up the outboard segments of the sunpad, but the newly formed backrests are really high, towering over the seated person’s head, which adds to the “I’m shrinking” feeling.

Since 1993, Four Winns has been using the Stable-Vee hull; don’t look for that to change, because it works so well. Our test H200 is powered by the MerCruiser small-block 5.0L V-8 sterndrive, which proved to be the sweet spot between the 220 hp V-6 and the pricier 5.7L 300 hp V-8. One of the traits of the Stable-Vee hull is its quick time to plane, thanks to the after pods — fiberglass hull extensions on either side of the outdrive — which act like trim tabs to quickly bring the bow down and helped give our test boat a time to plane of 3.4 seconds with little bowrise. Time to 30 mph was a rapid 6.9 seconds, and 35 mph proved to be the H200’s most comfortable cruising speed as it achieved synchronicity with engine rpm of 3500. Top speed was a respectable 50.4 mph.

Another characteristic of the Stable-Vee hull — as its name would imply — is its excellent side-to-side stability, thanks to a unique chine design that gives it a wide footprint. Although the H200 has a healthy 20 degrees of deadrise, which usually makes a boat heel far over during hard turns, it remains relatively level, so nervous passengers should feel safer. But boy can you crank this boat into corners without slipping. We tested the Four Winns on Lake Wawasee in moderate conditions and found it to be a 20-footer that handles choppy conditions in comfort. It’s equipped with ComfortRide bucket seats that are well padded and have flip-up bolsters. There’s good lateral support from the side bolsters, but they are designed to accommodate a wide range of body types and restrain you without constraining you.

The Horizon 200 is your quintessential fun-in-the-sun bowrider that is small enough to be an easy tow for normal-sized vehicles such as crossovers or light-duty trucks. It’s a competent ski boat that comes complete with a centerline locker (with a finished interior, of course). The bucket seats swivel 180 degrees, which gives the port-side rider the best ski spotting seat in the house, thanks to a stern bench extension that provides a place to stretch out. There’s a wakeboard tower option for would-be high fliers that comes with a color-matched Bimini top. The tower is hinged for garage storage or limboing under low bridges. The H200 throws a versatile wake — very flat at 30 mph for slaloming and a small but well-formed ramp at 20 mph for wakeboarding. Usually the bowrider seats in a 20-footer are the domain of the Munchkin Guild, because adults can’t fit comfortably. Normally I dislike any bowrider backrest with anything other than a flat surface, but the vertical-V indent concept, borrowed from the stern bench, is not only comfortable but performs the same function of positioning the rider to the far outside, which creates extra legroom as your feet angle toward the centerline. Extra space is also gleaned from the relatively small consoles, which naturally eliminates the possibility of a head compartment. Another design element that opens up the bow even more is the outward-flared gunwales and a minimum of side bolstering. The downside is there’s no rearward-facing seat at the bow, which is usually a prime ski spotting station. The one element our test boat could use is the extended swim platform option, which will be the best $1,600 you’ll ever spend. The integrated standard platform is a bit stubby by itself, but with the extension, it becomes the step down to an expansive deck that sits very low to the water. Couple the extension with the Four Winns four-step boarding ladder, which has oversized steps and is angled outward, and boarding couldn’t be easier. Upping the attitude is easy with a reasonably priced premium sound system ($708) that gives you two transom speakers and a remote along with a subwoofer, which is a rare option for a 20-footer. The color-coordinated trailer is standard, but getting a Bimini, pull-up cleats, carpeting, upscale bucket seats and a bow scuff plate requires the LX package. If you are really looking to take the attitude up a notch, Four Winns offers the Horizon 200 in an even sportier RS version or the more luxurious Signature Series model.

There were no speakers in the bow, so we installed two Wet Sounds LED-lighted speakers, replaced the other four speakers with the same and added a subwoofer along with an Alpine stereo head.

We had a bass boat when I was growing up, but I had never owned my own boat. That changed when the suburb I live in, Towne Lake, built a 300-acre lake. It’s a fairly small lake, so you are restricted to boats less than 22 feet long and V-6 engines of 230 hp max — and the H200 with the 4.3L engine meets those requirements. For us it was the clear choice, because it felt much larger inside than the rest, and we loved its looks. We like to just cruise around, occasionally stopping to sit on the stern seats and jump in the water to cool off. The boys love to go tubing and kneeboarding. My oldest son has his boating license and drives the boat, which is really easy to maneuver. This year we plan on taking it to Lake Conroe, which is a much larger lake that can get really rough, but the H200 handles the chop really well. Texas Sports Boats has been fantastic. I had a fifth-wheel trailer that I need to sell before I could buy the boat, and they called around for me and helped me sell it. They call me all the time to see how we’re doing.