Hurricane's newest compact deckboat has been redesigned from the ground up. 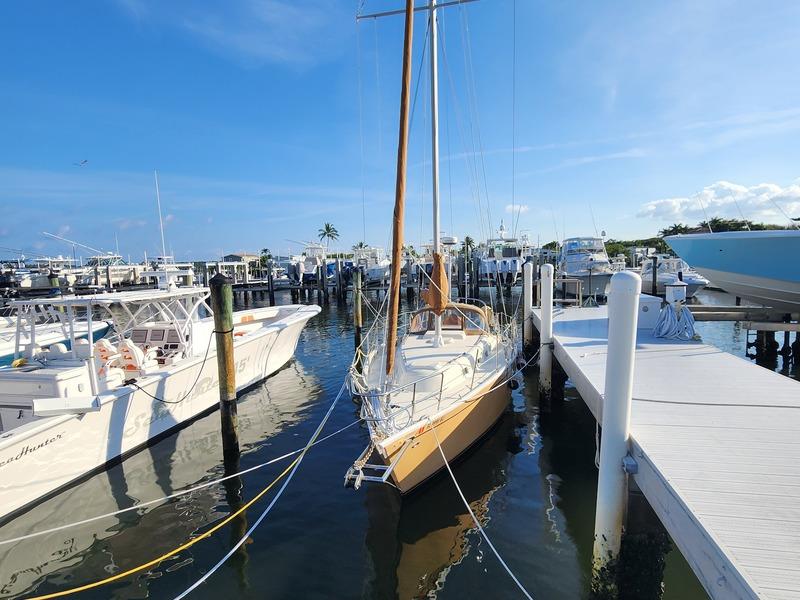 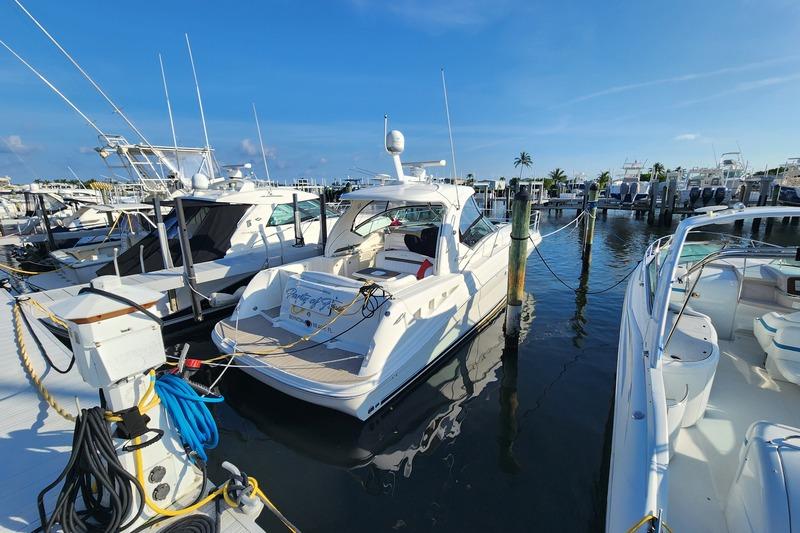 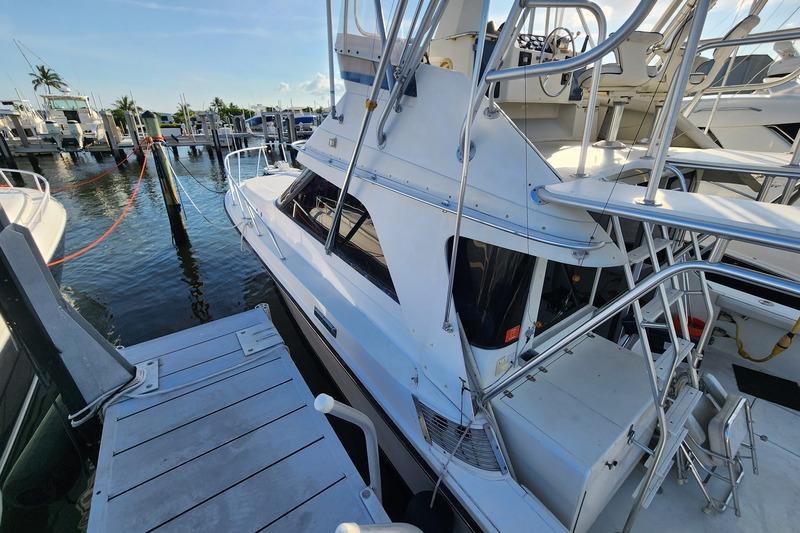 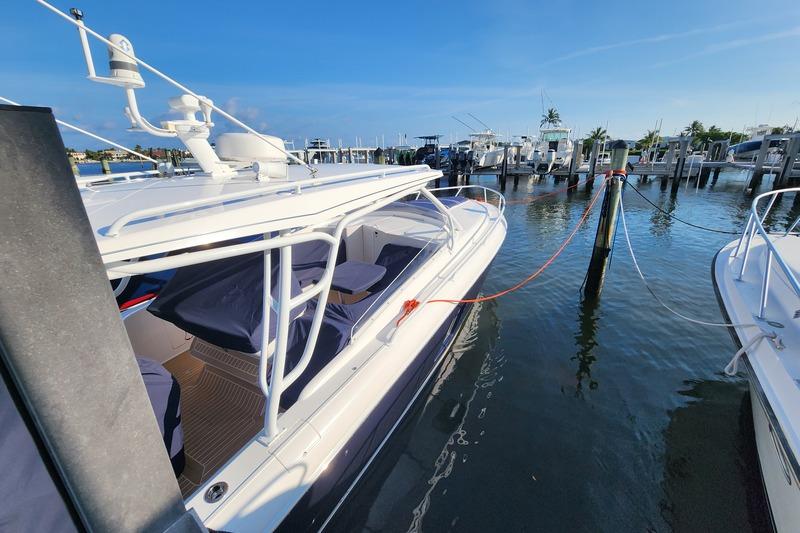 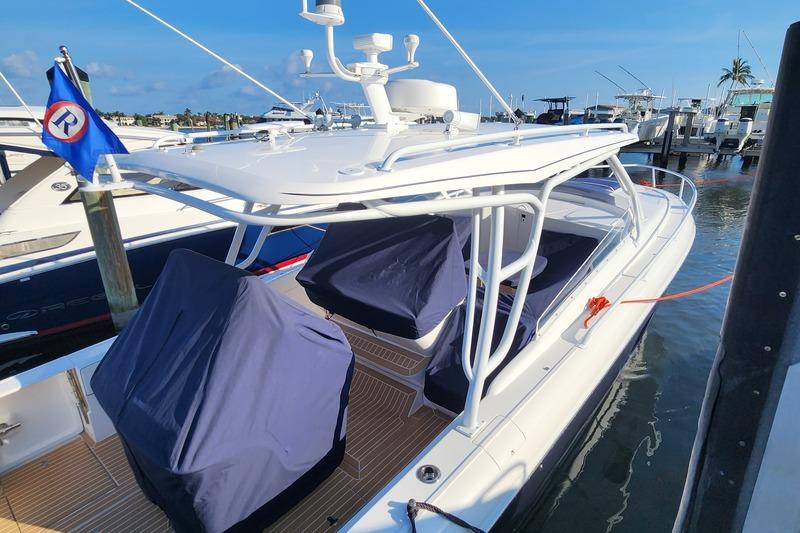 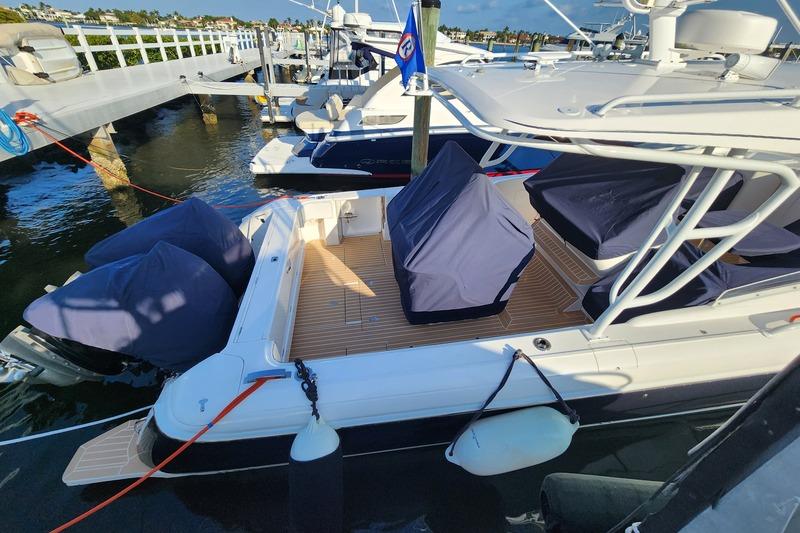 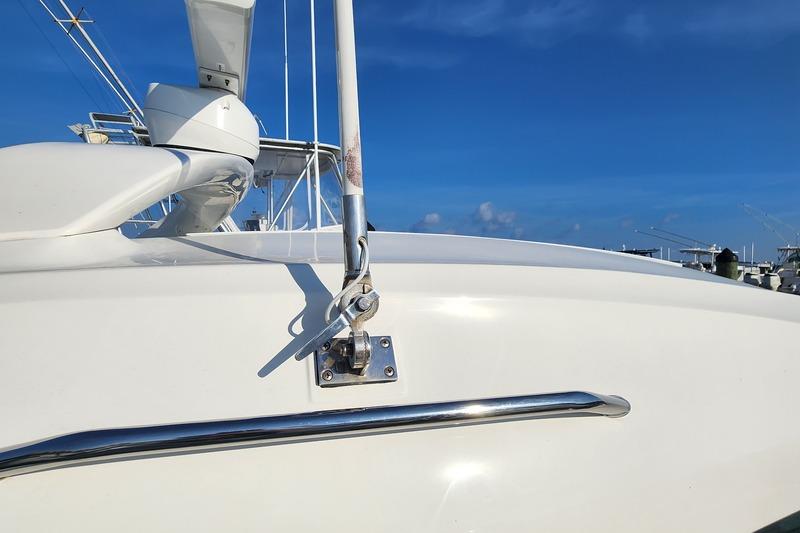 The first thing I notice about Hurricane’s new SS 192 RL (hurricaneboats.com) is that it looks like an SS 188 OB that’s been doing some weightlifting in the off-season. It’s now built like the linebacker of compact deckboats. Some boats of this type have a low profile that doesn’t inspire a lot of confidence when the wind is whipping, but that isn’t the case with the 192 thanks to its thigh-high interior freeboard. Counterintuitively, while the new 192 RL sits high in the water, thanks to its higher gunwale height, designers actually lowered its center of gravity, which improved its handling characteristics, including making it more seaworthy. UNIQUE FACTOR
The second thing I notice about the SS 192 RL is the new styling. Our test boat had the full gray hull with Orange Twist graphics that looked contemporary and stylish. The number of available color combinations is staggering. Buyers have eight color choices each for a full hull, top, bottom, top and middle, top and bottom, and middle and bottom; plus, the deck tape and graphics. These color options range from $113 for the top and middle color to $767 for the top and bottom package. And that’s just the exterior.

Inside, our boat had the white upholstery with Orange Twist accents, which is but one of 10 optional Sport Package possibilities that cost an extra $1,234 but really add some pop. Gray upholstery is an option. The package includes a gray fiberglass driver’s console, a sport helm chair, a black stainless steel rubrail, a windshield, stainless cupholders, pull-up cleats and a stainless Bimini frame. To keep people off the beautiful upholstery, the starboard-most of the upholstered stern bench seat bottoms can be flipped and moved into place to reveal a nonskid gelcoat walkway. PERFORMANCE
Usually when we test a new model, manufacturers give us a boat with the max power or close to it, to wow us with its sporty performance, but a good test of any hull design (and builder’s judgment) is how well it works with its least powerful engine option. Hurricane will rig its boats with any outboard brand (subject to dealer availability), so buyers have a wide range of options — I counted 54. HANDLING
One time at a press event in Biloxi, Miss., we took a fleet of different types of boats on a group ride to Ship Island, which is a few miles offshore. The wind was up and we were going to run straight into steep 4-footers. I drew a sub-20-foot deckboat (not a Hurricane) to drive. It had the typical low-slung open bow, so I took a peek out of the inlet and promptly turned around and headed back to the harbor, which was announced over the radio channel we were all monitoring. Despite knowing I was in for some ribbing, I didn’t feel it was safe to proceed. I certainly don’t advocate taking the SS 192 RL out in conditions like that, but sometimes boaters get caught in conditions not of their own choosing, and for a deckboat, this one inspires confidence.

Thanks to its cathedral-style hull, which has 13 degrees of deadrise, it has lots of lift. On plane, the bow rises slightly and stays there, giving the driver a nice margin for error if it gets lumpy. Conditions on test day on Lake Wawasee in northern Indiana were benign, but having driven similar Hurricanes before, I know the flattish hull provides excellent side-to-side stability; the tradeoff is a rougher ride in the chop.

BEST USES
With an 8-foot, 5-inch beam that’s carried far forward, the SunDeck Sport 192 RL is ready for the whole gang to come along for some fun in the sun. The RL designation refers to its rear lounger cockpit layout. The 192 OB is rated for 10 passengers, same as the 192 RL, but the OB model has a matching captain’s chair to port, which delivers less rump-resting space than the RL’s unbroken U-lounge seating configuration, which comes with a rear lounger to port. For comfort, the rear lounger’s seat bottom is wider where a passenger’s rear end rests and gets narrower aft where his legs reside. Up front, the wide bow is encircled by seating that includes twin recliners. At the bow is a removable section, so people boarding up front on the roomy foredeck don’t step on the upholstery. A bow boarding ladder will facilitate beach landings.

For owners who love to wet a hook, Hurricane offers a fishing package ($460) that includes a pedestal fishing seat for the bow, a livewell, rod storage clips and a trolling motor pre-rig. Garmin, Simrad and Lowrance fishfinders are offered and range in price from $254 to $1,060.

Hurricane takes an a la carte approach with the SS 192 RL and leaves it up the buyer to purchase specialized features for activities such as skiing. It offers four choices for ski tows, starting with a fixed tow bar for $294. A telescoping unit costs $707 and a TurboSwing XXL — a stainless steel rail the goes around the outboard — costs $1,014. If watersports such as wakeboarding are in the cards, buyers can go with a tower, for $2,507.

PREFERRED SETUP
Everyone entertains on a boat, and buyers can maximize the fun with a few well-chosen options. White tables for the bow and stern cost $347 apiece, and upgraded woodgrain ones cost $380 each. Although a Marine Audio 100 Bluetooth stereo comes standard, a little boost to an MA300 unit with LED-lit speakers costs $280, while the max upgrade is a Light It Up II system ($954) that includes a Polk Audio amp and black speakers that put on a light show. A Polk subwoofer with an amp costs $1,127.

At the newly designed helm, the seat height has been dropped so the console provides a little more protection. A pair of standard gauges are to each side of the wheel and there’s room in the middle for electronics. Digital gauges would be a good upgrade, and Yamaha’s are $987. Even with the VF115, buyers will kick themselves later if they get cable steering instead of Sea Star’s hydraulic system ($1,134). Hurricane mandates it for 150 hp and larger motors, but it’s a must-have with any engine if watersports are going to be engaged in frequently. PURCHASED BY CODY BUSH, DEATSVILLE, ALA.

PURCHASED AT RUSSELL MARINE, KOWALIGA, ALA.

I would love to have a ski tow tower. I also wish the toggle switches had metal dash mounts. The plastic ones are brittle and prone to breaking.

I’ve never owned a boat in my life, but when I bought a lake house on Jordan Lake, I knew I needed to get one. I wanted something that wasn’t too big but was versatile enough to go skiing, cruising and occasionally fishing for catfish, bass and bream. Our lake is pretty big, so the boat had to be able to handle rough water. The Hurricane 192 RL is the perfect boat for me and was within my budget. The seats are really comfortable and the performance with the Yamaha outboard is outstanding. Jordan Lake is beautiful and has some cool places where other boaters like to hang out, like a beach near a waterfall that has a rope swing. I also love cruising around with my friends and doing watersports — wakeboarding, kneeboarding and tubing. Chris at Russell Marine was great. He stayed in constant contact with me during the buying process and answered all my questions. They are really quick to provide service whenever I have an issue.