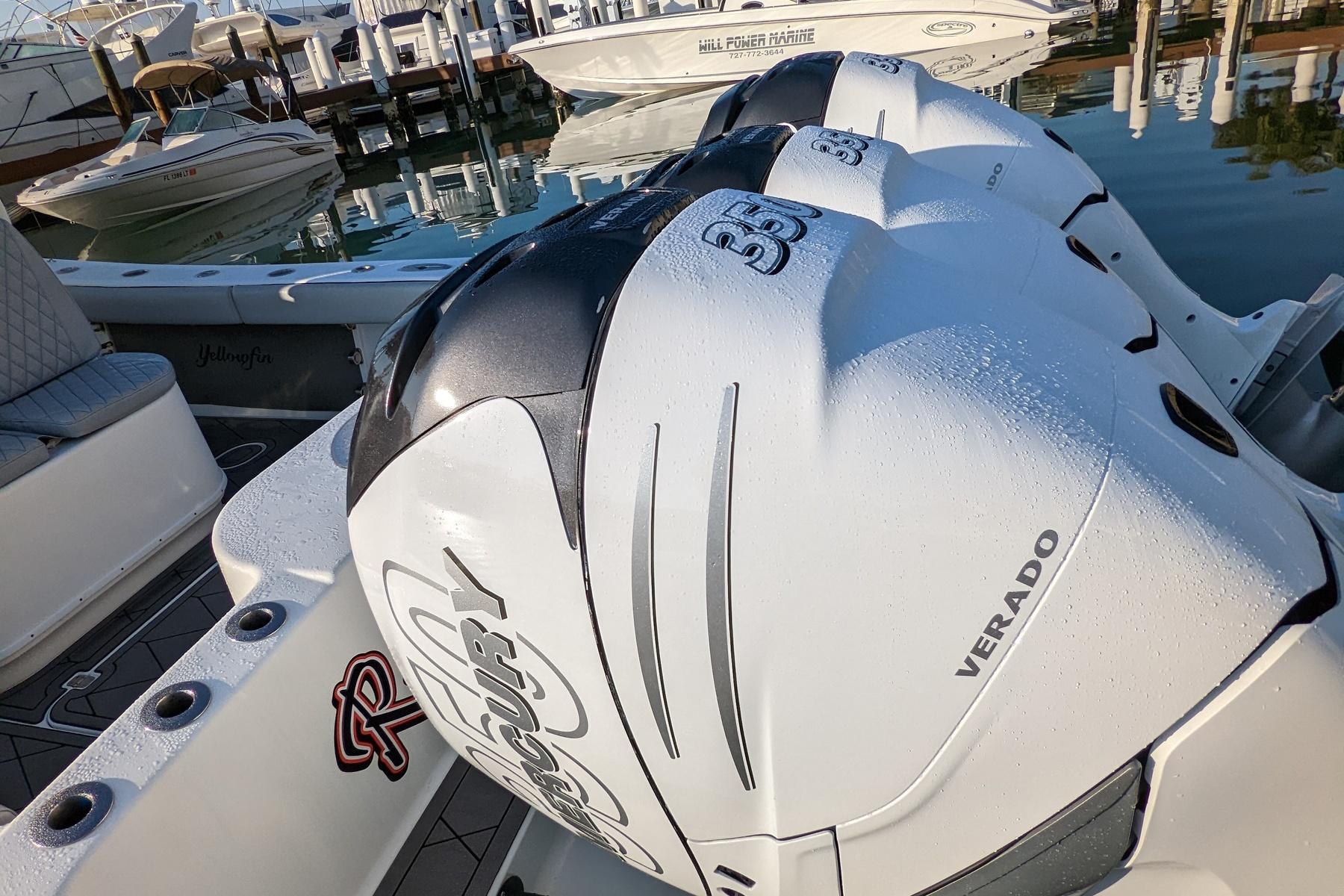 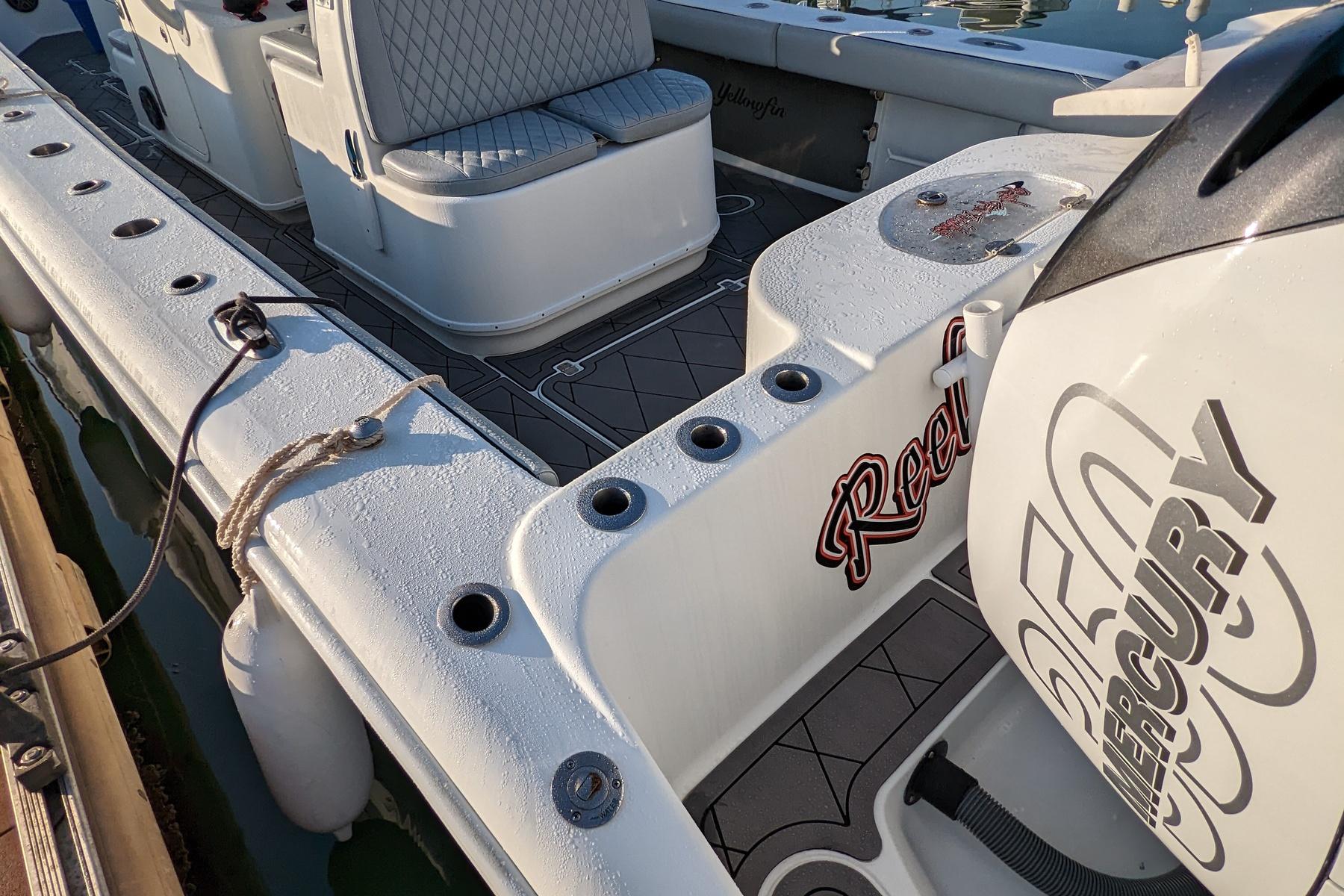 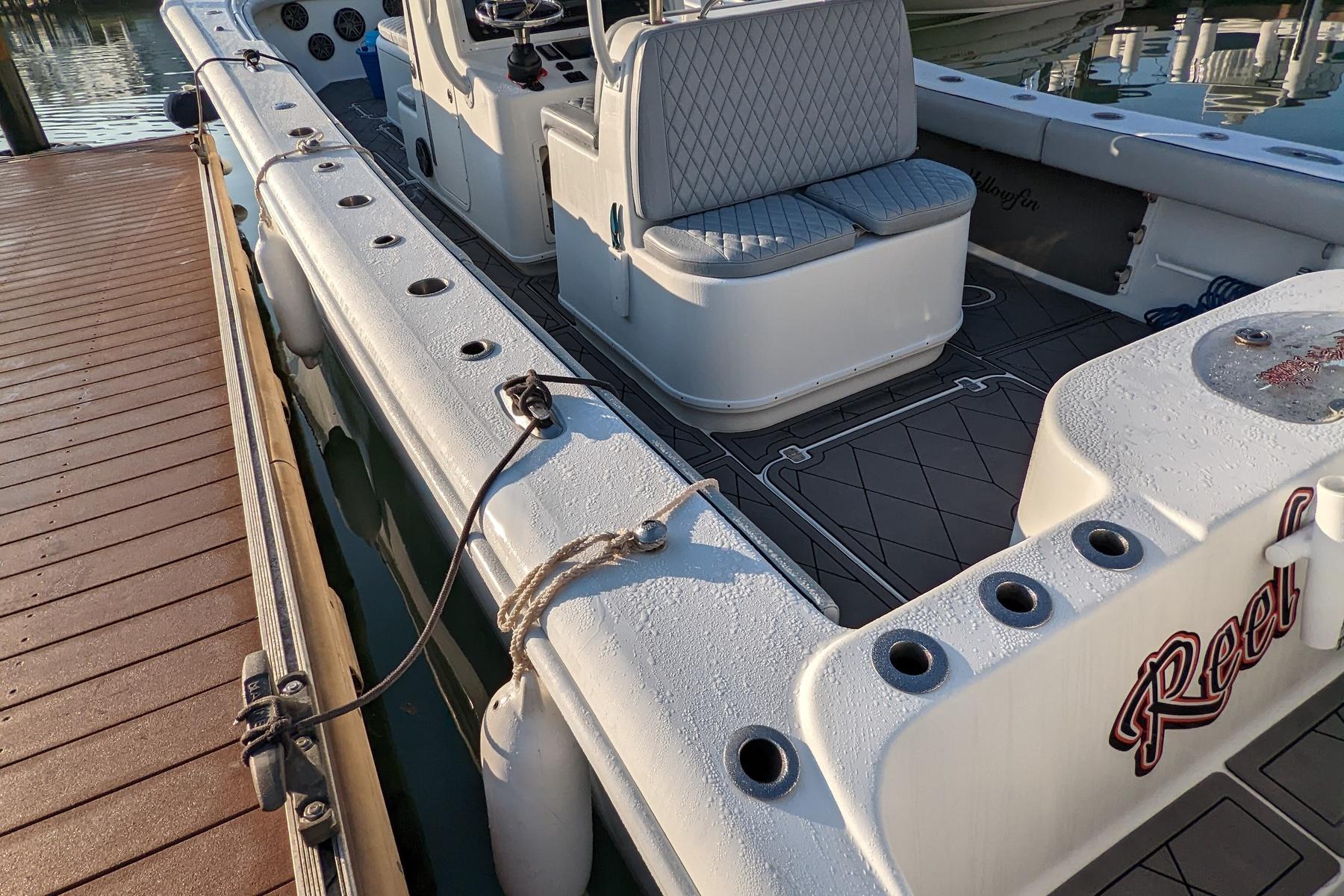 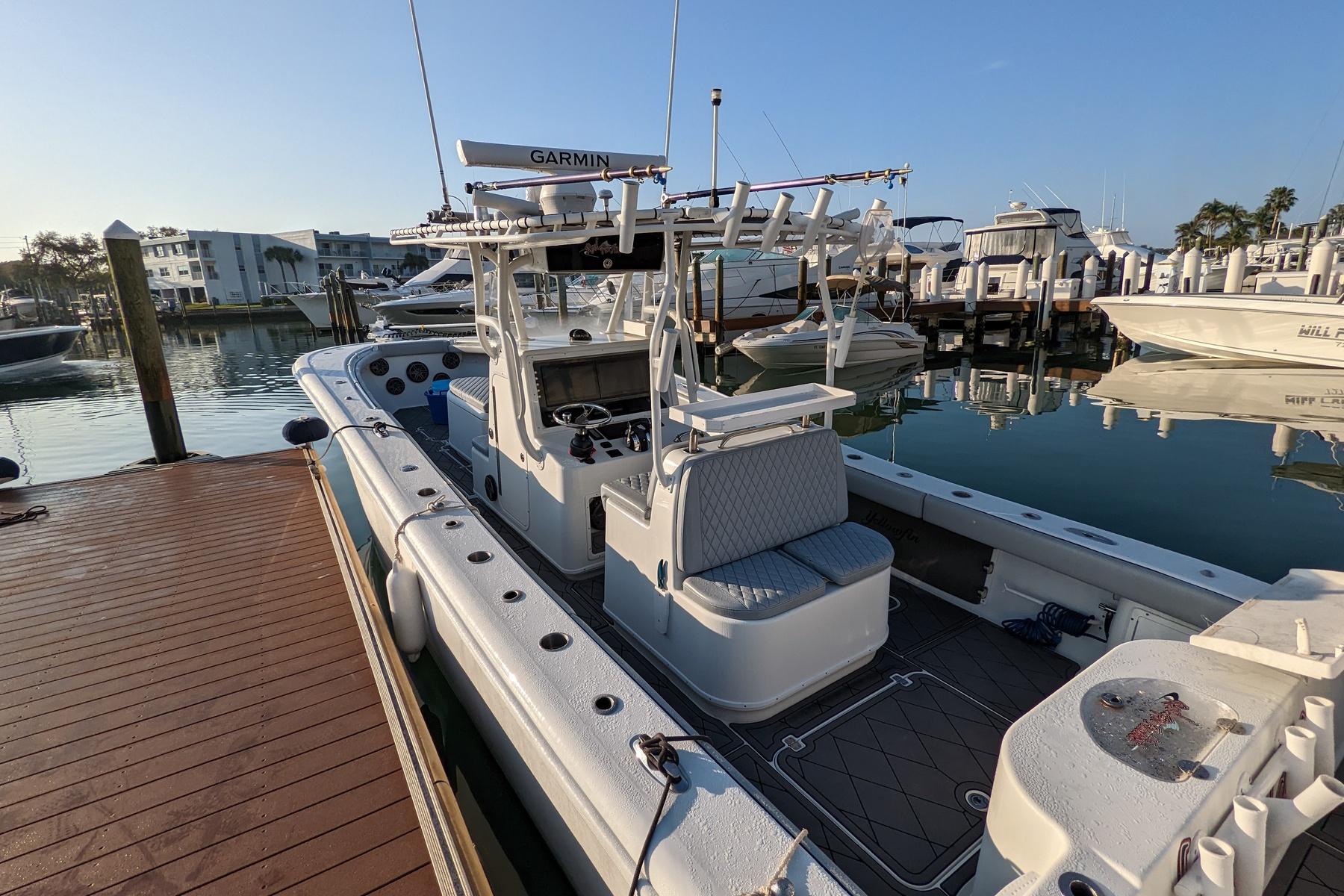 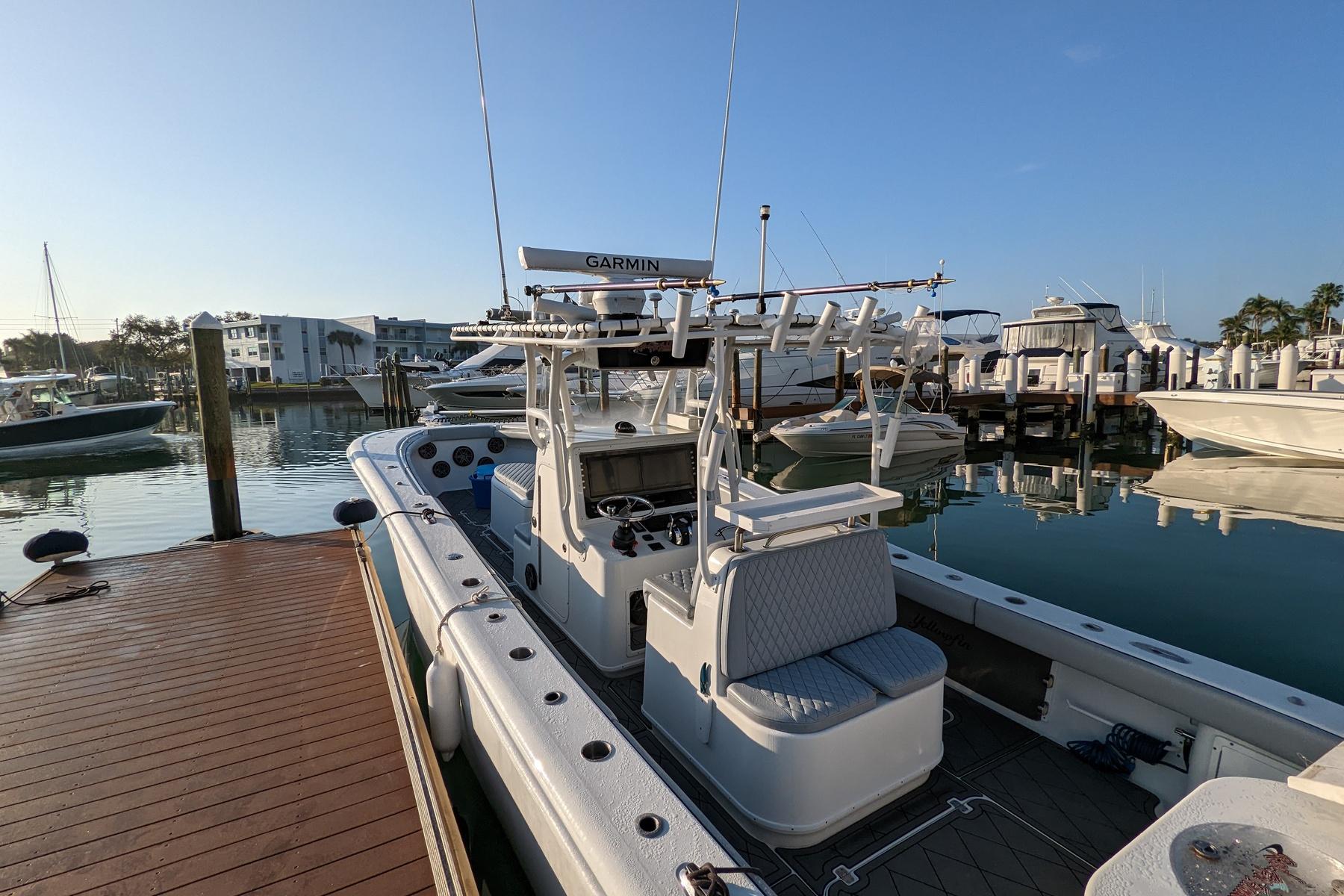 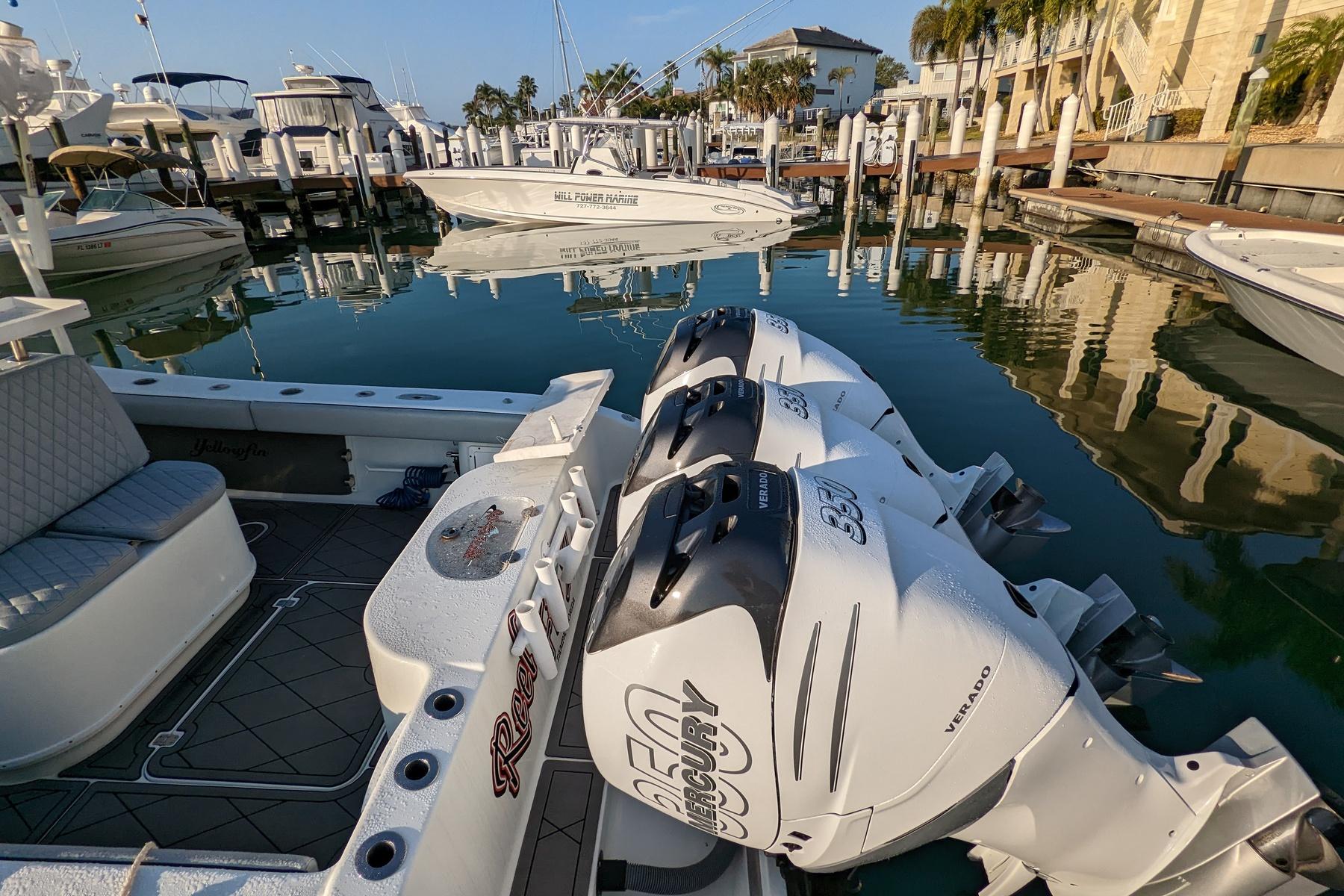 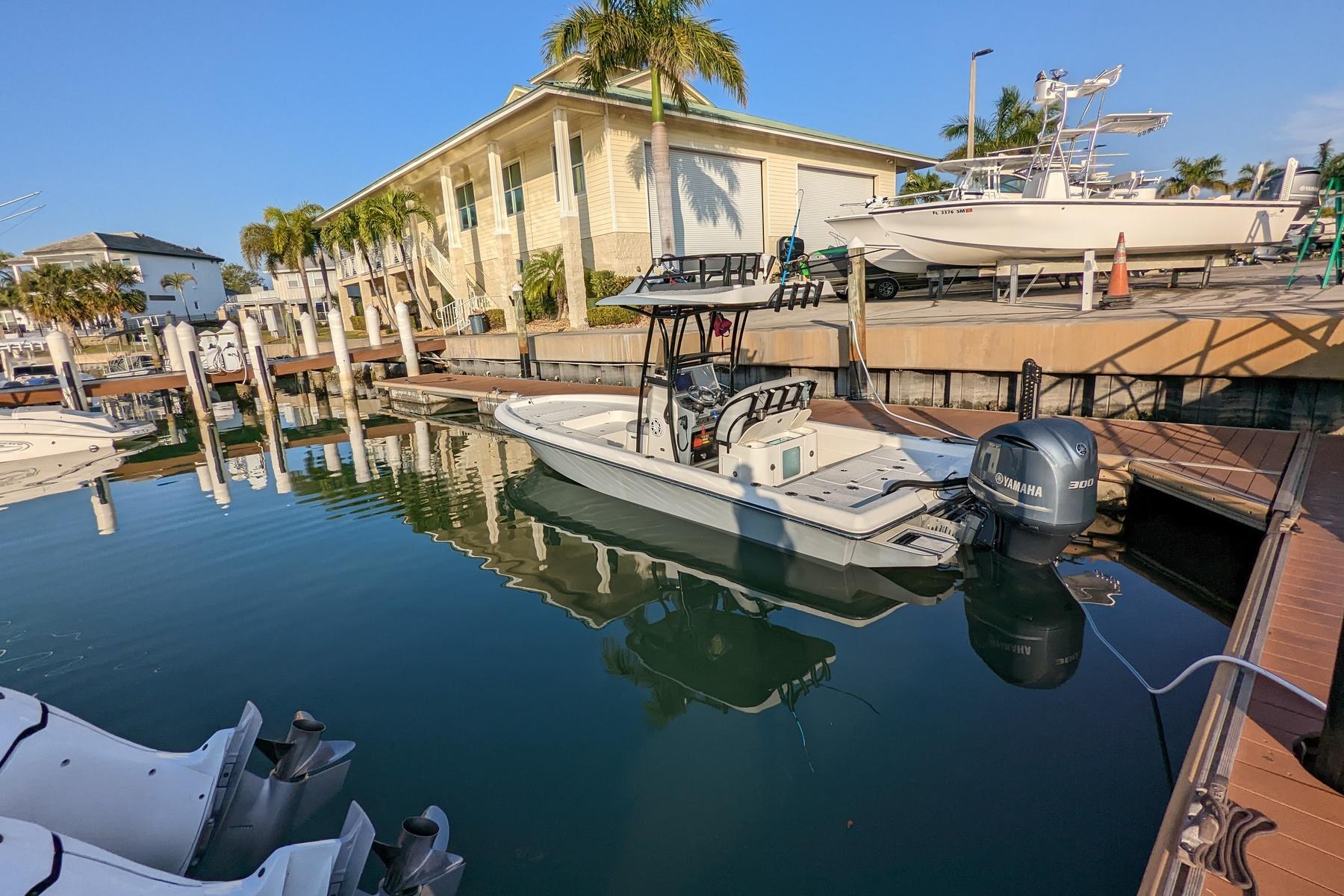 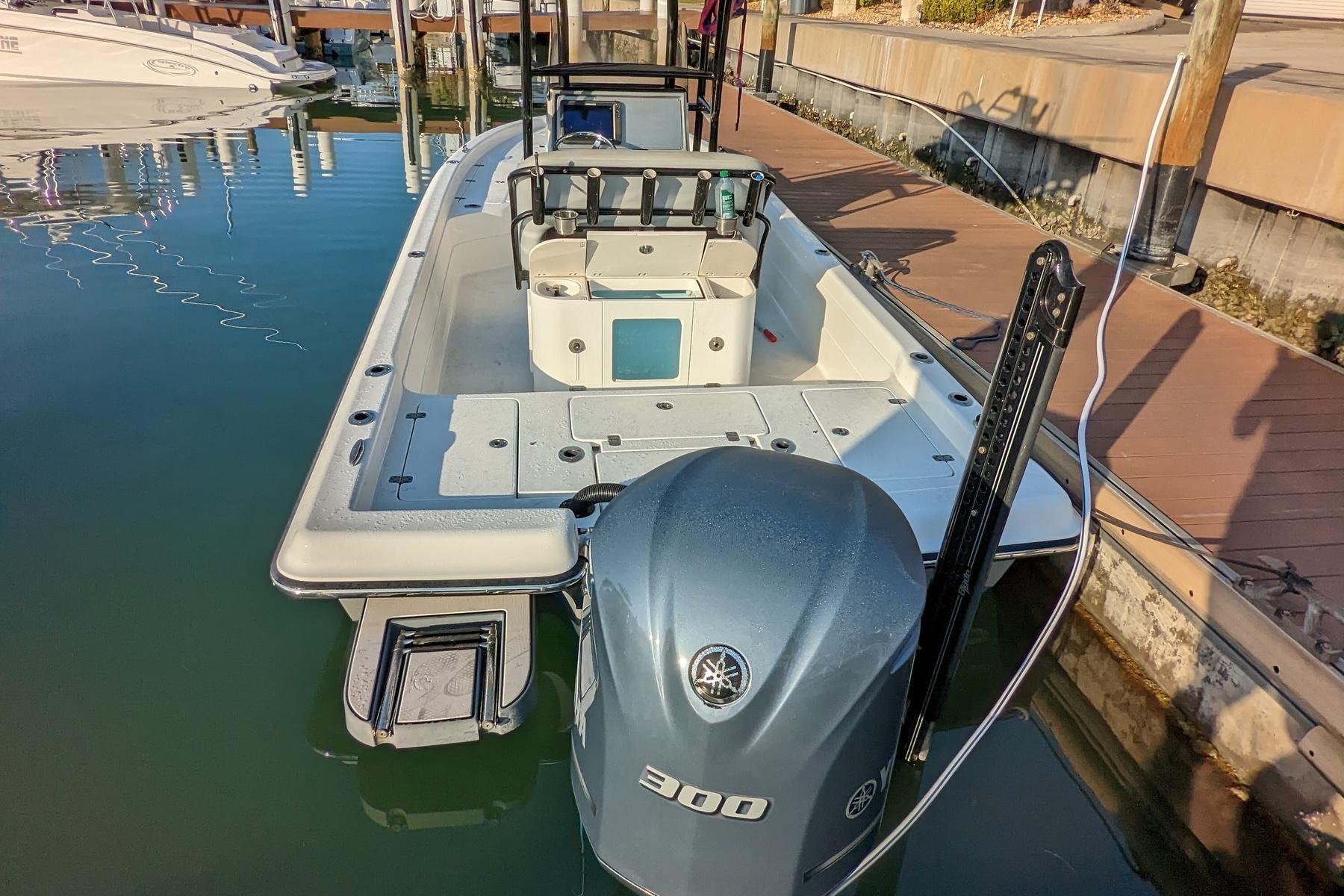 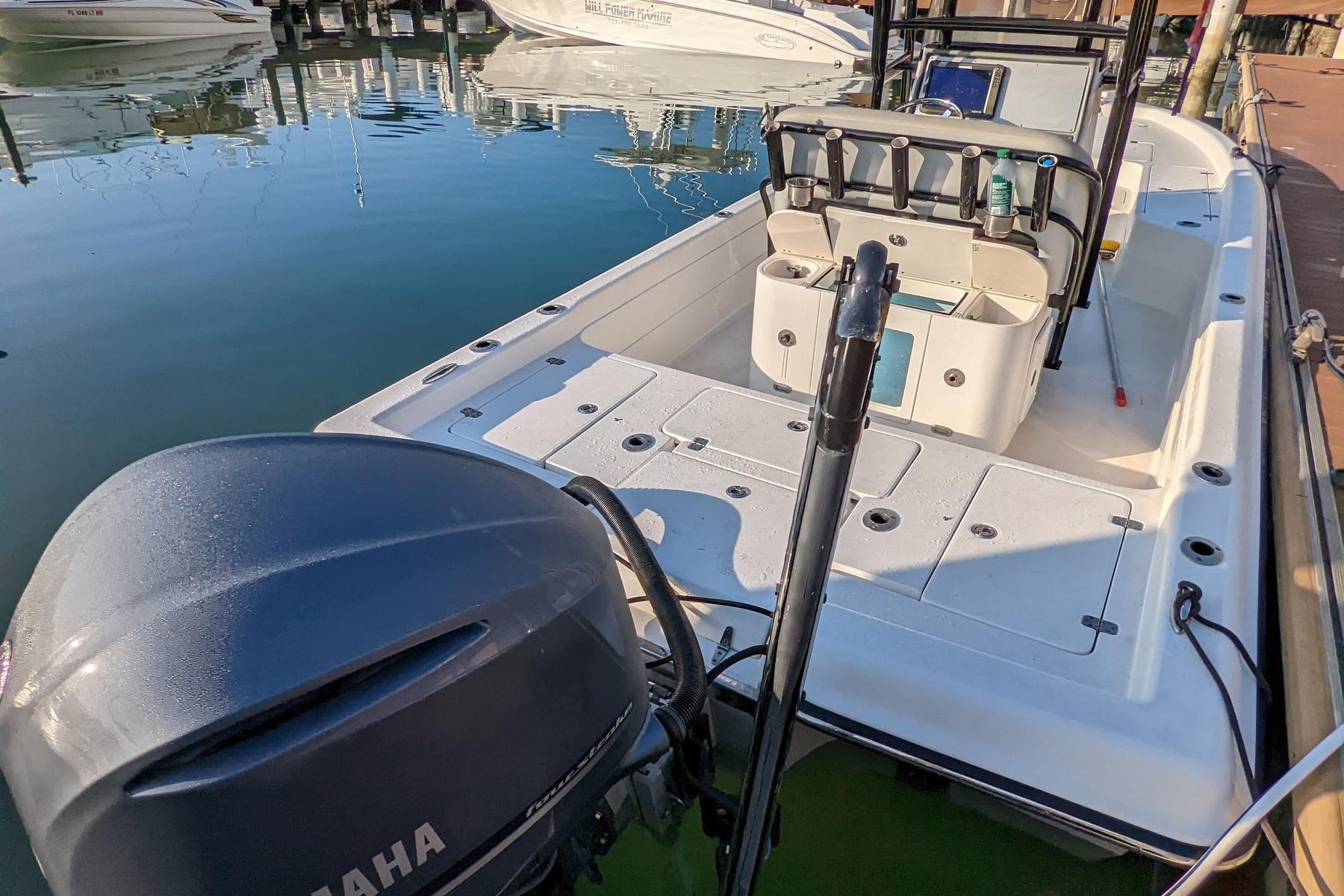 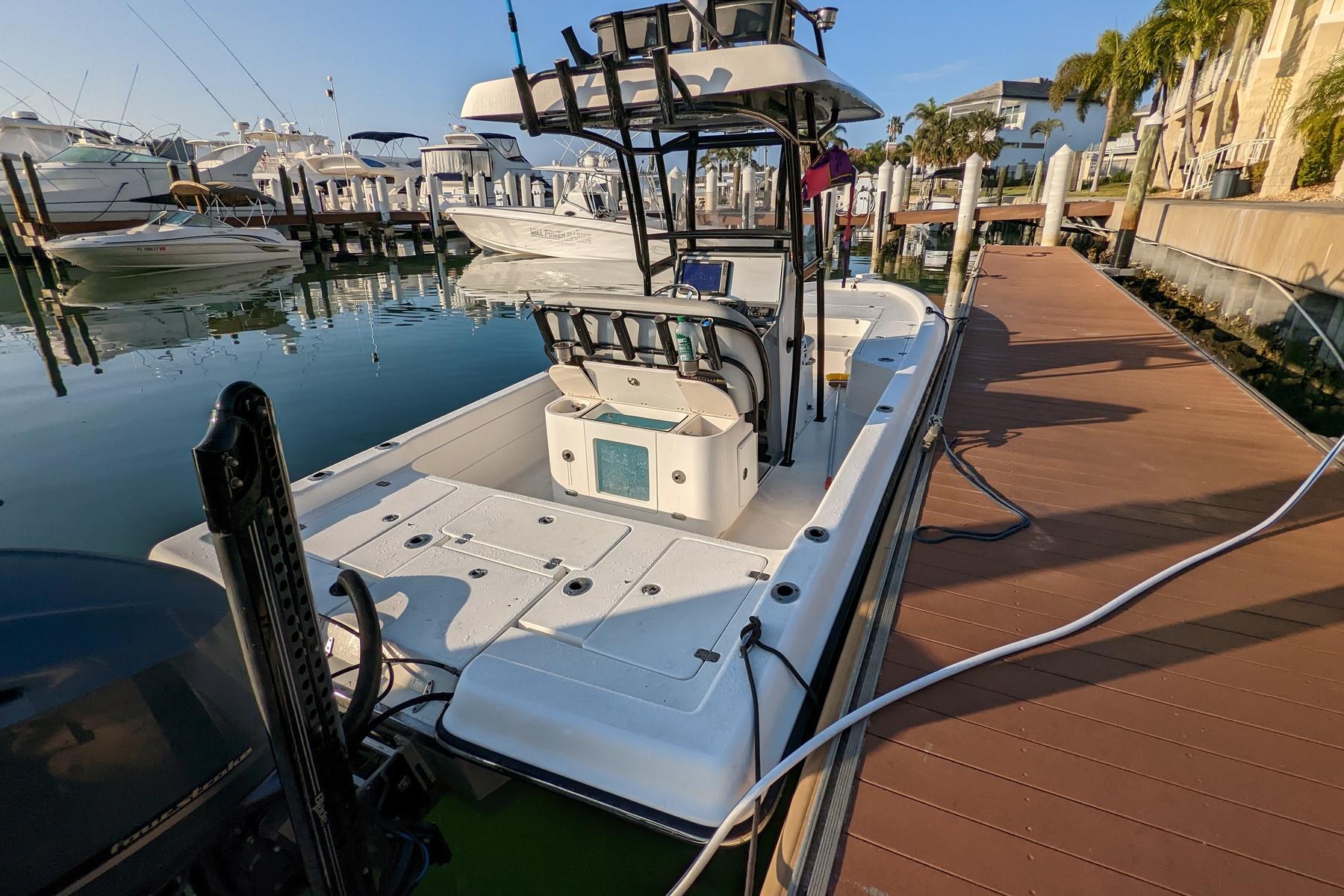 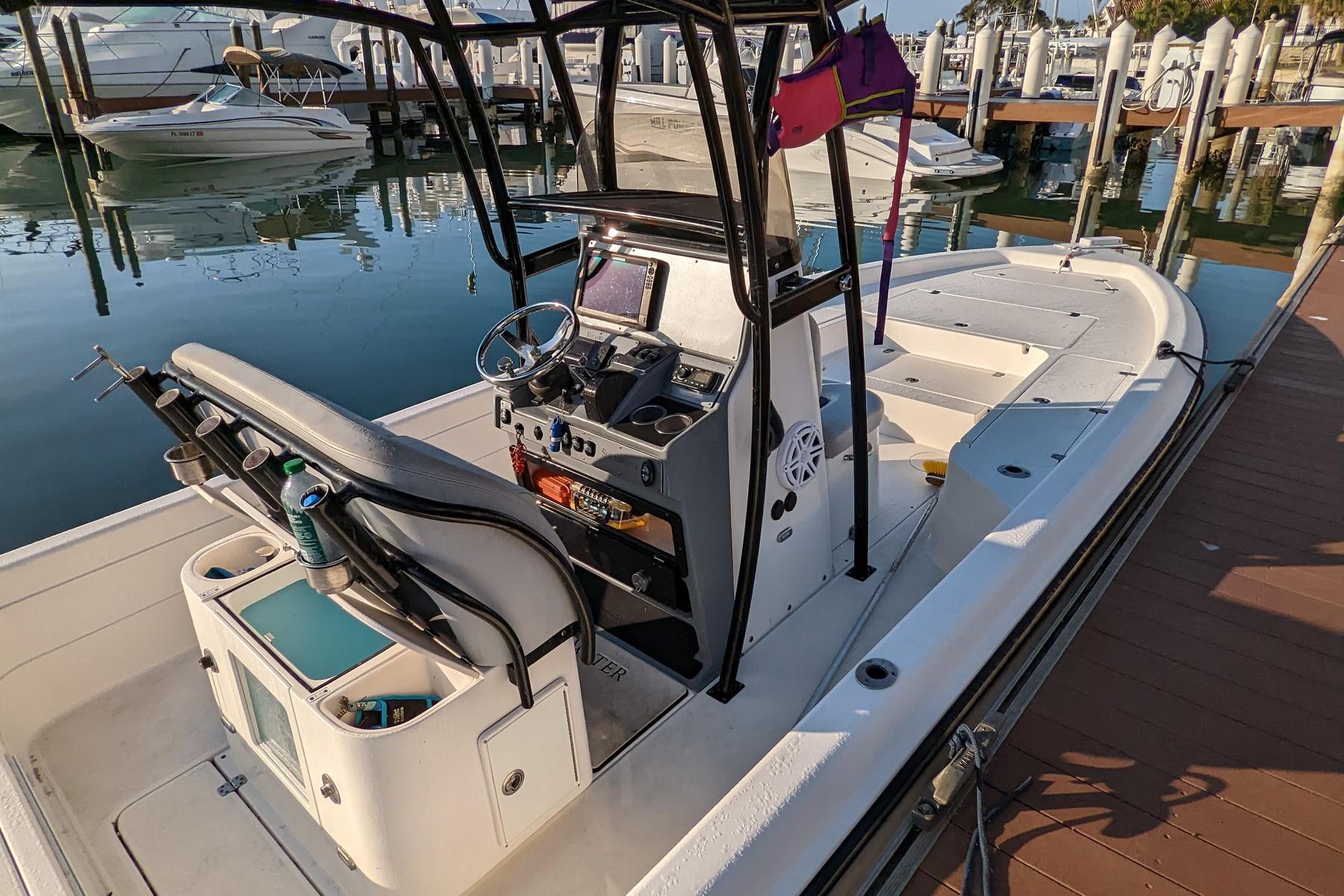 Often, the biggest battle an angler faces on a new fishing boat comes while the boat is still in the showroom. While one spousal contingent is determined to get a family boat, the angler faction wants a hardcore fishing machine. Fortunately, the NauticStar 231 Angler makes everyone happy, even if the fishophile in the clan might need to lean against the name badge on the center console to obscure the word Angler during the dealership visit.

One of the NauticStar 231 Angler’s most noticeable features is a huge foredeck that makes an excellent casting platform for multiple anglers. Fly-fishermen in particular will love the fact there is nothing to snag loose line — not even a railing. Pop-up cleats to port and starboard keep things tidy, but because the anchor locker sits fairly far back on the deck, one more pop-up cleat at the bow would be nice, for an even pull at anchor. There’s plenty of room to add a pedestal fishing seat ($400), a trolling motor and a gimbal-mounted electronics display — even enough real estate to lay out for sunning.

Abaft the foredeck, the 231 Angler morphs into a family bowrider, with bench seats that encircle the forward conversation pit/living room. Our test boat was equipped with removable backrests ($668) for the forward-facing bowrider seats, which have a decent amount of recline and stow away when not in use. The stylish Doeskin and Caribbean Cream seat cushion bottoms can be removed for fishing. Underneath the bench seats are two insulated fishboxes for storing your catch; they have overboard drains and can also be used for dry storage. Under the center bow seat is a 15-gallon cooler with a tight-fitting hatch to keep beverages cold. A jumpseat in front of the console adds seating, and underneath the seat bottom is a 20-gallon livewell with a lid that’s held open by friction hinges, for one-handed operation. When it’s time for lunch or a sunset cruise, pull out the optional bow table ($543) for snacks and beverages. It has a lower position to create more angler casting room and an optional pad to create another sunning area.

NauticStar is a Yamaha partner, so there are really only three choices of power: the F150, F175 or F200, which is this boat’s max and comes at a reasonable $3,808 upcharge over the F150. Our test boat featured the latter, and since all three engines are based on the same in-line four-cylinder platform, there’s no weight penalty for going with 200 horses — a no-brainer to me. The F200 gave the 22-foot, 9-inch 231 Angler plenty of pop out of the hole and put it on plane in 3.2 seconds. The 231 accelerated quickly to 30 mph, in 6.6 seconds. Top speed with the 200 hp Yamaha was 47.1 mph. (Surprisingly, Yamaha tests, which are very accurate and typically conservative, showed a top speed of 45.1 mph with the F150.) Such performance can probably be attributed to the boat’s relatively shallow deadrise of 13 degrees, which not only helps top-end speed but makes it more economical to operate because it tends to run on top of the water rather than plow through it. That same Yamaha Performance Bulletin showed the F150-powered rig got nearly 4.85 mpg at an econo-cruise speed of 23.3 mph and 3500 rpm. Another surprise on the Yamaha test with the F200: Not only was there no fuel economy penalty at best cruise speed, it actually got slightly better mileage (4.91 mpg) at 3500 rpm, which netted it a speed of 26 mph.

The 231 Angler features the STAR Performance System hull design, which makes it extra owner friendly. STAR is an acronym that goes thusly:

Shallow-water draft thanks to its moderate deadrise at the stern.

Tow-great boat because of its full 102-inch transom width and shallow draft that makes it easy to extract skiers, even with a F150. It also makes the wake fairly flat, which slalom skiers will appreciate.

Acceleration is fast thanks to its planing pods and air-assist chine design that introduces air under the hull for reduced surface tension–related drag.

Ride is improved in choppy conditions thanks to its ultra-sharp entry; just trim it down a bit in the chop to take advantage of its cleaving tendencies.

NauticStar went to great lengths to make the 231 as balanced as possible. In addition to the livewell in front of the console, there’s another under the center jumpseat in the stern, with a 27-gallon capacity. Those two, plus the cooler in the bow and the 94-quart standard cooler under the leaning post, are all on the centerline, which helps prevent listing that can adversely affect a boat’s tracking ability.

While the boat is called the 231 Angler, it could easily be the 231 Hybrid, because it does a lot of things well in addition to fishing. For entertaining, it comes with a standard four-speaker Bluetooth Infinity stereo; to add a little flash, it also comes with lighted cupholders. A deal-breaker for some families is the lack of a head compartment, but the 231 Angler has a large center console that can hold a portable toilet. It has more than enough seating to handle its 10-person capacity, and its triple flip-up jump seats at the stern have stainless steel latches instead of bungee cords to secure them — a feature you don’t often see. Anglers will love the dedicated cast-net storage under the port-side jumpseat. A lot of fishing boats forget to add a swim platform, but the 231 Angler has a large wraparound design with a boarding ladder. An optional ski pylon makes it watersports-ready. Four under-gunwale rod holders and two on the transom keep your fightin’ sticks safe and ready for action.

NauticStar has really upped its styling game with a rainbow of eight hull colors, such as the new-for-2015 Atlantic Blue that our test boat sported. But you can take it to a higher custom level for $464 by adding an accent stripe with a choice of eight colors. A Bimini top comes standard, but if you like, you can add a powder-coated hard T-top ($9,071), for an extra fishy look, or a less expensive canvas T-top ($4,500). The dash of the center console has plenty of room for flush-mounted electronics, and our test boat was equipped with the Lowrance Elite 7 HD unit ($1,320) in addition to the Yamaha Command Link gauges that have an eyebrow over them, for better visibility. Standard equipment includes a leaning post at the helm, but you can upgrade to a deluxe model with a backrest for greater comfort, for $986. Lenco trim tabs, which also cost $986, are another must-have.

Although the Yamaha F150 is fast enough for me, I wish I had gotten the F200 instead so I wouldn’t have to push it as hard.

My last two boats have been cuddy cabins, and when I lived up north I would spend the night on them pretty often. But since moving to Florida, I wasn’t overnighting as often, so I wanted to get an outboard-powered center console for its simplicity. Although I don’t fish a lot, I love its open floorplan and plentiful seating, so when I entertain, there’s plenty of room for everyone to sit. My girlfriend, Fernanda, and I love to take my dogs Sophia and Charlie and head to the Hillsboro Inlet, toss out the anchor and have lunch and go swimming. We also love just idling around looking at the beautiful mansions on the waterways around Ft. Lauderdale and visit local hotspots like Shooters, Nauti Dawg and Bahia Cabana. Complete Marine has been fantastic; they gave me a great deal on bottom paint, and anytime I contact them for service they take care of me immediately.