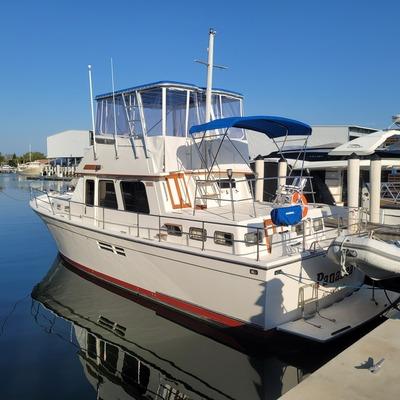 PlayCraft Xtreme owners are a little different. No, make that a lot different. While ambling along at a carriage-like pace might be OK for cruising through no-wake zones or at sunset, boaters who buy these high-test Powertoons tend to spend more time in the left lane of life than the rest of pontoondom.

Unique Factor
Our 2800 Xtreme test boat isn’t just unique for a pontoon boat, it’s unusual for the Xtreme line because it features two high-performance tubes rather than the usual three. Lest you wonder if this puppy is a neutered version, this very same boat won the annual Lake of the Ozarks Shootout in the twin-tube pontoon division with a top speed of 70 miles per hour.

The 2800 Xtreme is all about attitude, and what you see is what you get: a wolf in wolf’s clothing. The interior is classic go-fast that places as much emphasis on comfort as over-the-top looks, complete with finish line checkerboard-accented upholstery. One of the more unusual features of this and many other PlayCrafts is the large foredeck that keeps passengers farther back for better rough-water performance.

Performance
Under the chaise lounge seats in the stern lurks a pair of MerCruiser Scorpion Stroker 383s that total 800 horsepower. These are quasi-racing engines, but unlike those that have power bands maximized for top-end speed only, these display a power curve that feasts on the low end and launches this hefty 6,200-pound rig on plane in just 2.7 seconds. Give part of the out-of- the-hole credit to the RAC-R-FINS lifting strakes that also help it ride higher in the water.

Almost all performance pontoons are three-tubers, which adds the necessary lift to reduce drag from the logs. For this particular boat, the Dorris family elected to make this more like a racing cat by creating a design that would trap air between two hulls. The jumbo tubes themselves are 24 inches tall and a whopping 36 inches wide, which leaves exactly 3 feet between them. The airflow is controlled by an Air Entrapment Pad, which is manually adjustable and acts like a racing cat’s tunnel tab to give stern lift for reduced drag and a more level ride. All this adds up to a beam that’s a roomy 9 feet wide.

Handling
One of the Xtreme series’ claims to fame is the exceptional rough-water handling that is normally accomplished with three tubes. A lot of this has to do with the size of the tubes, and this twin-tuber sports two of the biggest we’ve ever seen. The pontoons also have surface-piercing nosecones for increased aid in cutting the chop.

The Xtreme is a true planing hull so it rides higher in the water than traditional tubes and actually displaces about the same as three 24-inchers for similar buoyancy. Our test conditions were annoyingly calm so we asked Jim Dorris, president and founder of PlayCraft who has run this boat in some very rough conditions on Lake of the Ozarks, how it did. “I was really amazed how smooth the ride was in the chop; it really handled rough conditions as well as our three-tube models,” Dorris said. “It’s also got a little more speed left in the hull. I expect to see this boat hitting mid-70s with more power.”

The main difference shows up in cornering. While the three-tube models have an inward lean on hard corners, the twin-tube 2800 remains very level and tracks well. Because PlayCraft takes a custom boat builder attitude, you can also get the 2800 with three tubes if you prefer this setup. Passenger capacity is a whopping 15. In fact when we tested it, the Xtreme ran better with half a dozen people aboard than with just two.

Best Uses
The Xtreme series resonates with former go-fast aficionados who desire to escape the cramped cockpits of offshore performance boats, but still retain that gonzo attitude. At raft-ups, invariably pontoons tend to be the gathering point, and the 2800 has the comfort chops to accommodate everyone. The first battle among passengers will be for the stern chaise lounge seats, which have a hot tub contour for ergonomic comfort.

On the starboard side of the bow is one of the largest sofas you’ll see. Not only does it have a nice layback, but flipping the seat bottom toward the centerline via the piano hinge reveals the three-tub roto-molded storage compartments. The only downside is that if you need anything, everyone on that side has to stand up, but on the plus side you can store everything in 5.2 seconds.

With this power package you can take the whole neighborhood skiing, all at the same time. A sturdy ski tow creates a high pull point, but ski storage will be above deck with the twin-tube configuration. Three-tubers will have a centerline storage compartment the size of a Manhattan apartment.

Preferred Setup
The beauty of PlayCraft is that if you don’t like something, you can customize it your way. I think they like the challenge of accommodating even unusual requests, so bring it on. The helm station is set up beautifully and matches the attitude of the boat with Livorsi racing components such as the Zero-Effort binnacle shift and throttle levers, orange-bezeled gauges and Milsco racing seat.

Our dash display includes MerCruiser’s Racing version of VesselView plus GPS, which has 20 different screens that show 30 engine/boat functions. The rails are powder-coated as are the twin tubular swim platforms, and if you choose to take the paint scheme all the way, you can have the tubes done as well.