Robalo’s new R200ES is a family-friendly fishing boat that knows how to have a good time. 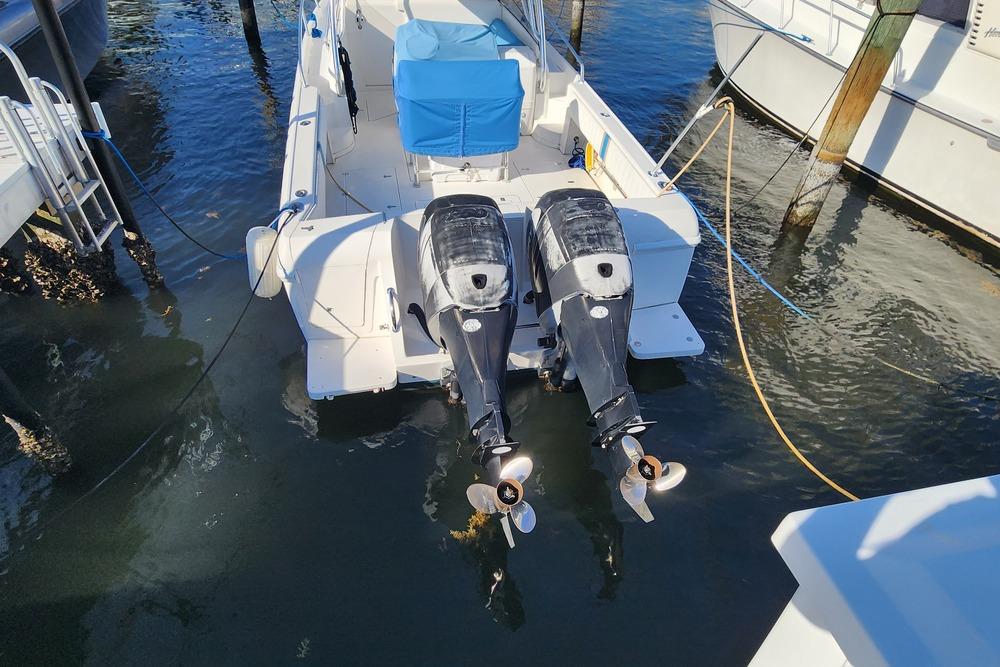 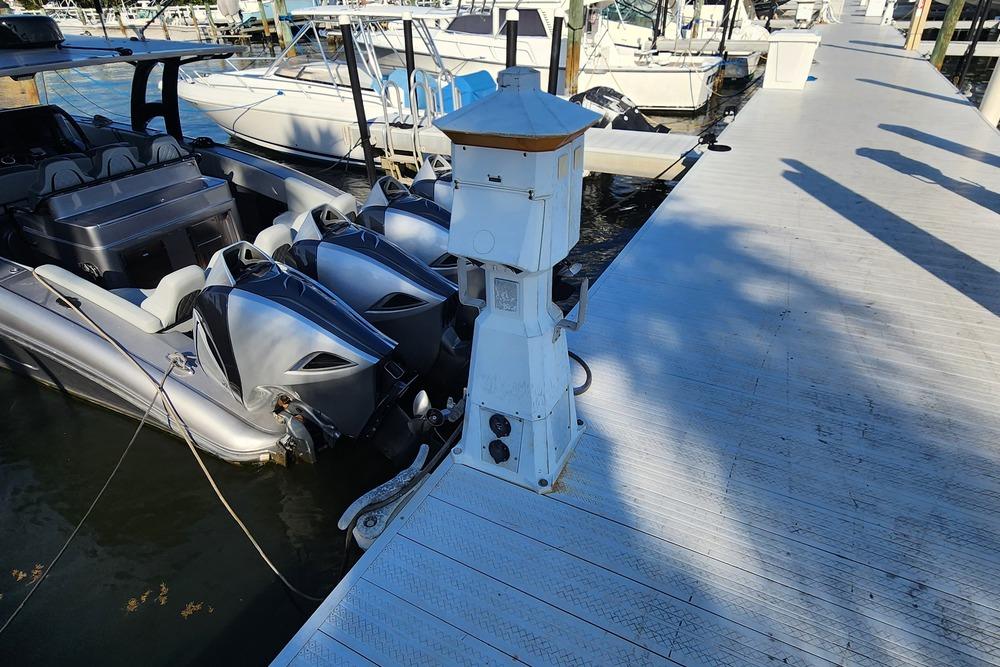 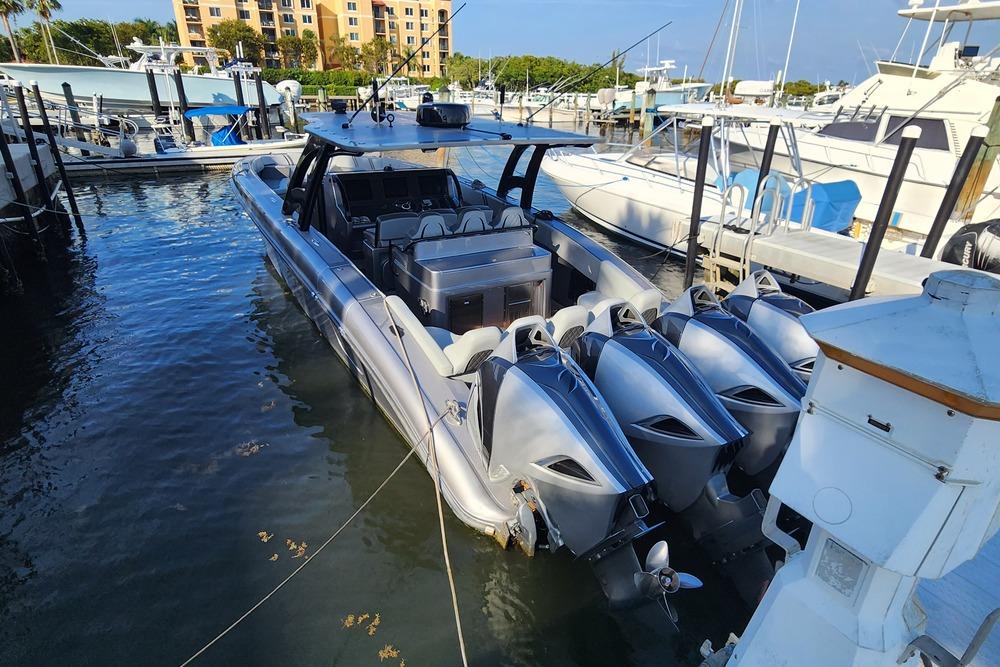 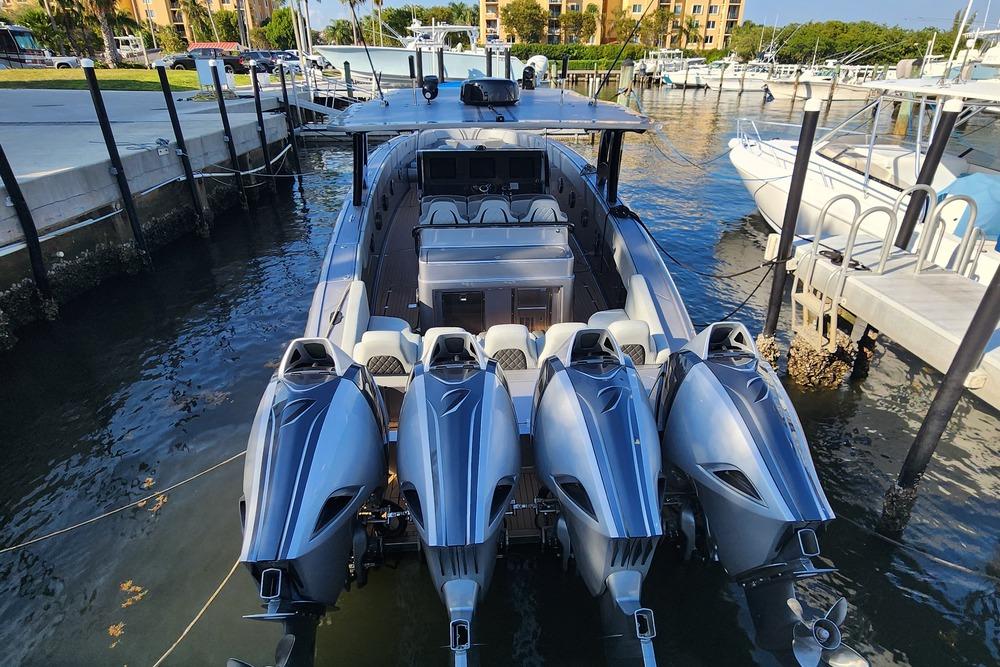 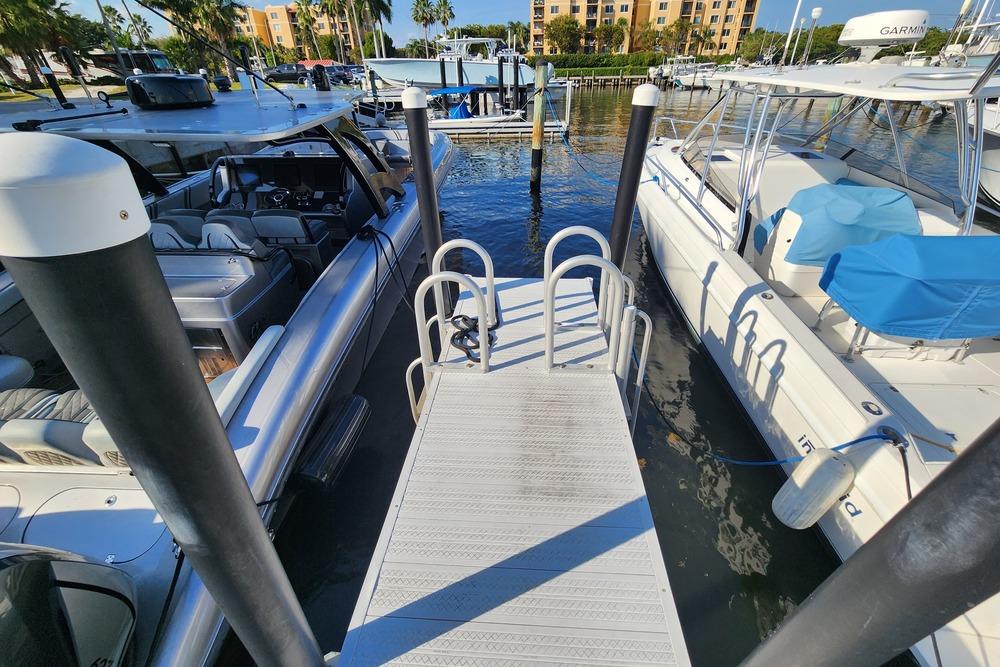 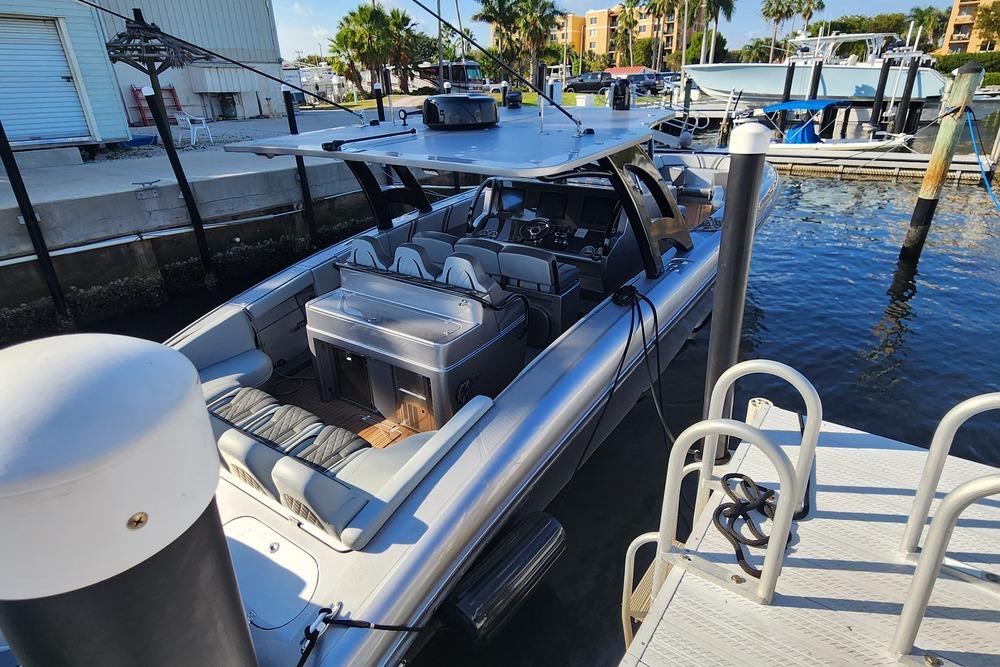 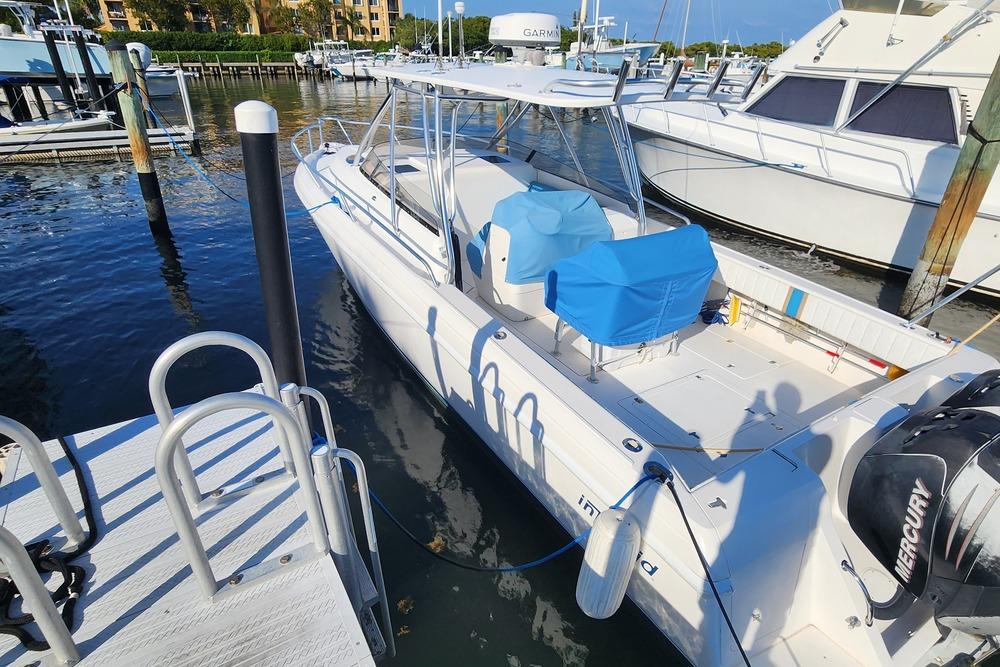 The legend of Robalo began in 1969 when it produced its first model, a 19-foot center console that had a reputation for being a tank, in the best sense of the word. Unsinkable and indestructible were its two most common descriptors. People today look back to the early models with great nostalgia, and those boats are still highly sought after. Robalo’s newest classic is the R200ES, which might be small in length but is big everywhere else.

Like the R180, its smaller sibling, the R200ES feels like a bigger boat than its 20-foot, 7-inch length suggests, thanks, in part, to its ultra-high gunwales. On most fishing boats of this size, anglers fighting a fish find themselves leaning against a knee-high gunwale, which is neither comfortable nor secure. But on the R200ES, all but the tallest will be able to lock in and brace their thighs against the really wide coaming pads. Toe rails also help anglers stay on board during a fish fight. Toward the bow, the shearline rises, giving it an extra bit of freeboard that drivers will appreciate when they see a large wave coming. The gunwale width is generous, especially at the bow where it morphs into a wide, flat area that’s perfect for throwing a cast net or sight-casting. Diamond non-skid is barefoot friendly and provides good slip grip. One of the wow factors on the R180 we tested a couple of years ago was the massive head compartment that was accessed by swinging open the entire front end on the console like a big refrigerator door. The R200ES has one too. The portable toilet–ready head compartment also serves as an easily accessible storage compartment. The huge center console, whose dash can accommodate large-screen electronics, makes the head compartment possible. Curiously, though, Robalo only offers the 7.4-inch Garmin 721 and 741XS GPSMap fishfinder ($1,435) as electronics options despite having enough real estate for a 10-incher if the gauges were repositioned.

Our test boat had the optional anodized aluminum soft T-top ($3,060), which was really well braced in eight spots for zero wigglage. It’s no surprise the T-top is so well executed, since Robalo was the first to employ this now-ubiquitous feature. It offers plenty of canvas shade, and buyers can order the support tubes clad in black or white powder coating for an extra $980. Four rocket launcher rod holders keep things organized. Robalo makes sure buyers aren’t paralyzed by endless engine choices, offering just three Yamahas: F115, F150 and F200. Make that two choices, because the F115 just doesn’t crank out enough ponies to get the job done — borne out by a Yamaha performance test during which an F115-equipped R200 reached a top speed of 36.8 mph. Pricewise, choosing the F115 over the F150 would be the worst $3,060 anyone ever “saved.” Our test boat had the F150, the smallest motor buyers should consider, and it gave the R200ES a huge boost in performance, getting it on plane in 3.3 seconds, pushing it to 30 mph in 8.5 seconds and coaxing it to a top speed of 44.8 mph. The R200ES features a relatively wide 8-foot, 4-inch beam for its 20-foot, 7-inch length. It weighs a stout 3,000 pounds, which is 224 pounds more than a similarly styled Scout 215XSF, which is wider and nearly a foot longer. The Hydrolift Hull features Kevlar in its layup and aggressive reverse chines that give it lift and direct water down and to the side, for a drier ride. Extra-wide chines also add lift, which accounts for its slow planing speed of around 16 mph and its quick time to plane.

My overall impression was that I was driving a miniature offshore boat. The thick stainless steel wheel with a spinner knob ($80) and a thickly padded, sturdy leaning post didn’t hurt that sensation. And kudos to Robalo for including two deep storage wells at the top of the center console that will be handy repositories for cellphones, suntan lotion and fishing gear.

The R200ES took off with little bowrise and assumed a slight bow-up running attitude without having to trim the outboard up much. Our test boat had optional Lenco trim tabs ($700) that kept it running level, and should even when passengers congregate on one side. With the spinner knob on the wheel, I could whip it quickly into hard turns and it hooked up well. Robalo has two versions of this model, the more fishing-centric R200 and the R200ES we tested, which has additional family-friendly features but still takes care of the anglers. The biggest difference is the fixed bench seat at the stern. Under the starboard-side cushion is a 15-gallon livewell and next to that is dedicated storage for a five-gallon bucket, something every fishing boat has on it. The bench does eat up fishing space, but with its cushions stowed in the center console, it serves as a good fishing platform. The standard R200 has a pair of flip-up jumpseats in the stern that flank the 15-gallon livewell. Both models have twin 23-gallon fishboxes up front that drain overboard. Under the leaning post is a 70-quart cooler. Another addition to the ES model is the bowrider seatbacks that turn the forward cushions into chaise lounges. Instead of using a modified rod holder as a seatback receiver, it’s a flat blade that slides into a slot that prevents any side-to-side wobble. The seatbacks include some angle for comfort, a nicety that many builders neglect. The upholstery is more upscale on this model — special Nano-Block Technology vinyl has a brown accent stripe, which is repeated on all the vinyl, including the coaming pads and on the jumpseat in front of the console. A four-speaker Bluetooth stereo keeps the crew entertained when the fish are playing hard to get. The R200ES starts at a budget-friendly price of $38,260 with the Yamaha F150, which leaves cash for some options. Robalo takes care of the must-have features, including a standard dual-axle aluminum trailer. Buyers who forego the T-top to save a few bucks can still get some shade with a Bimini top ($845). Customization is possible with a choice of 22 hull colors, stripes and fish hook logos. The most expensive is the choice of six solid colors, which costs $1,045. About the only necessary options other than the ones mentioned thus far are the dual battery switch ($250) and, for folks into stealthing around, the factory pre-rig wiring for a trolling motor ($660). Pull-up cleats go for $225. For skiing families, the anodized aluminum ski tow costs $485. Purchased by Steve and Beth Black, plus Parker, 8, and Kayleigh, 23, Apopka, Fla.

I had my dealer install a Power-Pole. It could probably use more rod holders in the stern.

I’ve had many different kinds of boats but have never been too impressed with their quality. I am a meticulous person, and when I started looking at boats the Robalo stood out in its class for fit and finish. It also had features not found on other boats, such as a large head compartment, which is important when you have a family. My wife isn’t the most avid boater, so it had to be comfortable, and with the cushions in place, it’s a great family boat. With the cushions stored, it’s a good fishing boat. We have a condo on the Intercoastal in Flagler Beach, and it’s perfect for that area. We like to cruise around and stop in the shallows to swim, and all I have to do is press the button for the Power-Pole. I press the button again and we’re off.

My daughter, her boyfriend and I love to fish for trout and redfish, and the R200ES has lots of great fishing amenities. Dealer’s Choice has been a pleasure to do business with and they’re very hands-on. On our shakedown cruise, the owner of the dealership went along to make sure I knew how everything works.

One thought on “Robalo R200ES”