Scarab’s new flagship is a jet boat that can’t decide whether it’s a 25-footer or a 27-footer. 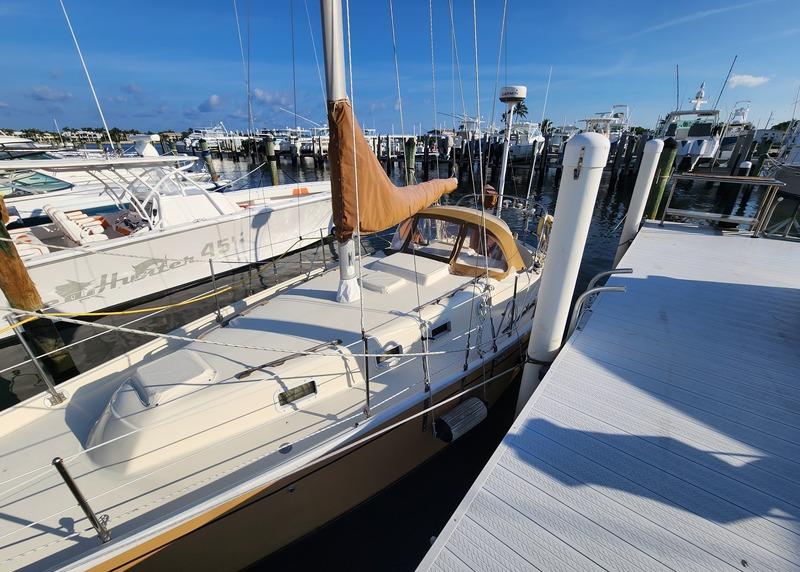 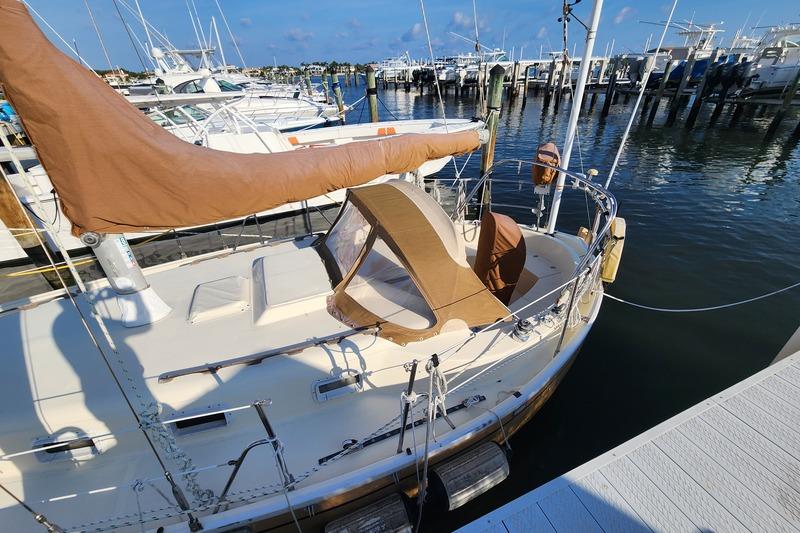 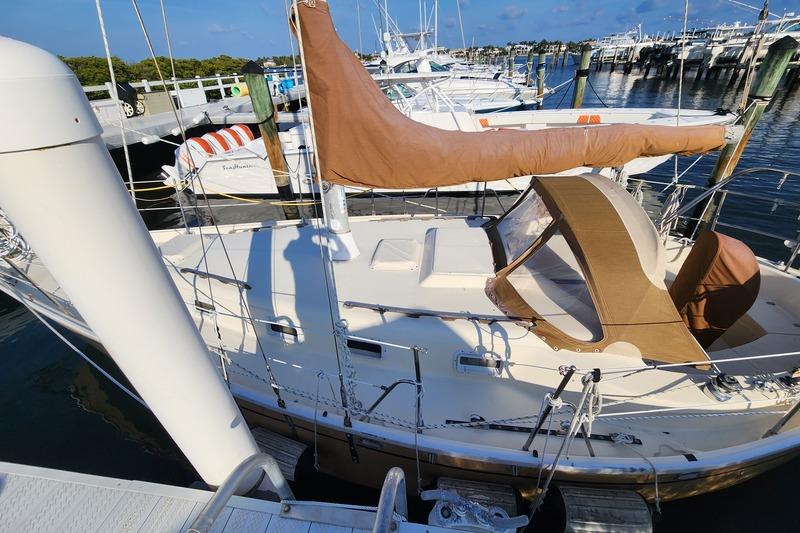 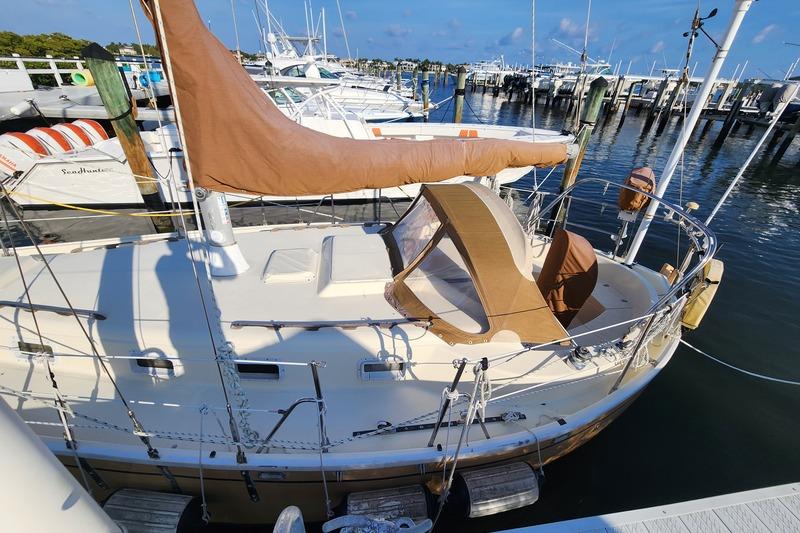 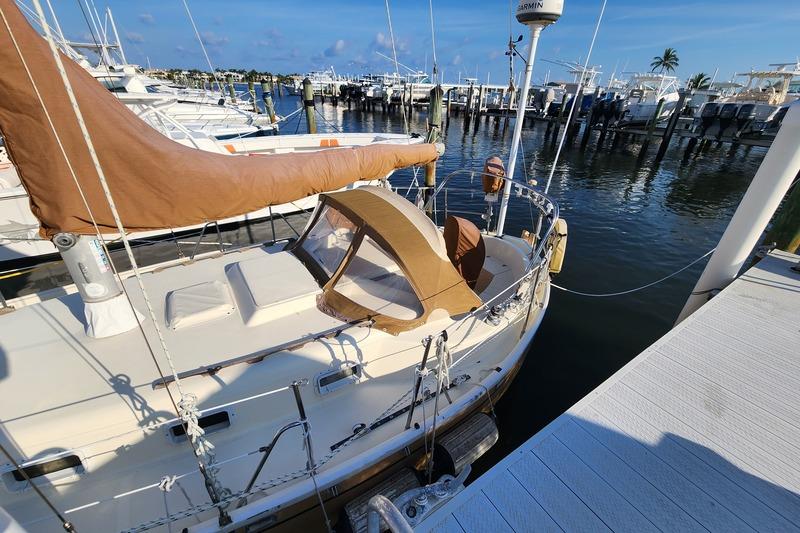 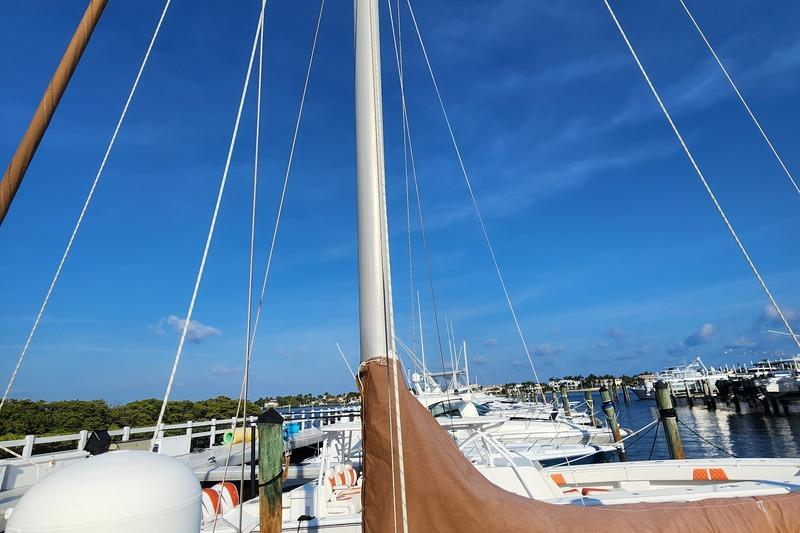 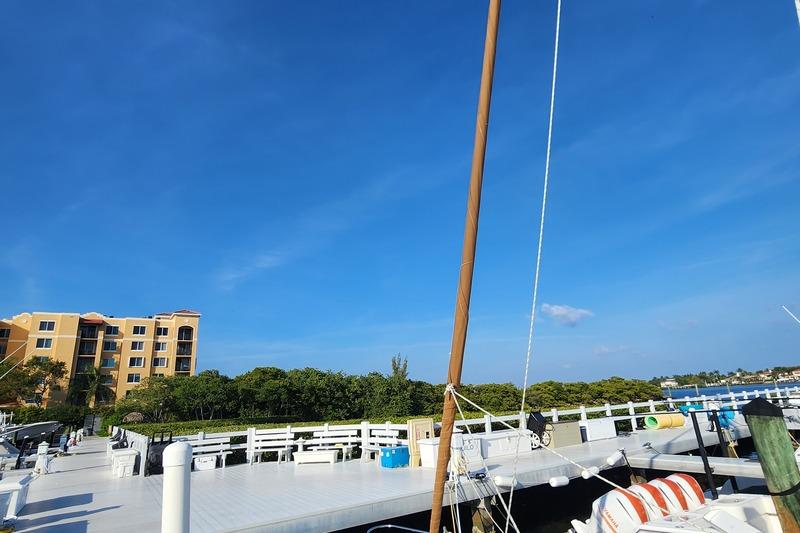 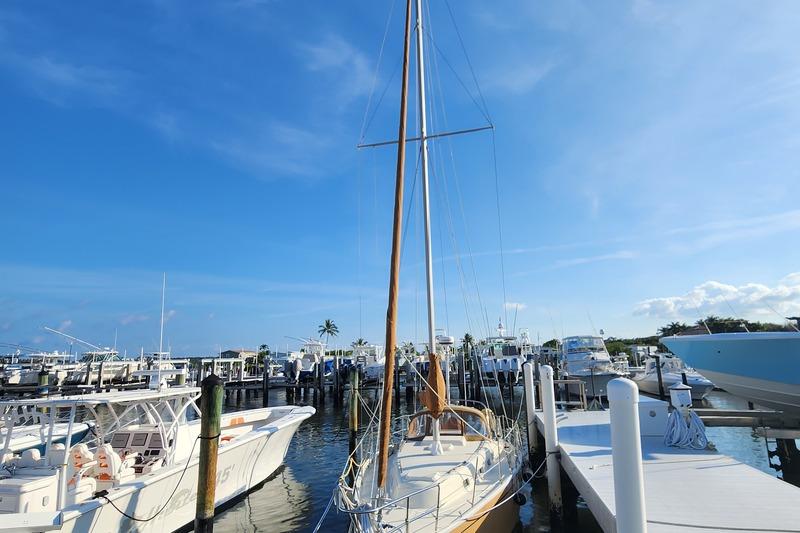 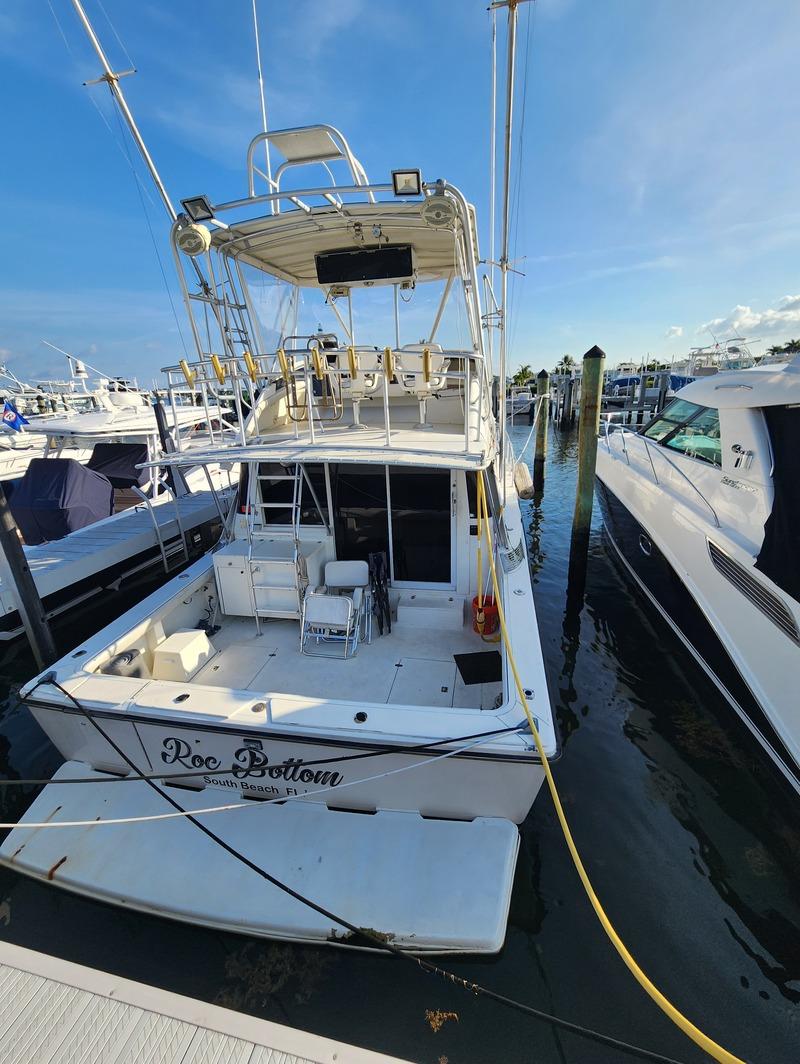 Most boaters enjoy a wide range of activities — with and without the engine on — and many are demanding a boat that is as flexible as their whims. Scarab’s new 255 Open ID is the poster boy for versatility. Americans love their vehicles, so it’s no surprise they found a way to incorporate them into a social activity when the engine is off. Previously, tailgating was a land-based activity, but last year Scarab unveiled the 195 Open, which proved tailgating could be a watersport too. This year, the flagship of Scarab’s lineup, the 255 Open ID, received an addition and became the latest boat to offer its innovative tailgate feature. Just flip the twin bolt-style latches, let go, and the entire transom drops down and opens up the rear of the boat.

When we tested the 195 Open last year, the only design issue with the tailgate was users had to raise it to access the boarding ladder on the smallish, integrated swim platform. This year there is a boarding ladder option ($563) that can be affixed to the tailgate’s grab handle, for use when it’s open.

The tailgate is padded with Marine Mat, for comfort and better traction, and it’s on the sides, where it serves as bolsters, and snap-in sections of it on the deck make it a barefooter’s paradise. But Scarab takes this rubbery padding someplace we have never seen anyone use it: outside the boat. The Impact Graphic option ($513) includes a stylish Marine Mat accent panel on the hull side that features hexagonal sections and the embossed Scarab name. It looks cool and acts as a permanently deployed fender that protects the boat from dock rash. The stern sunpad transforms into a social zone thanks to cleverly designed removable seatbacks that can be flipped fore and aft or removed entirely to allow sunbathers to fully stretch out. Facing forward, they become the seatbacks for the cockpit’s stern bench seat, but there are four of them, so passengers can configure them individually. The full-width sunpad has two cushions on the port side that can flip over and create a walkthrough that keeps guests off the upholstery. Scarab boats use Rotax jet-propulsed engines from Bombardier Recreational Products. The propless propulsion scheme is ideal for activities such as watersports and adds an additional safety factor to boating. Scarab offers three versions of the three-cylinder 4-TEC platform, which all have a 1.5L displacement. The 150 ECT is a normally aspirated engine; the other two feature superchargers with intercoolers. The difference between the 200 ECT and 250 ECT versions is that the more powerful model has an external intercooler, which makes it more efficient but also requires high-test gas to achieve peak performance. All three engine options feature closed cooling systems, so they are more saltwater friendly than engines that use raw water for cooling. We tested the 255 Open ID with its max power, twin 250 ECT engines, and were wowed by its performance. The superchargers bring the power on fast but not too abruptly for towing skiers. Even though the 255 features a hull with 20 degrees of deadrise, it experienced less-than-expected bowrise, probably owing to the engines’ light weight (Rotax doesn’t publish the exact weight). It reached plane in 2.4 seconds and hit 30 mph in just four seconds. Top speed was 54.3 mph. With twin 150s, top speed would likely be in the low to mid-40s.

Scarab designers were probably smart to allow the driver to control both engines with only one drive-by-wire power-and-shift lever. Owners crossing over from an outboard- or sterndrive-powered boat can find jet handling a little tricky at first, and having two power levers greatly complicates things. For better low-speed handling Scarab uses Lateral Thrust Control, which directs some of the thrust out of the sides of the bucket. Unlike “regular” boats, operators can jam it in reverse if they have to stop quickly (warn everyone first).

As mentioned, the hull has 20 degrees of deadrise, which we found helpful in choppy conditions on test day in Cadillac, Mich., in blustery conditions. The 255’s substantial 25-foot hull weighs 3,800 pounds, which helps it get a more Cadillac-like ride, if you’ll pardon the expression. With twin 250s, the speed doesn’t bleed off in moderately hard turns. And while it does lean in and carve a really hard turn, it can’t pull off the super-sick turns a smaller jet boat can. The 255 Open ID is up for pretty much anything. The standard tower with a Bimini top features a high tow point that’s favored by wakeboarders, and buyers can trick it out with some extras. Scarab’s Surf Stream Wake Enhancement System ($1,300) uses a pair of scoops to strategically direct water into the wake, which cleans up the face and enhances the size. Unlike the 255 ID (no Open), the 1,150-pound Wake Blast Ballast system is not available on the 255 Open ID but even without ballast, it plowed up a well-formed wakeboard wake. A must-have option is the Digital Speed Control Package ($880), which includes three excellent modes: Skiing Mode controls the rate of acceleration and terminal speed, Eco Mode stretches fuel economy, and Docking Mode delivers low-speed handling. The 255 Open ID’s center console design is well suited to fishing, and the low-profile Rotax engines and the Tailgate provide a huge amount of open space for fishing, with the cushions removed and stowed. Likewise, with the optional bow cushions stowed there’s plenty of room for casting. An optional Fishing Package ($2,000) includes twin pedestal fishing chairs, a livewell, rod holders in the T-top, gunwale storage and a stainless steel wheel at the helm. The console itself is large, and our boat was equipped with the Touch Screen Command Center ($3,667), which allows the driver to control everything on the boat. There’s plenty of room for a large fishfinder display ($1,567), and the console lifts up in front to reveal a huge area for use as a head compartment or for storing all those cushions I mentioned. A pumpout head is a $313 option. The driver has a dropdown seat bottom, for driving while standing, and is flanked by two leaning post seats. All three are protected by the tall real-glass windshield. Scarab gets buyers off to a good start with a standard twin-axle trailer and a Bluetooth stereo. Bump up the entertainment quotient with a side-mounted cockpit table ($413) and a cockpit cooler ($233). The Premium Sound system ($2,100) is a must-have and includes a Sony stereo head, Kicker speakers in the cockpit and transom, and a Kicker subwoofer with a dedicated amp. A lighting package includes dock lights and underwater lighting, for $433. The 255 Open ID comes standard with a choice of five bold gelcoat colors, but two-tone Impulse gelcoat ($833) and graphics are options. We were surprised it didn’t have a full canvas cover option, so we had one custom-made.

My wife and I have been boating before on other people’s boats, but we really wanted one of our own. I started looking at aluminum fishing boats, but they were too small. Plus, while I like to fish, I didn’t want a boat that was just a fishing boat. When we saw the Scarab it really fit the bill. A boating friend of ours told us we would probably spend a lot of our time anchored around the many islands and coves on Lake Texoma, and the Scarab is designed with this in mind. We got the optional stereo and added coffee-can speakers to the tower. We spend most of the time just cruising but like the fact we can take the cushions off and transform it into a fishing boat. We haven’t done watersports yet, but we might get into wakeboarding and surfing this summer. Bob at MarineMax didn’t put any pressure on us. I am an engineer, so I had a lot of technical questions for him, and he patiently answered them all. I was really picky when the boat was delivered, and MarineMax took care of all the issues we had quickly.