The 2386 DT exemplifies Sweetwater's expansion into a more luxurious neighborhood. 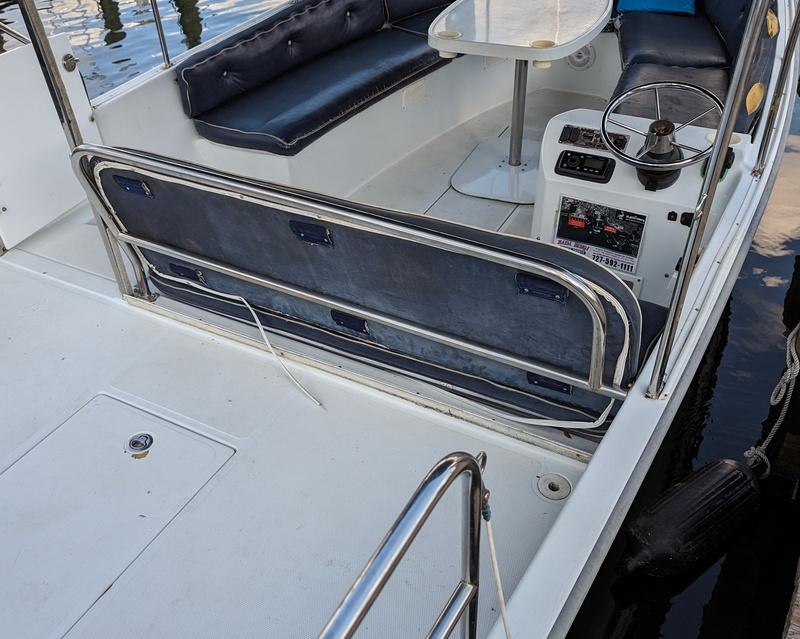 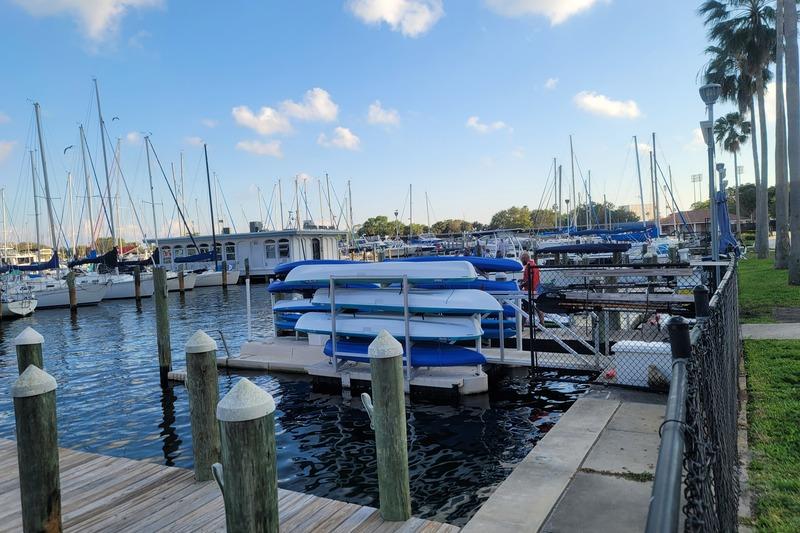 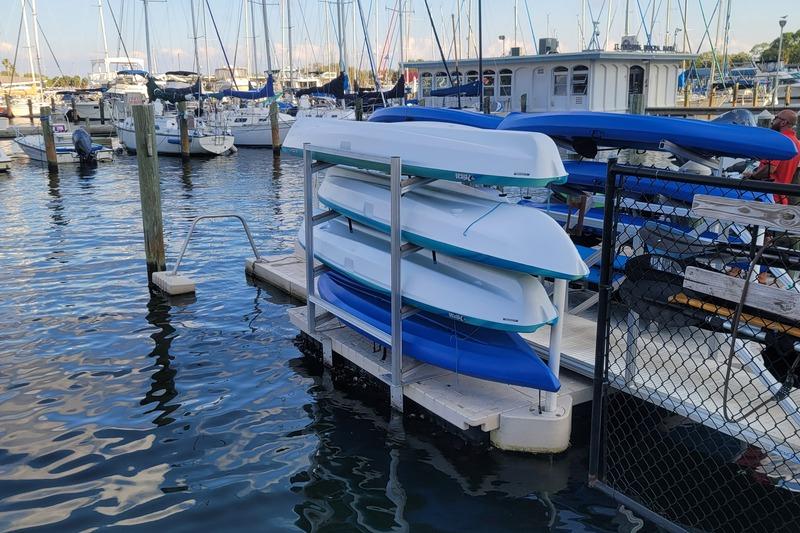 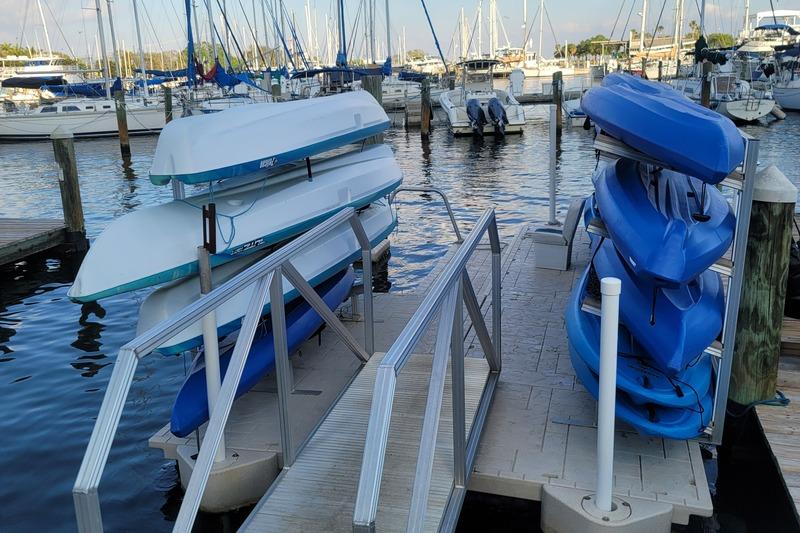 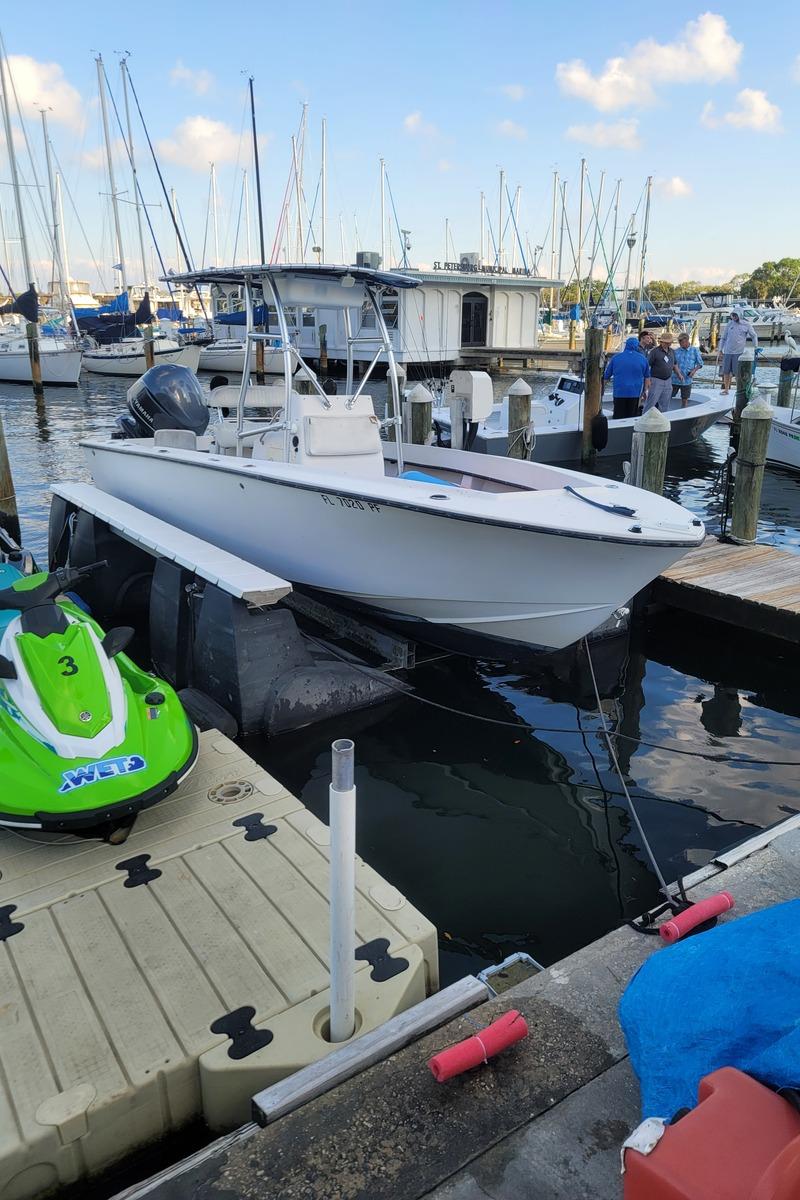 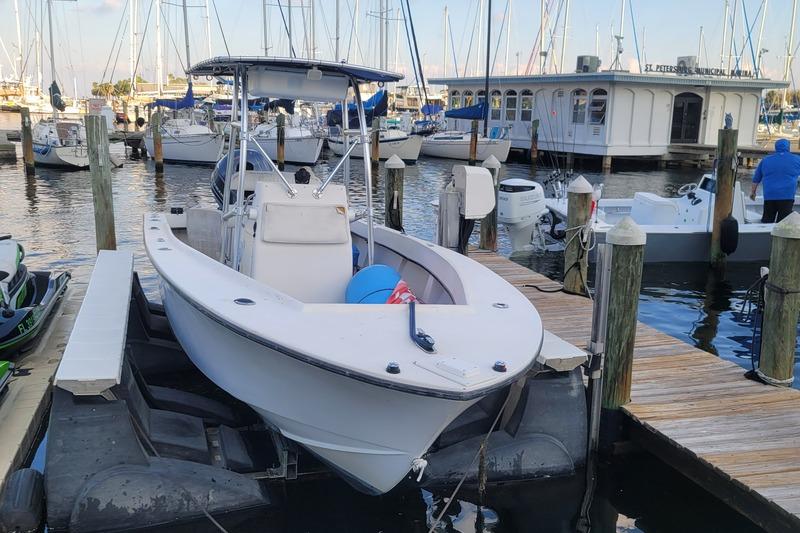 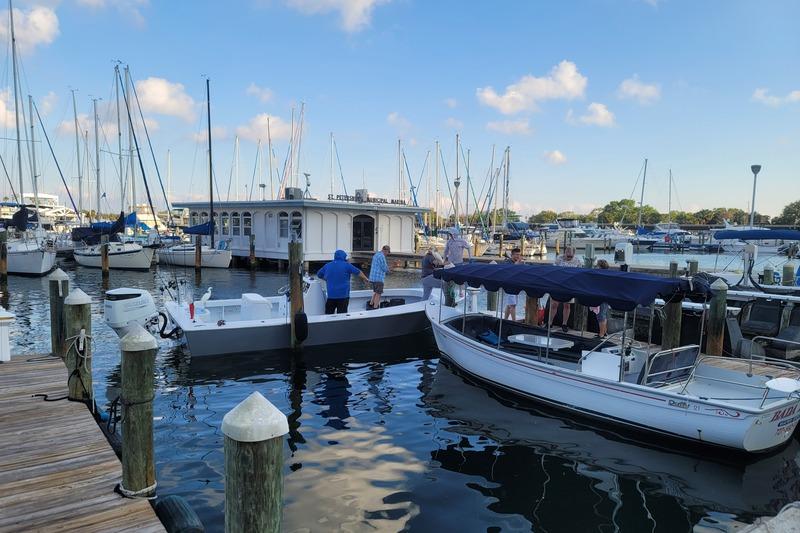 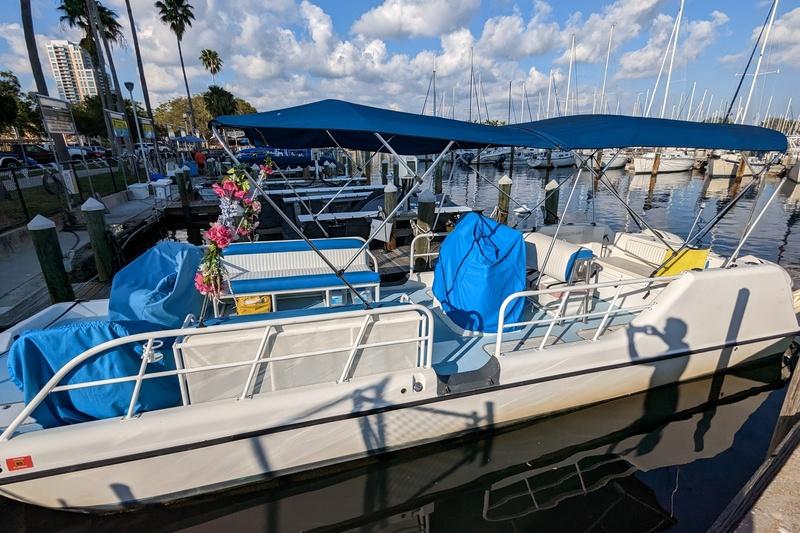 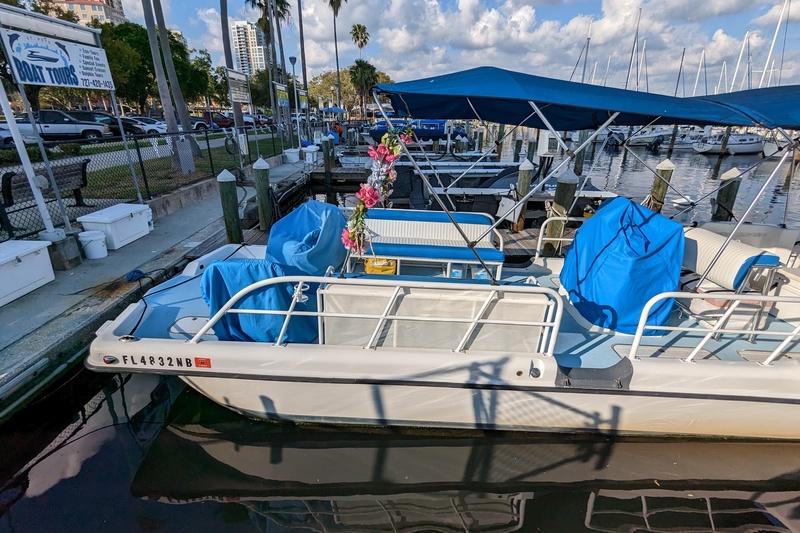 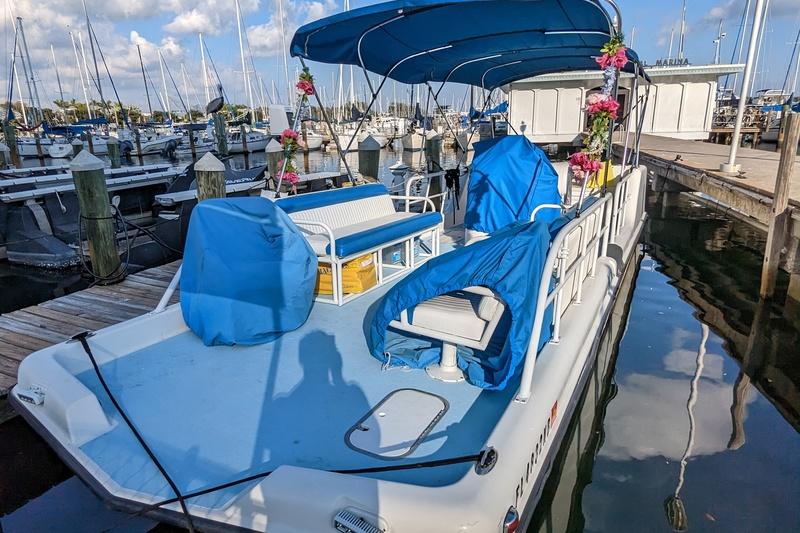 In the Godfrey pontoon hierarchy, Sweetwater has historically been the least expensive line, and in the past it showed. Compared to the high-end Sanpan models, a Sweetwater looked less luxurious. But for 2018, the builder ramped up the luxe level — models such as the 2386 DT look downright elegant but maintain a budget-friendly bottom line — and expanded the line to include many new floor plans, so matching layout to lifestyle has never been easier.

UNIQUE FACTOR
The DT in model name 2386 DT stands for dinette table, and while Sweetwater has offered them before, they’ve been nothing like this one. The large, rectangular table is sturdily supported by twin pedestals, so stability won’t be an issue. But what about storing it, which on a pontoon can be problematic? Sweetwater designers solved this problem by adding a specialized compartment behind the rearmost bench seat. And clamps hold the legs securely underneath the table to reduce clanking. Once the table is removed, another clever innovation can be revealed: a double-duty module that saves cockpit space. For dining, it forms twin facing benches with flip-flop seatbacks that can seat four adults. For tanning, just flip the seatbacks toward the middle to form a sunpad with plenty of acreage. This floor plan doesn’t need a static stern sunpad like on many other models. PERFORMANCE
Not many pontoon boats offer consumers as wide a variety of engine choices as the Sweetwater 2386 DT, since it can be rigged with any major outboard, 20- or 25-inch shaft, from 50 to 200 hp. I counted 147 in all. The base boat comes with twin 23-inch pontoons and is priced at $32,260 with Yamaha’s T50, which is fine for owners on a really small body of water who aren’t into watersports. But boaters who have a more active lifestyle and want to feel their hair actually move need more. The first step to great performance is to get the 25-inch Triple Tube Package, which increases the bottom line by $3,867 but is necessary to get the most out of this model.

Our test boat had maximum power in the form of a Yamaha F200XCA, which is the 25-inch version. The 20-inch shaft (F200LCA) saves $1,107, but having the powerhead higher off the water, especially in salt water, is well worth the extra expense. Using the max power by Yamaha, the 2386 DT got on plane in 2.5 seconds, reached 30 mph in 7.7 seconds and topped out at 43 mph. HANDLING
Our test 2386 DT had the Triple Tube Package, which includes an aluminum underskin, inside skirting, lifting strakes, heavy-duty channels, a GPS speedometer and a third tube with a Launch Pad for quicker planing. Boat owners who tend to carry close to the maximum of 11 passengers or do their pontooning on a large body of water should check out the 27-inch-tube package. It costs only $427 more, noticeably raises the deck off the water for better seakeeping, gives it a four-wheel drive feel and carries 45 gallons of fuel, 10 more than the 25-inchers.

The triple tubes have lifting strakes on both sides of the center tube and on the inside of the outside tubes, which is the most common configuration. The combo allows it to lean in during hard turns and still ride on top rather than plow through the water. BEST USES
With the Triple Tube Package, the 2386 DT makes a good pontoon for watersports, especially with a ski tow ($367) or a TurboSwing Giant engine hoop ($1,234). Buyers can upgrade the boarding ladder to stainless steel for $220, but Sweetwater offers a black Easy Climb ladder ($167) that, like its name suggests, makes the extraction process a slice of Bavarian chocolate thanks to large, angled steps and fat grabrails.

Fishing becomes a viable activity with a few options, including a $200 livewell and a $760 Simrad G05 XSE that has a 5-inch touchscreen and can be flush-mounted in the center of the dash. The second captain’s chair is a decent portside fishing spot, but if angling is a primary passion, a better model option would be the 2386 CC, which has a center console and fishing seats in all corners. Although it can handle just about anything, the 2386 is optimized for entertaining and cruising. At 23 feet, 9 inches long, it has plenty of seating on twin bow chaise lounges and aft dinette seats. During parties, most people stand, and the 2386 has lots of wide-open spaces thanks to an abbreviated wash-up and food-prep station behind the captain’s chair. Abbreviated fore and aft outside-the-fence decks help maximize interior space.

An entertainment center upgrade ($2,374) amps up the hospitality quotient and adds a built-in grill for wowing guests with freshly cooked food. For more food display area in the bow, a portable cooler table is a $634 option, or a dinette table up front is $380. The upgraded stereo doubles the speakers to a four-speaker Turn It Up II Polk system, for $467, but buyers who want to add a subwoofer will have to go to the aftermarket. PREFERRED SETUP
Sweetwater offers a huge number of options that will push the 2386 DT solidly into the luxury pontoon boat ranks. There are a whopping 13 upholstery options, and our boat had the top-of-the-line Sahara Tan Surluxe Pillowtop ($3,867). It had Black Cherry accents, which matched the new fencing color of the same name. Sweetwater has moved away from carpet and instead offers a choice of 15 vinyl flooring material options that range from a pair of standard choices to more deluxe woven alternatives that cost up to $1,527. Our boat had the Metro Tannery choice, which was an extra $847.

The helm is all new for 2018 and features an all-fiberglass design with an angled footrest and expansive dash. Our boat had the upgraded Evolution captain’s chair ($500) and tilt wheel ($80), which helped give it a more luxurious feel. A useful option is a changing room ($380) that can be equipped with a portable toilet for $140. An in-floor compartment ($1,147) is perfect for storing skis and tubes, and for quick rinses there’s a hose up front ($367) set into the recessed kickplate. Often, a bow filler cushion can get in the way of boarding, but the shortish bow deck on the 2386 probably won’t get used as frequently as the port gate, so adding the sectional ($487) is a great way to expand seating capacity.

We would like a large trash can somewhere on the boat that is readily accessible.

My husband, Kelly, and I operate Cool Beans Cruises (coolbeanscruises.com) and we bought the Sweetwater to take out small groups in the waters between Naples and Marco Island. Most of our cruises are for sightseeing, to see the abundant wildlife such as dolphins, manatees and birds on the southwest coast of Florida, but we also like to pull up on sandbars such as Sand Dollar Island for some world-class shelling.

Although we have larger catamarans for bigger charters, the Sweetwater 2386 RT is the perfect size for smaller, more intimate charters where we restaurant hop to places such as the Snook Inn on Marco Island. We really love its comfort and roominess in addition to the smooth ride. Jeremy at The Boat House was very professional during the buying process. He answered all our questions promptly and put no pressure on us. We will definitely buy our next boat there.