For 2018, Sylvan resets the bar for pontoon luxury with its all-new M-Series. 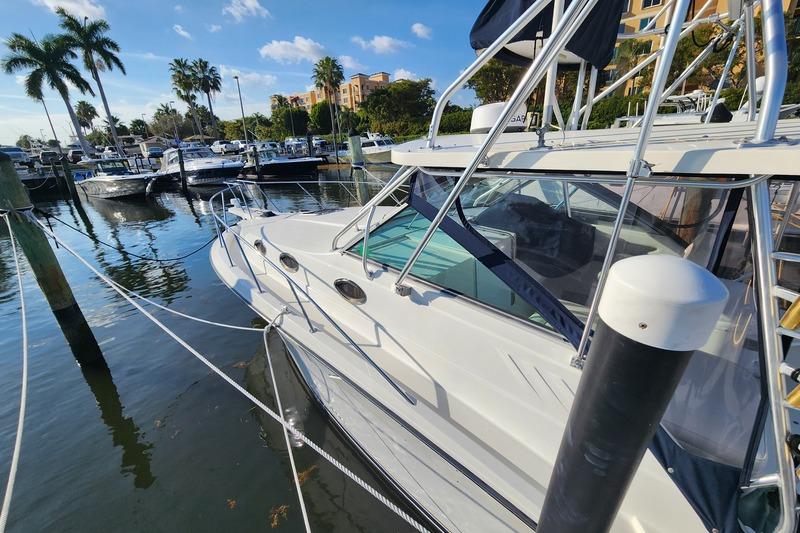 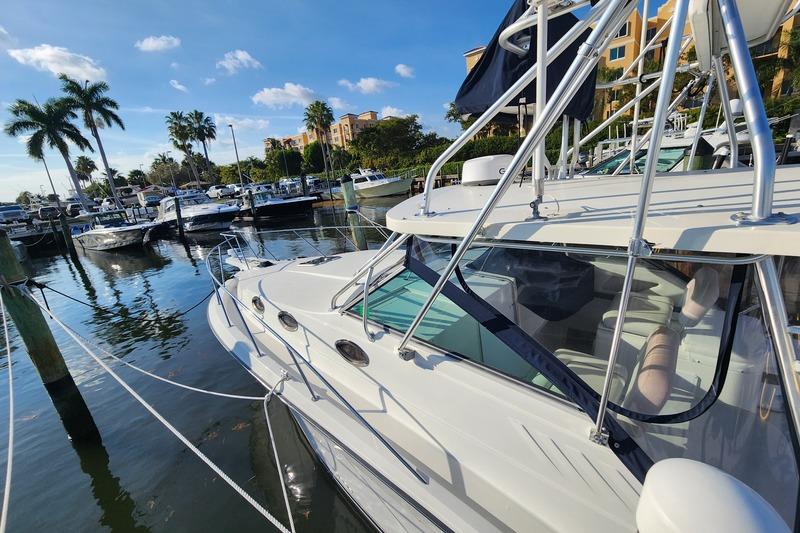 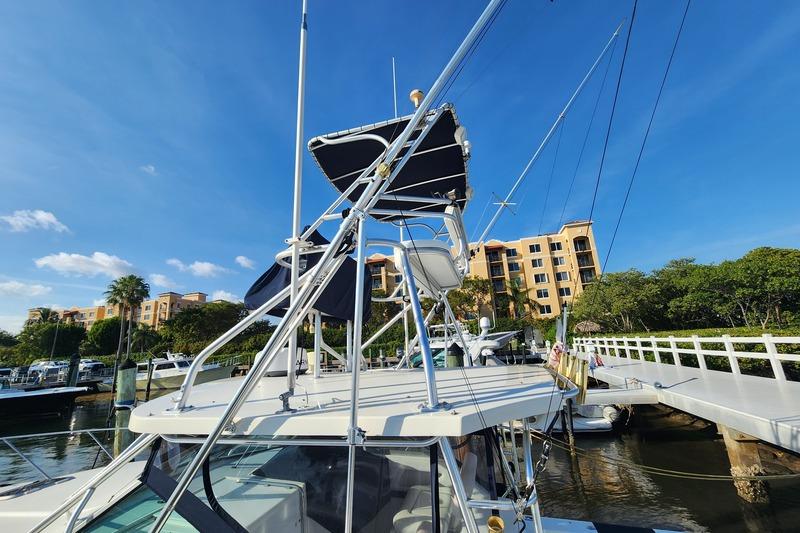 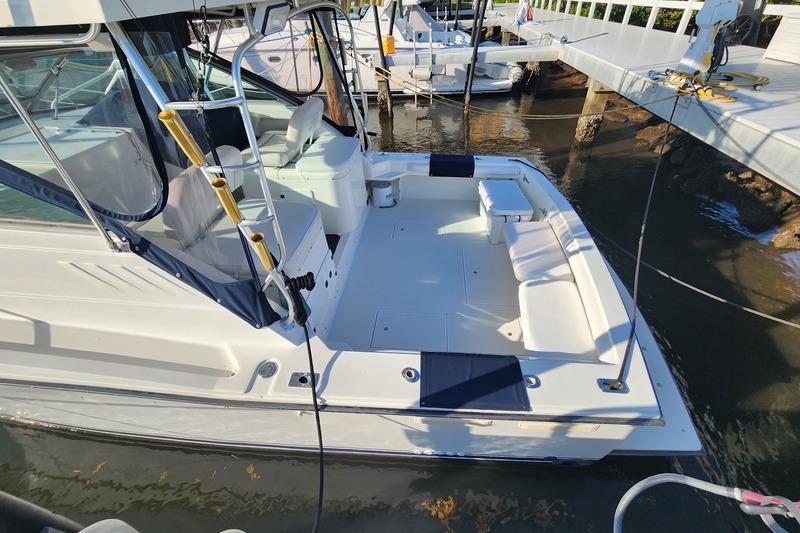 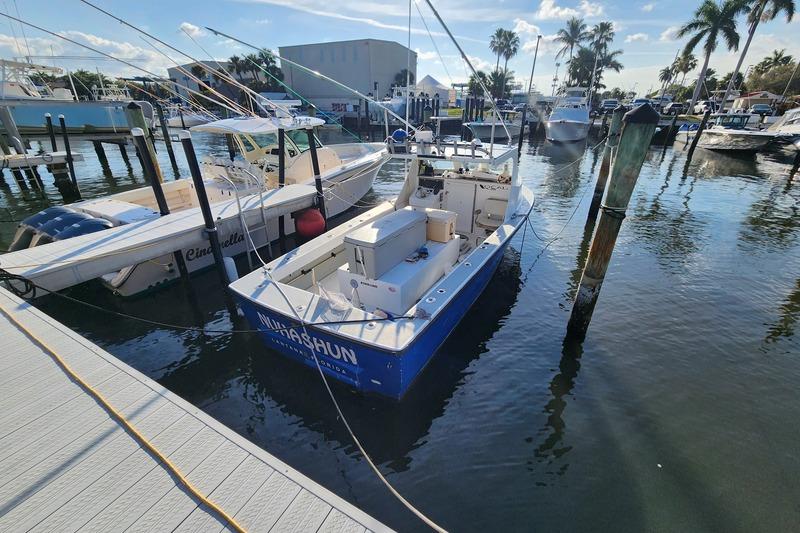 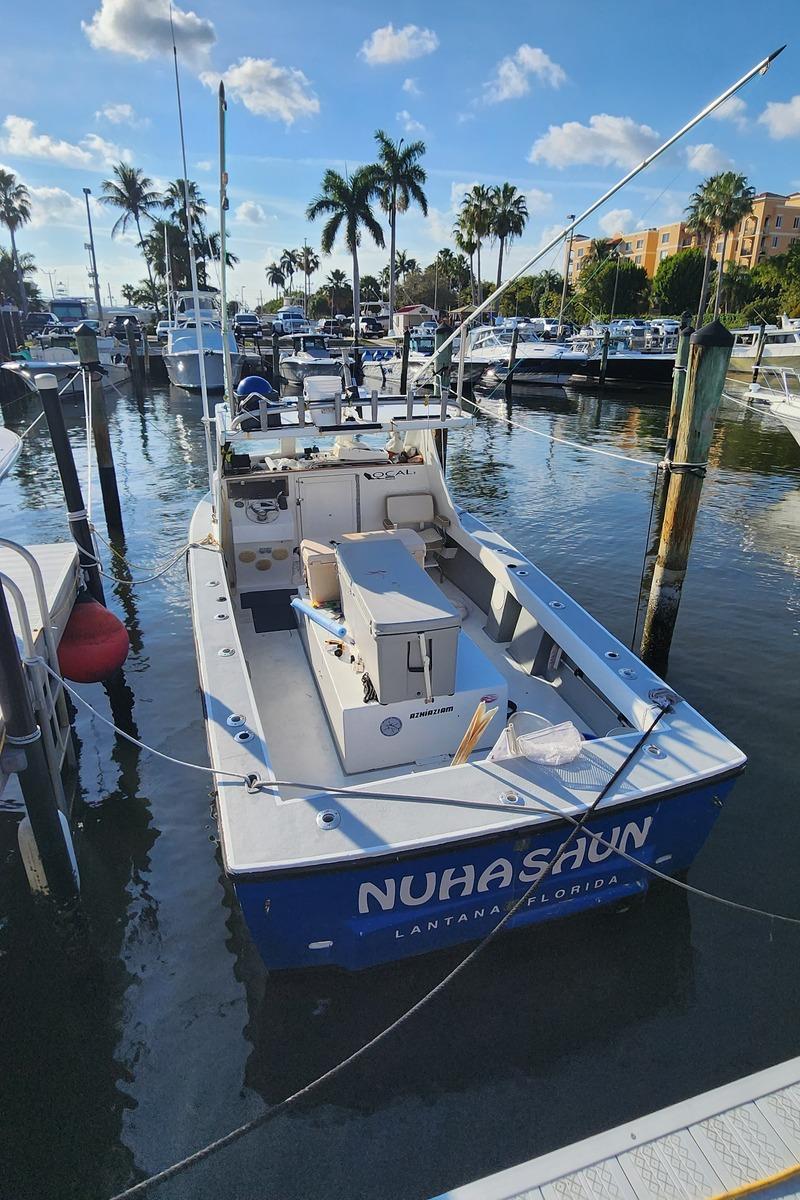 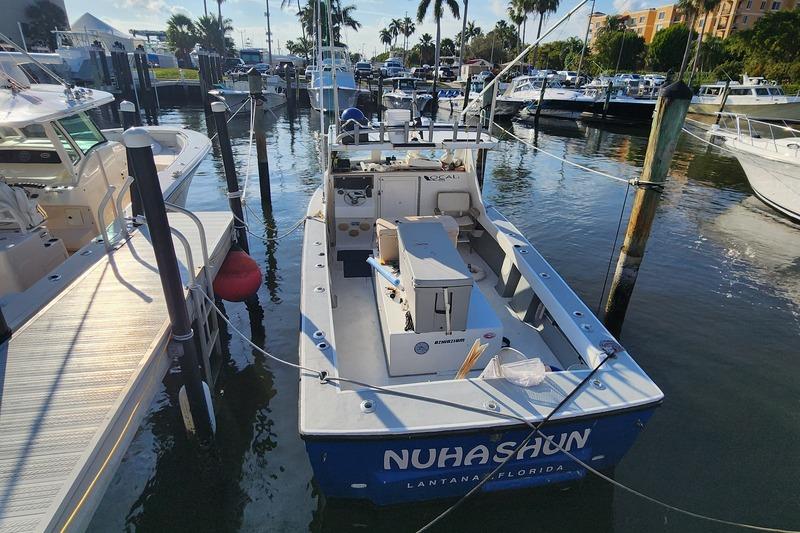 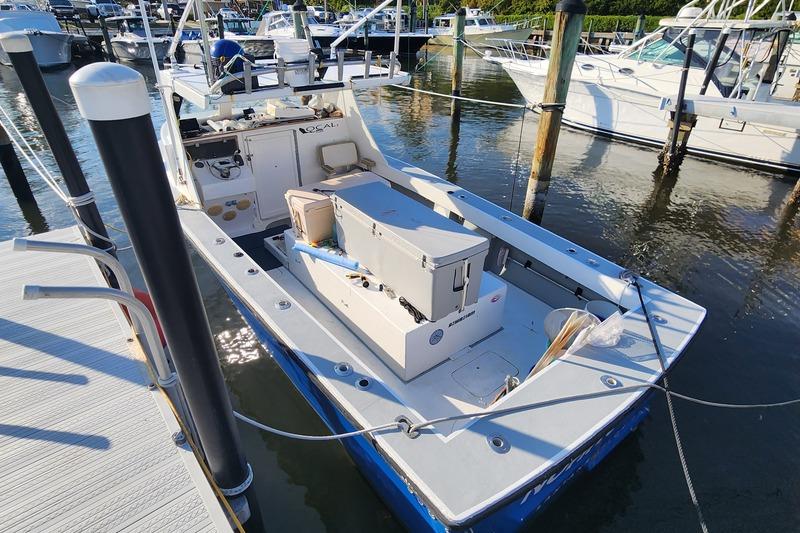 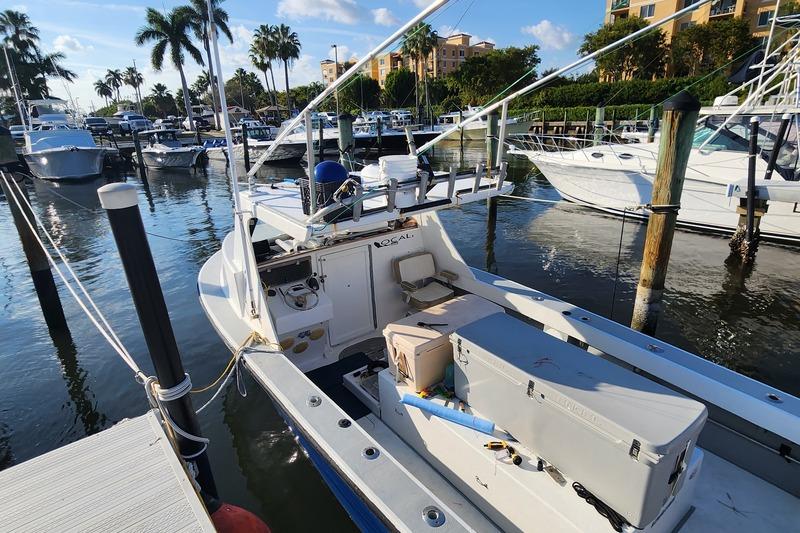 It takes guts for a company to scrap its top-end pontoon line and replace it with something entirely new, but that’s exactly what the designers at Sylvan did. And the M5 LZ DC is strong evidence they’re onto something big.

It didn’t take long for Mike Farmer, Sylvan’s newest design engineer, to make his mark. He led the team that created the all-new M-Series, which takes the mantle as Sylvan’s highest luxury line from the Mandalay series, which is no more. Its flagship is the M5 LZ DC, a “blank screen” model for 2018 that is unlike anything we’ve seen. It features a new vibe Sylvan calls a “Yacht-Toon” and takes the high end of Sylvan to a new place.

The Arctic Trim package, which our test boat had, uses white pearl metallic paint on the sculpted fiberglass panels at the corners and a slanted, contrasting dark center aluminum panel. A painted top rail keeps the fiberglass look flowing throughout the boat’s length. At the bow, the fiberglass gate, backed on the inside with vinyl, has exterior horizontal metal accents that resemble the grill of a luxury car. Even the tubes are painted, to help tie the new look into a cohesive package.

The four-inch raised helm features a wraparound dash design that wouldn’t look out of place on a starship. A newly designed low-profile windshield at each of the dual consoles scores high in originality with a heavy black frame and unusual wraparound shape. Positioned front and center at the dash is the standard Simrad NSS 7 display with a Total Scan transducer for navigation and a better look at what’s below. It can interface with the engine and simulate up to eight gauges on its screen. It’s flanked by a pair of Yamaha multifunction gauges that keep the driver informed of all engine parameters and state of trim. Flush-mounted push buttons for boat accessories keep the look clean and modern. Most pontoons designed for entertaining have a snack- and beverage-creation zone that often eats up valuable interior real estate, but Sylvan’s new Lounge Arm Galley solves that problem with a f lip-up galley located on the back of the portside rear recliner. Deploying it involves pulling the lounge’s facing panel out and pulling up on the
stainless steel grab handle to flip it into place. In just two seconds, a faux-granite countertop is revealed. It includes cupholders, a bottle opener and a stainless steel sink with a spigot.

Propelling our test boat was Yamaha’s F300, this pontoon’s maximum power. Sylvan makes sure everyone experiences high performance by making its triple-tube SPX PR25 setup standard. Lifting strakes on both sides of the center tube and on the inside of the outer tubes generate plenty of lift. The center tube is positioned farther back to create a motor mount for the Yamaha 4.2L F300. When I jammed the throttle on this beefy 4,100-pound, near-27-footer, the M5 rose on plane in three seconds with virtually no bowrise. The Yamaha is the lightest 300 in the industry, at 562 pounds, thanks to innovations such as plasma-fused sleeveless cylinder walls that are 60 percent harder than steel. It features a variable camshaft timing system that not only aids it out of the hole but also in the mid-range, as evidenced by the M5’s time to 30 mph: 7.7 seconds. This pontoon likes a lot of trim, and we were able to get more than half of the tubes’ length out of the water, which helped it achieve a top speed of 42.2 mph at 6000 rpm. A 60-gallon fuel tank provides the range to roam far. Sylvan can also power the M5 with an Evinrude or
Mercury engine.

While the Yamaha F300 is available with mechanical shift and throttle, Sylvan includes drive-by-wire throttle controls, plus the power steering system, as a standard feature. Maneuvering the Sylvan around the narrow channel at the Patona Bay Marina and Resort on Lake Tippecanoe in northern Indiana, I noticed a distinct lack of clunking from the gears during shifting, a noise that is often amplified by pontoon boats’ aluminum architecture. The quietude is owed to Yamaha’s Shift Dampener System (SDS), which uses a uniquely designed rubber hub to cushion gear engagement. Pontoons can be tricky to dock because of portside fencing that obscures the dock from a driver’s field of vision. So Sylvan offers an optional camera ($1,152) for help with docking, whose feed is displayed on the Simrad screen.

The absence of lifting strakes on the outside of the outer tubes allows the M5 to lean inward during hard turns. And as I cranked the eight-spoke Rondinella wheel by Gussi, the radius of our turn kept shrinking until the wheel reached its stop, and the prop never lost its grip.

One of the primary missions for the M5 LZ DC, as evidenced by its impressive standard Kicker KMC-20 Bluetooth stereo system, is entertainment. Our boat was musically maxed thanks to the WetSounds upgrade ($1,104), which includes eight interior speakers, a subwoofer and two speakers that face aft. Buyers can add twin coffee-can speakers to the watersports tower. A unique cockpit table that matches the styling of the boat features cupholders and a nonskid top that prevents plates from sliding. The addition of the Sport Arch ($14,930) takes the pontoon’s watersports chops to the next level by providing the high tow point wakeboarders favor. The forward-slanting tower is made of aluminum and is powder-coated white (which matched the Arctic color scheme of our test boat). It features a large Bimini top for shade. A Bimini top is standard on boats without an arch. On the roomy back deck is a standard forward-swept stainless steel ski-tow cage that’s well-braced and would be favored by slalom skiers and tubers. A centerline ski locker can hold all the watersports toys.

The M5 LZ DC is a lounger’s paradise. Layback lounges in all four corners feature indestructible Rotomolded frames, and the two-tone upholstery is soft but tough and is protected against damaging UV rays. When the key is off, another chaise lounge on the extended rear deck is fair game. The front deck is oversized and features Marine Mat nonskid, adding yet another place for guests, up to 14 of them, to board safely. The standard M5 LZ DC is a well-equipped premium pontoon that needs zero options and starts at $133,199 when it’s powered by the Yamaha F300. The standard package is loaded with features that are usually options, including an impressive lighting system that includes Babbito under-deck lighting, underwater lights, changeable-color LED lighting, concealed mood lighting and lit cupholders. It comes standard with 28-ounce carpeting,but our boat had snap-in Marine Mat ($2,235), which provides excellent grip
and makes cleanups hose-and-go easy. A less expensive option is snap-in woven Sea
Weave vinyl flooring, for $1,035.

The M5 can be customized with a power canopy or a double Bimini, for the ultimate in shade, and a complete or half-camper enclosure is available. Buyers can add a portable commode for $221. Sylvan’s exclusive Heavy Hat understructure provides stout construction that, combined with three-quarter-inch marine plywood, creates an earth-like deck. Sylvan’s Lifetime +6 Warranty includes a lifetime warranty on structural parts and six years on components such as carpeting, electronics and upholstery, including parts and labor. It’s transferable to the second owner, which keeps its resale value high.