The Ranger Tugs R-27 Outboard meets the standard for ardent cruisers but can do much more. 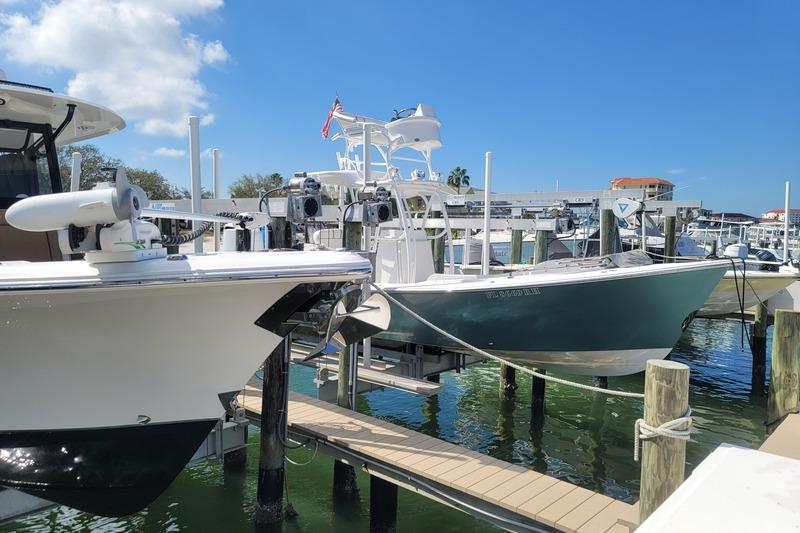 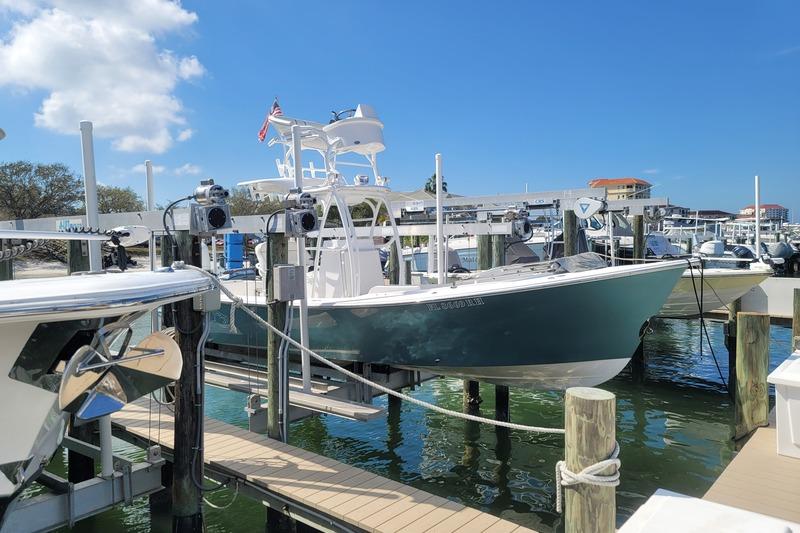 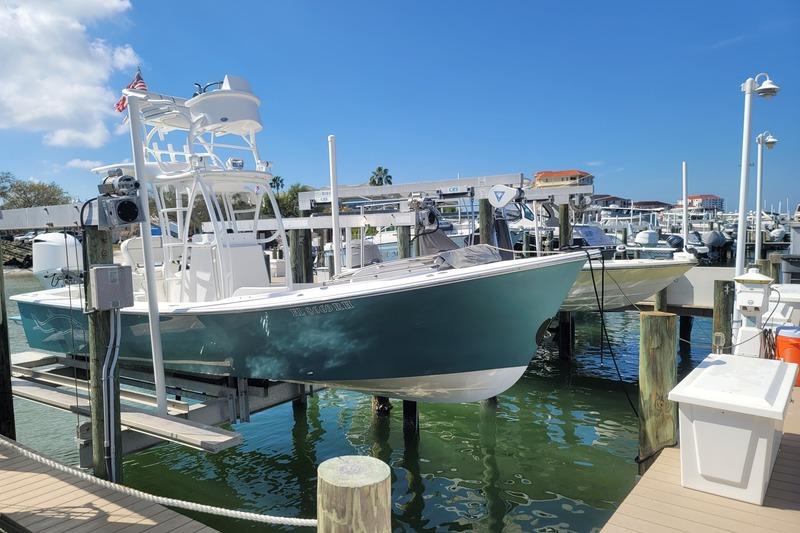 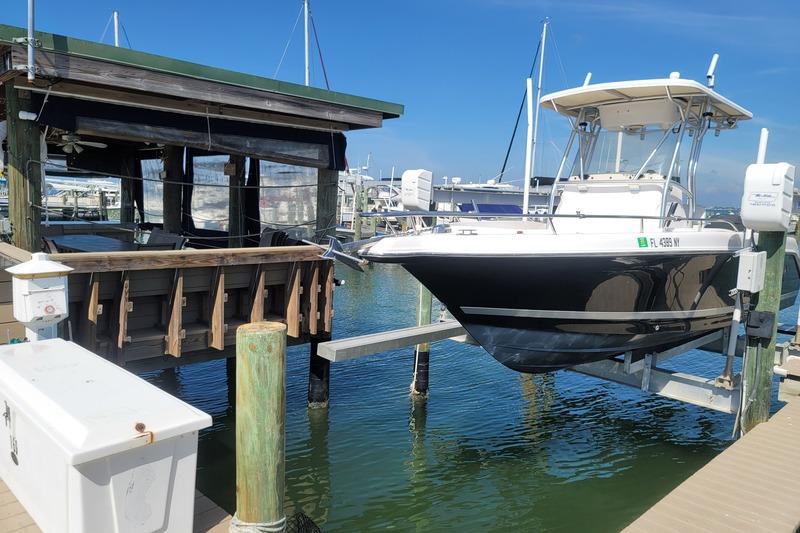 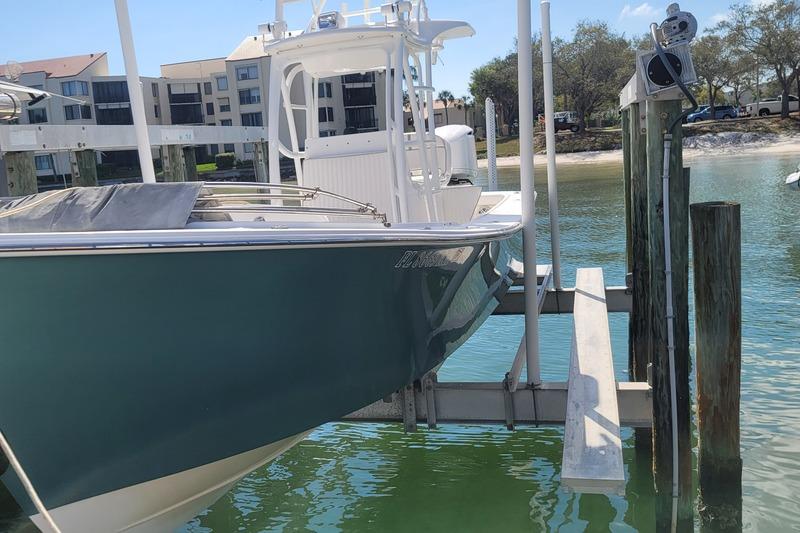 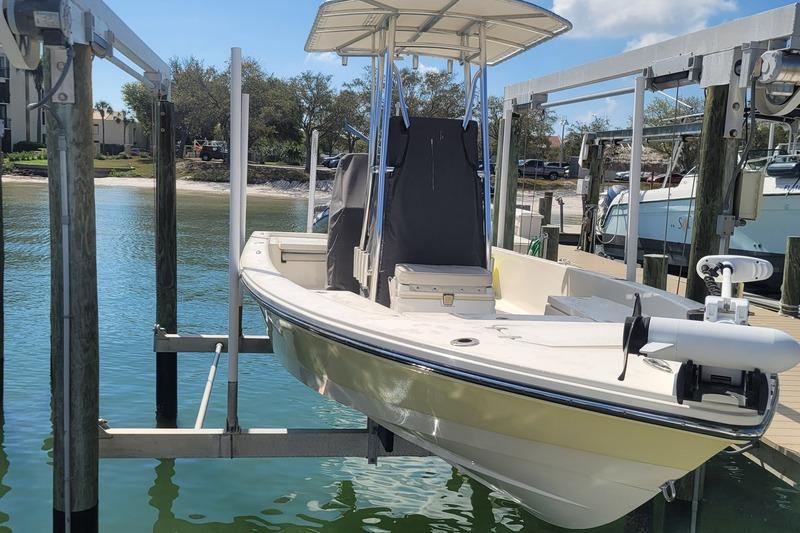 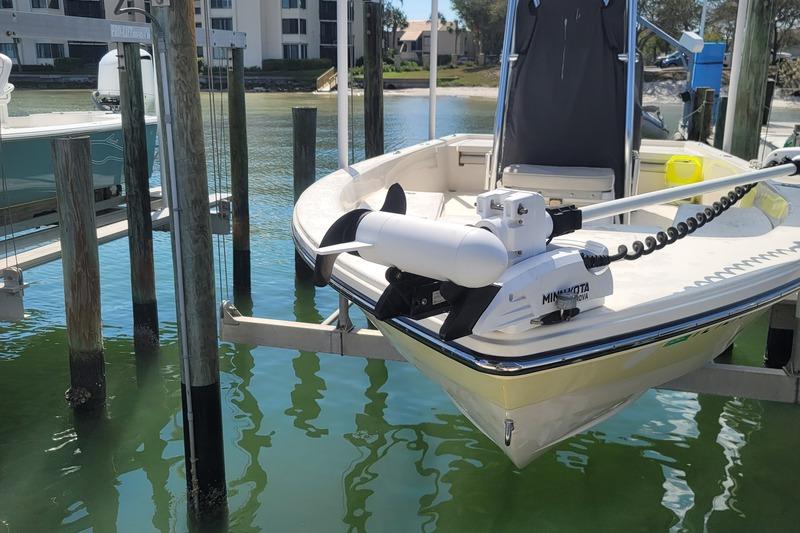 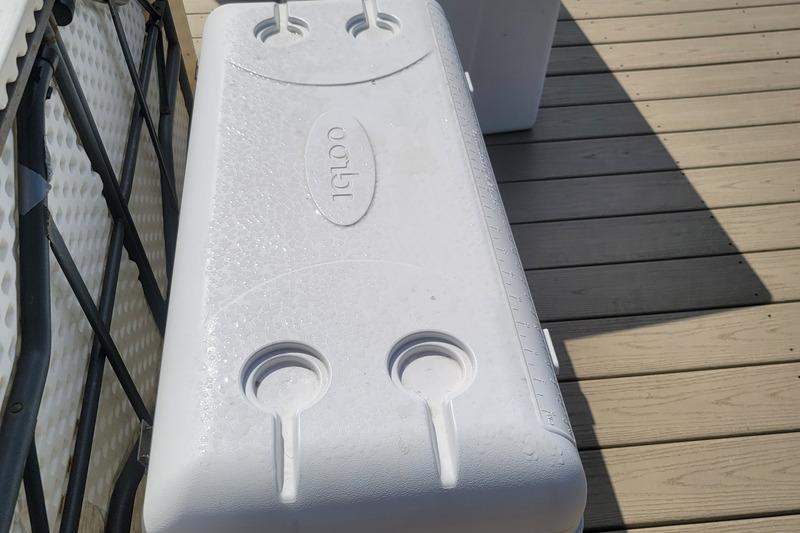 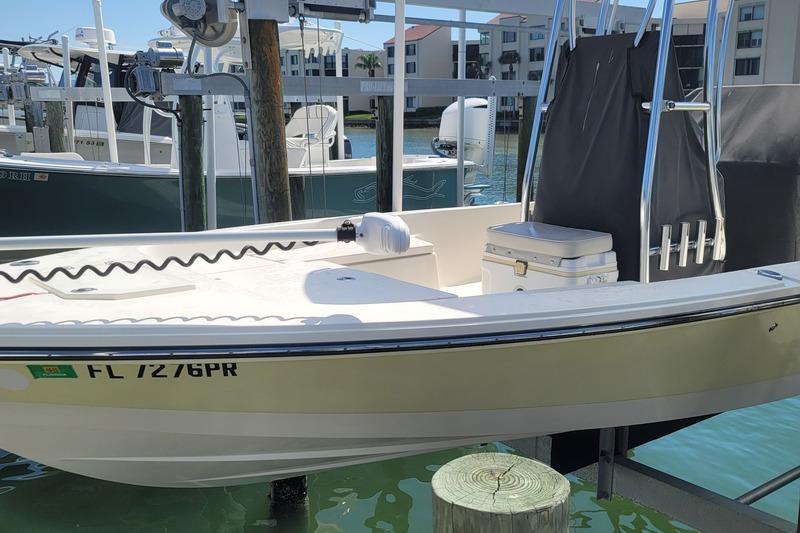 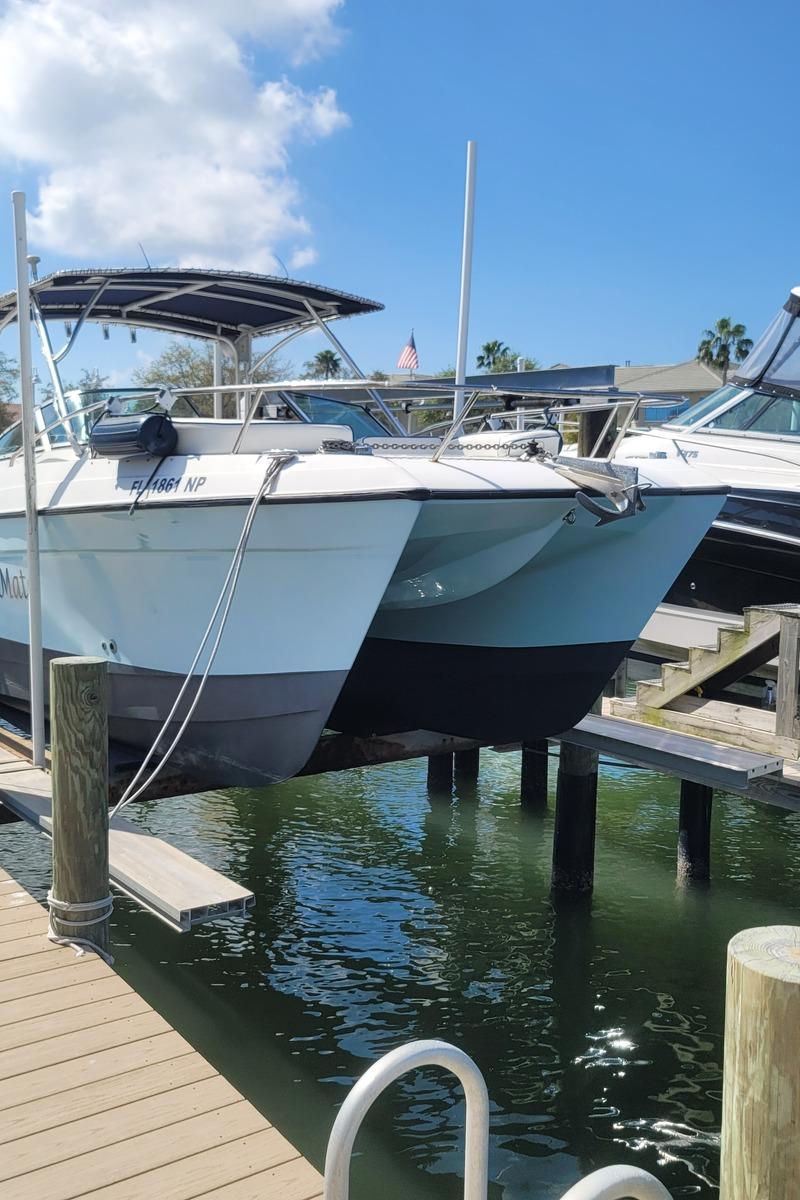 Most boaters have felt the urge to leave all their cares behind, jump in their boat and go cruising, and a tug/trawler-style vessel epitomizes this lifestyle. Then reality sinks in. Most boats of this ilk are heavy, slow and awkward to tow, which limits owners’ cruising options to locations adjacent to their backyard. Fantasy killer.

With the R-27, Ranger Tugs takes the classic tug-style boat and powers it with a Yamaha F300 outboard. Doing so transforms it into a go-anywhere, do-anything machine that fits the lifestyle of most recreational boaters.

The first things that jumped off the spec page at me were the Ranger Tugs R-27’s 8-foot, 6-inch beam and its 7,000-pound weight, which isn’t unduly heavy for a 27-foot hull that stretches to an overall length of 32 feet, 9 inches, including its expansive swim platform.

Owners can tow this pocket cruiser to any of the 49 continental states without acquiring wide load towing permits or jumping through any hoops, such as displaying flags or signs. And it can be towed by conventional vehicles, such as a Ford F-150, which can handle up to 13,200 pounds with its smallish 3.5L V-6 EcoBoost engine. This opens up all the famous cruising grounds, including the Inside Passage to Alaska or the Great Loop. Got cabin fever during a brutal Michigan winter? Hook up the Ranger Tugs R-27 and head to the Florida Keys or to Ft. Lauderdale for a quick hop to the Bahamas.

In the main cabin, the galley runs along the port side, opposite the dinette.

While one might think the relatively narrow beam would make for cramped quarters within the pilothouse’s salon (yacht-speak for the enclosed social area), the interior feels spacious. Of course something had to give, and in this case it’s the narrow perimeter walkaround. But Ranger Tugs found a workaround to this by bolting on a Starboard strip overhang that’s slightly canted inward to the walkway to provide sure footing. The combination of that strip, tall grabrails and a bowrail along the way provides a secure feeling during the transit forward. And on the bow is one of the boat’s coolest features, a tall doublewide lounge seat.

Passengers are sure to love the wind-in-their-hair bow bench.

Boats such as the classic Nordic Tug 26 are pure cruisers that feature diesel engines — a Volvo Penta D3 150, as one example — mated to a straight inboard, which vectors off some of its power due to the driveshaft angle. Combine this with a displacement hull and we have a boat that cruises at 9 mph and has a top speed of 11.5 mph, which is OK until the kids want to go tubing or a storm is approaching.

Ranger Tugs combines a planing hull with a Yamaha F300 — its only available engine — to create a boat with very un-tug–like performance. On plane in 6.4 seconds, the R-27 reached 30 mph in 10.8 seconds and hit a top speed of 40.3 mph during our sea trial (full tank of gas and three passengers). Yamaha technicians tested this boat with half a  tank and two passengers and reached 42.2 mph.

In order to find the best cruise speed, I usually start running an engine at 3500 rpm, note the speed and noise level, and then increase engine speed in 500 rpm increments. On this sea trial, something unusual happened. At 4000 rpm, the R-27 noodled along at 18 mph and the F300 got 1.5 mpg, according to the Yamaha gauges, but when the F300 hit 4500 rpm, it came to life. The boat streaked to 30.1 mph, and the engine cracked the 2 mpg barrier — exactly the same fuel economy it got at 2500 rpm when the R-27 was impersonating a displacement-hull tug at 10 mph. In other words, it’s telling owners to go for it!

This fuel economy and a generous 150-gallon fuel tank give the boat a range of 270 miles, after subtracting a 10 percent reserve. To really stretch the boat’s reach, 1000 rpm yields 4.33 mpg at 5.2 mph, according to Yamaha tests, which translates to a theoretical range of 585 miles.

At the helm, the driver holds on to a real wood wheel, which is part of an overall interior theme that highlights teak and veneers. Visibility within the enclosed cabin is excellent thanks to 360 degrees of glass that surround its occupants. I jammed the throttle with trim down and without using the standard Lenco trim tabs, and the R-27 just seemed to come up on plane with little bowrise or a defining moment when the bow dropped down. While cruising in the mid-30s, I spun the vertical wheel hard over and the boat carved a tight turn, though I did momentarily lose visibility because of the cockpit roof. To make docking easy, a bow thruster is standard.

On a boat where versatility is key, the helm bench seat converts to face aft and becomes part of the dinette.

The Ranger Tugs R-27 is fully equipped for cruising with a standard features list that includes a Garmin 8612 chartplotter with an xHD radar array, autopilot, a full galley, 140-amp solar panels and even AIS 300, which shows the position of both commercial and larger leisure boats, offering greater safety in limited visibility.

Many tugs and trawlers are designed for living aboard, but the R-27 really shines as a vacation boat. Tugs typically have an abbreviated rear deck that maximizes interior living space, but the R-27 has a large aft deck that makes it fishing-ready, especially the Northwest Edition, which has downrigger plugs and pads. But it also works for social gatherings thanks to twin fold-down bench seats and a convertible dining seat that faces aft. The front half of the convertible dining seat flips forward to create a doublewide helm chair. The inward side of the teak dining table flips up to conserve space when it’s not in use and reveals a grabrail and cupholders. The table also drops down to create a berth. The forward V-berth is the master, and there’s even an amidships sleeping quarters that will be the kid’s cave.

The bow houses a settee and a table.

Lower the bow table, add a filler cushion, and you have a berth.

Add the extra wow factor of a stern electric grill, and parties take on an extra dimension. The grill is easy to remove when not in use and reveals a large insulated cooler that can be converted to a livewell. A standard popup ski tow will likely see heavy use, and the rear swim platform is large and well-suited for watersports staging. Topside is a rack that can hold kayaks or standup paddleboards.

When not in use, the grill lifts out to reveal an insulated cooler that can be converted to a livewell.

Ranger Tugs couldn’t have made the choice easier when it comes to equipping the R-27. Buyers have two choices that are largely based on their geographic whereabouts. The Northwest Edition ($199,937) is, as its name implies, for cooler climes, such as the area where they are built near Seattle. In addition to the aforementioned downriggers, which are useful for targeting salmon and halibut, this version includes a diesel forced-air furnace. The Luxury Edition ($214,937) includes a 2.5 kw gas generator, air conditioning and reverse-cycle heat.

With all of the seating folded away, the cockpit is ready for fishing action. It’s also a good spot for watersports participants to sit and dry after a run or two.

A look at the standard equipment list should explain the prices, as both versions are absolutely loaded with features; owners can go cruising the day they take delivery without checking a single option box. The list of big items that are usually options includes a windlass complete with an anchor, chain and line; a yacht-like standup head compartment with a vessel sink, a hot shower and an electric head; a 2,000-watt inverter and a six-speaker Fusion stereo with zone control. The galley includes a propane stove and oven with two tanks, a refrigerator/freezer, plenty of food prep space, a sink and storage. To make the dream of cruising any place, anytime a reality, one need only add a triple-axle Float-On aluminum trailer for $13,670.

We would have liked a slightly wider walkaround and a grabrail by the head compartment.

We’ve always owned smaller runabouts but wanted something larger that was suitable for cruising. We took several sea trials on other boats up to 33 feet long, but when it rained or the seas got choppy, we got wet. We love the fact we don’t have to scramble to put up any canvas. And when it gets hot, we can turn on the air conditioning. Despite being larger than our other boats, the R-27 is really easy to handle. Where we dock our boat is really tight, but the bow thruster allows us to spin it easily. When we’re cruising through a no-wake zone in the Intracoastal with other tug-style boats, it’s really fun at the end to put ours on plane and leave them in our wake; I think it surprises them. This boat attracts a lot of attention and Veronica is always giving tours to other people. We hope to cruise to the Bahamas or even tow it up north to Connecticut where we used to live. Rob at Pocket Yachts treats us like family. We can call him anytime and he always helps us out.