The Ranger Z519 features the size, style and performance to run with the big dogs … without the big-dog price tag. 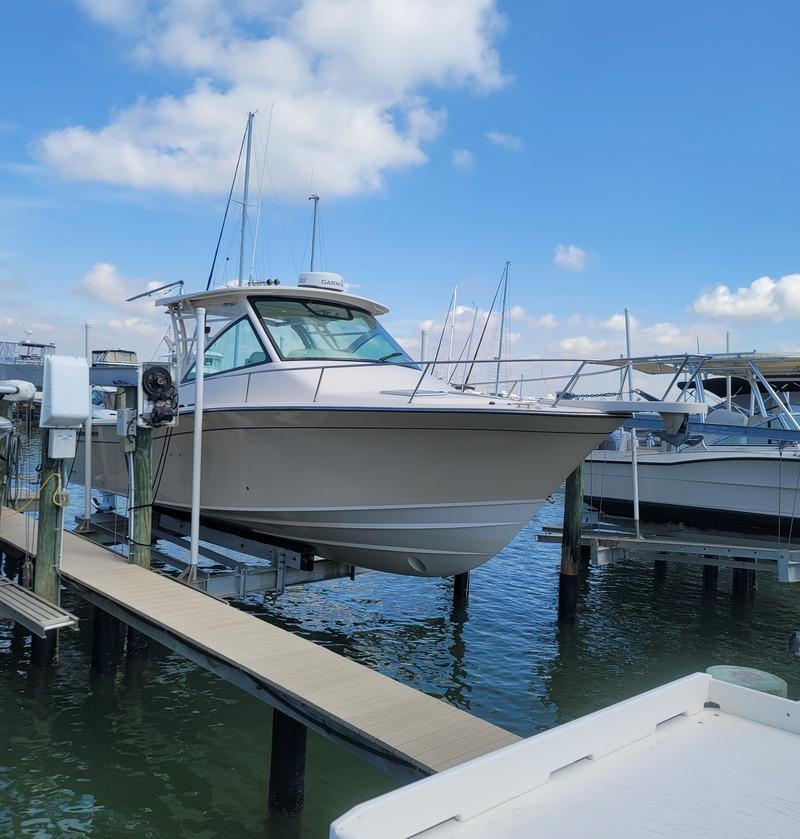 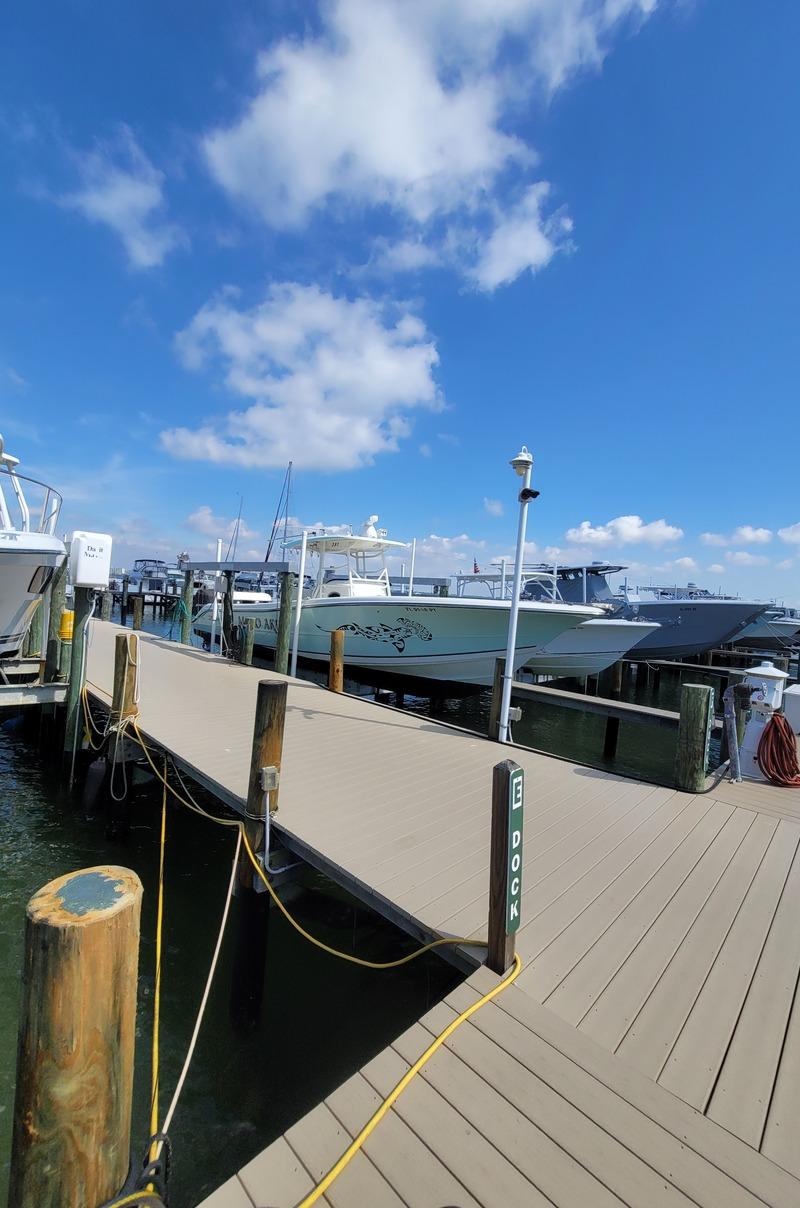 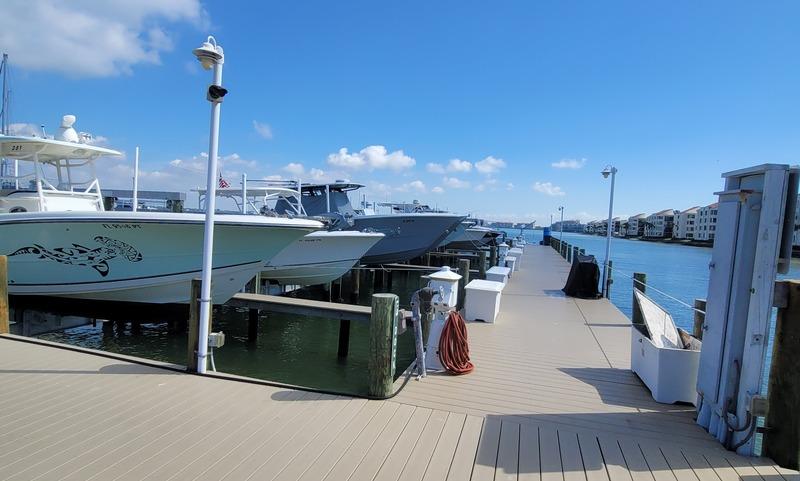 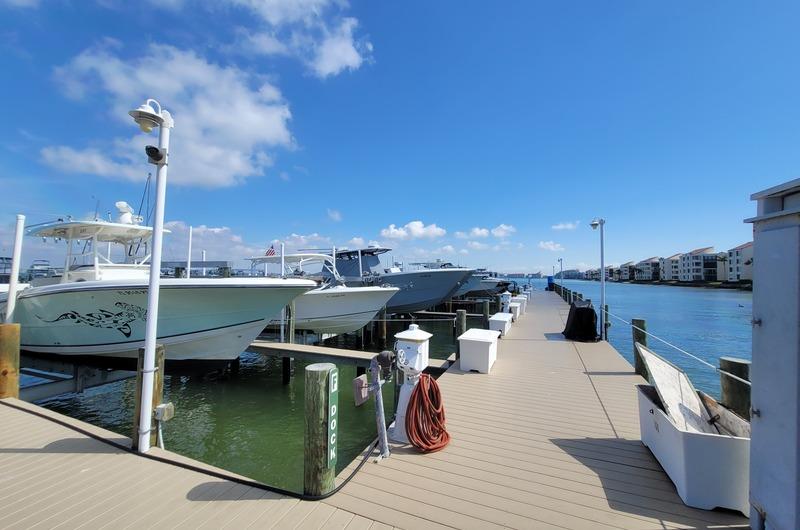 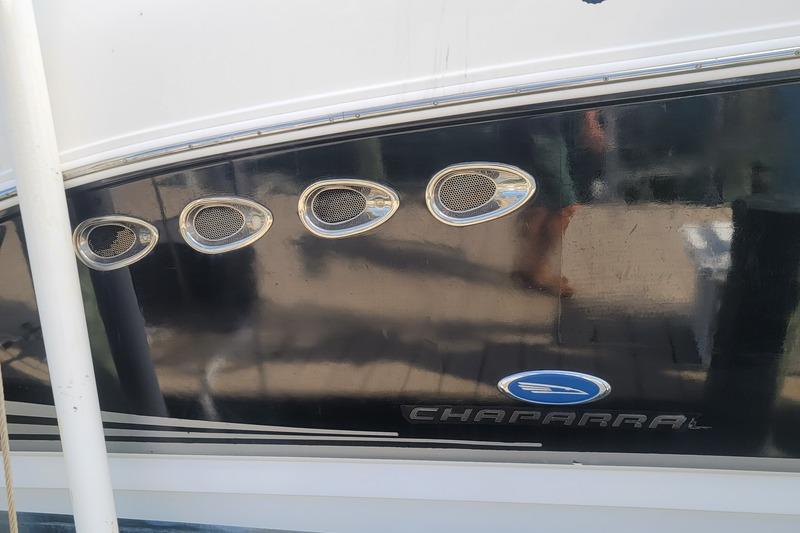 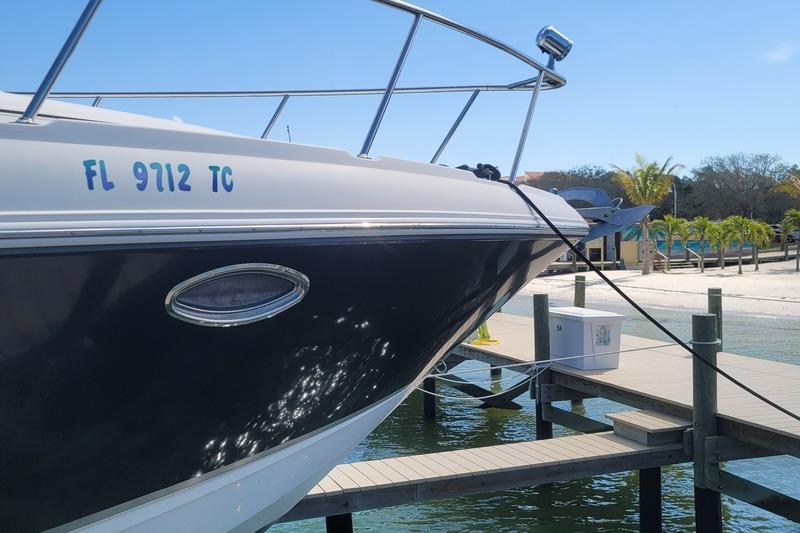 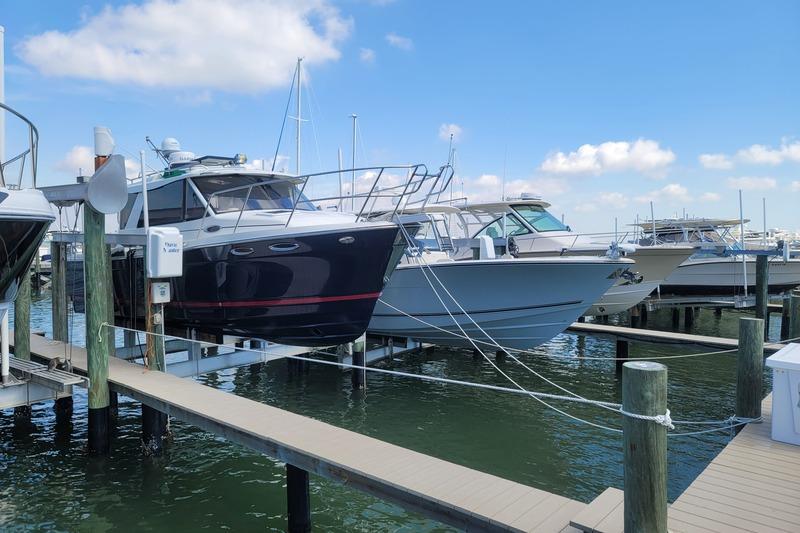 Many avid bass anglers spend most of their leisure time either fishing or watching the pros go strike for strike in events such as the Bassmaster Classic. For them, competing in local tournaments is as close as they can get to emulating their fishing heroes. But even then a little thing called reality rears its ugly head and forces them to settle for a boat within their budget, and it may lack the performance and panache they crave. Sure, they can get out on the water in an aluminum model or one of the B-brand boats at a lower price, but for many bassers the gold standard is a fiberglass Ranger capable of hitting speeds faster than 70 mph.

Guess what? The Ranger Z519 just checked all the boxes, with a price that starts at $50,095 with a 225 hp Mercury FourStroke outboard engine. That price includes a custom Ranger Trail trailer that has fiberglass fenders with steps, hydraulic surge disc brakes, aluminum sport wheels and the Cool Hub lubrication system.

The first thing I’m sure many people will do after they see the price is visit the Ranger Boats website to find out what the Ranger Z519 is missing. There has to be a catch, right? Not really, except for an electronics package that needs an upgrade. This is a pro-style bass boat that no one will confuse with a budget boat. It’s about a Vienna sausage short of 20 feet long and has a front casting deck with enough room for a pair of XL anglers.

Bow anglers have access to a recessed foot control, a Minn Kota motor and up to a 12-inch MFD.

The Ranger Z519 was completely upgraded for 2019 with items such as new consoles and seats. Our test boat’s optional portside console ($1,049) featured twin stainless steel grabrails for the passengers and a huge glovebox with a charging station for electronic goodies. The driver’s console was the same one found on Ranger’s higher-end models and featured a pair of matte-black accent grills and plenty of room for electronics up to 16 inches, though Ranger only offers Garmin and Lowrance options to 12 inches and Humminbird up to 10 inches.

Drivers get the same console higher-end Ranger owners get.

A pair of upgraded extra-wide SRS bucket seats augmented with a suspension system give the Ranger Z519 a soft ride when the going gets rough. In between is a center chair whose seatback flips down to double as a step-up to the ample rear deck.

A suspension system gives the bucket seats a smooth ride.

Our test boat was rigged with the new Mercury Pro XS 225, a V-8 that has a displacement of 4.6L and some extra attitude. Turning the key results in a macho growl caused by the engine having one muffler instead of the usual two. And this rig is quick. Lots of bass boats are a little slow out of the hole no matter how much power they have, thanks to a point-the-bow-at-the-sky bowrise, but the Ranger Z519 pops a medium “wheelie” and hooks up fast. Our test boat’s bow dropped down in just 2.2 seconds, and it passed 30 mph in 6.3 seconds and reached a top speed of 70.4 mph, just cracking the magic number that delineates serious bass boats from the rest.

Mercury power is standard on Ranger boats, and a Prox XS 225 is worth the upgrade.

Ranger Boats was acquired by Bass Pro Shops in 2014, and its boats — Nitro, Tracker, Mako and Regency — all have Mercury outboards. But the parent company has, more or less, let Ranger operate as an independent entity with its own dealer network, so in addition to Mercury, buyers can choose Yamaha and Evinrude engines.

With the upgraded Mercury V-8 Pro XS 225, the price is $51,595. That represents a $1,500 upcharge over a V-6 Mercury FourStroke 225 but is totally worth it for two reasons. First is the extra torque provided by having two more cylinders; second is different engine mapping that allows it to reach 6200 rpm rather than the FourStroke’s 6000 rpm. The Evinrude option is the E-TEC G2 225 HP direct-injected two-stroke, which pushes the overall price to $55,595, making it the most expensive of the 225s offered, but it has an integrated power steering system and can be winterized in minutes with the push of a button. With Yamaha, Ranger broadens the range of power to include an F175, which drops the overall price to $47,395, and an F200 ($50,595), but 225 hp is the way to go, and the F225 bumps the price to $51,995.

The Ranger Z519’s 8-foot, 1-inch beam is only an inch narrower than the flagship Z521, which is nearly two feet longer. That beam gives it plenty of stability at rest and at slow speeds. On plane, it didn’t feel precariously balanced on its delta pad like some bass boats I’ve tested, which should give the driver the confidence to seek that extra bit of speed. On test day on Table Rock Lake, near Branson, Mo., the wind was up and there was a steep 1- to 2-foot chop, but the Z519 had little trouble skipping over the top with total control. With the trim down, I could crank it in a hard turn without it losing its grip. And its sub-20-foot length made it feel more nimble than larger bass boats.

The standard split livewell has multiple pumps and holds 26 gallons of water, five less than the Z521L. Up front is a standard Minn Kota Maxxum 80 24v trolling motor with a recessed foot control. Two massive storage compartments set into the foredeck feature 18 rod tubes between them and plenty of room for an embarrassing number of 3700-series Plano tackle boxes. A smaller compartment on the starboard side is perfect for life jackets and a Coast Guard kit, and a cooler set into the deck just in front of the helm has an elevated shelf to keep sandwiches dry. A second cooler resides under the step-up to the foredeck.

A fold-down SRS seat is a comfy way to fish.

With an optional ski tow ($567), the crew can engage in watersports when the fishing is slow, although skier-spotting on a bass boat is a bit tricky, since all three seats face forward.

Buyers who check a lot of boxes on the options list can easily blow up the bottom line, but anglers can trick out the Z519 without doing so. The fi rst step is an electronics upgrade. The boat comes with a single Lowrance Hook2 5-inch screen, in a space designed for up to a 16-inch fishfinder/chartplotter, and nothing at the bow on a panel that can hold up to a 12-incher. These spaces are crying out for at least a 12-inch screen at the helm and a 9-incher at the bow, and Ranger offers the Lowrance Elite 12-inch and 9-inch models for $2,141 and $1,263, respectively.

The helm can accommodate a 16-inch screen.

Also, the livewell doesn’t come with a pumpout, which can be remedied for $91. Anglers who need a soundtrack while fishing can add a Bluetooth Infinity stereo for $561. For $1,440, the standard trolling motor can be upgraded to a Minn Kota Ultrex 80 MDI that includes iPilot, which features a virtual anchor and can be programmed to follow contours on a chartplotter. All decked out with a Mercury V-8 225 Pro XS and the aforementioned options, the price comes to $57,091. 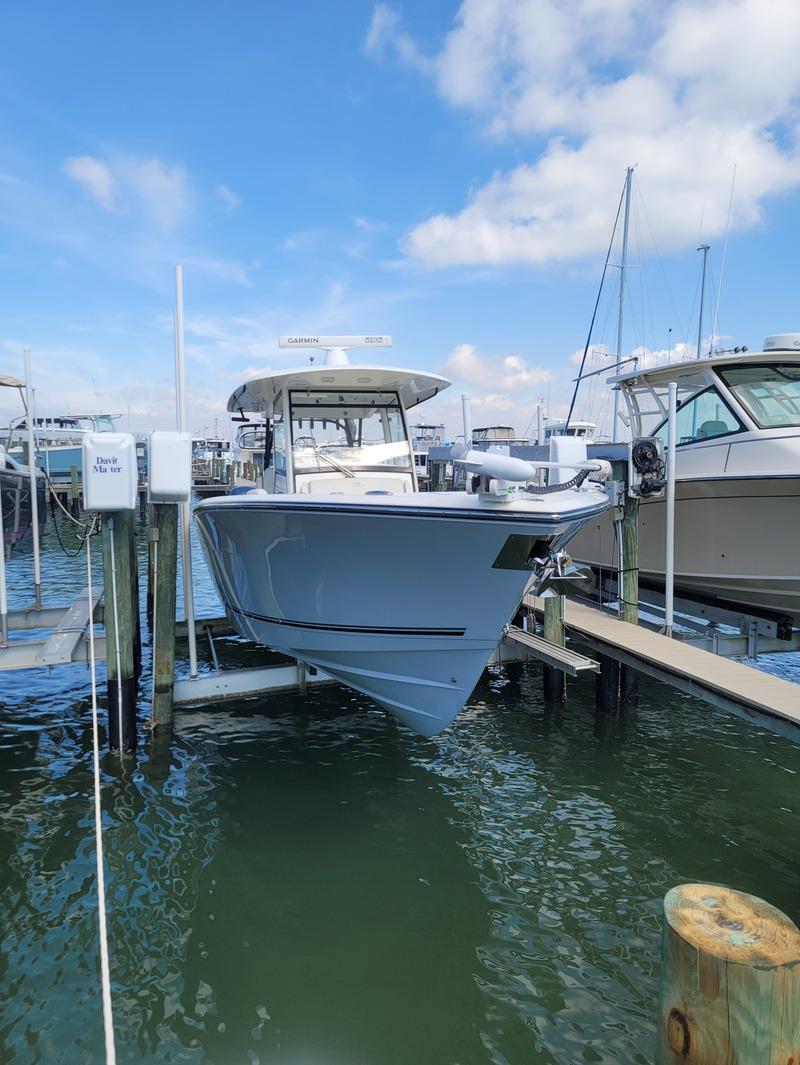 I have a 12-inch display at the helm but wouldn’t mind upgrading to a 15-incher, since there’s room.

I’ve owned a number of boats, mostly for bass fishing, but my last three have been Rangers. I think they are a quality boat and love their performance. I owned the larger Z520, which a lot of pro anglers use, but when I asked Steve, the owner of Knox Marine, to recommend a new boat for me, he said I should get the less expensive Z519. He said it met my needs better, and he took me out fishing on his personal Z519 to prove it. The smaller size makes it lighter, faster and more agile, plus it fits in my garage, which is great. I fish most of the time in Ohio, but I also take it to my other house in Ocala, Fla., in the winter. I’ve fished on some big lakes, including Chickamauga Lake and Kentucky Lake, and have gotten into some rough water, but the Z519 handled it well. I’ve bought boats from a lot of different dealers but the folks at Knox Marine are the best group of guys I’ve ever worked with. They all fish and are very experienced, and they’re even open on Sundays in season.