My first experience with air conditioning on an open boat was aboard a Scout 350 center console. We were escorting a gaggle of PWCs to Bimini on a hot July day in 6-foot seas, so the going was slow. And we were traveling with the wind, so we weren’t generating much of a net breeze. When the boat owner asked if I wanted AC, I thought he was kidding, but when he turned it on, I directed a cockpit vent onto my face. It was 5,000 Btu of pure bliss. The downside was that his Marvair system required a dedicated bank of batteries, and before we arrived he said he had to shut it down, because the batteries were getting low.

When most people think of boat air conditioning, they picture cabin cruisers with generators, which can get pricey. The concept of air-conditioning for open boats such as center consoles is a relatively new one, and while it seems counterintuitive to blast cold air into the great outdoors, AC is a great addition to hot-weather boating. Same goes for open-air heating. Anyone who’s done April waterskiing in Wisconsin with a boat such as a MasterCraft X24 will understand the pleasure of plunging a hot-air hose under his shirt after a chilly run. But these $1,120 units don’t provide relief from the heat.

Sometimes great ideas happen during a moment of serendipity, as was the case with Breeze by Webasto, the brainchild of Christophe Lavigne, Group Beneteau’s president of U.S. Brands. He was driving his Mini Cooper convertible on a hot day, he had the top down and the AC cranking, and he was struck by a thought: Why can’t we do this with boats? So a few years ago he contacted representatives from Webasto (webasto.com), an industry leader in marine air conditioning. They said they needed to involve an engine partner in such a system’s development, so they brought Volvo Penta into the huddle to see if together they could come up with a viable system. They did.

At a Group Beneteau press event last year in Sarasota, I got to see the first boat with the new system, a Four Winns HD 270 deckboat that offered Breeze with both AC and heat as a $6,600 option. And it’s powerful. When the boat’s engine is at idle, Breeze produces a respectable 7,000 Btu, but at higher rpm it can crank out 30,000 Btu of comfort.

It’s not like they had to start from scratch; the first factory-installed air conditioning for cars was introduced on a 1940 Packard and the basic concept remains the same. Designing a reliable system for the rigors of the marine world, however, is more demanding. Because this electrical system is in an enclosed gas engine compartment, it is ignition-protected, adhering to ISO 8846 regulations, which is the marine-industry standard used to prevent explosions. And to counter corrosion, all materials are marine grade and seawater resistant. 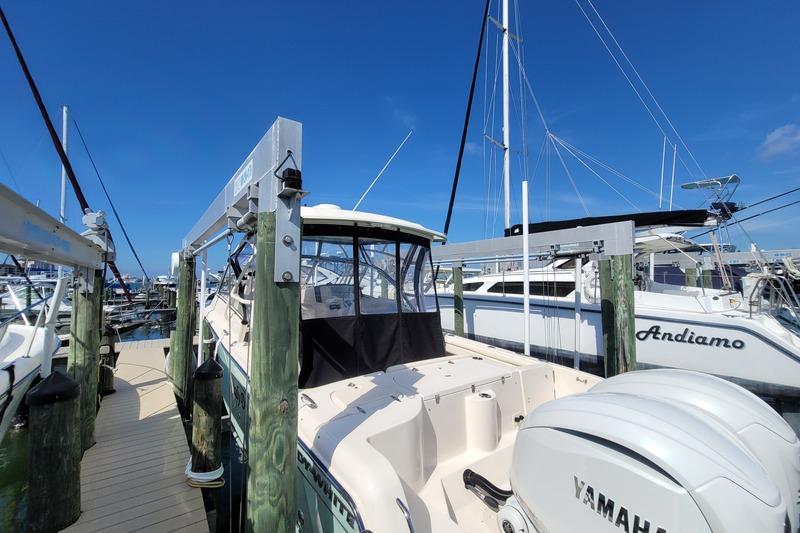 So far, Volvo Penta is only offering Breeze on V8-350 sterndrives, and as of press time it is only available on the Four Winns HD 270 and Cobalt’s new A29. The system starts with a belt-driven compressor, which initiates the “high side” of the system by compressing the R134a refrigerant into a high-pressure gaseous state and then sends it to the condenser, which is the part of Breeze that is most different from an automobile AC unit. The condenser on a car resides under the hood and gets plenty of air flow, so it is air cooled, but because the Volvo Penta engine resides in a closed compartment, Breeze uses a 12v DC pump to circulate sea water through the condenser coil, which helps evacuate the heat from the refrigerant where it becomes a high-pressure liquid.

After it exits the condenser, the liquid refrigerant passes through a filter dryer that contains a desiccant that filters the refrigerant and removes any water, because water could cause ice crystals to form and damage the system. From there, the refrigerant flows into a thermal expansion valve (TXV) where it becomes a gas again on the “low side” of the system. The gas then flows to an evaporator — installed near the helm — that absorbs heat passing through its evaporator fins and leaves cooler air behind. A fan blowing over the evaporator directs the cold air into the cockpit via strategically placed vents. The gaseous refrigerant in the system then travels back to the compressor where it repeats the cycle.

To provide heat, Breeze uses a special evaporator that has two heat exchangers: one for the refrigerant and one for the hot coolant from the Volvo Penta engine’s closed cooling system (it resembles a radiator). Breeze’s simple control system has an on/off switch, a dial to control temperature and a three-speed fan control. Activating the heat is as simple as turning the thermostat into the red zone, at which point a 12v DC valve connected to the coolant line opens and lets the hot coolant from the engine flow into the heat exchanger at the helm. The coolant then flows back to the engine’s coolant sub tank.

Not only does Breeze by Webasto provide relief from the heat, but it can actually extend boating season with its heating feature, particularly on a boat with a full Isinglass enclosure.