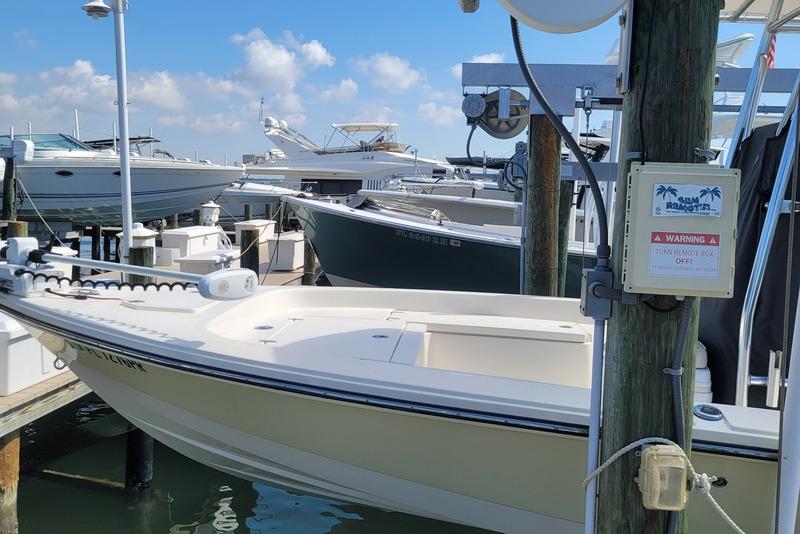 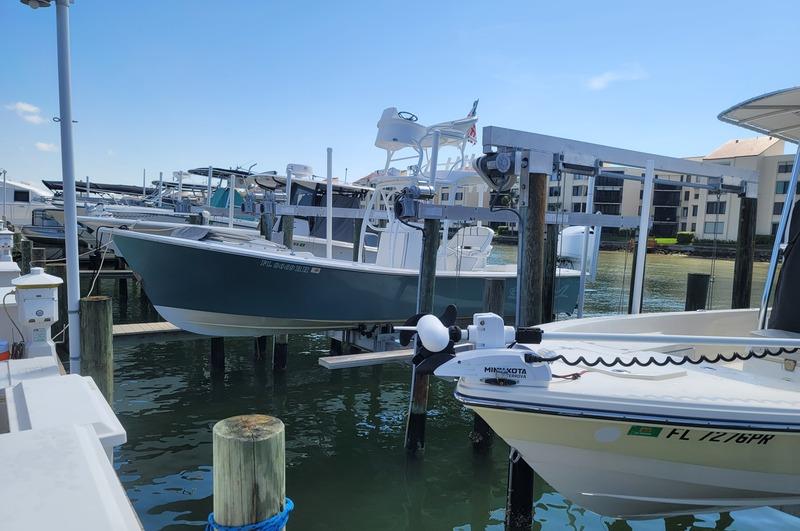 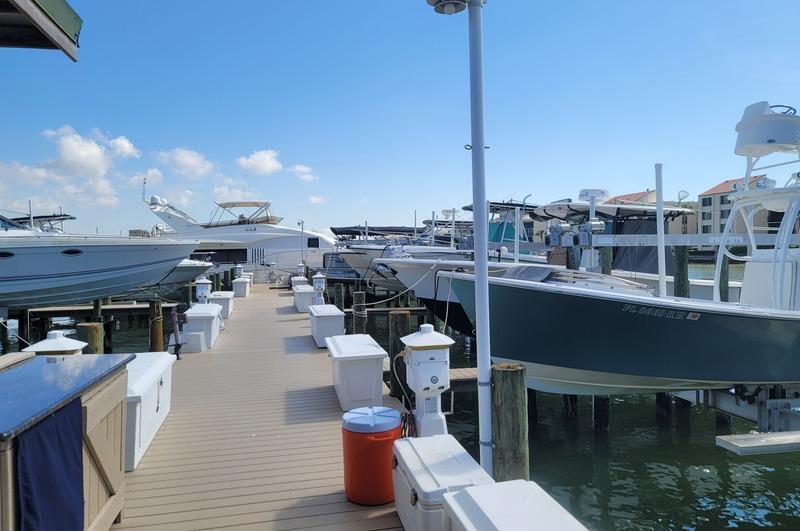 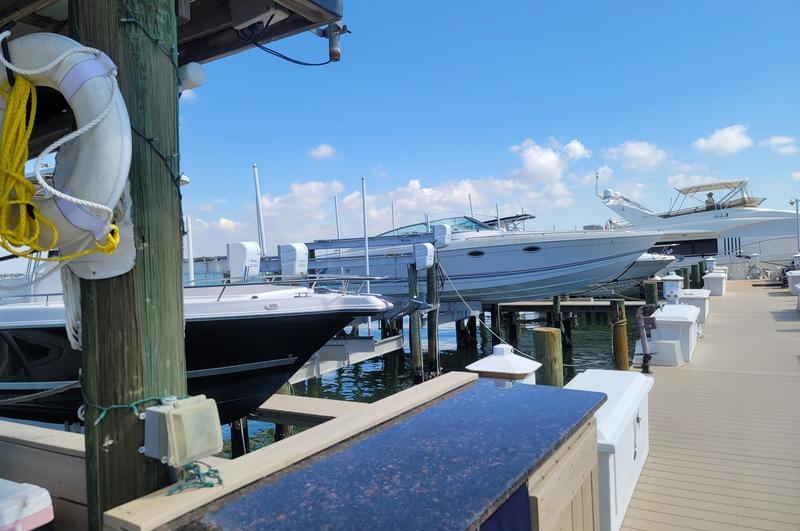 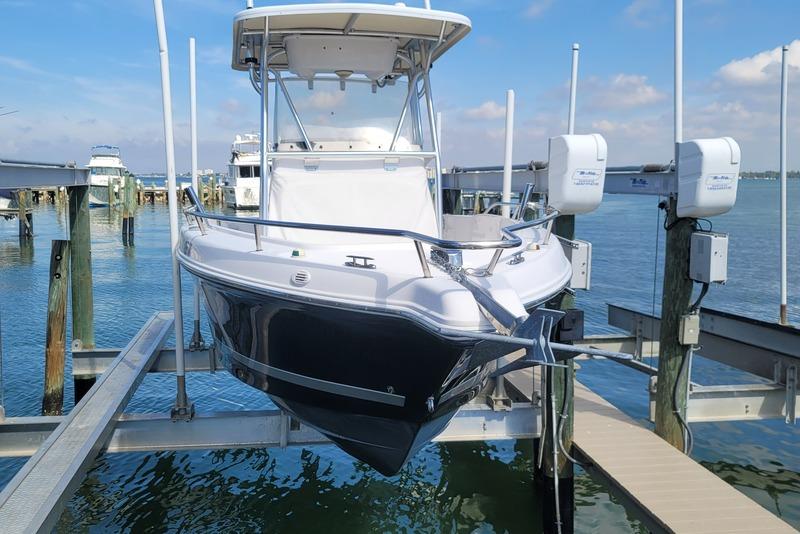 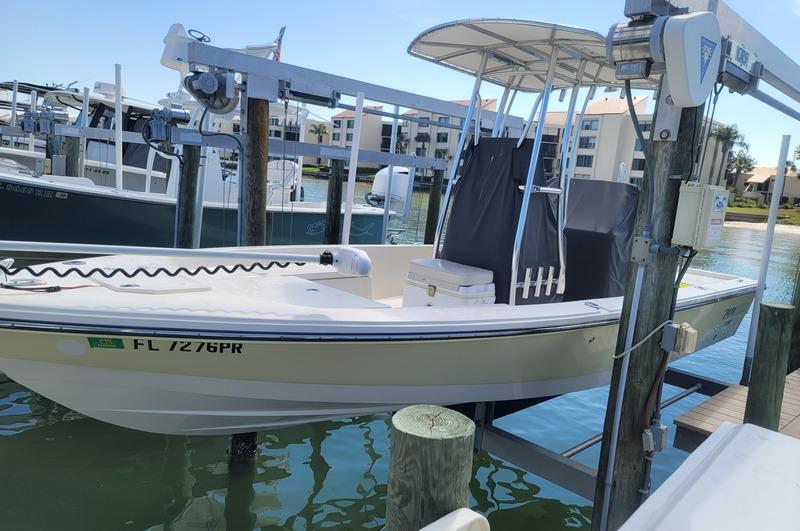 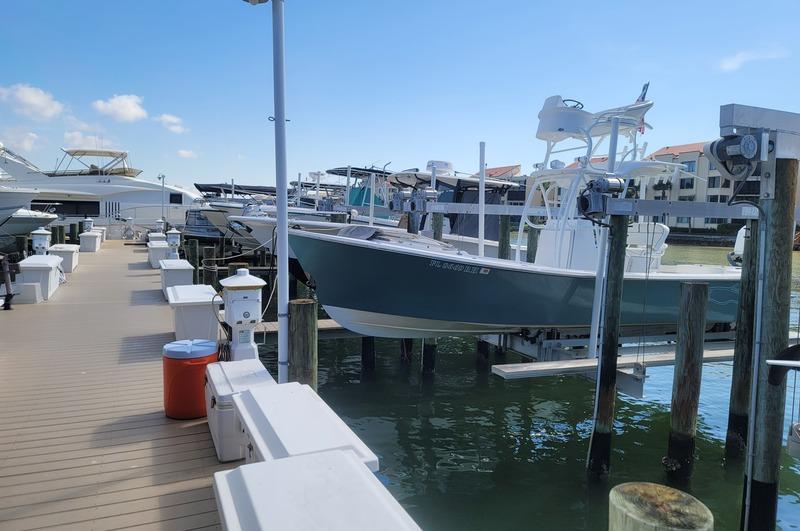 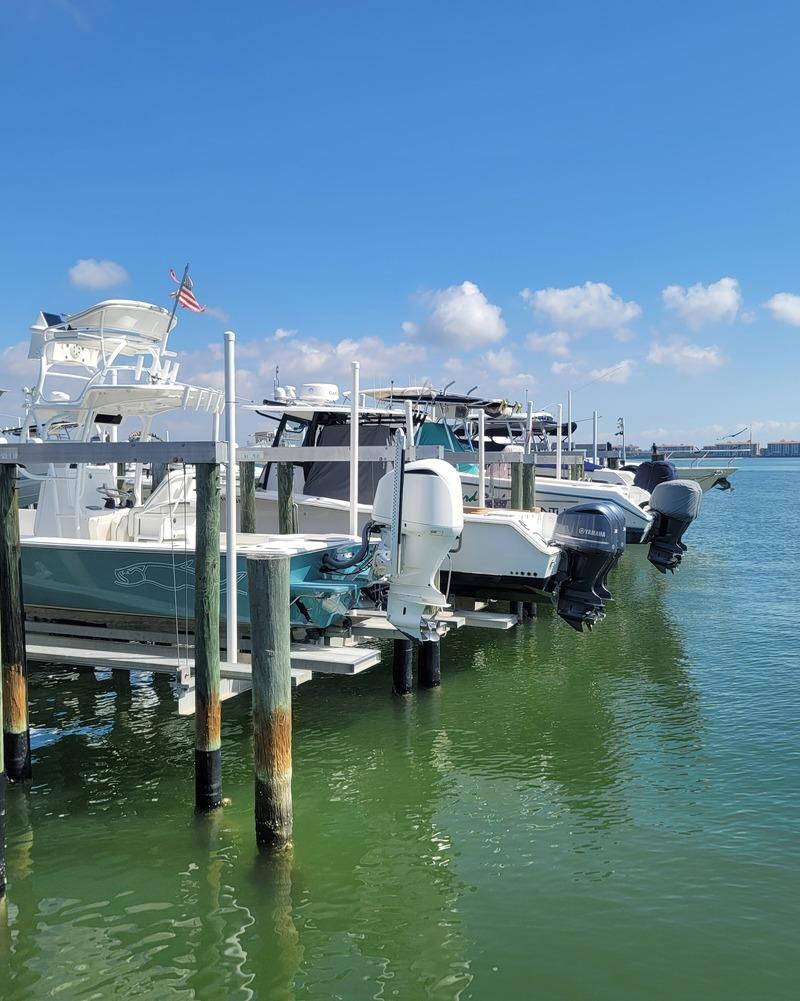 I can usually step on a fishing boat and immediately tell whether the designer was actually an angler or just tried to decide what he thought fishermen want and need based on what he saw on a computer screen aided by CAD software. In the case of the new Stingray 216CC, there’s no doubt lead engineer Drew Gantt walks the walk, since he has been a mate on an inshore/offshore charter boat for five years, fishing the waters around Myrtle Beach.

Eight rod holders set into the gunwales are the first clue this boat was designed by an angler. Add to those four more at the stern and four behind the leaning post. Oh, and six more in the optional fiberglass T-top ($7,614) our test boat had. And that’s not even counting the four under-gunwale horizontal racks. Even more telling are 11 Yeti-compatible cupholders, including four set into the gunwale and two at the stern where anglers can fish and hydrate without having to relocate.

Last year Stingray unveiled the 236CC, its fishing flagship that’s exactly two feet longer than the 216CC but has the same 8-foot, 5-inch beam. I’m going to call it “Stingray math,” because it took me a while to figure out where that two feet of length went. I assumed the head compartment inside the console would be the first casualty, but the console is exactly the same, including a slide-out portable toilet ($314) that conserves space and helps make the boat family friendly. The cockpit is also the same and has the same four-abreast stern seats that include two extra-tall flip-up backrests for the outer jumpseats, which will be the best seats in the house during a run in the chop.

Extra-tall flip-up backrests create a couple of comfortable jumpseats on the transom.

It took me a while to figure out the bow is the area that’s different. There is still an in-floor storage compartment whose bucket is perfect for storing a cast net, and twin bowriding seats that hide fishboxes that are nearly the same size as on the 236CC. What’s different is the lack of a step up to the bow casting platform and the repositioning of the anchor locker. I didn’t see it as a standard or an option, but there’s a lip between the two bowrider seats that would be perfect for securely holding a fabricated piece of Starboard that would turn the area into a large, one-level casting platform nearly as expansive as the one found on its big brother.

Perhaps the most unusual feature on Stingray’s three center console models longer than 20 feet is the pair of triangular amidships working surfaces perfect for cutting bait or making lunch — not at the same time, unless sandwiches that taste like cut mullet appeal to the crew. Under the starboard-side removable cover is a freshwater spigot for quick cleanups, and underneath is a tilt-out trashcan that’s easily accessed courtesy of a hole in the counter. To port are a pair of wire cupholders and underneath is a tilt-out tackle caddy that holds two Plano tackle boxes.

The Stingray 216CC uses the Z-Plane hull, which is a performance overachiever that allows Stingrays to typically be four to five mph faster than similarly sized boats. Despite a deep-V hull that features 21 degrees of deadrise, the Z-Plane design gives the 216CC plenty of lift, so its 21-foot, 8-inch length doesn’t need a lot of power to make it perform well. It’s rated for up to 200 hp but the Yamaha F150 our test boat had pushed it well. On plane in 2.5 seconds, the 216CC reached 30 mph in 7.5 seconds and hit a top speed of 45.3 mph.

The large center console helm is a blank slate for big-screen electronics.

On test day on Lake Robinson, just outside of Hartsville, S.C., where Stingrays are built, I was able to run another 216CC with a Suzuki 175 — top speed 47 mph — that is actually $1,043 less than the Yamaha F150. But even with the Yamaha, it still costs less than $50,000. To take it all the way to its full potential with 200 hp, buyers have a choice between Mercury, Yamaha and Suzuki power, which should allow the 216CC to at least scare 50 mph.

For added value, Stingray always includes a bundle of items that are often options with other brands. It’s called the Convenience Package and amounts to $3,662 of free goodies on this boat. Headlining this group are the standard trim tabs that normally cost $1,034. Trim tabs are especially useful on fishing boats because owners often end up with an asymmetrical load if they only fill one fishbox with ice and fish. On rough, windy days, passengers tend to huddle cowardly on one side (guilty) to stay dry, which can cause a boat to list if tabs aren’t present. They are also useful for getting a heavily loaded boat on plane quickly and keeping it on plane at slower speeds. With a light load and only two people, our Stingray 216CC had little bowrise out of the hole. It hooked up well in corners and, thanks to the mandatory hydraulic steering, it was easy to drive.

Under the leaning post, a 74-quart Engel cooler can house a full day of food and beverages.

Unlike the 212SC, which is one of Stingray’s deckboat models that can be optioned with a fishing package, the 216CC is designed primarily with fishing in mind, but that’s not to say it doesn’t have a strong dash of family friendliness. The bowrider chaise lounges up front come with standard cushions, and the foam on all of the seats is thicker and softer. It has a passenger capacity of 10 people, and there’s plenty of seating for everyone.

Storing beverages and food isn’t an issue either. A standard 74-quart Engel cooler resides under the leaning post, and another cooler hides under the doublewide jumpseat bottom in the front console. Friction hinges keep its lid open when necessary, and it can be converted to a 17-gallon livewell ($443) to complement the standard 14-gallon stern livewell under the rear bench seat bottom.

Concealed beneath the bench seat between the jumpseats are a livewell and a fishbox.

To boost its entertainment quotient, the standard Fusion stereo can be bumped to a massive 1,400-watt Fusion system that employs it new Signature speakers ($2,383) and includes a blue LED lighting package. If the fishing’s off, skiing and tubing are available activities thanks to the optional, removable ski pylon ($517).

For many years, Stingray was synonymous with white hulls, and buyers can still get the 216CC thusly clad, but for only $722 they can choose one of six vivid hull colors, including the Ice Blue on our test boat. The large center console is a blank slate for big-screen electronics, and Stingray doesn’t choose a brand for buyers. Our boat had a Yamaha Command Link gauge ($922) whose wealth of information includes fuel flow info, so operators can make the most out of every gallon in the generous 57-gallon tank.

The captain and a companion have a comfortable perch at the helm.

The standard leaning post doesn’t have flip-up bolsters, but that can be remedied for $460. The optional fiberglass T-top has an electronics box and the tubular mounts are off the deck, so passengers walking around the console won’t stub a toe. Buyers can opt for a $1,171 Bimini top instead or go with a canvas T-top for $4,616. To add more fishing capability to the 216CC, especially for inshore angers, buyers can add a bow fishing seat ($371) and a pre-rig for a trolling motor of choice ($366). 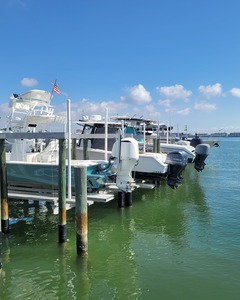 We got the 9-inch Simrad display but should have upgraded to the 12-incher, since there’s plenty of room for it.

My wife and I, along with our three boys, Brandon, 12, Brody, 10, and Braxton, 6, love boating and have owned several different types of boats, but the Stingray 2166CC is one of the most versatile boats I’ve ever seen. We love to fish for flounder, trout and redfish, and if it’s nice we can go out of the inlet to fish
the Three-Mile Buoy Reef for black sea bass. Despite not being a huge boat, the 216CC takes waves really well thanks to its 20-degree deadrise and high freeboard. The boys like to go tubing and wakeboarding, and the Yamaha F150 has the power to handle it. We like to go to The Point, which is a local gathering for boaters, drop the anchor, wade around and socialize. When we want to get off
on our own, we can beach it on one of the numerous sandy beaches on the Intracoastal Waterway, and when we get hungry, we head to the Dead Dog Saloon. The folks at Marine Service Center are great. If I need anything, I can call Zack and he immediately gets on it to help us.